It’s the de-facto homecoming in a lot of ways. That’s the game that everyone wants to come back for.

Few fans are quite as dedicated to the Lehigh football team as Bayer. Bayer has been to a total of 78 Lehigh-Lafayette games, the most rivalry games attended by anyone to date.

Bayer went to his two first Lehigh-Lafayette games in 1943 with his father, Curtis F. Bayer. Bayer Sr. was a Lehigh graduate of 1935.

“He was a very active supporter and loved football,” said Bayer. Together, Bayer and his father supported Lehigh at each rivalry game starting in 1943. 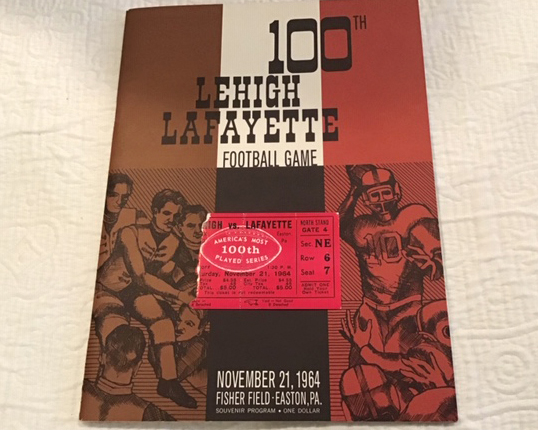 A game program and ticket stub from the 100th meeting between Lehigh and Lafayette on Nov. 21, 1964.

There is little Bayer wouldn’t do to attend a Lehigh-Lafayette game. He described one particular game he went through “holy heck” to get to.

After graduating Lehigh in ’59, Bayer was in basic training for the Army. Bayer said that in that time, almost all men had to enter the military in some shape or form.

The weekend of the 1959 rivalry game, he was going through basic training in Fort Dix, N.J. He and his fellow soldiers had to take a physical test that Saturday.

“I won the thing,” Bayer said.

His sergeant gave him the rest of the weekend off as a reward. And Bayer knew exactly where he wanted to be.

At the time, Bayer’s fiance was attending a college in Philadelphia.

The couple arrived late in the fourth quarter.

“I never dreamed I’d make it there that weekend,” Bayer said.

Like Bayer, Shigo’s grandfather, John Joseph Shigo, was also a Lehigh graduate and attended more than his share of Lehigh-Lafayette games.

A Lehigh graduate of ’24, Shigo’s grandfather supported Lehigh at 58 separate games, including the four rivalry games Shigo played in. 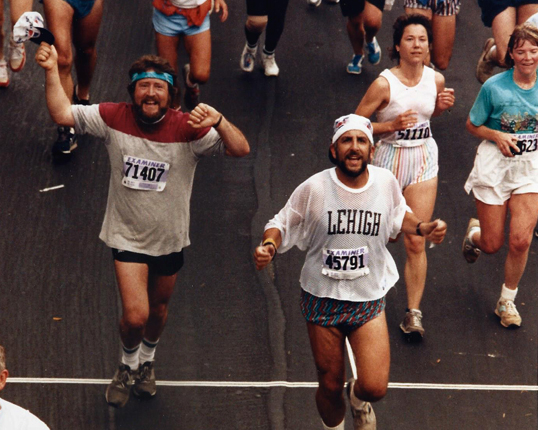 In 1970, Kaufman moved to San Francisco. He said that in select locations across the country, alumni could listen to a broadcast of the game over speakerphone and explained that Lafayette alumni were often invited to such gatherings too.

“I remember the first time going to an older alum's house—there might have been 15 couples there—and they had food and different speakerphones around the house,” Kaufman said.

Throughout his years on the West Coast, Kaufman never found it too difficult to tune into the big game and he emphasized that there was rivalry energy all over the country.

“San Francisco, L.A., St. Louis, it didn’t matter,” he said. “We had to sustain that spirit without being there live.”

As time drew on, Kaufman was eventually able to attend viewings at sports bars, where Lehigh-Lafayette fans would input satellite coordinates to stream the game onto TV displays.

Kaufman now lives in the Lehigh Valley area and is often able to attend games in person.

Rieker lives in Whitehall, Pa., and also makes it over to many games. He tries to attend at least three home games a year.

The football alumni usually have a large tailgate, Rieker explained, so word gets out about where to meet up.

“The Lehigh-Lafayette game specifically really makes for a good chance to bump into someone you played with 20, 40 years ago. The stories may be elaborated a bit,” he said. “But it’s still fun to relate to a guy that lived through that time with you.”