Lehigh-Lafayette week was crazy. The game had playoff implications...it was a big deal.

In his first-year game against Lafayette, John Shigo ’84, Lehigh Athletics Hall of Famer, said he was lucky to get game time as a younger player, entering halfway through the third quarter. The moment he remembers the most involved the goalposts. 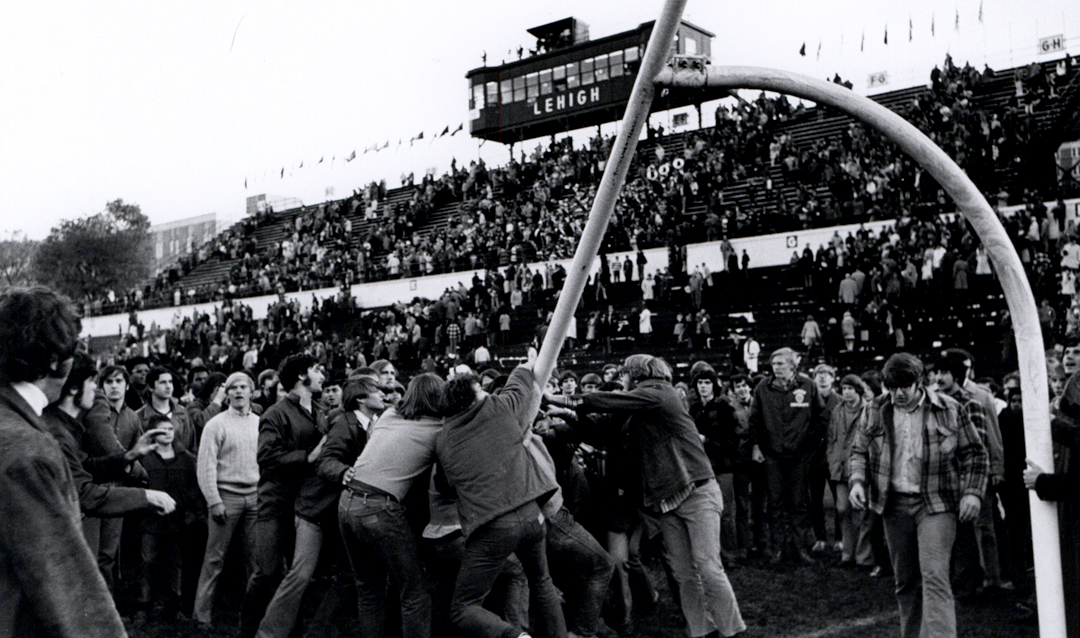 Fans celebrate by tearing down a goalpost at Lehigh’s old Taylor Stadium. This tradition ended in 1991 when both schools installed steel goalposts sunk in concrete.

“I remember getting on the field, turning around, and seeing people I knew storming across the field to go tear down the goalposts,” Shigo said.

Rieker has similar memories, particularly from his first year. Rieker said that in the mayhem, pieces of wood from the goalposts floated amongst the student body.

Tearing down the opposing team’s posts was a long-standing tradition for both Lehigh and Lafayette students.

Dan Bayer ’59 recalled such chaos when he attended Lehigh.

“Often it was the freshmen class who were challenged to save the goalpost,” he explained.

When Bayer attended Lehigh, the goalposts at the Lehigh-Lafayette games were two wooden posts with a wooden cross bar. He said students would break them up, hit each other with the pieces, and overall, wreak havoc.

“They were made to be broken,” said Shigo.

The New York Times reported that in 1991, administrators from both Lehigh and Lafayette installed steel goalposts sunk in concrete. This was in an effort to keep students off the field and prevent injuries.

Lehigh in the ’60s: “Things They Don’t Allow Today”

He reminisced about the fights that would break out after the game, how students would attempt to pull down the rival goalposts and the rowdy energy of the crowd.

Kaufman also pointed out that Lehigh students in the ’60s were all male. “It was a big deal whether you had a date [for the game] because there were no women on campus,” he said.

According to Kaufman, that isn’t the only difference between Lehigh now and then. In 1964, it was easy to feel immersed in school spirit.

“We didn’t have the distractions that students have today. There was no internet—life was fairly simple,” he said. Kaufman explained that back then, it was all about what was happening in the moment.

He pointed to the annual first-year pep rally as an example.

“When we went into Grace Hall, everyone was given a corn cob pipe and a pack of tobacco,” he said. “It was yelling, screaming, sweaty.”

The annual Rivalry-Week bonfire was another source of competitive energy.

When Kaufman attended Lehigh, the fire was held behind Taylor Gym. This was home to the football field, which today is located on Goodman campus. When the sun went down, Lafayette students would slip onto the field and attempt to start the fire or knock it down. 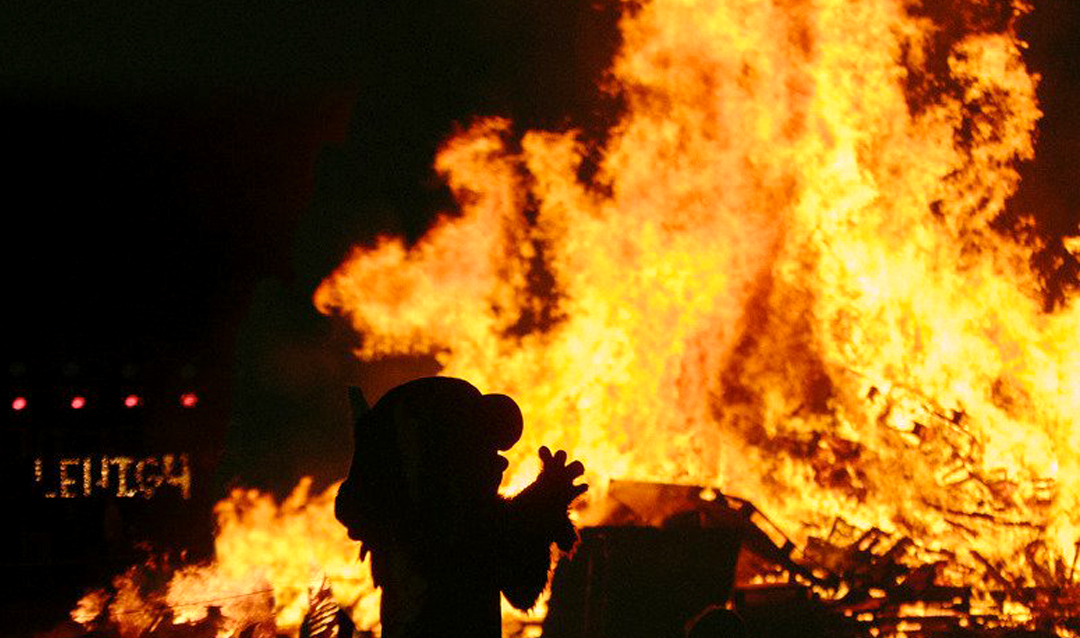 The Rivalry Week bonfire is a long-standing tradition. In the past, construction would begin a month in advance of the fire and students would defend the structure from Lafayette trying to light it early.

Bayer said that every year, Lehigh students would begin building the bonfire about a month in advance. They collected any wood scraps they could find, including old desks.

His senior year, in honor of the Class of ’59, they built the bonfire to 59 feet before lighting it. Lafayette, he said, did the same with their own bonfire.

According to Bayer, the fire wars became “very sophisticated” in the ’60s. He recalled one rare and extreme occasion.

“People that had access to a helicopter would get it and fly over trying to shoot flaming arrows down to set off the Lafayette bonfire ahead of time,” he said.

Kaufman ’68, said the clang of the touchdown bell alerted first-years that the fire was under siege. No matter the hour, students defended the bonfire with valor.

“Imagine every freshman in pajamas running across the quad to protect it. It was crazy, it built school spirit, it built class spirit,” he said.

Bayer said that it was also common for Lehigh and Lafayette students to “capture” students who tried to attack the fires. Students would “keep one of them and hold them until game day, maybe all week,” he said.

Rieker recalled several other contests such as bed races that built up energy for the Lehigh-Lafayette game. While the bonfire battles are no more, bed races are still very much a part of Rivalry Week.

According to The Brown and White, Lehigh’s annual bed races were rumored to have begun in 1967. 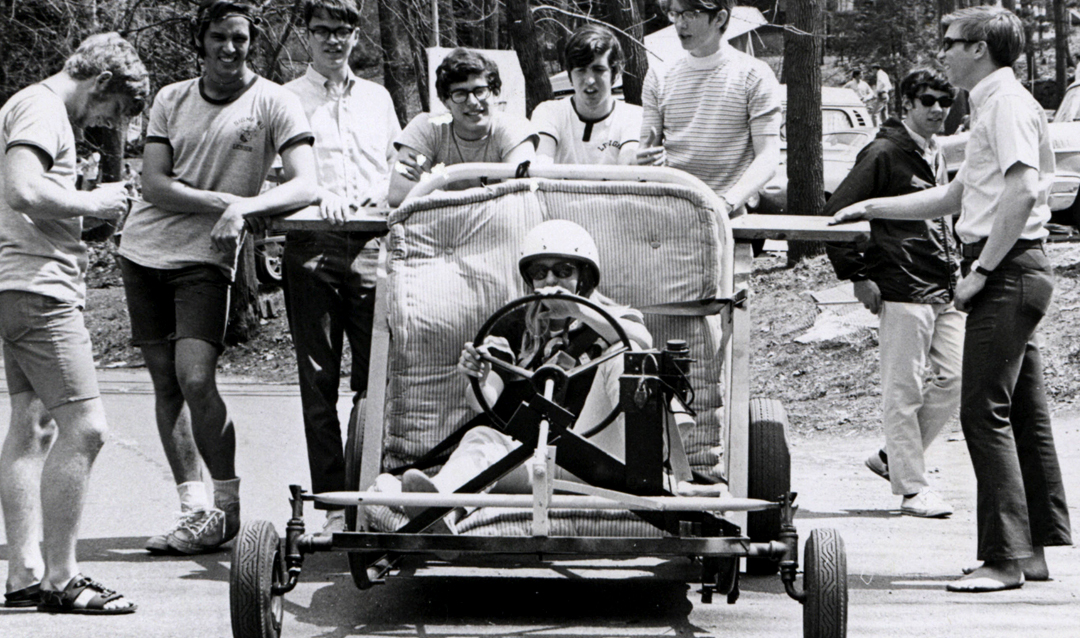 In one of Lehigh’s most treasured traditions, teams of students decorate beds and drag race them down the length of Memorial Walk during Rivalry Week.

During Rivalry Week, teams of five students each decorate bed frame “carts” and race them down Memorial Walk.

In the earlier days of Lehigh, students built their bed carts from scratch. This was in an effort to demonstrate their engineering skills.

Students today race in bed frames re-modeled for safety in 2014.

Yet another notable Lehigh-Lafayette week tradition is the impromptu appearances of Lehigh’s Marching 97.

In the week leading up to the Lafayette game, Lehigh’s marching band makes its way around campus, performing in classrooms, dining halls, fraternities and sorority houses, and libraries. They play traditional fight songs to fire up students and faculty alike, building school spirit before Lehigh and Lafayette’s meeting.

Lehigh University's Marching 97 is back with its annual Eco Flame, waking up sleepy-eyed students and getting campus pumped-up about the 151st rivalry game against Lafayette College.

Their march, “Eco Flame,” is named in honor of ’70s Professor Rich Aaronson, who requested that the band play during his ECO 001 class.

Shigo recalled the band’s surprise serenades throughout his time as a student and said they were “always a big part of the game.”

As noted by the Marching 97’s website, the band made their first appearance at a football game in 1907 and have been an integral part of spirit week since.

Of course, Rivalry Week would not be complete without bedsheet banners. Over the duration of Lehigh-Lafayette week, many students (literally) display their spirit for all to see. 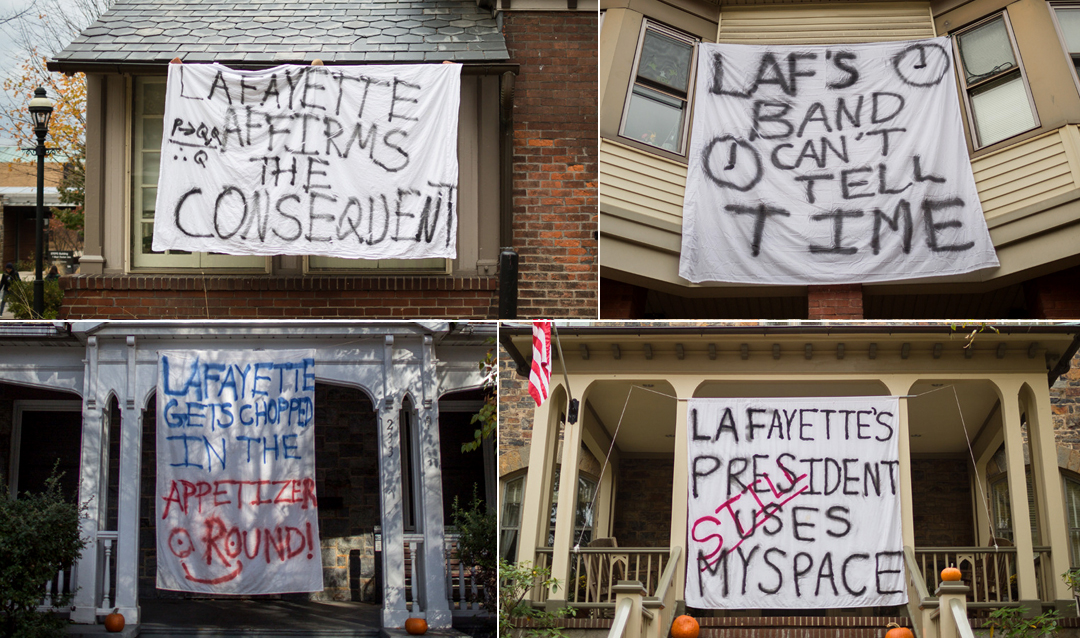 Another Rivalry Week tradition includes hanging banners with jokes about Lafayette around campus.

On a walk through campus, down frat row, or past off-campus student housing, one can see the many banners made to poke fun at Lafayette.

Students come up with witty jabs, spray paint them on large bed sheets and hang them from windows, roofs and porches.

There is something special about it. That spirit never leaves a Lehigh or a Lafayette football player.

Rieker said the school spirit, events and energy surrounding the football game made it all the more exciting.

“I think that to be able to experience that week leading up to the game made the game really mean something to us,” he said. “It was really mayhem on the periphery, but during the games, it really meant a lot to Lehigh football.”

Haynes shared in this sentiment. “From the alumni to the students to the faculty, everyone is just so into that game,” he explained. “To have that as part of my athletic career is just incredible.”

This spirit, perhaps, is what draws back so many Lehigh alumni game after game.