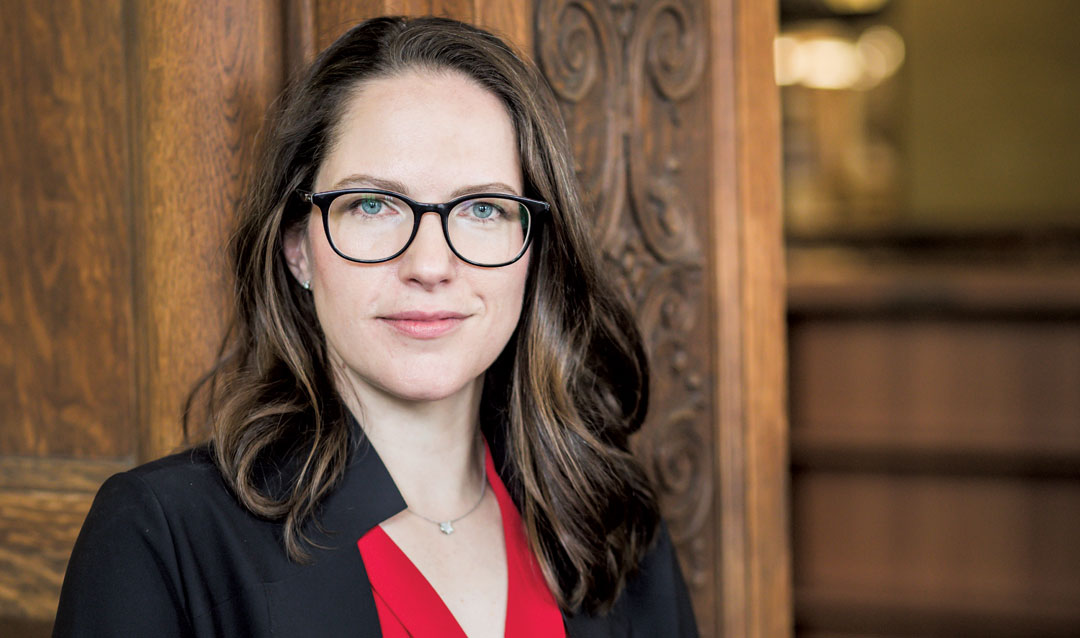 A broken tibia is painful enough, but if the bone doesn’t heal properly—if what doctors call “nonunion” occurs—the continued pain can be excruciating for a patient. A significant challenge for clinicians, says Hannah Dailey, is knowing that the bone is failing to heal early enough to take the necessary measures to repair the break and avoid an extended period of pain.

In the typical healing process, a soft tissue called callus forms along the fracture line of the injured bone and, over time, hardens into new bone. Doctors observe this through regular X-rays, which they use to determine whether a patient is healing normally, healing at a slower-than-normal rate or experiencing nonunion—a condition that requires surgery.

“For the benefit of the patient, and reduction of cost and reduction of risk, which are really important components of moving our health care system forward, what we need to do is identify the problems early and intervene, when appropriate, and know when to watch and wait,” says Dailey, an assistant professor of mechanical engineering and mechanics.

Driven by the understanding that timing is everything, Dailey has designed a virtual mechanical test that uses classical engineering tools—including the same kind of analysis used by civil engineers to simulate what happens to a bridge when a load is applied to it—to predict the healing timeline of a shinbone.

“Nobody’s ever done anything like this,” says Dailey. “For a patient who’s going to need surgery at nine months, when it's absolutely crystal clear that this bone is not going to heal on its own, what if you could know that at four months and do the surgery? ... If you could do that, then you have saved five months for that patient, and a lot of medical expenses: doctor's visits and X-rays and the chances of needing multiple later interventions. Think about the impact, because this is one out of every 10 patients [who experience nonunion].” 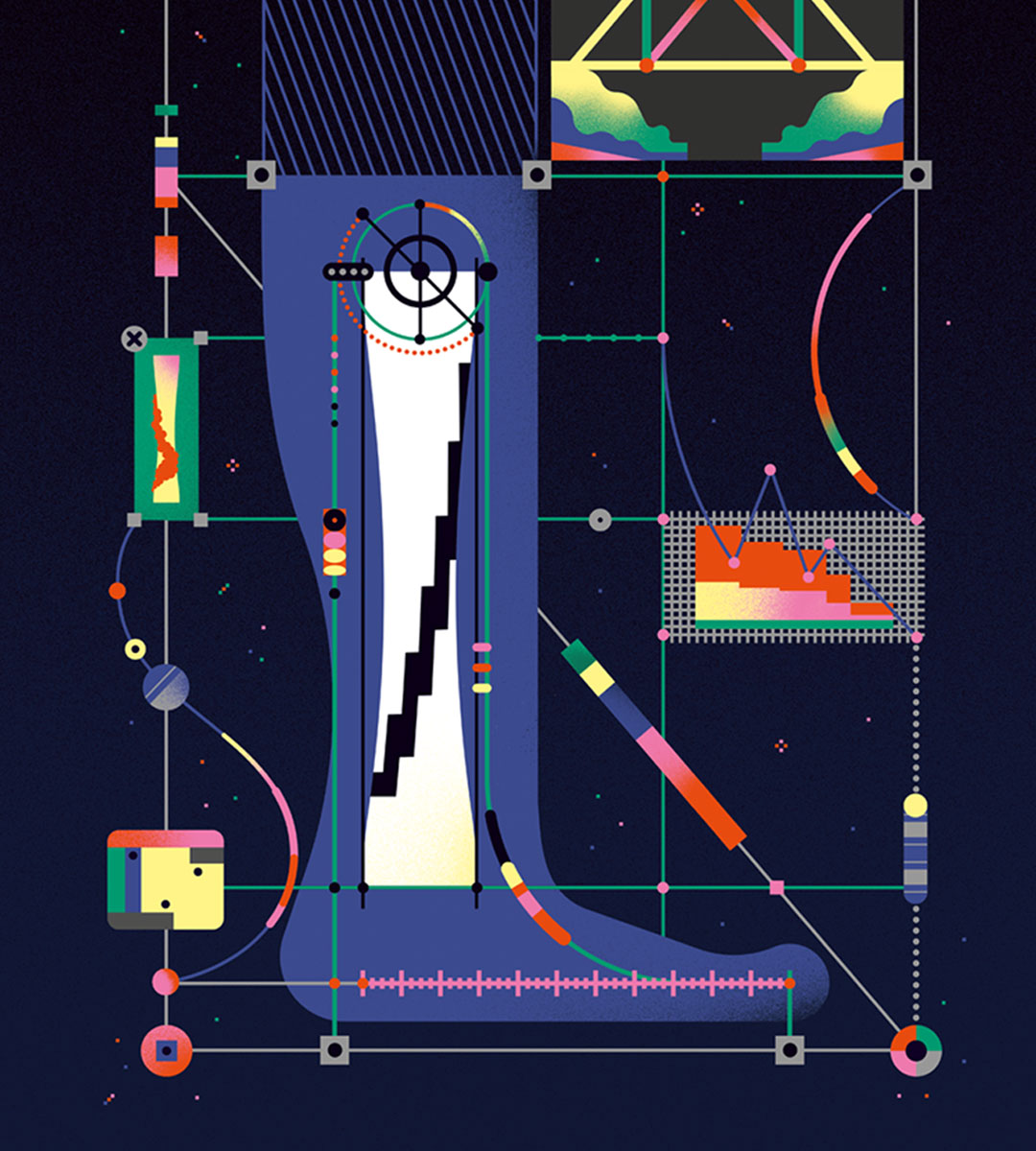 As an undergraduate mechanical engineering student at Lehigh, Dailey participated in the Integrated Product Development (IPD) program (now called the Technical Entrepreneurship program), which develops in students the entrepreneurial mindset needed to create, refine and commercialize new products and services.

“My participation in this really distinctive-in-the-nation program at that time [in 2001] provided an extraordinary learning environment that I wouldn’t have gotten anywhere else,” she says.

This experience helped prepare Dailey for an unexpected career path: She fell into the field of orthopaedics, she says, almost by accident, having had no prior experience with bone biomechanics or bone fractures.

“[It’s an example of] being in the right place at the right time and then finding your calling,” she says. “I have always had this philosophy that you need to just sort of thrive where you land.”

And thrive she did. After receiving an M.S. in mechanical engineering and a Ph.D. in mechanical engineering, also from Lehigh, Dailey spent several years as a postdoctoral researcher at the Cork Institute of Technology in Ireland, where she developed an orthopaedic implant called a Flexible Axial Stimulation (FAST) intramedullary nail. This device, which optimizes the healing of a broken femur or tibia, led Dailey and her colleagues to found a start-up company called OrthoXel, through which they aim to develop and commercialize orthopaedic devices that improve patient outcomes, increase surgeon accuracy and efficiency and reduce costs to patients and the health care system.

“As soon as I began working on that project ... I realized that orthopaedics was what I had been missing my whole research career, because it’s a very mechanical discipline. And the surgeons have a really mechanical frame of reference because of what they do. It’s all nuts and bolts and screws,” Dailey says. “And so there’s a nice connection back to the fundamentals of engineering and mechanics.”

Dailey’s professional background has influenced the pragmatic, clinically focused perspective she brings to her research, and the relationships she’s developed with orthopaedic surgeons have become what she calls “an extraordinary privilege” to have as a researcher.

“My unique value proposition as an investigator is the fact that I knew so many clinicians, and because I had operated in the clinical world and read all that literature, I knew what the end-stage problems were,” she says.

This knowledge has enabled her to work backwards, identifying the unsolved problems clinicians face and seeking ways to address them. Dailey and doctoral student Peter Schwarzenberg decided to tackle the problem of nonunion.

Diagnosis of nonunion, says Dailey, often happens late in the process in the United States. Surgeons rely primarily on X-rays, which do not give a three-dimensional picture of bone healing, to make the judgment call of “Should we do an intervention now, or should we watch and wait?”

In addition to X-rays, clinicians rely on patient-reported outcome measures (PROMs), which include pain scores, to assess the healing process. This, Dailey says, is somewhat problematic.

“We tend to have to rely on, ‘What’s your pain level?’... But pain is a really poor measure because it’s so variable from person to person,” she says. “There’s not a really good way of taking a measurement that says, ‘This bone is 10 percent healed,’ or ‘This bone is 80 percent healed,’ or ‘Since the last scan that we took three months ago, healing has either progressed or has not.’ And that tool just doesn’t exist right now.”

Dailey and Schwarzenberg had an idea: “What if we could predict which patients are going to have problems with their bone healing by analyzing the actual structure of the bone that is formed early in the healing process?” Dailey explains. “Can we bend it or test it somehow in this virtual environment, using the CT scan to make a model? And then, using these very classical engineering tools, whether it’s a bridge or bone, can we take a measurement that is clinically meaningful?”

It turns out, they could.

In collaboration with investigators at Cork University Hospital in Cork, Ireland, Dailey and Schwarzenberg conducted a pilot study of 19 patients with tibial shaft fractures following the surgical insertion of an intramedullary nail. Patients were X-rayed at six, 12, 18 and 24 weeks postsurgery. For a more detailed view of patient healing, clinicians also administered low-dose computed tomography (CT) scans at 12 weeks postsurgery.

The team then reconstructed the scans into 3-D mechanical structural models and used the finite element method—a program used by engineers to test bridges—to subject the models to virtual mechanical testing in which they applied a twisting load to assess the bone’s flexibility. The more a bone had healed, the less flexible it would be when twisted. They also used the CT scans to digitally create healthy models of each patient’s leg, applied the same load and compared the results. Dailey and Schwarzenberg also compared this model-based technique to other more standard clinical measures, including PROMs. Their results showed that their structural modeling technique was predictive of how many weeks it would take a particular fracture to heal—something no other routinely used measures can do.

Their work was published in the Journal of Bone and Joint Surgery.

What comes next, Dailey says, is a larger-scale clinical study to see if they can predict nonunion. She envisions producing a diagnostic test to be used as a routine part of clinical practice that can provide more information, allow for earlier intervention and reduce costs.

“This should be like a blood test that you could order, but it’s a 3-D structural analysis instead,” she says. “What we’re trying to do is develop a type of test that would be cost-effective, balanced against the cost savings and the human suffering that you save for those patients who need it.”

This drive for impact carries over into Dailey’s teaching as well. Today’s undergraduate students, she says, are looking for more postgraduation than just a job with a good salary and benefits. Instead, many are “much more strongly motivated by the idea of doing some greater good with their life’s work ... They want to feel they’re working towards something that’s going to benefit humanity.”

Given this perspective, Dailey works to emphasize practical examples and peer-to-peer learning and communication in her teaching.

“My real-world experiences designing things and ordering tests and understanding the engineering process as one of exploration and learning from failure and iteration have really changed my mindset around teaching,” she says. “And students seem to like it. They like the open-ended problem solving. They really want to tackle big, important societal problems, and, I think, for the ambitions that our students have, we really owe it to them, especially in a place like Lehigh, to be preparing them for the future for what they want to achieve.”

Dailey continues to embrace the opportunity to impact lives for the better. Her medical device, now in use, is helping patients heal from orthopaedic trauma.

“It’s a pretty incredible thing to have an idea, and now it is in people,” she says. “And 100 percent of the people who have had my company’s implant have healed well, and quickly. It’s kind of a Cinderella story, and that’s pretty extraordinary.”

A Call for Women in Mechanical Engineering

Although she didn’t have a single female professor in all her years studying mechanical engineering, it didn’t occur to Hannah Dailey that being a woman in her field is rare.

“I didn’t realize I really didn’t belong until 20 years too late,” she says with a wry smile.

Lehigh’s P.C. Rossin College of Engineering and Applied Science exceeds national averages for the enrollment of women, but these numbers are not carrying over into mechanical engineering, Dailey explains. She believes this has to do with the presuppositions students have about what graduates can do with the degree.

Dailey wants to help bring about change. Through a partnership with the Perry Initiative, an organization that runs intensive outreach programs to inspire young women to be leaders in orthopaedic surgery and mechanical and biomedical engineering, she seeks to provide hands-on experiences for young women that “prove to them that they can do things that they didn't know that they can do.”

The Perry Initiative is sponsoring a capstone project for Lehigh engineering students for the 2020 cycle year. Beginning in January, Dailey and a student team will be developing a new medical implant system for the Perry Initiative’s college-level curriculum. The goal, says Dailey, is to design a stripped-down replicate of the tools used for an intramedullary nailing procedure, in which a specially designed metal rod is inserted into the marrow canal of a fractured femur or tibia to help it heal. Experience with a device like this can develop self-efficacy in young women and help them realize their potential, she explains.

“This is a real project that has the potential to have impact in the real world. The design can actually get made and be used in educational outreach all over the country. And so I’m very excited ... because obviously, orthopaedics is what I love. And the Perry Initiative’s mission is something that I intensely resonate with now, because I just didn’t realize when I was going through the process how against the odds it was. It didn’t occur to me to think in that way.”