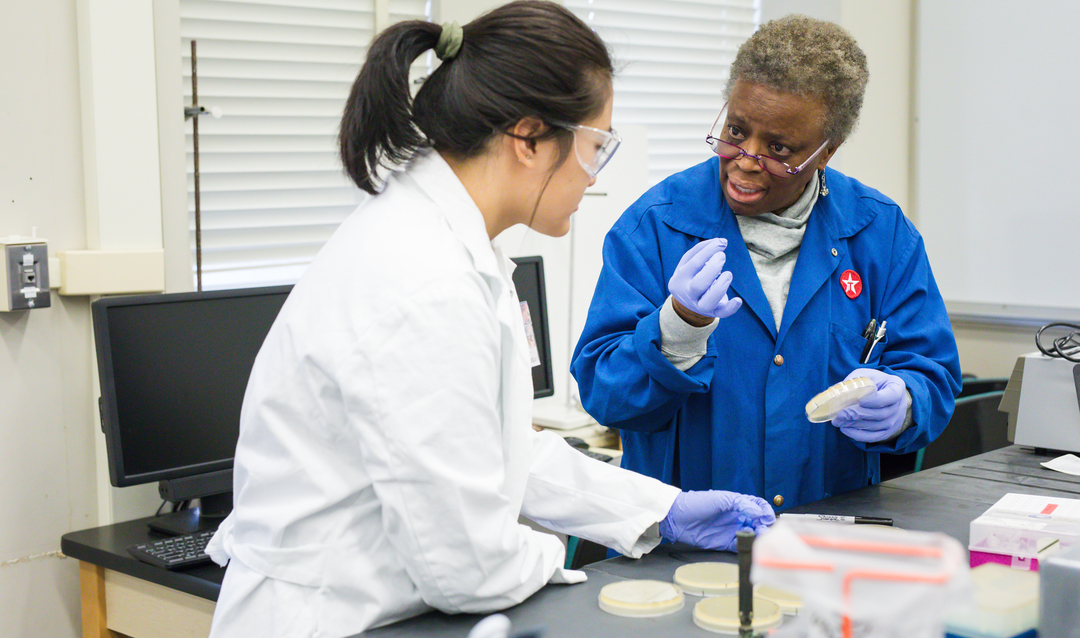 Professor Vassie Ware (right) works with students a they hunt for viruses in soil samples and progress to complex genome annotation and analyses.

Ware was recognized for her contributions to understanding ribosomes and for outstanding initiatives in undergraduate science education.

Vassie Ware, professor of molecular biology in the department of biological sciences, has been named a fellow of the American Association for the Advancement of Science (AAAS), the world's largest general scientific society and the publisher of the journal Science.

Ware was recognized for her contributions to understanding ribosomes and for outstanding initiatives in undergraduate science education. She is among 489 members to be awarded this honor by AAAS because of their scientifically or socially distinguished efforts to advance science or its applications.

"I was excited to learn that Vassie was selected as an AAAS Fellow," said Robert Flowers, the Herbert J. and Ann L. Siegel Dean of the College of Arts and Sciences, who himself was named an AAAS Fellow in 2012. "This recognition reflects what CAS faculty have known about our colleague for years, that Vassie is a stellar scholar who is truly committed to the growth and development of young scientists.  It also speaks to her leadership in the scientific community."

Ware’s focus areas of research since arriving at Lehigh have included the molecular biology of ribosome biogenesis and heterogeneity in eukaryotes, tissue-specific expression and functional diversification of ribosomal protein paralogues in Drosophila, and phage genomics. She is the inaugural director of the Howard Hughes Medical Institute (HHMI) sponsored SEA-PHAGES program at Lehigh. Students selected for the program take part in research-focused phage genomics courses in which the genomes of novel bacteriophages (viruses that infect bacteria) that are isolated from local soil samples, are characterized by sequencing, gene annotation methods, and molecular genetic analyses.  As co-director of Lehigh’s HHMI Program (that includes the Rapidly Accelerated Research Experience [RARE] and BioConnect), she is part of the university’s efforts to improve STEM retention among student groups that are traditionally underrepresented in STEM and in the STEM population at large. She is also co-director of the department’s distance education Master of Science degree program in molecular biology.

Ware’s passion for research is matched by her unwavering commitment to undergraduate and graduate education. Throughout her tenure at Lehigh, she has worked tirelessly and efficiently to help science students and students from underrepresented groups reach their full potential. She has received numerous honors for those efforts, among them the Lehigh University Teaching Award, in 1989; the Lehigh University Women’s Center’s “25 Impressive Women Who Have Changed Lehigh” Award, in 2016; the INSIGHT Into Diversity “Inspiring Women in STEM” Award, in 2016; and also the Janice A. Lumpkin Educator of the Year Award from the National Society of Black Engineers, for 2019-2020. In December 2019, the American Society for Cell Biology selected Ware as an ASCB Fellow.

Each year, the AAAS Council, the policymaking body of the society, elects members who have shown “scientifically or socially distinguished efforts to advance science or its applications.” Fellows are nominated by their peers and undergo an extensive review process.

A virtual Fellows Forum, an induction ceremony for the new Fellows, will be held Feb. 13, 2021.