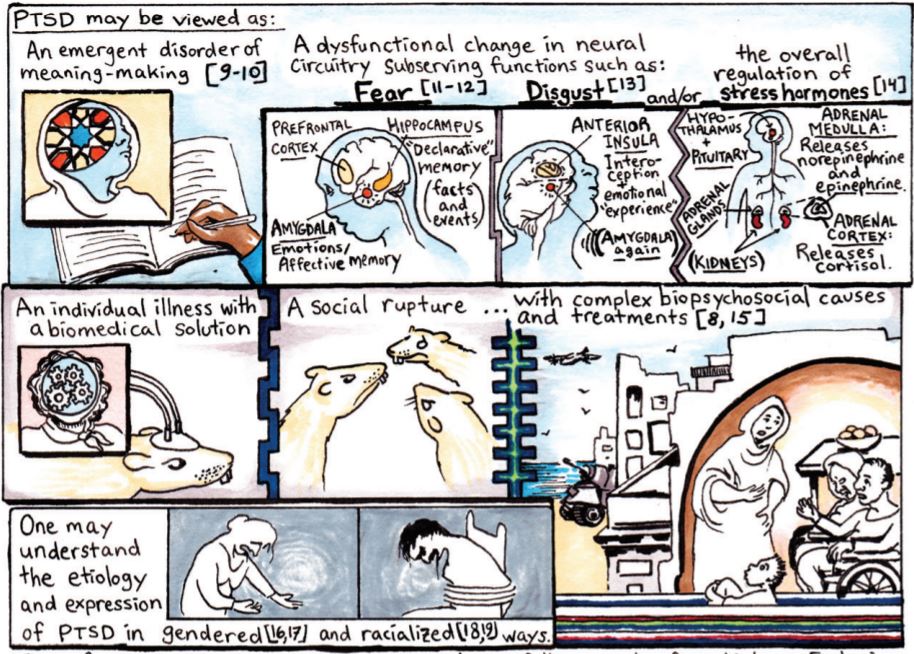 Professor Ann E. Fink is part of a growing movement known as Graphic Medicine, a term that refers to academics and clinicians working at the intersection of healthcare and comics. (Text and illustration by Ann E. Fink)

Those who study and treat disorders of the mind―such as neuroscientists, psychiatrists and therapists―are in a position of influence. Their decisions and actions have the potential to impact individuals at the deepest levels by affecting our memories and even how we see ourselves. Such professionals “...occupy positions of intellectual authority,” as Lehigh neuroscientist and artist Ann E. Fink writes. Their choices can have profound consequences.

History, both distant and recent, provides numerous examples of the use and misuse of this power. Consider the continuously evolving Code of Ethics for the American Psychological Association (APA) and the criticism the organization received for its involvement in the post-9/11 torture of prisoners held Abu Ghraib prison in Iraq, among others. That the APA spoke out last week in opposition to the U.S. administration’s announcement that migrants detained at the U.S. border can be held indefinitely highlights the importance of ethics to the mental health field.

In her latest paper―written and illustrated as a comic book―Fink, a professor of practice in biological sciences, urges both scientists and clinicians working on mental health issues to think critically about not only the biological meaning but the social meaning of trauma. In “Fanon’s Police Inspector,” published in AJOB Neuroscience, she offers a bioethical inquiry into the social obligations of studying and treating trauma through an examination of a true story told by Martinique-born psychiatrist Frantz Fanon in his 1961 book The Wretched of the Earth.

In the book, Fanon, a French-educated black man who practiced medicine in French-colonized Algeria during its war for independence, writes about a patient: a white, male, European police inspector who is employed in torture on behalf of the colonial government. The inspector who, as Fink writes, would likely meet the current standards of post-traumatic stress disorder (PTSD), seeks help because he cannot stop beating up his wife and children, “...even his twenty-month old baby.” The inspector asks the doctor “...to help him torture...with a total peace of mind.” 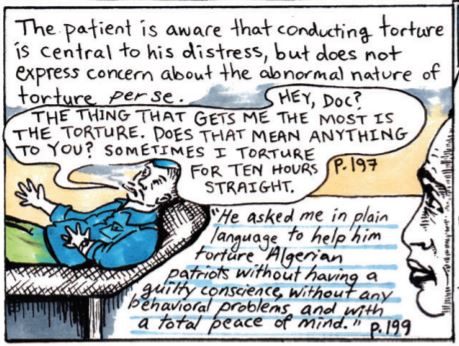 The inspector asks the doctor "..to help him torture...with a total peace of mind." (Text and illustration by Ann E. Fink)

“Fanon writes about the mechanisms and the psychological function of violence in a colonized people―what that means for their identity and their transformation and their well-being,” says Fink. “Fanon would have viewed this case through the lens of a mental health practitioner, so it would have been all about what’s happening developmentally in the colonized and the colonizer. What kind of pathology is taking place in individuals in this rotten, dehumanizing climate where basic developmental functions and needs of the self, such as interpersonal attachment needs, cannot be met, cannot develop in any healthy way?”

Fink, who studies learning and memory systems and the cellular mechanisms associated with PTSD, read Fanon’s book, an analysis of the dehumanizing effects of colonization, and thought: “What does this mean for the type of research we are doing into PTSD and how we hope to apply it in the world? What does it mean for treating PTSD in a similar context today that might involve treating a person in a violent, dehumanizing context?” She chose to present her bioethical inquiry in comic-book form because a lot of what she wanted to convey was so visual.

It is a call for people to think carefully about how they do research, how they write about it, how it's applied, how they talk about identity. 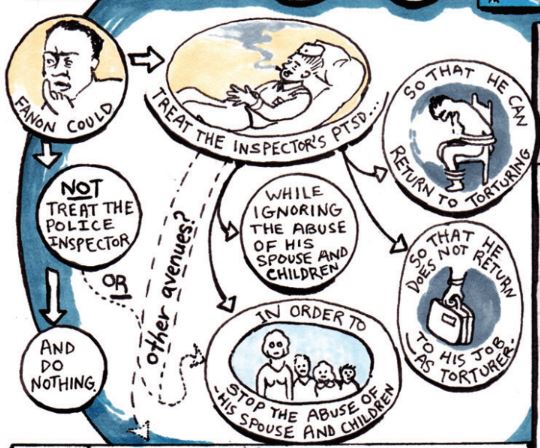 According to Fink, there is something about the comic book form that lends itself to exploring answers to questions that are difficult, both conceptually and emotionally. (Text and illustration by Ann E. Fink)

Fink is part of a growing movement known as Graphic Medicine, a term that refers to academics and clinicians working at the intersection of healthcare and comics. A common thread among them is the belief that comics are a compelling, powerful and accessible way to deliver illness narratives or to engage in other health care discourse with researchers, providers, patients and their family members―especially around difficult and complex subjects.

Fink writes that while the scenario presented in the police inspector case study would be considered unacceptable and unethical by current frameworks, it raises the following question: “Is it possible, in a colonized Algeria struggling for its national sovereignty, to treat the European police inspector in a meaningful way?”`

“This case and this question,” she writes, “serve as a starting point for a larger ethical inquiry into the social dimensions of traumatic stress. What are the responsibilities of clinicians treating such traumatized individuals? Of researchers who define the biomedical boundaries of traumatic stress? What particular rights apply to people suffering from PTSD, and for what actions can they be found culpable? Finally, what collective social responsibilities arise from understanding trauma, and how might researchers and clinicians weigh these against responsibilities to the individual?”

Fink illustrates the possible paths the psychiatrist Fanon could have chosen regarding the treatment of his patient. This “decision tree” also points to what the potential paths might reveal about the “...implicit priorities rooted in the intersections of culture, race, gender and medical authority.”

For example, one path outlines treating the inspector's PTSD so that he is able to return to his job as a torturer. Another path suggests that Fanon could treat his patient’s PTSD in order to stop the abuse of his spouse and children. Each path carries with it an inherent prioritization of some individuals’ suffering over others: the inspector, his wife and children, for example, or the Algerian victims of his torture. The Algerian victims, a man and a woman, are drawn as inhabiting different versions of various, based on their gender and race, “...of invisibility and vulnerability to terror.”

The inspector himself is drawn as having two distinct roles: ill person and perpetrator. “He is a pawn in this violent system,” says Fink. “There’s also a child victim...which makes him a bully. It’s a very complex situation. People are both the oppressors and the oppressed in almost every situation and you are doing a disservice if you don’t see and address both―as well as see both in yourself.”

In addition to adding an impactful visual element, Fink says that there is something about the comic book form that lends itself to exploring answers to questions that are difficult, both conceptually and emotionally.

“It allows you to start with the big picture, or understanding of the problem, allowing you to see a whole situation just visually,” says Fink. “In the article, you have these questions about the police inspector, how you think about this person’s mental health in the context of child abuse and these very, very heavy things that are happening in the story. And I think a visual flow of it―if you do it thoughtfully―can give you a way to take in the entire situation without having to explain it or argue about it at first.”

The visual narrative that results from the extremes inherent in the police inspector case study offers an access point to understanding broader themes of moral obligation presented to researchers and practitioners on a more regular basis.

At the conclusion of the paper, Fink writes that “...the analysis of PTSD presented here entails moral obligations for practitioners of neuroscience that extend beyond the laboratory or clinic: To address, at its root, the political, gendered and racialized violence that represents the overwhelming causal factor in disorders of traumatic stress. To refuse to support or participate in practices that exploit and brutalize individuals and entire cultures. To social change that prioritizes these commitments.”

She acknowledges both the difficulty and the importance of confronting these issues in the history of the brain sciences.

“It is a call for people to think carefully about how they do research, how they write about it, how it’s applied, how they talk about identity,” says Fink. “Up until recently, those in neuroscience didn’t have to be very socially conscious. We did not have to educate ourselves about the interactions of science and social identity. But researchers must develop that kind of critical consciousness. It is a call to clinicians as well to grapple with these issues.”