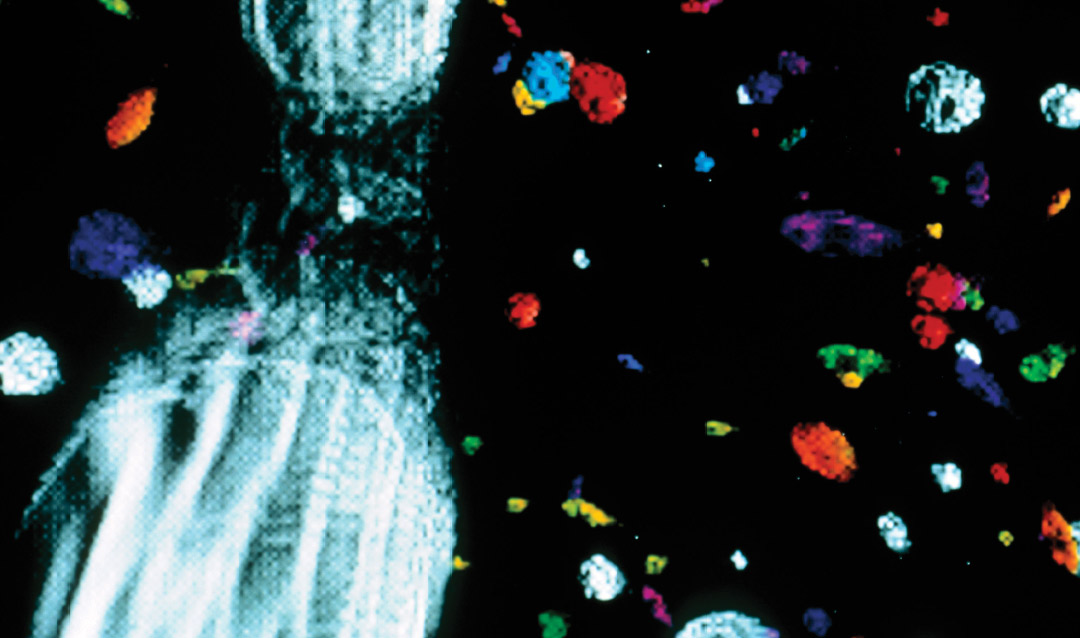 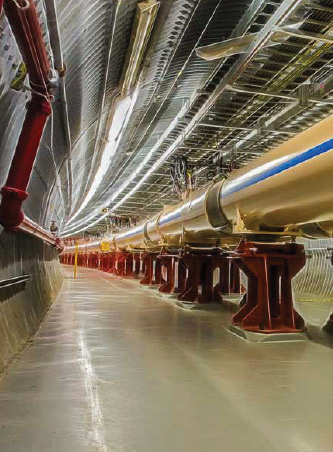 (Main) Visualization of the early universe, depicting particles in the quark-gluon "soup" which existed less than one millionth of a second after the Big Bang

(Above) Inside the RHIC tunnel

The leading theory about how the universe began is the Big Bang, which says that 14 billion years ago the universe existed as a singularity, with a vast array of fundamental particles contained within it. Extremely high heat and energy caused it to expand and then expand into the cosmos as we know it—and the expansion continues to this day.

The initial result of the Big Bang was an intensely hot and energetic liquid that was around 4 trillion degrees Fahrenheit (2 trillion degrees Celsius) and existed for mere microseconds. This liquid contained nothing less than the building blocks of all matter. As the universe cooled, the particles decayed or combined, giving rise to ... well, everything.

Quark-gluon plasma (QGP) is the name for this mysterious substance, so called because it was made up of quarks (the particles) and gluons, which physicist Rosi J. Reed describes as “what quarks use to talk to each other.”

Scientists like Reed, whose research includes experimental high-energy physics, cannot go back in time to study how the universe began. Instead, they re-create the circumstances by colliding heavy ions, such as gold, at nearly the speed of light, generating an environment that is 100,000 times hotter than the interior of the sun. The collision mimics how quark-gluon plasma became matter after the Big Bang, but in reverse: the heat melts the ions’ protons and neutrons, releasing the quarks and gluons hidden inside them.

There are currently only two operational accelerators in the world capable of colliding heavy ions, and only one in the U.S.: Brookhaven National Laboratory’s Relativistic Heavy Ion Collider (RHIC). Brookhaven is about a three-hour drive from Lehigh, on Long Island, N.Y. 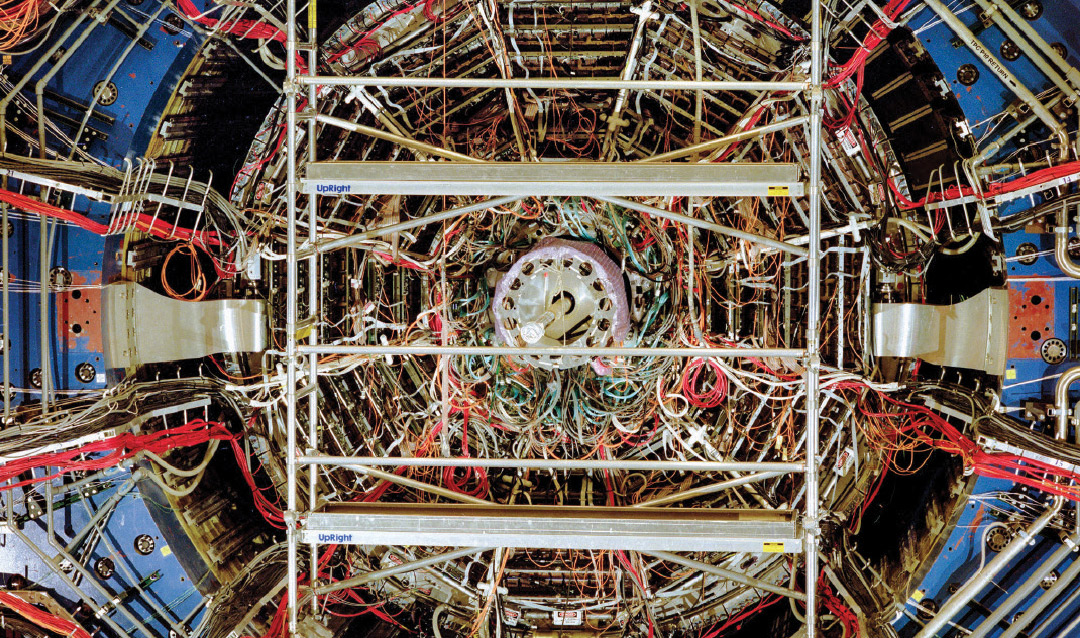 The Solenoidal Tracker at RHIC (STAR)

Reed, an assistant professor of physics, is part of the STAR Collaboration, an international group of scientists and engineers running experiments on the Solenoidal Tracker at RHIC (STAR). The massive, 1,200-ton STAR detector is actually composed of many detectors. To provide a sense of the scale: The assembly hall where the STAR detector undergoes maintenance is 8,200 square feet and five stories high.

STAR’s specialty is tracking the thousands of particles produced by each ion collision at RHIC in search of the signatures of quark-gluon plasma.

“When running experiments there are two ‘knobs’ we can change: the species—such as gold on gold or proton on proton—and the collision energy,” says Reed. “We can accelerate the ions differently to achieve different energy-to-mass ratio.”

The goal is to map quark-gluon plasma’s phase diagram, or the different points of transition as the material changes under varying pressure and temperature conditions. Mapping quark-gluon plasma’s phase diagram also maps the nuclear strong force, otherwise known as Quantum Chromodynamics (QCD). The strong force is the force that holds positively charged protons together within the nucleus of an ion (a positively-charged atom).

“There are a bunch of protons and neutrons in the center of an ion,” explains Reed. “These are positively charged and should repel, but there’s a strong force that keeps them together—strong enough to overcome their tendency to come apart.”

Understanding quark-gluon plasma’s phase diagram—and the location and existence of the phase transition between the plasma and normal matter—is of fundamental importance, says Reed, as the strong force is one of the four basic forces in nature. The other three are gravity, the electromagnetic force and the weak nuclear force (the mechanism which causes radioactive decay).

“It’s a unique opportunity to learn how one of the four fundamental forces of nature operates at temperature and energy densities similar to those that existed only microseconds after the Big Bang,” says Reed. 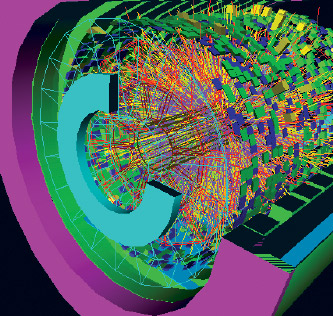 The STAR team uses a Beam Energy Scan (BES) to measure the phase transition mapping in order to better understand the strong force. During the first part of the project, known as BES-I, the team collected observable evidence with “intriguing results.” However, limited statistics, acceptance and poor event plane resolution did not allow firm conclusions for a discovery. The second phase of the project, known as BES-II, is in progress and includes an improvement that Reed is working on with STAR team members: an upgrade of the Event Plane Detector. Collaborators include scientists at Brookhaven as well as at Ohio State University.

To collide the ions, the team uses an electrostatic field to accelerate them. According to Reed, the ions go through a series of rings or filters, accelerating until they reach the center ring where they collide at very high speed.

When the ions collide, the nucleons—which are the subatomic particles in the nucleus of atoms—hit each other with tremendous force, releasing a “sea” of quarks and gluons.

“The quarks and gluons usually come out in tightly collimated jets,” says Reed. “They only exist for 10 to the minus 23 seconds.”

Detectors measure the particles as they come off the collider. Computers attached to the detectors run an analysis of what has occurred. When the team is running experiments on the Brookhaven collider, the collider runs for 24 hours, with a collision occurring about every 108 nanoseconds. The STAR Collaboration generates 10 petabytes—or 1 million terabytes of data—each year, says Reed.

Analyzing the data from the detectors is essentially big data analysis. Reed and her collaborators map the possible outcomes through calculations and equations in order to characterize the phase transition: how the protons and neutrons melt into the “perfect liquid” that is quark-gluon plasma.

Reed looks at the output of each collision to identify “hot spots,” such as a cluster of particles “bunched together” as opposed to normal distribution.

According to Reed, the upgraded Event Plane Detector that she is working on with other STAR researchers is designed to locate precisely where the collision occurs and will help characterize the collision, specifically how “head on” it is.

“It will also help improve the measurement capabilities of all the other detectors,” says Reed.

Reed says it remains a mystery—though the STAR Collaboration scientists are learning new things about QGP all the time.

For example, QGP is often referred to as “the perfect liquid” due to a number of recent discoveries about its nature.

“In addition to being very hot—hundreds of thousands of times hotter than the sun’s core—quark-gluon plasma has low viscosity for what you’d expect,” says Reed. “In other words, it flows very easily.”

In 2017, STAR scientists also discovered that quark-gluon plasma has the highest measured vorticity—that is, the fastest “swirls”—of any liquid. A communication from the Department of Energy/Brookhaven National Lab about the discovery states that the “‘Perfect liquid’ quark-gluon plasma is the most vortical fluid,” and that this “swirling soup of matter’s fundamental building blocks spins 10 billion trillion times faster than the most powerful tornado…,” setting a new record for “vorticity.”

The STAR team plans to continue to run experiments and collect data in 2019 and 2020, using the new Event Plane Detector. Reed is also part of the sPHENIX Collaboration which is building a new detector at Brookhaven that is expected to begin running in 2023.

“I get to work on this huge equipment, collaborate with other scientists and work on one of the greatest mysteries of humankind: understanding one of the four fundamental forces of nature,” says Reed.

This story originally appeared as "Big Bang Query" in the 2019 Lehigh Research Review.