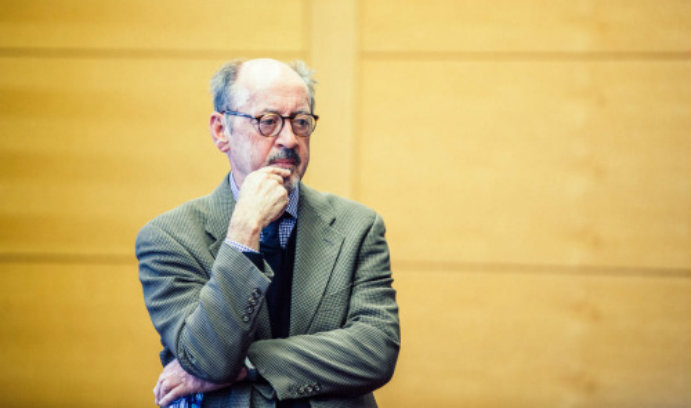 Billy Collins is known for his approachable, witty and conversational poems. So, when meeting with Lehigh students prior to his poetry reading on Thursday evening in the Zoellner Arts Center, the former U.S. Poet Laureate appropriately opened with a poem.

“What else can I do?” Collins asked with a shrug before reading and discussing “Questions about Birds” (see below), which he used as a framing device for the hour-long conversation.

Collins has published 10 collections of poetry and has been published in The New York Times, the New Yorker, The Atlantic, The American Scholar and the Paris Review, among others. His last three collections, including 2013’s Aimless Love, have broken sales records for poetry. The New York Times has called him “the most popular poet in America.”

Collins told students that he tends to think of his poems as “imaginative journeys from one place to another.”

“I like poems that take me somewhere, particularly poems that start in Kansas and go to Oz. I have very little tolerance for poems that start in Oz or start in Wonderland. I love to be carried to these exotic and strange places but I don’t want to be just dropped into them in the first line,” said Collins.

The former poet laureate of New York state, who said he knew he would write poetry “from birth,” shared his influences, poetic and otherwise—John Donne, Charles Simic, Samuel Taylor Coleridge, Ernest Hemingway, Penelope Fitzgerald and Warner Bros. cartoons—and what drives him. Poets, he said, learn from reading and imitating other poets.

“My favorite poets are the ones who taught me things. Influence is really the name of the game in writing poetry or writing anything, I think... No one is smart enough to go into a room and invent poetry. So people who write poetry are basically people who have read poetry and are moved by their reading to acts of emulation. The teachers of poetry are in the shelves of the library and in the anthologies. You learn by emulation.”

Emulation, however, according to Collins, is not driven by the appreciation of exceptional work.

“What drives you to emulate is jealousy,” said Collins. “Professors call this literary influence, but it’s actually seething envy. And if you don’t have the envy, you won’t be a writer.”

A common question among aspiring writers is about how to find one’s own voice. Imitation, said Collins, is the first step.

“The subjugation of yourself to another author is important. Writing under that author—that’s the way you rise, by going under. And the only path to originality is through imitation.”

Collins argued that, rather than the result of an introspective quest, “the location of your voice as an external source is in the library, it’s in the anthologies, it’s in the voices of other poets... You know [your] voice has combined the influences in a unique way because, quite frankly, if you come across a poet whose voice seems original or even quite fresh, I think that’s the result of taking a lot of influences and combining them in such a way that no one can detect them. So it’s like a very weird soup—you can’t trace the stuff back to the spice shelf because it’s been combined so ingeniously.”

“That voice is like a character. If you are a fiction writer or a dramatist, much of your time is spent inventing characters. If you’re a prolific writer, you leave the world with hundreds of characters you’ve invented. If you’re a poet, you just have to invent one character and you’re done for life. And that character is the sound of your voice on paper.”

Collins instructed students to assume reader indifference, which a poet can overcome by perpetuating a particular lie: “that you love poetry more than you love yourself.”

“The reader is coming to the page because of his or her love of poetry. [It has] nothing to do with you at all as a person. If you exhibit in your poem your own love of poetry, then you have a linkage. The reader loves poetry, you love poetry... You do it by one word: form. ”

Collins defined form as “anything that keeps the poem together, anything that prevents parts of the poem from drifting off like objects in space”: rhyme, meter, stanzas, metaphor, repetition.

“The more you think about form, the more you get your mind off yourself and on the poem,” said Collins. “It’s fun to express yourself, but nobody cares. They care about poetry, and form gives pleasure... You need to get the reader to love you. You do it through form, through pleasing the reader,” said Collins.

Collins closed with another poem, “Questions about Angels” (see below), a second example of his thoughtful and humorous style and a vivid illustration of his own distinctive voice.

Collins’ visit was part of the Notations Series, which is sponsored by the Lehigh University Creative Writing Center in collaboration with the Visiting Lecturers Committee. Collins’ appearance was supported by the Ann Neitzel Endowment Fund for Poetry and Creative Writing, with additional support from the Friends of the Lehigh University Libraries.

Questions about Birds
By Billy Collins
From Aimless Love

as he listens to the songs of birds
and wonders—like me—if they sleep with open eyes
and how they regard the songs of other species.

Would it be like listening to the rapid Chinese
of men bargaining over a stall?
Or do all the birds perfectly understand each other?

Or is that nervous chittering
I often hear high in the pine trees
the sound of some tireless little translator?

Questions About Angels
By Billy Collins
From Sailing Alone Around the Room: New and Selected Poems

Of all the questions you might want to ask
about angels, the only one you ever hear
is how many can dance on the head of a pin.

No curiosity about how they pass the eternal time
besides circling the Throne chanting in Latin
or delivering a crust of bread to a hermit on earth
or guiding a boy and girl across a rickety wooden bridge.

Do they fly through God's body and come out singing?
Do they swing like children from the hinges
of the spirit world saying their names backwards and forwards?
Do they sit alone in little gardens changing colors?

What about their sleeping habits, the fabric of their robes,
their diet of unfiltered divine light?
What goes on inside their luminous heads? Is there a wall
these tall presences can look over and see hell?

If an angel fell off a cloud, would he leave a hole
in a river and would the hole float along endlessly
filled with the silent letters of every angelic word?

If an angel delivered the mail, would he arrive
in a blinding rush of wings or would he just assume
the appearance of the regular mailman and
whistle up the driveway reading the postcards?

No, the medieval theologians control the court.
The only question you ever hear is about
the little dance floor on the head of a pin
where halos are meant to converge and drift invisibly.

It is designed to make us think in millions,
billions, to make us run out of numbers and collapse
into infinity, but perhaps the answer is simply one:
one female angel dancing alone in her stocking feet,
a small jazz combo working in the background.

She sways like a branch in the wind, her beautiful
eyes closed, and the tall thin bassist leans over
to glance at his watch because she has been dancing
forever, and now it is very late, even for musicians. 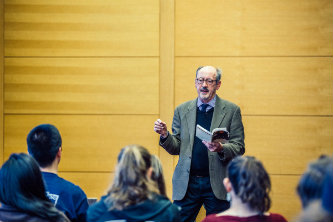 Collins told students that poets learn from reading and imitating other poets. 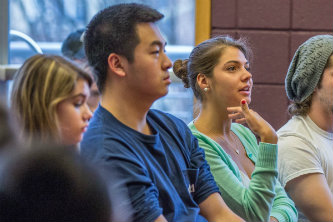 Collins answered student questions during an hour-long session before his poetry reading.