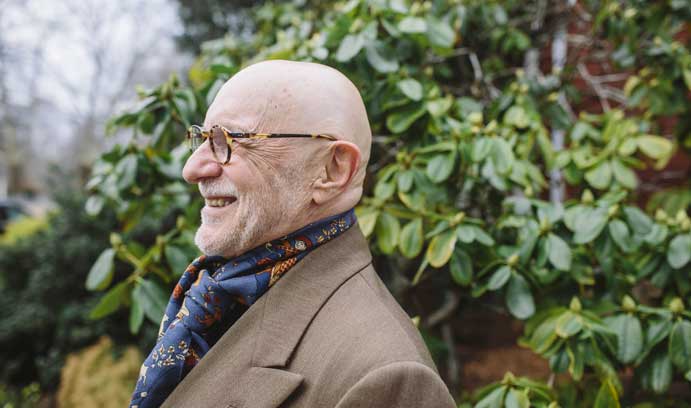 G. Bruce Boyer ’66 M.A. discovered early on that good clothes can make pretty good armor. Tired of being bullied by bigger boys, the teen launched a campaign to command their respect by wearing an adult outfit—button-down shirt, tie, Harris Tweed jacket—to special school events. The grownup getup earned him admiration and attention. Enemies not only became allies, they became followers. They modeled their sock-hop ensembles after his, making him the style leader of his own gang.

Boyer is still leading a style dance, this time as an influential authority on men’s wear. For five decades he’s been writing snappy, sensible, subtly scholarly stories about Harris Tweed and madras, tassel loafers and tie bars, designers and tailors. He’s served as a fashion expert for prominent magazines (Esquire, GQ) and a prominent columnist for fashionable blogs (Mr. Porter, Ivy-Style). In the latest of his five books, Gary Cooper: Enduring Style, he profiles the rugged movie cowboy as a sophisticated clothes horse who wore off-screen tuxedos and Mexican festival shirts with “uncontrived conviction.” It has a foreword by Ralph Lauren, who in the ’70s capitalized on the classic oxford/khaki/loafer wardrobe that Boyer began wearing in the ’50s, when Ralph Lauren was still Ralph Lifshitz.

Boyer writes with an easy élan; he’s well-read because he reads well. A good tailor, he’s observed, will measure “a variety of points on your body that you never thought had anything to do with each other.” He’ll highlight strengths and hide flaws—that “neck like a corkscrew,” that back “like a dowager’s hump.” He’s “part psychologist, part cosmetic surgeon.”

Boyer grew up in Allentown, the only child of a divorced mother with strong ideas about style. He resisted her attempts to make him wear shorts, arguing that pants made him appear more mature. At 12 he was going to men’s stores by himself; at 16 he was working in men’s stores. He picked up tips on shoe patterns and trouser cuts by reading Esquire and watching films starring Clark Gable, Cary Grant and other sartorial stars. Six decades later, he still feels the thrilling chill of Gary Cooper’s purple cowboy shirt and yellow bandana in “The Plainsman,” a Western released in 1936, when Cooper was on the trail to stardom.

“Boy, he looked fabulous,” says Boyer in his 19th-century Bethlehem house, once the residence of the manager of the Moravian Church stables. “When you saw him ride up against a blue sky, boy, it was a Technicolor dream.”

Boyer was 17 when he found another wearable dream. He begged his mom to buy him a single-breasted, three-piece herringbone suit in dark olive. She agreed as long as he agreed to wear it to his next-year high-school graduation. “Of course I agreed,” he wrote years later. “I would have agreed to be dipped in rancid yak butter.”

While studying for a master’s in English at Lehigh, Boyer met students whose flower-power outfits seemed soaked in rancid yak butter. He saw the same putrid tie-dyed shirts and bell bottoms while teaching English literature at Moravian College, his alma mater, and Allentown College, now DeSales University. No wonder, then, that he considers men’s fashions in the early ’70s a forgettable no man’s land.

Searching the globe for trends and twists

In 1973 Boyer combined his love of good clothes and good words. That year he wrote an article about the newly dead Duke of Windsor, who remained a style monarch long after abdicating the British throne. The Duke, observed Boyer, was a much neater dresser than human being; behind those dapper, second-skin suits was a messy constitution. “He was probably the most photographed man during the first half of the 20th century, yet he was kind of dull and dumb,” says Boyer. “The elevator didn’t go all the way to the penthouse.”

Boyer submitted his profile to Town & Country, a social manual for the upper-crust crowd. Frank Zachary, T&C’s fabled editor-in-chief, thought Boyer’s story zoomed all the way to the penthouse. Impressed by its zesty blend of history and humor, he hired Boyer to write an article on articles of clothing every other issue.

Over the next 15 years Boyer served as a T&C fashion editor. He traveled the globe in search of traditions, trends and twists. He interviewed venerable top tailors in England and new shoe-making stars in Italy. He spent 18 days in the Outer Hebrides chronicling how the lure of better pay from oil companies threatened the making of Harris Tweed, one of the last clothing materials made by hand. Prolific and popular, he once had five stories in a single T&C issue. He disguised his outburst with a pen name, Alan Towne, which honored his hometown.

Some of Boyer’s T&C pieces reappeared in his 1985 book Elegance, a personally professorial guide to English umbrellas, Texas boots and the debate over off-the-shelf shirts vs. customized shirts. A decade later it became a style bible for Christian Chensvold, a young clothes connoisseur. Two decades later, Chensvold enlivened his Web site, www.Ivy-Style.com, by reprinting chapters from Elegance. He also invited Boyer to write pieces about his passions for olive tones, polo coats and the autumnal tie design known as ancient madder.

Boyer writes “for an educated general reader; he allows himself to be a personality, but puts the reader first,” says Chensvold. “He knows a lot about the history of clothes, and the history of how clothes are made. He’s always looking at how things develop over time and context. He’s much more interested in stitches and buttons than I am; I don’t geek out over that stuff. Yet he keeps you interested even when it’s historical minutiae. We’ve become colleagues and friends; I’ve kind of modeled myself after him.”

Boyer’s Elegance also became a bible for Patricia Mears, deputy director of the museum at the Fashion Institute of Technology in Manhattan, as she organized the 2012-13 show “Ivy Style: Radical Conformists.” This year Boyer and Mears curated “Elegance in an Age of Crisis,” an FIT exhibit showcasing dynamic women’s and men’s clothes in the turbulent ’30s. They received big publicity for displaying the first modern, flexible fashions, made for salon and street, and for creating the first show of high-end clothes for both sexes from all over the world: New York, Paris, London, Naples and even Shanghai. Boyer added a touch of Hollywood pizazz by including eight pairs of shoes worn by Fred Astaire, star of his 2004 book and Oxford lecture on the singing dancer, classless aristocrat and style icon.

“Bruce is a born curator,” says Mears. “He has a strong point of view, an easy ego, a joy for communicating and teaching. He meets deadlines and he inspires enthusiasm across disciplines and generations. People line up to take his tours. And our junior curators love him; we call them ‘Boyerettes.’”

According to Mears, Boyer is that rare writer to cross the great divide into curating at an age when most curators are retired or ready to retire. Very few curators, she adds, have his searching, sweeping understanding of objects: how they were made; how they were used; how they should hang, on humans and mannequins.

Boyer believes that clothing can be both uniform and costume, exclusive and inclusive. “I’m not saying that a distinctive sense of style is all-important,” he says. “It would be much better if we could look into each other’s souls. What I’m saying is the way you present yourself is telling, and that’s how people are going to judge you, so you might as well be realpolitik about it. Having good taste in clothes is just like having good manners, or being able to speak clearly and effectively. It’s just one of the tools you ought to have in your toolbox.”

Boyer’s toolbox hasn’t changed much over half a century. He still favors clean, crisp, classic combinations of corduroy pants and navy crewneck sweaters, cordovan shoes from Brooks Brothers and buttonless button-down shirts from Mercer, which he likes for their unlined collars. In a 2006 interview with The Sartorialist, a leading online fashion publication, he said a Harris Tweed herringbone jacket he bought in 1994 should be perfect by 2018.

Six decades after he used a Harris Tweed jacket to turn bullies into pals, Boyer still thinks that clothes can be very good armor—and a great social lubricant. One of his best lubricants was the dark-olive herringbone suit that he coaxed his mother to buy him when he was 17. He’s convinced that the grownup getup helped convince a pretty blonde in his chemistry class to accompany him to the junior autumn dance. He’s also convinced the duds led to after-dance romance.

“Of course, the real reason you put on good clothes,” says Boyer with a sly smile, “is the hope that you’ll be asked to take them off.”