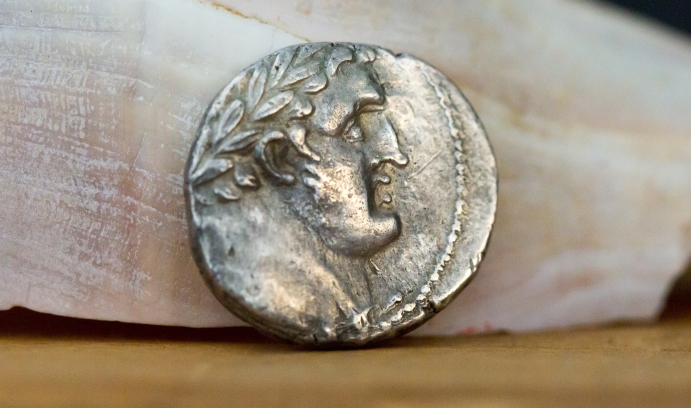 This silver coin was minted in the ancient Roman city of Tyre (located in modern-day Lebanon) in 5 or 6 C.E. It has a bulk silver content of 97 to 99 percent.

Using the most advanced techniques for analyzing the surfaces of materials, a team of researchers has shed light on the coin-making practices of the Roman Empire and the manner in which Roman coins have corroded over the past 2,000 years.

The study by Lehigh chemical engineers and materials scientists demonstrated that low-energy ions, x-rays and laser lights can be used to analyze archaeological objects without damaging them. And it yielded clues about the environment to which the coins, and the people who handled them, were exposed.

The researchers used three surface spectroscopic techniques to determine the composition of the highly reactive outer layers of the coins, where corrosion occurs. One of these, high sensitivity-low energy ion scattering (HS-LEIS) spectroscopy, had not previously been used to study archaeological specimens.

HS-LEIS, said Wachs, is the only characterization technique that can determine the elemental composition of the outermost layer of atoms on the surface of a material. This layer measures roughly 0.3 nanometer (1 nm is a billionth of a meter) in width. HS-LEIS had previously been considered a destructive investigative method but the researchers found it could be rendered “virtually nondestructive” with the utilization of modern high sensitivity analyzers that collect data approximately 3,000 times faster.

Lehigh’s HS-LEIS instrument is one of two of its kind in the United States and only 10 in the world.

The researchers found potassium, sodium, chlorine and sulfur to be “key corrosion components” for all five coins, with sulfur concentrated near the surface and chlorine occurring at greater depths.

The absence or presence of elements, said Wachs, reflects the “corrosion environments” from the coins’ contact with humans, shells, sand, pottery, wood and other sources. This elemental information, he added, cannot be used to infer significance because of the coins’ unknown handling history.

The researchers also found that some of the coins contained lead, resulting from the coin production process, at the surface layer. Wachs said this means that the people who handled the coins in ancient times were directly exposed to lead, a potent neurotoxin.

“The ability to identify the elements on metal surfaces,” Wachs said, “yields clues about the environment to which the metal was exposed, and to which people living at that time were exposed.

“Metal surfaces are very reactive with gases and vapors that are present in only trace amounts in the air,” said Wachs. “If you want to find out what’s in the air, just take a clean metal and expose it to the air. Whatever is in the air—oxygen, nitrogen, chlorine, sulfur, hydrocarbons—will concentrate on the surface of the metal.”

The sodium found on the surfaces of the coins, Wachs added, likely came from the sweat of the people who handled them.

The new surface investigation built on several earlier Lehigh studies of the bulk composition of ancient artifacts, starting with a study of Roman coins published in 1992 in the journal Materials Characterization by Alan W. Pense, former Lehigh provost and professor of materials science and engineering.

In an article titled “The Decline and Fall of the Roman Denarius,” Pense showed it was possible to use optical microscopy and metallography to examine the microstructures of coins and determine the overall amounts of the various metals they contain. Two of the coins Pense examined were also analyzed in the new study.

“Pense showed that if you knew the microstructures of the various alloys, and if you used bulk phase diagrams, you could calculate the amount of total silver in each coin,” said Notis. “He showed that our assumptions about Roman history were correct—that the decline of the Roman Empire was reflected in the decline in the value of its coinage.

Several years later, Notis teamed with Aaron Shugar, a former postdoctoral researcher at Lehigh, and two other scientists in a study of 700 shekel and half-shekel coins that were minted in the ancient Roman city of Tyre (located in modern-day Lebanon) and recovered half a century ago in Israel.

The researchers used a handheld X-ray fluorescence (XRF) unit, irradiating the coin with an X-ray and measuring the rays reflected back to determine the coins’ overall composition. They confirmed the XRF results with electron probe bulk microanalysis.

The Tyrian shekels, Notis said, circulated during the time of Jesus, when the temple in Jerusalem was the central meeting place for Jews living in the Roman Empire. “Every year, Jews were required to pay a tax to the temple,” he said. “The temple accepted only coins minted in the town of Tyre, which was known for the purity of its silver.

“We wondered what had happened to the silver content of the coinage. Two main hoards of coins from Tyre have been found. One was near Haifa in the village of Isfiya, the other was near Qumran, adjacent to the site where the Dead Sea Scrolls were discovered.” Several jars of Roman coins in mint condition, similar to the coins investigated in the Lehigh studies, were also found with the Dead Sea Scrolls.

The XRF analysis, said Notis, revealed the overall silver content of each Tyrian coin in two minutes. “We analyzed 700 coins in 24 hours using a handheld XRF unit. We plotted the bulk silver content versus the year of the date of the coin on a graph.

“We found much the same results that Pense had found—coins were made of 90-plus percent bulk silver until 44 B.C.E. when the Roman civil wars began. All of a sudden, the silver content dropped dramatically until Augustus Caesar took over.”

Notis and Shugar also used XRF to examine coins minted by the Philistines between 500 and 400 B.C.E.

A new window on environmental history

The five coins analyzed with surface spectroscopy by the current research team were minted roughly between 225 B.C.E. and 244 C.E. Their location of origin is not known and the coins, being common and in poor condition, are judged to have little value for collectors.

Silver is naturally malleable but can be strengthened if it is alloyed with small amounts of copper. The addition of copper, however, can have a significant effect on the formation of corrosion layers in silver, the researchers found in their study.

“LEIS is the only technique that can identify the composition of atoms on the outermost layer of a solid surface,” said Wachs. “It enabled us to do a very detailed corrosion analysis and determine the atomic composition layer by layer of the surface region of the coins.”

Wachs said the Lehigh group was the first in the world to apply HS-LEIS to examine archaeological objects.

The Scienta ESCA-300, one of the most powerful instruments of its kind in the world, enabled the group to determine the surface composition and oxidation states of the coin surfaces. Complementary surface-enhanced Raman spectroscopy yielded molecular details about the surface region of the coin components.

“Raman gives vibrational information at the molecular level,” said Wachs. “We were able to distinguish between silver oxide, silver metal and other types of silver, such as silver chloride and silver sulfate. All of them give different molecular vibrations, providing different fingerprints during analysis with surface-enhanced Raman spectroscopy.”

The researchers believe the advanced surface-analysis techniques they employed could help improve the preservation of ancient artifacts.

“[Our results] highlight the use of a broad range of compatible analytical methods to study microchemical surface modification across many orders of magnitude of impurity concentration,” they wrote in Applied Surface Science.

“Therefore it becomes conceptually possible to study the environmental history, for example, of coins…found in archaeological context and in uncleaned condition.

“There are also many situations where [the] quantitative study of environmental effects for both indoor and outdoor museums [is] now possible with such information.”

Keturakis, the lead author of the paper, is now a research engineer for Cummins Emission Solutions in Madison, Wisconsin. 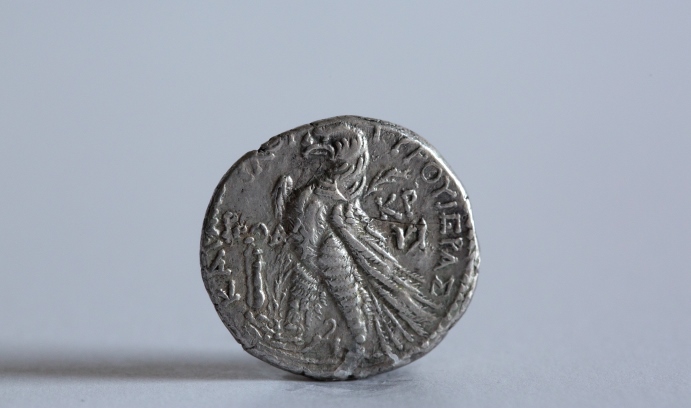 The reverse of the coin minted in Tyre. Metal surfaces, says Wachs, react with gases and vapors present in only trace amounts in the air and thus yield clues about the environment to which they have been exposed.