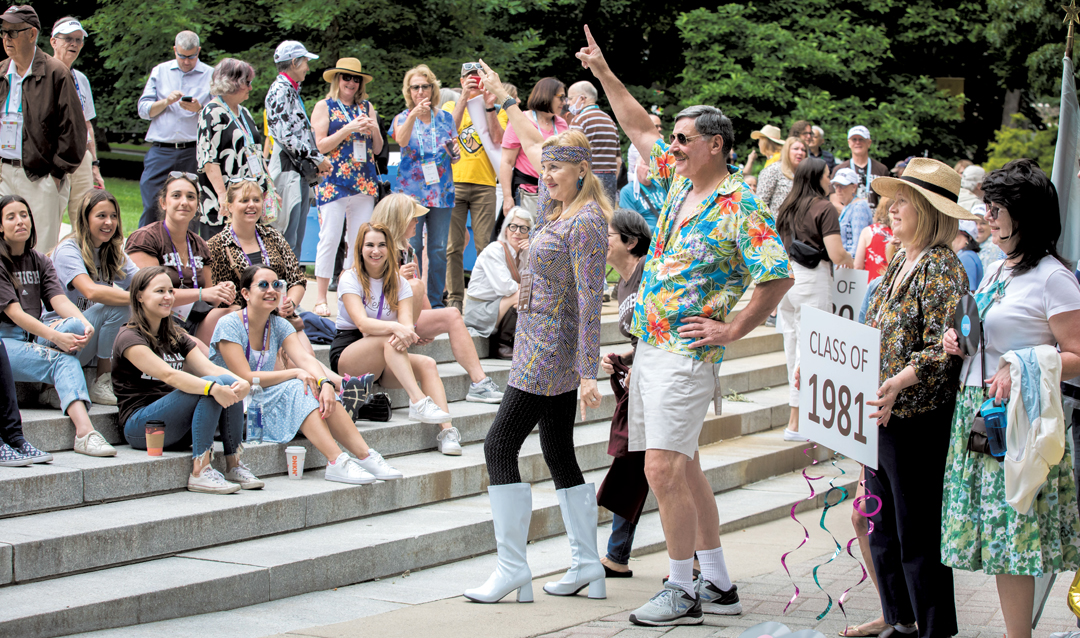 The Class of 1981 performs for a panel of judges during the alumni parade on Reunion weekend. Classes were competing for a chance to win the coveted Petty Flag.

Over four days chock-full of music, food and camaraderie, Lehigh alumni from 42 class years—beginning with the Class of 1950—were able to celebrate their reunions on campus for the first time in three years. The pandemic had led to the postponement of Reunion 2020, and again, Reunion 2021, resulting in an unprecedented number of classes returning in June. 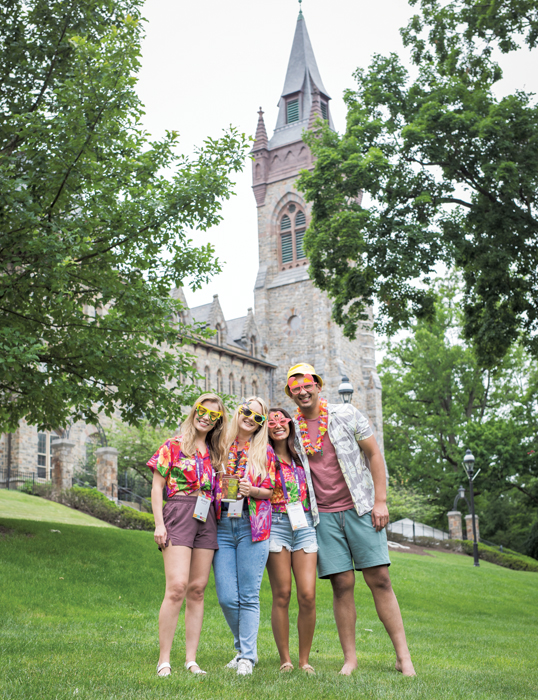 “It’s wonderful. It really brings back the memories,” said Terry Prince ’71 ’99P as he lined up with his classmates preparing to march in the historic Parade of Classes on Saturday morning.

Prince fondly recalled studying in Linderman Library among the stacks of books, the peace and quiet occasionally interrupted by the clinking radiators.

Hundreds of alumni participated in the parade across Memorial Walk on the Asa Packer Campus. Each class put on a performance for a panel of judges who determined which group took home the coveted Petty Flag.

Some classes were backed by the Marching 97, while others chose pre-recorded songs, like the Class of 1987, which gave a lively performance singing along to “Wake Me Up Before You Go-Go” by Wham! and “(I’ve Had) The Time of My Life” by Bill Medley and Jennifer Warnes.

Because of the previous years’ postponed reunions, there were three winners: the Class of 1965, Class of 1971 and Class of 1987. The parade was followed by a picnic on the University Center lawn. 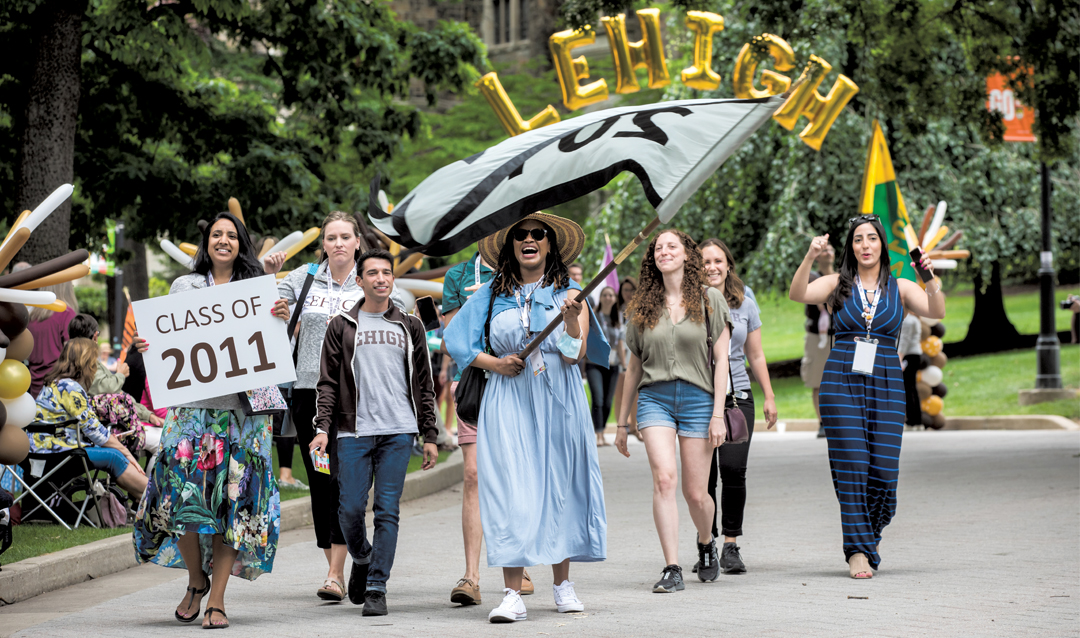 The Class of 2011 was among those marching in the alumni parade during Reunion weekend. Hundreds of alumni from 42 class years participated in the parade across Memorial Walk on the Asa Packer Campus.

Lehigh President Joseph J. Helble ’82, who also celebrated his reunion with the Class of 1982, gave a state-of-the-university address that included updates about the campus and the strategic planning process for Lehigh’s future.

Alumni also renewed wedding vows inside Packer Memorial Church (shown above) during a ceremony officiated by Rev. Timothy Shotmeyer ’00, attended the open houses at fraternities and sororities, and ran with President Helble on a four-mile loop as part of his “Pace the Prez” events. 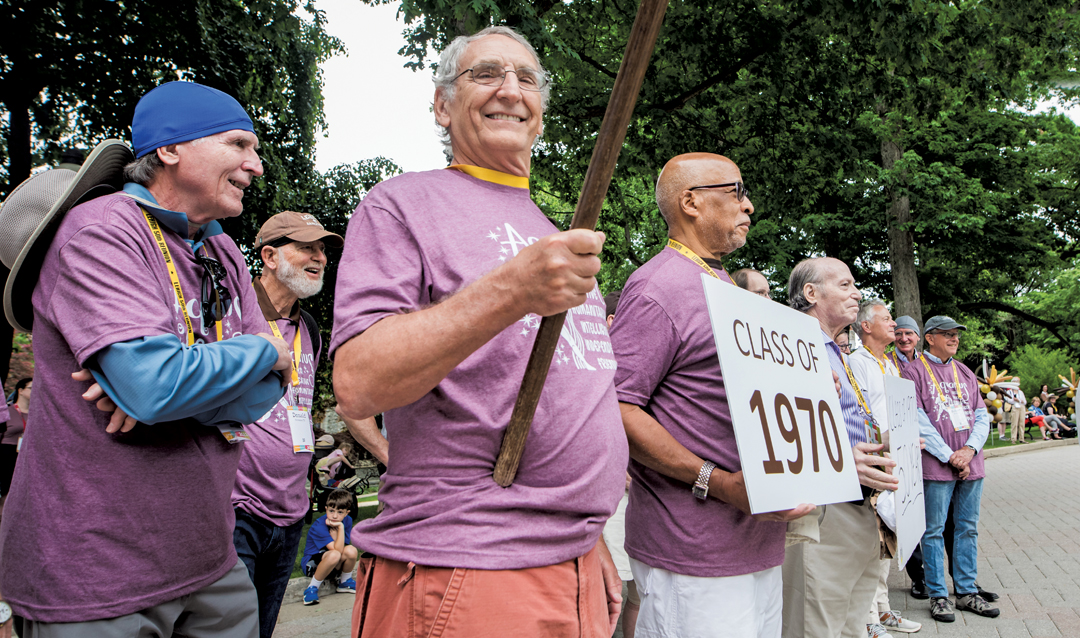 Members of the Class of 1970 take in the scene during the alumni parade. 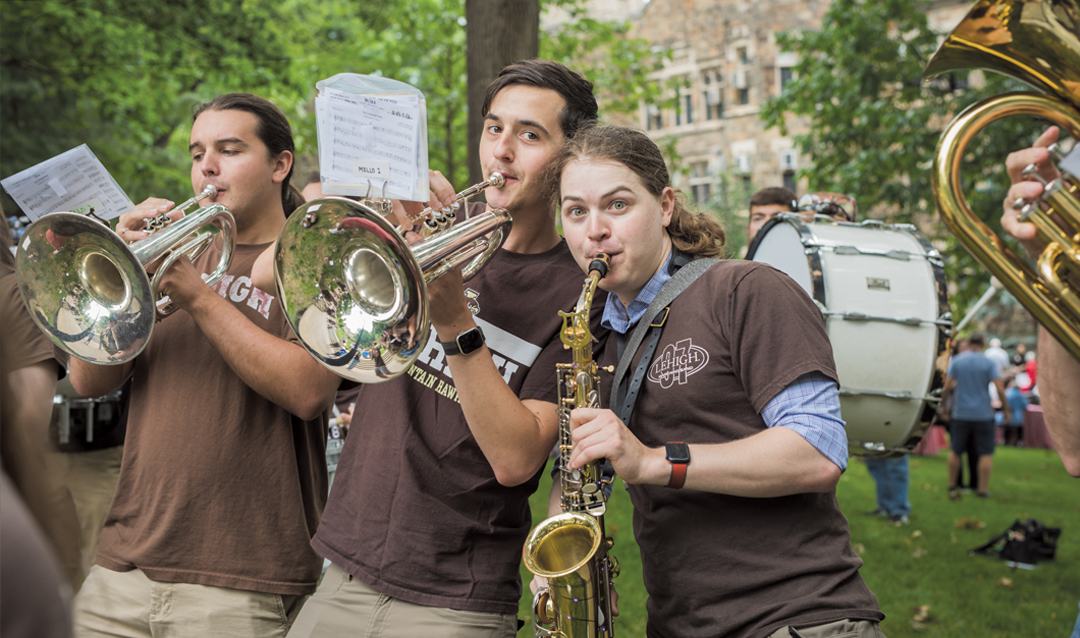 Members of the Marching 97 and Lehigh Alumni Band provided music for the event. 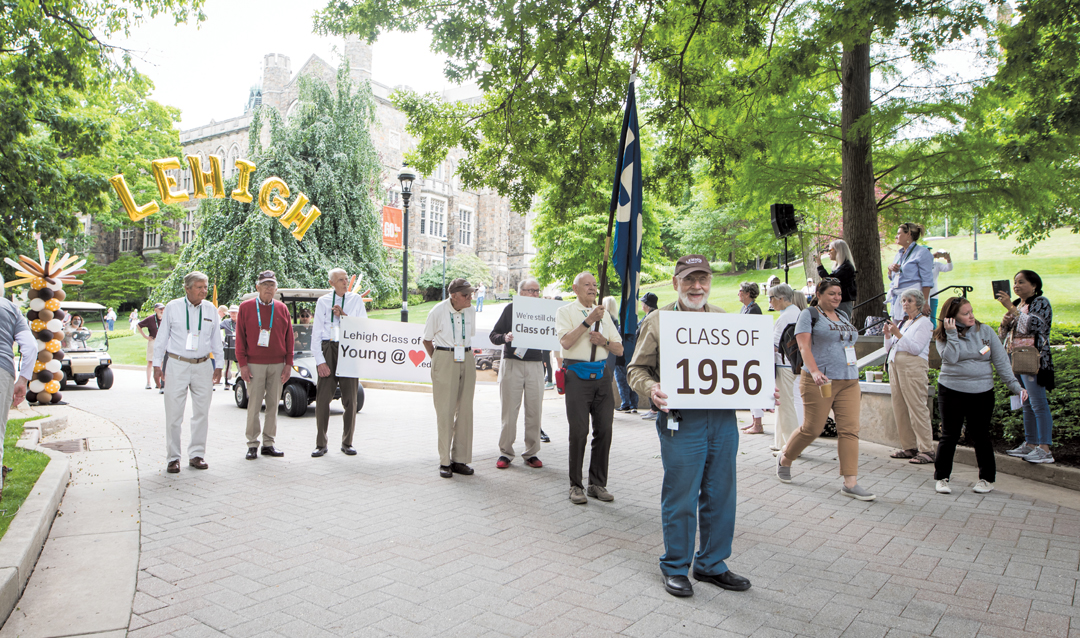 The Class of 1956 was among the hundreds of alumni and 42 class years participating in the alumni parade during Reunion weekend. 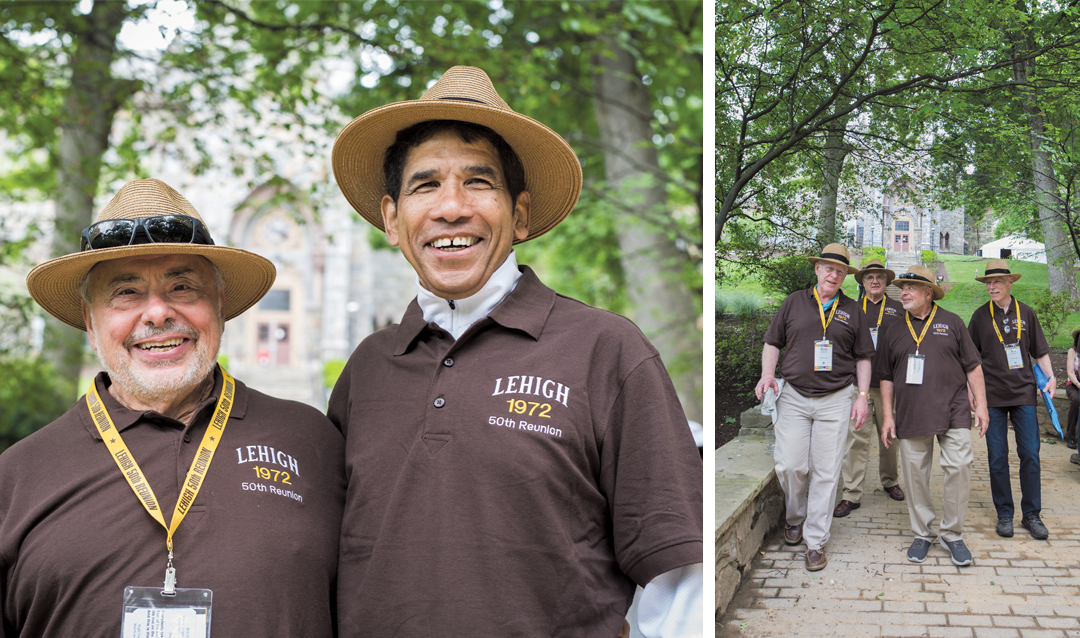 At left, Joe Garufi ’72 and Herb Campbell ’72, ’74G ran into each other at Reunion. The two were freshman roommates and hadn’t seen each other since graduation. At right, from left, members of the Class of 1972, Rich de Moll, Clarke Woodruff, Garufi and Bob Lamparter, pose during Reunion. 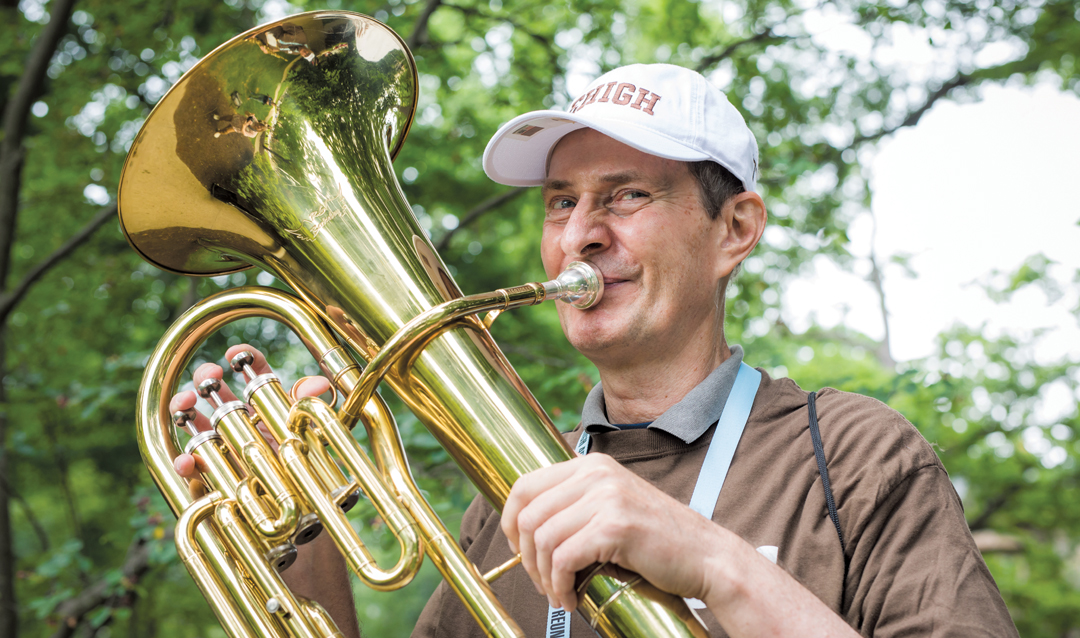 Clay Gunheim ’77 hadn’t played a musical instrument since he was in Marching 97 at Lehigh 45 years ago. A couple weeks before Reunion, he was inspired to take music lessons so he could play with the band during the weekend’s festivities. 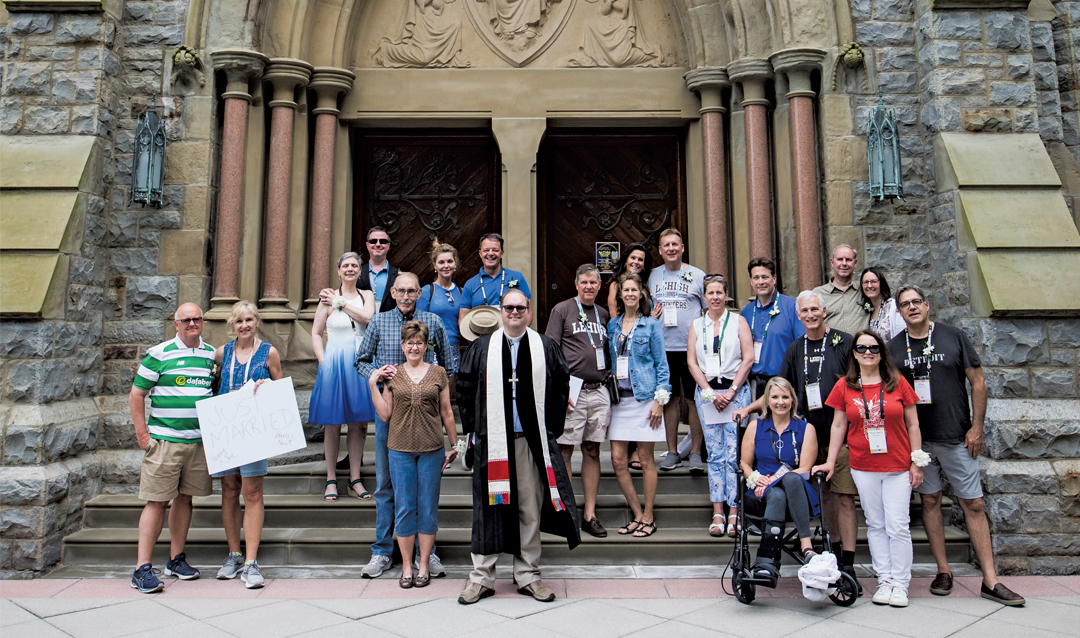 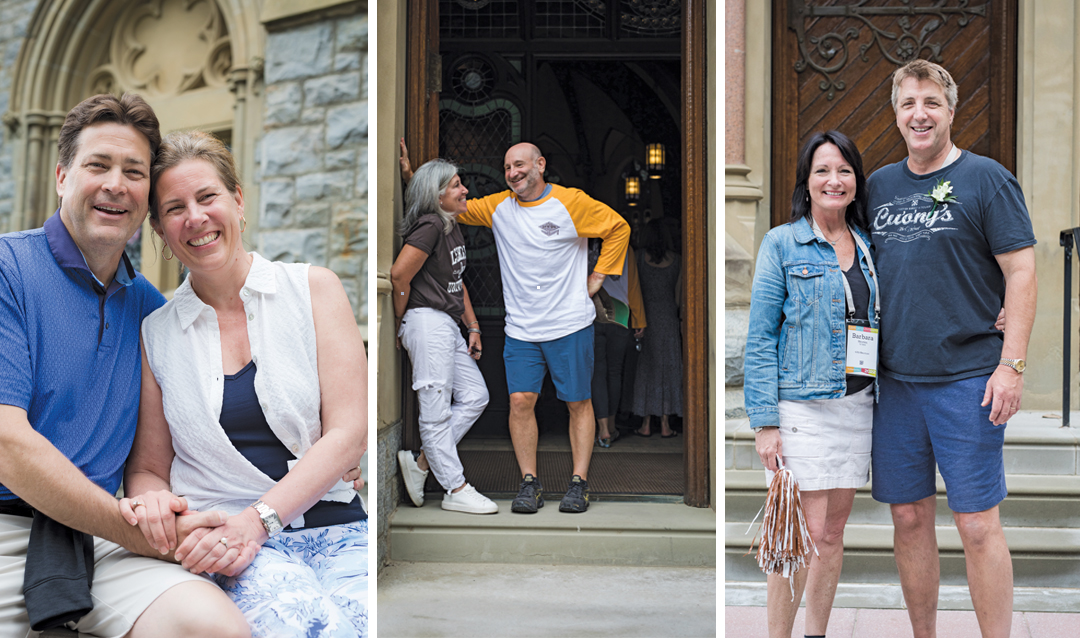 Alan Lapoint ’91 and Robin Lapoint ’91 ’96G (left) were married at Packer on June 22, 1996. “It’s a wonderful gift,” Robin said about the vow renewal. Alita Friedman ’87 and Glen Friedman ’86 (center) met as accounting majors at Lehigh. They were married in August 1989, though not at Packer Memorial. Barbara Newton ’82 ’86G and Jeff Newton ’84 ’95G (right) met in physics class while at Lehigh. They’ll celebrate their 35th wedding anniversary next year.