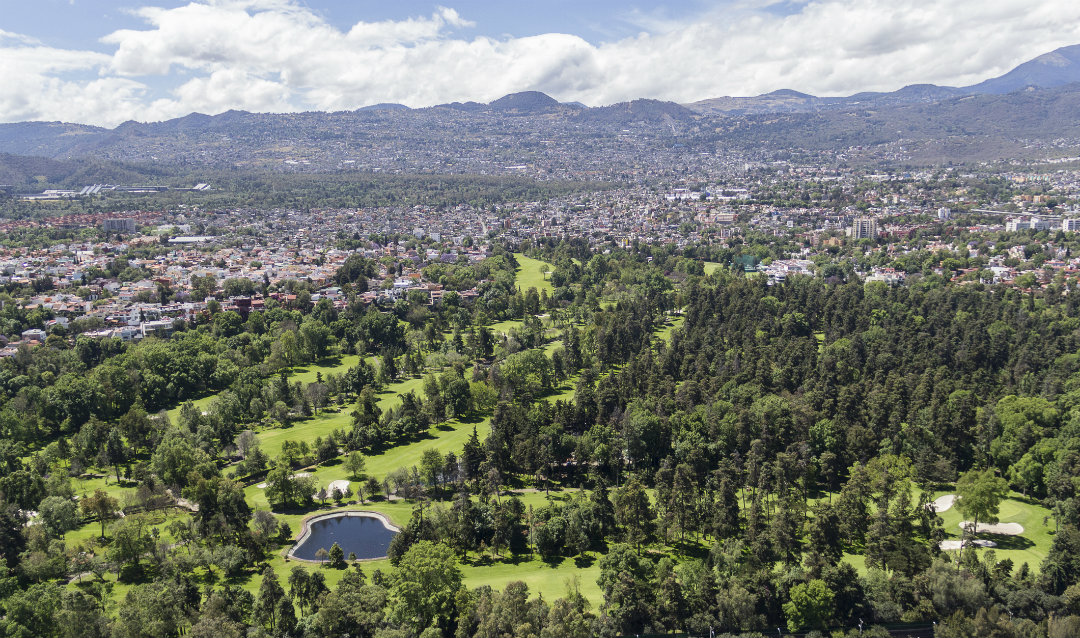 Aerial view of the green of a golf club in Tlalpan, Mexico City.

The gap between the wealthy and the poor is on a growth trajectory. Billionaire fortunes increased by 12 percent in 2018, or $2.5 billion a day, according to ‘Public Good or Private Wealth?,’ a global report released by nonprofit Oxfam International in January. Meanwhile, the 3.8 billion people who make up the poorest half of humanity saw their wealth decline by 11 percent.

In Privilege at Play: Class, Race, Gender, and Golf in Mexico, to be published May 24, 2019, Hugo Cerón-Anaya explores how this gap is perpetuated in the context of a privileged space, one in which affluent club members and impoverished workers collide: the golf courses of Mexico City. 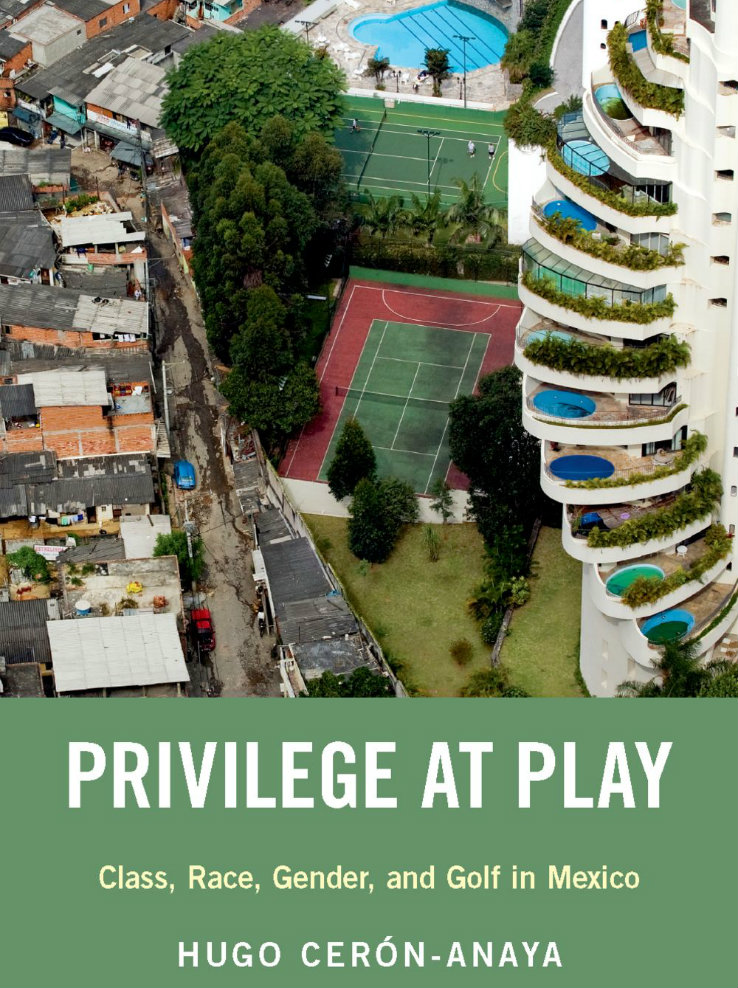 Privilege at Play: Class, Race, Gender, and Golf in Mexico will be published May 24, 2019.

Cerón-Anaya, assistant professor of sociology at Lehigh, studies how everyday practices reproduce social inequities. He first became interested in exploring inequality in Mexico through a study of golf courses while researching the country’s economic elites of the late-twentieth century. He read about how in 1982, the upper classes in Mexico rebelled against the government’s plan to nationalize the banks in response to the worst economic crisis in the country’s modern history. The government retaliated by targeting the country’s most prominent golf club, sending customs officials and tax auditors to seize 120 privately-owned golf carts that had been imported illegally.

“I wondered why the Mexican government...chose to attack one of the most powerful regional elites via a golf club,” writes Cerón-Anaya in the book’s introduction. “Was the government trying to intimidate and humiliate these wealthy individuals? Why do so at a golf club? More generally, I began to wonder why golf is popularly associated with wealth. Why is this sport played by affluent people in Mexico?”

In a broader sense, Cerón-Anaya wanted to examine wealth inequality in Mexico, “...to discern how the city [Mexico City] could have the second largest number of private helicopters per capita in the world...and 15 Mexicans could be on the Forbes list of billionaires...while at the same time the salaries of the city’s workers were the lowest of all members of the OECD [Organisation for Economic Co-operation and Development] ...and almost half of the country’s population lived in poverty…,” he writes.

Between 2005 and 2010, Cerón-Anaya conducted 58 interviews with golfers, caddies and golf journalists, and conducted an ethnography of three golf clubs in Mexico City. Though the book looks at the lives of the powerful as well as the marginalized, the focus is on illuminating the lives and social dynamics of the wealthy.

“It is necessary, even urgent, to show that privilege and the lack of privilege—together with the interwoven influences of class, race, and gender—are two sides of the same coin,” writes Cerón-Anaya. “We cannot understand impoverished groups without paying attention to the other face of the same coin, the privileged.”

The book is not intended as an attack on the sport of golf or golfers, Cerón-Anaya strives to make clear, but as a case study and “...an illustration of how structures of privilege become embedded in the most banal and mundane practices, hiding their true nature behind masks of intelligence, hard work, good choices, discipline and meritocracy.”

He details how these structures reveal themselves through the interactions he observed during his research, particularly in the clubs’ use of space and through the language used by the people he interviewed.

It is necessary, even urgent, to show that privilege and the lack of privilege—together with the interwoven influences of class, race, and gender—are two sides of the same coin. We cannot understand impoverished groups without paying attention to the other face of the same coin, the privileged.

The Invisible Vs. the Visible: Space and Social Hierarchy at Golf Clubs in Mexico City

At one of the most exclusive golf clubs Cerón-Anaya studied, it costs $130,000 to become a member. He describes the club as existing in the center of Mexico City, while being exceptionally difficult to locate.  “The fact that it is hidden in plain view conveys exclusivity,” he says.

He says its hidden nature also functions to protect it from public scrutiny. “Because sooner or later,” says Cerón-Anaya, “if the club is publicly visible, someone will ask the question: Why in a city with so many problems do we have this green space that is set aside for the use of so few people?”

In contrast to the club’s invisibility to the public, Cerón-Anaya describes the clubs he visited this way: “Visibility and openness are what characterize the environment inside golf clubs. After crossing the architectural barriers created to keep the city outside, vast open-enclosed spaces fanned out like green sanctuaries.”

Cerón-Anaya writes about how as his fieldwork progressed, he realized how the spatial arrangement of the clubs facilitated the organization of social hierarchies and, therefore, reproduced privilege.

He writes: “The separation of caddies and golfers, for example, was commonly interpreted as the product of unavoidable class-based differences. The spatial arrangements inside clubs contribute to cement these ideas, as the caddies’ house—the space reserved for caddies—was always visually hidden from club members. The invisibility of the caddies’ waiting area allowed players to reproduce derogatory narratives that attribute lack of work ethic, immoral behaviors, and limited intelligence to these workers.”

He also describes how gendered power dynamics play out in the way the clubs use space.  The subordinate position of women, he writes, is manifested in their relative participation in the sport of golf—they constitute a small percentage of golfers in Mexico. In addition, at the clubs he visited, women are banned from the bar―commonly referred to as the “19th Hole”―which functions as a site for male golfers to socialize.

Cerón-Anaya also writes about how all of the golf clubs in Mexico City have policies that organize playing time by gender. “Women,” he writes, “are almost never allowed to play during early-morning hours on weekends, which is considered prime time.”

He describes the overriding assumption that the female club members do not work, as well as an awareness of these narratives by the female golfers with whom he spoke. Mercedes, a female golfer in her mid-fifties, said on the topic:

“‘[Generally speaking] men restrict our right to play with the argument that as we don’t work [and] that we have plenty of time to fit in a match during the afternoon, which is nonsense. Nowadays, half of the female population in Mexico works so...if we work, when are we going to play?”

One way that language reinforces social hierarchies inside golf clubs, writes Cerón-Anaya, is through the disregard of culturally customary signaling of high social status, such as titles like Señor (Mr.) or Señora (Mrs.), in favor of first names among club members. In contrast, “…workers expressed the highest forms of linguistic respect (and subordination) when talking to members.” He adds: “The use of first names among golfers, combined with the fact that workers never called golfers by their first names, situates club members in one category and workers in another.”

A particular challenge of examining racial inequalities in Mexico, he says, is that Mexicans do not conceive of differences through racial terms.  This country sees itself as “a race less nation,” he writes. The assumption is that all Mexicans are mestizo, or of mixed racial heritage.

When asked about why caddies, many of whom are skilled golfers, are unlikely to excel at professional golfing, many of the golfers discussed the reasons in nonracial terms.

“Most told me stories in which the caddies were characterized as having poor education, poor ambition, a poor diet, a poor work ethic or generally lacked support,” says Cerón-Anaya. “They weren’t referencing race as it is thought of in the United States, openly associated with skin color. However, golfers offered a set of arguments that assigned caddies an inherent otherness, assuming that these workers were naturally different from club members. This happened in a setting where most affluent club members were fair-skinned people, while impoverished caddies where darker-skinned individuals. In this context, it was clear to me that golfers used racialized arguments to explain social inequalities.”

For example, Juan, a club member in his early thirties, spoke candidly about this racialized element when the official interview was over and the tape-recorder turned off:

“...Juan lowered his voice and said, ‘You asked me before why clubs or the Federation did not support caddies [becoming professionals]. I will tell you what I think about it off the record. I think that most golfers do not support caddies, even though some are really good players, because caddies look like domestic workers. Caddies remind golfers of their maids and chauffeurs.’”

“Privilege,” says Cerón-Anaya, “is so deeply internalized by the club members that they simply don’t realize how hard it is for people who live outside of their bubbles. They find ways to justify the exclusion of the marginalized.”

He writes: “Privilege at Play reveals how wealth and status become natural conditions for some individuals, allowing them to believe that poverty is exclusively the result of personal actions and attributes rather than structural conditions.”