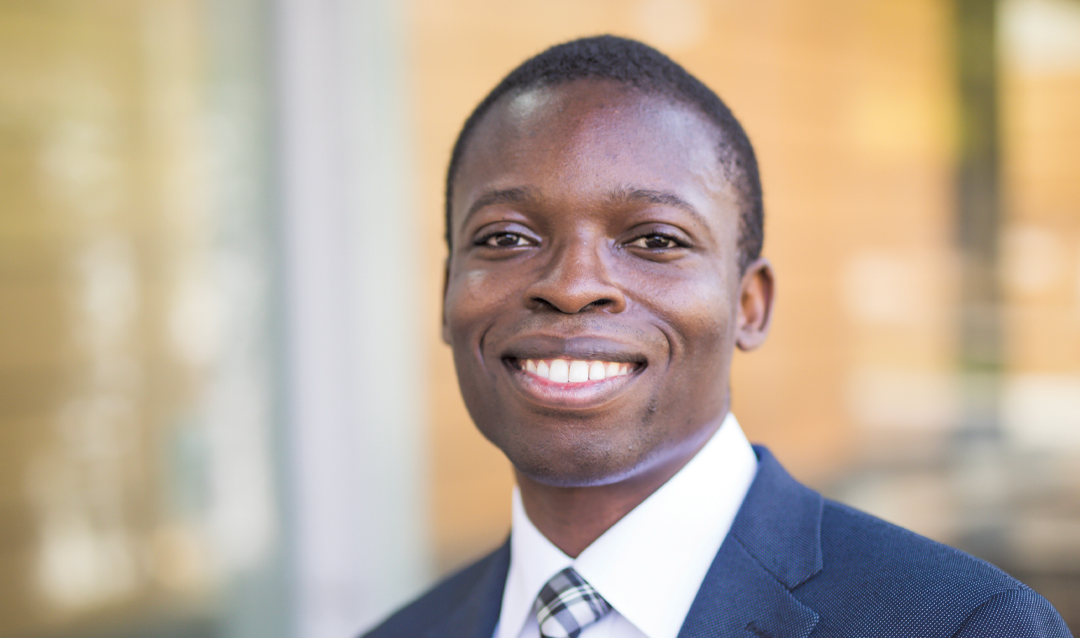 The Nigerian-born Onoriode Ogidi-Ekoko is working on advancing applied machine learning and semiconductors.

The semiconductor research could lead to more compact and faster power conversion devices.

Onoriode Ogidi-Ekoko ’15 ’16G was 5,400 miles from his native home when he successfully defended his doctoral dissertation in electrical engineering in August 2021 to earn his Ph.D. from Lehigh University.

But the Nigerian-born Ogidi-Ekoko, who goes by Onos, is right at home talking about his research into power electronics and semiconductors.

“Power electronics is pervasive in our modern world,” he says. “Electrical power is flowing all the time in electrical devices and systems all around us. That electrical power has to switch appropriately between different voltage levels and between alternating current (AC) and direct current (DC) forms as it flows through electrical systems and devices.

“Mobile chargers that convert AC power from the wall socket to DC power that goes into our mobile devices are just one example of this conversion that we are all familiar with. A similar idea goes for more complex systems found in electric vehicles and electric grids.”

The conversion process needs to occur as efficiently as possible in order to minimize associated energy losses. With ever-increasing energy consumption, even modest gains in efficiency could be very significant on a global scale. Ogidi-Ekoko’s research investigated the potential of a class of semiconductors called III-nitrides for realizing more efficient, more compact and faster power conversion devices that could help realize a new generation of power devices.

“As engineers, we always care about efficiency and performance,” he says. “Gallium nitride, a III-nitride semiconductor, theoretically has significant potential in this arena of power electronics because of some key properties it possesses. The question is, how do you make that a reality? My research work was to investigate that experimentally.”

There is also the question of employing new approaches for designing III-nitride photonic devices, notably LEDs and lasers, which Onos looked into. The underlying fundamentals and physics of these devices can be quite complex. Traditionally, many photonics design breakthroughs have been realized through sheer human effort and creativity. However, with advances in computing technology and machine learning, there is a need to leverage machine learning-based techniques to vastly improve the design process.

During his Ph.D. study, Onos was advised by Professor Nelson Tansu, formerly Daniel E. ’39 and Patricia M. Smith Endowed Chair Professor in the Department of Electrical and Computer Engineering (ECE) at Lehigh. Tansu is a Fellow of the U.S. National Academy of Inventors and IEEE, and he is currently head of the School of Electrical and Electronic Engineering (EEE) at the University of Adelaide, in Australia.

“Onos is a superbly talented researcher who is able to integrate machine learning, device fabrication and device engineering to advance the next-generation solutions in renewable, power and photonics technologies,” Tansu says. “His publication on applying machine learning for photonics device design will be key to the progress in electrical engineering and applied physics.”

A member of Ogidi-Ekoko’s doctoral committee, Sushil Kumar, associate professor in the ECE Department at Lehigh, said he would be a great addition to any research facility. “If he chooses to go into research … he would be among the top scientists, I have no doubt about that.”

The youngest of three boys, Ogidi-Ekoko was born to a math professor father and a mother who is a health educator and retired assistant director of nursing. He is from Uzere, Nigeria, but grew up in Benin City, a Nigerian city of about 1.8 million people. He was a dedicated student who also enjoyed the outdoors.

“I was fascinated by electronics, design, engineering, math and physics,” he said. “I was just curious about things of that nature.”

When it came time to apply for college, he was attracted to Lehigh by its reputation for having a standout engineering program. He received his bachelor’s and his master’s degrees in electrical engineering from Lehigh, where he was honored for his academic achievements, before going on to pursue his doctorate.

We set high goals for Onos' doctoral research, and he has been superbly focused and capable in coming up with great ideas, creative solutions and excellent values.

Ogidi-Ekoko said his undergrad experience both challenged him and broadened his horizons.

“The program is very rigorous, so I got the opportunity to really learn a lot technically,” he says. “Also, I like the fact that there is a wide assortment of extracurricular opportunities. I got to play intramural soccer. I was also a member of the National Society of Black Engineers (NSBE) at Lehigh. That provided a great networking opportunity for me, among other benefits.”

Ogidi-Ekoko participated in Lehigh’s co-op program in the fall of his junior year and the summer before his senior year, doing an internship at General Electric Transportation in Erie, Pennsylvania.

Tansu has mentored Ogidi-Ekoko for the past six years during his pursuits of bachelor’s, master’s and doctoral studies at Lehigh. “Onos was the top graduate in his electrical engineering graduating class, and I greatly enjoy our advisor-advisee interaction with him. We set high goals for Onos’ doctoral research, and he has been superbly focused and capable in coming up with great ideas, creative solutions and excellent values,” Tansu says.

Having defended his dissertation, Ogidi-Ekoko hopes to use his education and training to create new technologies and help inspire others. With the intensity of defending his dissertation behind him, Ogidi-Ekoko can relax a bit, watching and playing soccer, viewing movies, and trying out computer and tech hacks.

“I am a bit of a tech enthusiast,” he says. “I generally consider myself a fairly curious person; I like learning new things.”

His advice for incoming Lehigh students from the U.S. or abroad?

“I would say, definitely make the most of the experience,” he says. “Take advantage of the many resources that Lehigh offers and contribute as much as you can. There’s an opportunity to get a broad-based education, to study abroad, do co-ops and many other interesting things to enhance your overall experience and spur your academic, professional and personal growth. Ask a lot of questions, get involved with activities on campus and get as much support as you need to help you grow and achieve your goals.”