Number one across the disciplines 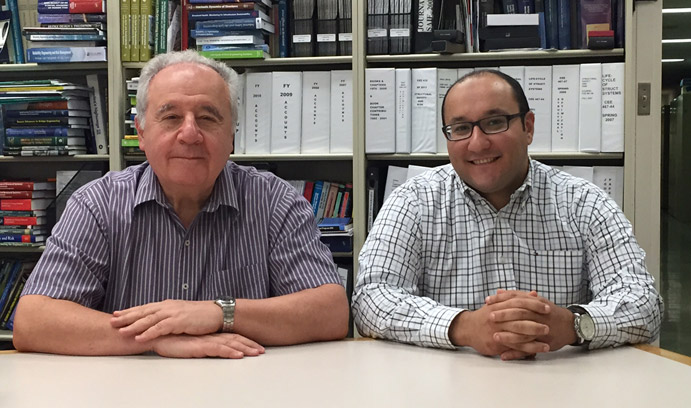 Mohamed Soliman ’15 Ph.D. (right) and his thesis adviser, Dan M. Frangopol, won the 2015 Alfred Noble Prize from a consortium of professional societies for an article they published on life-cycle engineering.

In 1992, an earthquake damaged several buildings and historic monuments in Egypt, where Mohamed Soliman spent his early life.

“I saw these engineers assessing damage, investigating failures,” Soliman says. “That was when I fell in love with the profession. I knew I wanted to be a structural engineer.”

Today, as a postdoctoral researcher at Lehigh’s ATLSS (Advanced Technology for Large Structural Systems) Engineering Research Center, Soliman is gaining recognition as one of the most knowledgeable and forward-thinking young researchers in his field.

Soliman, who completed his Ph.D. in structural engineering at Lehigh in January 2015, recently received the 2015 Alfred Noble Prize, one of the top interdisciplinary awards given to engineers. (Noble, who lived from 1844 to 1914, was president of the American Society of Civil Engineers [ASCE]. The Noble Prize is distinct from the Nobel Prize named for Alfred Nobel.)

Soliman shared the award with his Ph.D. adviser, Dan M. Frangopol, the Fazlur Rahman Khan Endowed Chair of Structural Engineering and Architecture. The two researchers won the award for a paper they wrote that was published by ASCE.

“I didn’t believe it when I first read the ASCE e-mail saying I won the prize. I just sort of stared at it before I realized, ‘Wait, that’s my name! Wait, that’s my paper!’“ Soliman says.

A systematic plan for the life-cycle

The winning paper by Soliman and Frangopol, titled “Life-Cycle Management of Fatigue-Sensitive Structures Integrating Inspection Information,” was published in ASCE’s Journal of Infrastructure Systems in June 2014.

In it, Soliman and Frangopol described a computational model they developed that allows structural engineers to update both short- and long-term inspection plans with the most current information available on the quality of a structure.

“Right now, infrastructure managers are trying to plan ahead for life-cycle inspections and maintenance actions,” says Soliman. “In doing so, there should be a systematic method to continuously update these life-cycle management schedules whenever new information related to structural safety is available, which was not possible by using the regular current practices.”

Under current practices, Soliman says, structures may not be always as safe as they can be, and repairs may also be more costly than they should be.

The model developed by Soliman and Frangopol is designed to help quantify uncertainty, which will give engineers a much better and more precise idea of how long a structure (or part of it) will withstand the effects of time and the environment. It’s meant to be applicable to a wide variety of structures, including buildings, bridges and marine infrastructure.

Frangopol is no stranger to recognition. He has received seven paper-based awards from the ASCE—most of them with former student. These include the prestigious J. James R. Croes Medal in 2001 (with Michael Enright) and again in 2014 (with Sunyong Kim ’11 Ph.D and Soliman).

But the Alfred Noble Prize is particularly notable because it’s cross-disciplinary. The prize is awarded by a committee with members representing five professional U.S. societies—ASCE; the American Institute of Mining, Metallurgical and Petroleum Engineers Inc. (AIME); the American Society of Mechanical Engineers (ASME); the Institute of Electrical and Electronics Engineers (IEEE); and the Western Society of Engineers (WSE).

This means that the paper by Frangopol and Soliman has been judged as the best among all the papers published in the technical journals of five major engineering societies.

The Noble Prize is given for a technical paper of exceptional merit that was principally authored by a researcher under the age of 35. Papers prepared by not more than two authors are eligible for consideration.

“Mohamed truly is one of the best Ph.D. students I’ve ever had,” Frangopol says. “He is very hard-working, ambitious, committed to success, always willing to learn, and his ability to work with others is unmatched.

“He has a unique, innovative perspective for looking at research problems and establishing new solutions to solve the problem at hand, and his work optimally balances the theoretical and practical aspects for the applied infrastructure management.”

Soliman, meanwhile, acknowledges the impact his adviser has had on his life and career. “I consider Dr. Frangopol a mentor, father and a friend,” he says. “He’s provided me endless support in every possible way during my time at Lehigh.”

This prize is the culmination of their relationship, which will change very soon. Soliman is preparing to join the faculty in the School of Civil and Environmental Engineering at Oklahoma State University as an assistant professor this fall.

The Noble Prize will be presented at the ASCE’s Annual Convention in New York City on October 13, 2015.