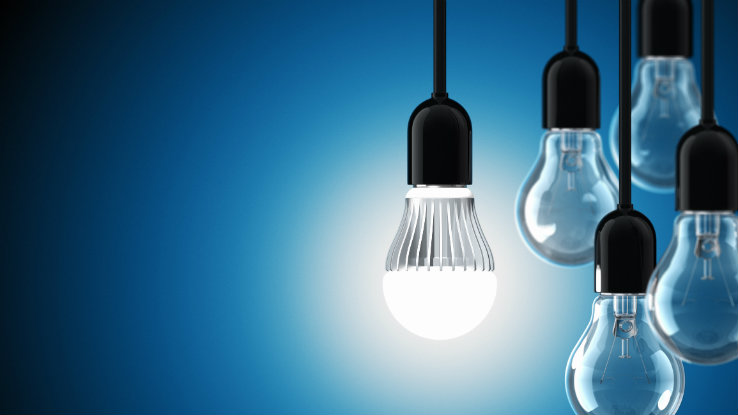 A new technique―the result of an international collaboration of scientists from Lehigh University, West Chester University, Osaka University and the University of Amsterdam―could pave the way for monolithic integration for simple color tuning of a light bulb, according to Volkmar Dierolf, Distinguished Professor and Chair of Lehigh’s Department of Physics, who worked on the project.

“This work could make it possible to tune between bright white and more comfortable warmer colors in commercial LEDs,” says Dierolf.

The team demonstrated the possibility of color tuning Gallium Nitride (GaN)-based GaN LEDs simply by changing the time sequence at which the operation current is provided to the device. Light-emitting diodes or LEDs are semiconductor devices that emit light when an electric current is passed through it.  Notably, the technique is compatible with current LEDs that are at the core of commercial solid state LED lighting.

The work is described in an article published online in ACS Photonics called “Color-Tunablility in GaN LEDs Based on Atomic Emission Manipulation under Current Injection.” The lead author, Brandon Mitchell, is a former graduate student in Dierolf’s lab and now an assistant professor in the Department of Physics and Engineering at West Chester University in Pennsylvania.

In today’s active LED displays, different colors are produced by three to four individual LEDs that are placed close to each other and create the different fundamental colors needed to produce the full color spectrum. 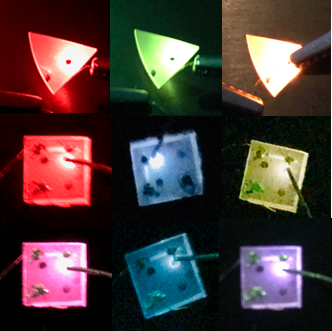 Top row: A GaN:Eu LED, which can be tuned from red-yellow due to red and green light mixing from different Eu states. Middle and bottom rows: A GaN:Eu LED with additionally added Si/Mg, which adds blue emission. Each picture is under a different current injection/filtering condition. Image courtesy of West Chester University

“We demonstrate that this can be achieved by a single LED,” says Dierolf. “We show that is possible to attain red, green and blue emissions originating from just one GaN LED-structure that uses doping with a single type of rare earth ion, Europium (Eu). Using intentional co-doping and energy-transfer engineering, we show that all three primary colors can emit due to emission originating from two different excited states of the same Eu3+ ion (~620 nm and ~545nm) mixed with near band edge emission from GaN centered at ~430nm. The intensity ratios of these transitions can be controlled by choosing the current injection conditions such as injection current density and duty cycle under pulsed current injection.”

In other words, the team achieved color-tunability in a single GaN-based LED through the manipulation of the emission properties of an atomic-type dopant.

Mitchell pointed out that “The main idea of this work—the simultaneous active exploitation of multiple excited states of the same dopant—is not limited to the GaN:Eu system, but is more general. The presented results could open up a whole new field of tunable emission of colors from a single dopant in semiconductors, which can be reached by simple injection current tuning.”

According to Dierolf, this research may benefit those who are looking for more comfortable “warmer” white light from LEDs.

“It could pave the way for monolithic integration for simple color tuning of a light bulb,” adds Dierolf. “It would also be beneficial for micro-LED displays, since it allows for higher density of pixels.”

The materials used in previous research on color tunable LEDs did not allow for easy integration with current LED technology, he adds. This work is compatible with current GaN-based LEDs that are at the core of commercial solid state LED lighting.