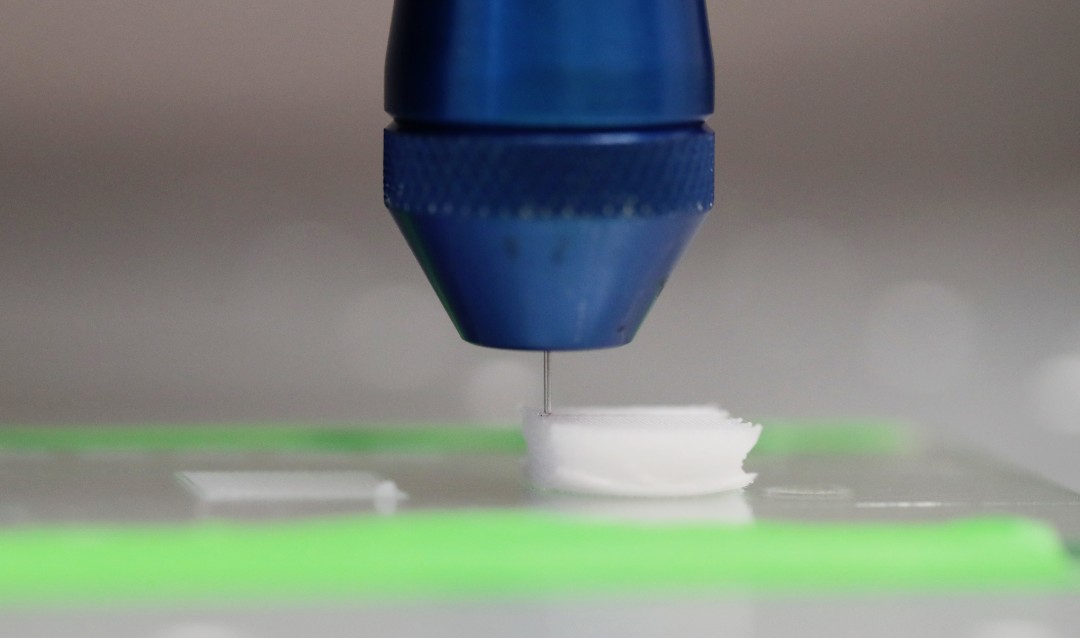 Printer head on a solvent-cast 3D printer depositing the functionalized polymer inks layer-by-layer from a needle. The solvent evaporates, leaving behind a solid 3D-printed polymer fiber.

Organs, muscles and bones are composed of multiple types of cells and tissues that are carefully organized to carry out a specific function. For example, kidneys are able to filter waste from the blood because of how their specialized cells and tissues are arranged. Disrupting this organization dramatically affects how cells and tissues do their job effectively.

Another example is articular cartilage, which exists where bones meet at the joints. This type of cartilage provides a cushioning material to protect the ends of bones and is tightly integrated with bone through a gradient region known as the osteochondral interface―osteo means related to bone, chondral related to cartilage. When articular cartilage is absent or damaged, debilitating pain results.

Unlike some tissues, cartilage cannot regenerate. It lacks blood vessels to support such repair. After injury or damage, cartilage degeneration progresses, leading to osteoarthritis, which affects approximately 27 million Americans.

“Medical intervention is the only way to regenerate osteochondral tissue,” says Lesley Chow, assistant professor of materials science and engineering and bioengineering. “To successfully regenerate this cartilage and make it functional, we must consider the fact that function is related to both the cartilage and the bone. If the cartilage doesn’t have a good anchor, it’s pointless. You could regenerate beautiful cartilage, but it won’t last if it isn’t anchored to that bone immediately beneath it.”

This presents a huge engineering challenge, says Chow, as it’s difficult to create one organ made up of two very different tissues. What is needed is a tissue engineering method that respects the multi-component and organizational nature of how tissues form in nature, she says, adding: “Then we’d have the ability to create something that’s durable.” 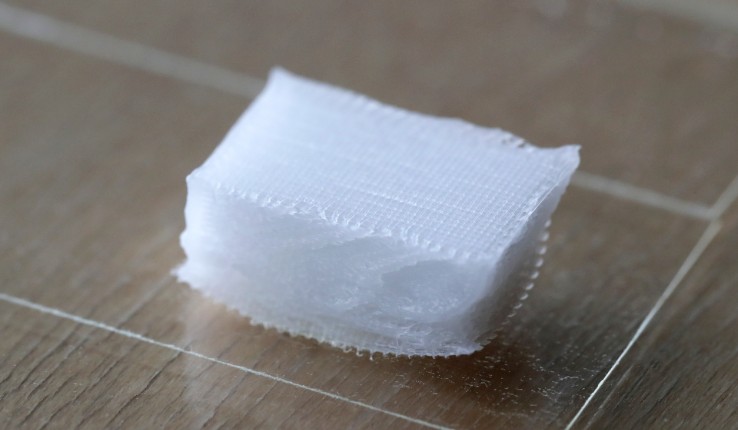 Biodegradable polymer-based scaffold fabricated into a 5-mm thick construct using a solvent-cast 3D printing platform developed in the Chow Lab. These scaffolds can be scaled up in size to achieve relevant dimensions for clinical translation.

Chow has taken a major step in the field’s efforts to address such a challenge. She and her team in The Chow Lab at Lehigh have demonstrated a new method to fabricate scaffolds presenting spatially organized cues to control cell behavior locally within one material. Their proof-of-concept paper, published in Biomaterials Science, is called: “3D printing with peptide-polymer conjugates for single-step fabrication of spatially functionalized scaffolds.”  This work was led by Lehigh graduate students Paula Camacho (bioengineering) and Hafiz Busari (materials science and engineering), with co-authors Kelly Seims (materials science and engineering), Peter Schwarzenberg (mechanical engineering and mechanics), and Hannah L. Dailey, assistant professor of mechanical engineering and mechanics at Lehigh. Their publication shows how their platform can be used to create continuous, highly organized scaffolds to regenerate two different tissues, such as those found in the osteochondral interface. 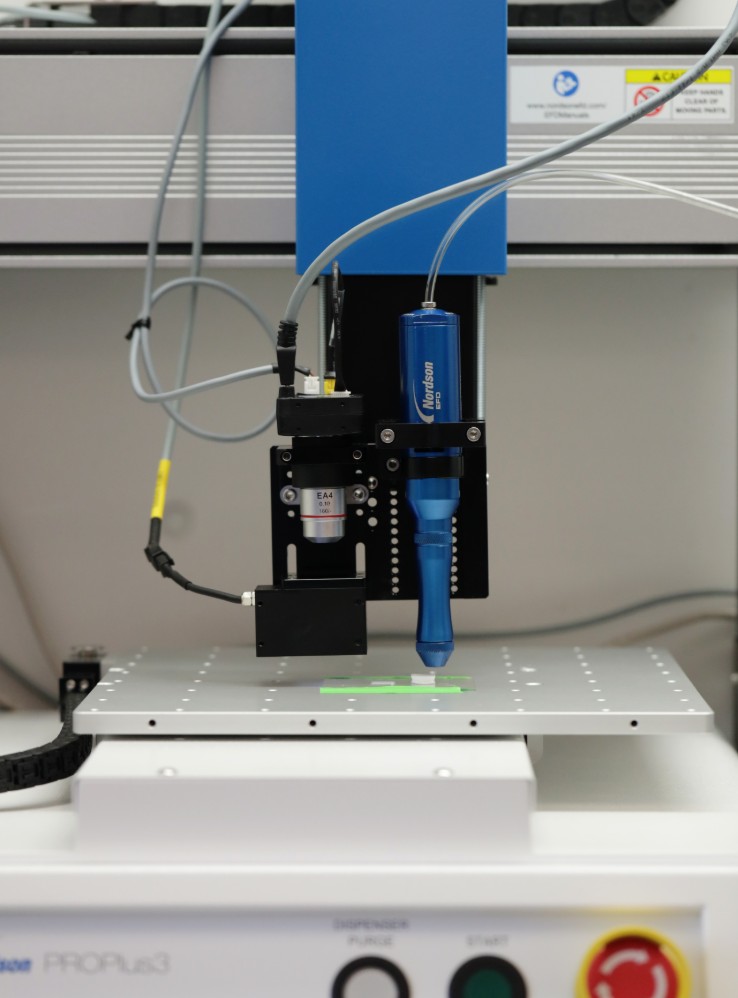 Chow’s lab creates biomaterial scaffolds made of biodegradable polymers, which are long chains of molecules that can degrade over time in the body. Scaffolds are widely used in tissue engineering to provide cells with structural support, as well chemical cues that “tell” the cells what type of cell to become or tissue to form. Used in the early stages of tissue regeneration, scaffolds are designed to be implanted in the body and then degrade as new tissue forms.

Chow’s team uses 3D printing technology to control the deposition of “inks” with different material compositions. These inks are prepared by mixing a biodegradable polymer with peptide-modified polymers. The peptides, composed of amino acids, provide the bioactive cues to the cells.

“We know from literature and nature what amino acid sequences we want,” says Chow. “We can take a segment that we know plays a specific and important role in telling cells to grow new tissue and, in a sense, steal from nature. We take a peptide and attach it onto a polymer and add that in while we are constructing our scaffolds. We use 3D printing as a way to control the organization of these peptide-functionalized polymers as well as the scaffold’s architecture.”

Once the team fabricates the scaffold, they “seed” them with cells, such as human mesenchymal stem cells that can be “coaxed” in response to the peptides into becoming different cell types.

As Chow explains, changing the scaffold’s properties is simply a matter of changing the inks loaded in the printer. The team can modify peptide concentration as well as location, and they can do this with more than one ink composition.

“What we are doing is creating an environment that fosters the regeneration of two different tissues simultaneously in one scaffold,” says Chow. “We make a scaffold that has the correct cues―one that promotes cartilage, one that promotes bone―all in one material. You then have a single scaffold where you don’t have to worry about mechanical failure at the interface because you have a single material rather than “gluing” two separate scaffolds together and just hoping for the best.”

In the paper, the authors demonstrate the effectiveness of their method using two very familiar peptides. They describe how peptide-modified polymer conjugates were synthesized with the cell adhesion motif RGDS or its negative control RGES. To demonstrate spatial control of peptide functionalization, multiple printer heads were used to print both conjugates into the same construct in alternating patterns. As designed, cells preferentially attached and spread on RGDS(biotin)-polymer conjugate fibers compared to RGES(azide)-polymer conjugate fibers. This illustrated how spatial peptide functionalization influenced local cell behavior within a single biomaterial. This preferential attachment demonstrates that the technique has real potential for creating scaffolds that enable scientists to direct “where cells are going to stick.”

According to Chow, most scaffold fabrication techniques involve modification after it is created, which can lead to unwanted outcomes, such as the distribution of chemistries in a uniform concentration. Yet, native tissues are not organized this way.

“Our platform is designed to really control how cells arrange themselves,” says Chow. “It’s like building a house and then seeing which house the cells like best. And we found that the cells really notice. They notice the two different cues. They notice whether the cues are organized or not organized.”

“It is so important for us to have fine-tuned control to make the cells do what we want them to do,” adds Camacho.

We believe this presents a versatile platform to generate multifunctional biomaterials that can mimic the biochemical organization found in native tissues to support functional regeneration.

One of Camacho’s current projects is applying the team’s scaffold biofabrication platform to engineer osteochondral tissue formation. Camacho and her colleagues culture the cell-seeded scaffolds in an incubator held at body temperature (37°C―or 98.6°F) with 5 percent carbon dioxide in order to mimic the conditions inside the human body. They evaluate what type of tissue forms and how the cells behave at different points in time. This offers them a glimpse into which scaffolds are most likely to be successful.

“Right now I’m testing two different peptides,” says Camacho. “One is to coax the human mesenchymal stem cells to differentiate into chondrocytes, or cartilage cells. And the other peptide is trying to get them to differentiate into bone. I build these scaffolds with one peptide or both peptides that are organized in different ways. And I want to see how the cells react to it―if they like one more than the other. I characterize what they are doing up to 42 days in culture.”

While the team is working on a few specific projects, including the osteochondral work, their goal is for other researchers to be able to use the platform and, ultimately, to help move the field forward.

“We believe this presents a versatile platform to generate multifunctional biomaterials that can mimic the biochemical organization found in native tissues to support functional regeneration,” says Chow.

This work was partially supported by Lehigh’s Faculty Research Grant (FRG) and Collaborative Research Opportunity (CORE) Grant, a grant with Polysciences, Inc. from the Commonwealth of Pennsylvania, Department of Community and Economic Development, through the Pennsylvania Infrastructure Technology Alliance (PITA), as well as start-up funds awarded from Lehigh University. 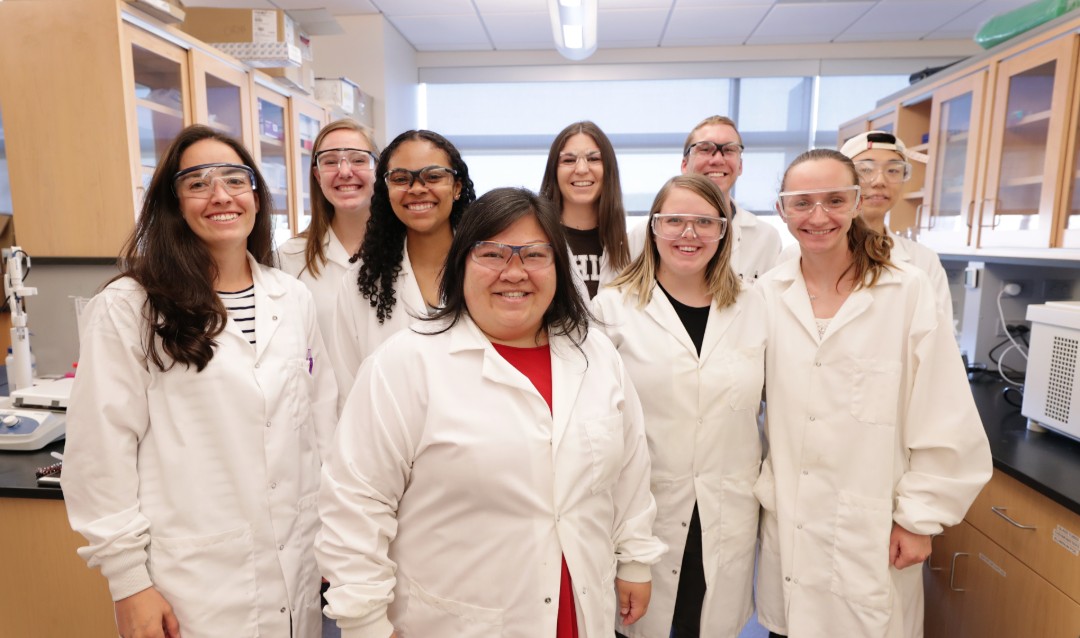