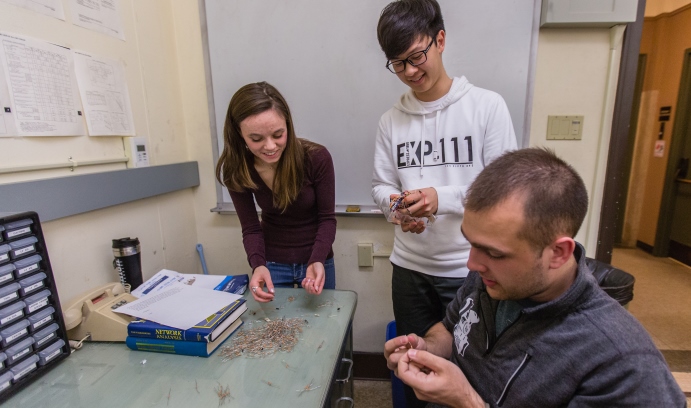 Service is one of the activities of students in the Eta Kappa Nu chapter. During a recent clean-up of an electronics lab, Genevieve Shafer ’17, Jacob Kim ’18 and Correll French ’17 sorted through piles of resistors left on lab benches. (Photo by Christa Neu)

Students who enroll in electrical engineering, say Christina Catalano and Brendan Huber, learn quickly that they have chosen one of Lehigh’s most difficult majors. If they stick with their decision, they learn later that mastering the field was well worth their effort.

“What makes electrical engineering difficult is that you can’t see it or touch it,” says Huber. “It’s not palpable. It requires a steep learning curve, but once you acquire the mindset, you get rolling.”

“Having a chapter on campus is a big benefit to students,” says Catalano, the Chi chapter president. “As students, our best ideas often come from interacting with each other. With HKN, you become part of a network; you can meet professors, alums, and people in the community. And we have a homework room once a week where students can get help with their assignments.”

To reestablish the Chi chapter, Catalano, Huber and several other students enrolled in the ECE department had to file an application with the national chapter and sign up at least eight active members.

The new chapter inducted 24 members at its reactivation ceremony in December 2014, added several more the following spring and now has 34. Each new member is interviewed by chapter officers and asked to write a letter describing how they would seek to improve the chapter.

Last month, the Chi chapter was one of 22 HKN chapters nationwide to receive a 2014-15 Outstanding Chapter Award from the IEEE-HKN Board of Governors. The award recognizes chapter administration and programs that “improve professional development, raise instructional and institutional standards, encourage scholarship and creativity [and] provide a public service.”

Huber, the Chi chapter vice president, says the chapter organizes activities to promote the study of electrical or computer engineering and to support students already enrolled in the program. This week, for example, chapter members visited the Lehigh Valley Academy to do a show-and-tell session for high school students interested in electrical and computer engineering.

To celebrate the 90th anniversary of the initial establishment of the Chi chapter at Lehigh, the chapter recently hosted a 1920s-style dinner party at the Broadway Social. In October, the group held a networking dinner with about 20 ECE alumni. Chapter members also volunteer to clean labs and do other service projects.

A wealth of opportunities

The Chi chapter also puts on a welcoming event for freshmen in the ECE department and takes part in an annual event that the P.C. Rossin College of Engineering and Applied Science hosts to help undergraduates choose majors.

“We’re all in the same boat trying to get through a tough major,” says Huber.

“A lot of people think other types of engineering are broader than ECE,” says Catalano, who will take a job later this year with PJM, a regional transmission organization that distributes electricity to 13 states. “But I think ECE is the broadest of all because it encompasses so many industries.”

Catalano completed an internship last summer with Linde Engineering North America Inc., an international supplier of industrial gases. Huber worked as a student in Lehigh’s cooperative education program with Lutron Electronics Inc., the lighting control giant. He will take a position with the company after graduation.

“Everyone pulls their weight in this group,” says Huber. “We’re pretty driven.” 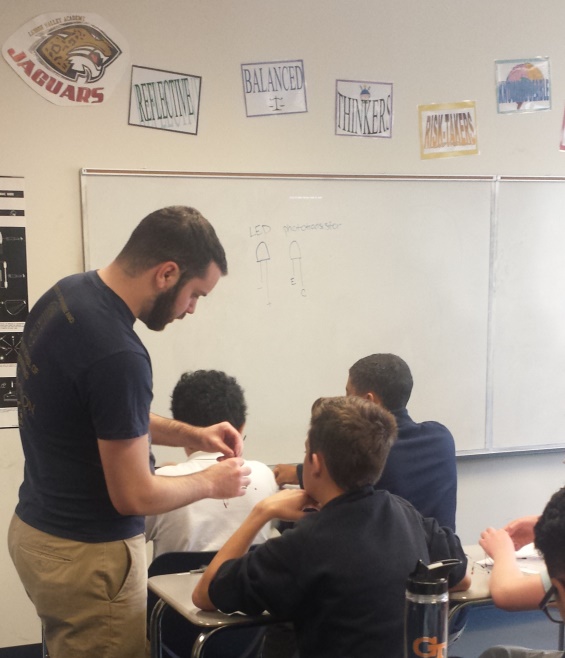