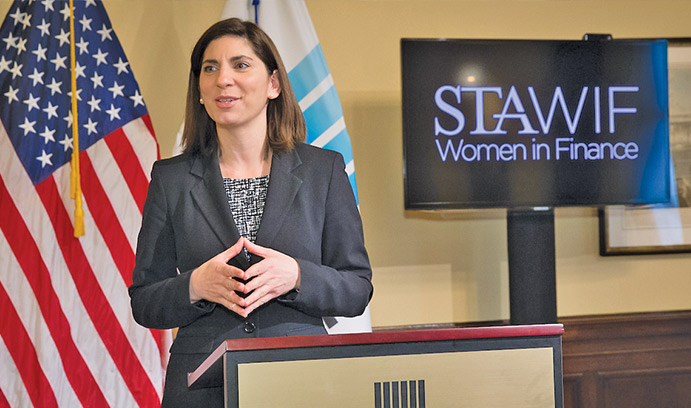 On June 23, after Britain voted to leave the European Union, Stacey Cunningham ’96 stayed up most of the night reassuring nervous Wall Street traders, money managers and regulators, many of whom believed the surprising “Brexit” vote would have an adverse effect on the U.S. equities market.

Her efforts paid off. On June 24, the market fell about 600 points in heavy volume, but trading was mostly orderly.

“We spent a lot of time over the last 10 months looking at where things could be improved,” Cunningham told the financial media the day after Brexit. “We got the benefit today.”

Cunningham credits her Lehigh industrial engineering degree for her ability to think through complex problems. She says her journey from engineering to the stock market began during a summer internship on the floor of the NYSE.

“I started off as a trading assistant, at what was then known as a specialist firm making markets in securities that were listed on the NYSE. I fell in love with it almost immediately and knew what I wanted to do.

“I spent about 10 years as a trader, matching buyers and sellers in securities for companies such as Hershey Foods, Ethan Allen Furniture and Federated Department Stores.”

Cunningham then moved to Nasdaq to run a sales team that aimed to increase trading. She returned to NYSE in 2012, ten days before Intercontinental Exchange (ICE) announced plans to acquire NYSE.

“I joined the sales team at NYSE,” she says, “[and] I focused on what I could contribute. The ICE deal closed a year later, and I stepped into the role of NYSE Head of Sales and Relationship Management.”

Last February, Cunningham supervised the introduction of NYSE Pillar, a new trading technology platform. Pillar allows customers to interact with the stock exchange using the same technology and a single API (application program interface) across all of NYSE’s markets.

Above the desk in Cunningham’s office hangs a framed certificate from 2000 that shows her trading seat on the NYSE floor.

“When I look at my evolution,” she says, “I had three defining stints—the engineering education, the trading floor and the years focused on sales and client relationships. As COO at the NYSE, I put all three together.”