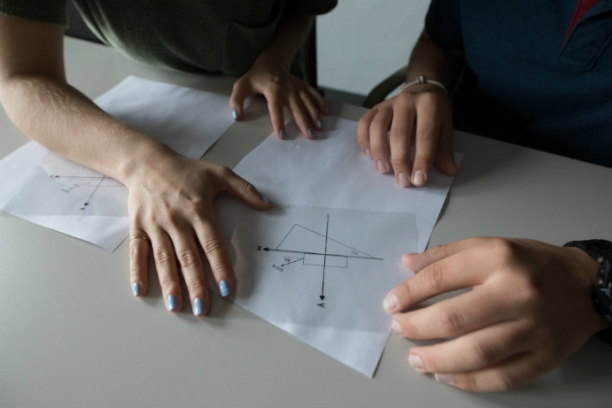 Jerome Licini has taught introductory physics at Lehigh for 31 years, perfecting his craft and continually finding ways to help his students in any way he can.

Now Licini is expanding his reach beyond the Lehigh campus by developing a full-fledged program in physics education research. Licini intends to publish teaching techniques he has developed throughout his career in hopes of making physics easier to understand for students everywhere.

The first–a tilted-axes tool–will be published in a fall issue of The Physics Teacher, a peer-reviewed academic journal that is geared toward teachers of introductory physics at the high school or first-year college level.

“I’ve been teaching intro physics here for a while and I’m specializing in it because I enjoy it and it’s fun,” Licini says. “Over the time I’ve been here, I’ve accumulated tricks to teach things, and so I’m trying to publish them now.”

While solving physics problems may not be easy, the idea for the tool is simple.

One of the challenges in introductory physics, Licini explains, is analyzing problems with different x-y axes. For instance, in trigonometry and geometry, students are always working with x-y axes that are horizontal and vertical. That isn’t the case in physics.

Licini came up with the idea of printing x-y axes on transparency film so students can use it as an overlay and turn it however they need. It simplifies the math and the thinking, he says.

“Students need to work with x-y axes that are now along the surface and perpendicular to the surface,” Licini says. “It’s helpful to see the rotation of the axes as a continuous process because a textbook can only provide a static illustration.”

Angles that are the same don’t always appear to be on first glance, and many students get bogged down in the rules for adding and subtracting angles from geometry, Licini says. But with the tool, he says, it’s easy to see which angles are the same.

Because it’s transparent, the tool can be used on homework, textbooks and even computer monitors. Licini prints small versions for the students that are easy to carry around.

Every introductory physics teacher to whom Licini shows the tool loves it and tells him they’re going to use his idea. That is what pushed Licini to share it with as many others as he could. Despite the enthusiasm from other instructors, however, getting it published wasn’t easy.  To publish, journal editors want hard evidence that a technique works, but this tool’s major impact is not on the statistics of the entire class.

Licini says that many students don’t need to use the tool because they can rationalize or see a pattern once with the angles and understand.  Others can’t see it so quickly, however, and they’ll struggle until they start using the transparency.

“It’s like a light bulb goes on,” Licini says.

Because it’s a highly significant improvement for the students who really need it, rather than a general improvement for all students, Licini says that this makes it harder to provide supporting statistical data. Although in one preliminary survey he has done, 58 percent of 161 students chose to use the transparency and then 54 percent of those who used the tool expressed that the transparency was helpful. Licini is planning a more formal study this fall.

Regardless of what any data says, Licini knows the tool is worth it even if it helps just one student.

“I’m not going to stop doing it,” Licini says.

At least two of the students Licini is working with this summer are glad he hasn’t.

“I thought it made things a lot easier,” Florencia Dayan '21, a civil engineering major who is taking Introductory Physics I, says. “It doesn’t seem like something that complex, but it helped a lot.”

George Awad ’22 is just starting as a full-time Lehigh student this fall after graduating from Allentown’s Dieruff High School but has already been introduced to Licini and his tiled-axes tool as a member of the High School Scholars program.

“When you look at the examples in the book you don’t feel like you need to use it, however, when you start solving I started rotating the paper before I got the tilted-axes tool,” Awad says. “And I just kept rotating the paper around until I got this.” 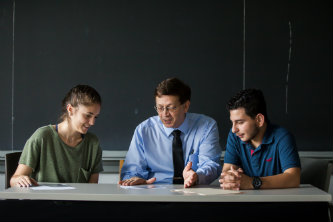