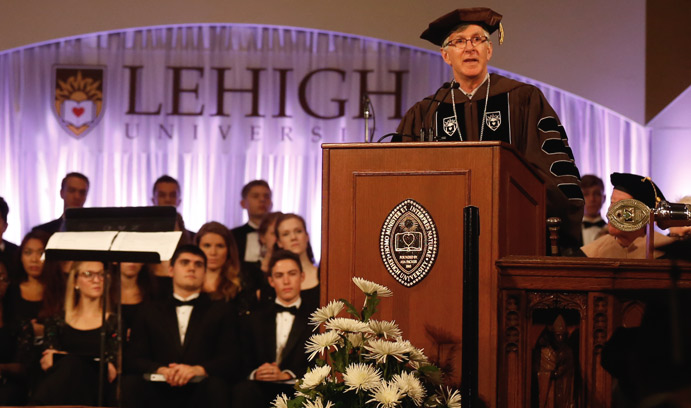 John D. Simon spoke eloquently on the power of higher education to shape the future.

At an historic 2015 Founder’s Day celebration—one that came on the occasion of the Lehigh’s Sesquicentennial—John D. Simon was formally installed as Lehigh’s 14th president by Brad E. Scheler ’74 ’05P ’08P ’09PG, chair of the Lehigh Board of Trustees.

Speaking to Simon directly, Scheler told the new president that he would have “the honorable privilege of leading the university to the fulfillment of its great promise for years to come.”

In his installment speech, Simon said Lehigh had experienced a number “pivot points” in its 150-year history, and that now was such a time.  To advance an ambitious agenda, Simon announced the Board of Trustees at their meeting this week had committed to an investment of $250 million in institutional resources in the areas of teaching, learning, research and student life.  This investment will support a comprehensive plan that will strengthen Lehigh, allow the university to leverage core strengths and build a university that will serve the needs of students and society of the future.

Simon said the funds will be used to:

“We need to be bold, take risks, push and define frontiers of knowledge, create and embrace new forms of pedagogy for engaging our students in learning and research,” Simon said. “We must modernize our infrastructure and research facilities so they do not hold back the creativity and innovation of our faculty and students. We need to reinvigorate our fields of study by integrating experiential and technology-enabled methods into the student experience.”

Simon said the university is making this institutional commitment in tandem with private commitments that will be sought through an upcoming capital campaign to “assure that we begin our next 150 years with the strength to recruit and retain the people we need to take Lehigh ever higher.”

In a 22-minute address to a packed crowd in Packer Memorial Church and an overflow crowd of 350 in Grace Hall, Simon officially accepted the mantle of his new office, and spoke eloquently of the power of higher education to shape the future. Simon drew upon several critical points in university history to illustrate the significance of adapting to the challenges of the moment, and continuing to evolve to meet the needs of society.

By founding Lehigh, 19th century industrialist Asa Packer changed the notion of what a university could be, fusing together a unique blend of academic options to provide an “education that was purposeful in its intent and wide-ranging in its application.”

Generations later, in the wake of World War II, Lehigh once again reinvented itself, and drew upon resources to evolve into a research university of international distinction.

And now, he said, there are new realities to contend with. Today’s student is likely to have a career characterized by multiple jobs and shifting roles. In order to lead and innovate, they must have the ability to think in integrative, cross-disciplinary ways, he said. Skills and knowledge must be transferable, and there is mounting pressure for multiple degrees.

The Lehigh experience, he said, “must embrace this new way of thinking and developing the human mind for the challenges faced by current generations of students.”

Packer, he said, recognized that our students—and the nation—not only needed superior applied skills, but all creativity, civic learning, communication skills and the critical thinking provided by the arts, humanities and social sciences.

Simon told the assembled crowd that he is “thoroughly convinced of the power of higher education to shape how the future world will look. While we face uncertainties in our world today, Lehigh’s purposeful approach to education will create leaders with the capacity to take on the challenges and seize the opportunities of our time. Let us all come together—as heirs to Asa Packer—and embrace our responsibilities to this next generation (and the next) and prepare them to lead their world. It is great work and I cannot think of anything more rewarding.”

Earlier in his talk, Simon welcomed many former colleagues to Lehigh and acknowledged the role they played in his career as an educator and administrator. He also thanked many family members in attendance for their support—“You are my rock and help me keep balance when life gets crazy” – and thanked the entire Lehigh community for what he called “an incredibly warm welcome” and a wonderful transition experience.

“We have been touched by the kindness you have shown us,” he said. “I have found that there are two categories of Lehigh people – passionate, and fiercely passionate.”

Simon was introduced by Robert D. Sweeny, senior vice president of advancement at the University of Virginia, and a man Simon credited with being a role model and a mentor early in Simon’s tenure as Provost at UVA.

"John Simon is an outstanding talent," said Sweeny, describing him as a good father to his two sons and a "man of good character" who lives life to the fullest. "John is a man of vision," he said. And while Simon sees the big picture, he said, he also listens to smaller concerns.

In a departure from the traditional formality of earlier Founder’s Day ceremonies, this year’s event included a live feed from the viewing party in Grace Hall, where Assistant Dean of Student Lori McClaind introduced four individuals, who each virtually presented a gift to the new president that symbolized a component of the university seal: the stars, the book, the sun and the heart. Among the gifts was a Lehigh umbrella, a fitting gift to match the weather, and a Lehigh jersey with the No. 14.

As at Packer Memorial Church, there was a celebratory atmosphere at Grace Hall, where students cheered and pounded their feet at Simon's installation. The audience also responded with sustained, enthusiastic applause for Kevin Clayton ’84, ’13P, who was welcomed back to the Board of Trustees after serving as Lehigh’s interim president during the past academic year.

Mary Ellen Alu and Kelly Hochbein contributed to this article. 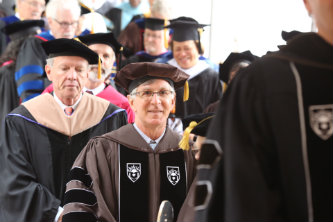 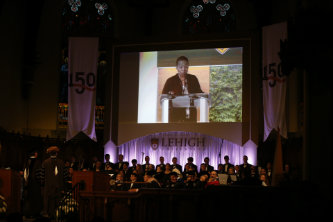 This year’s Founder's Day included a live feed from the viewing party in Grace Hall. 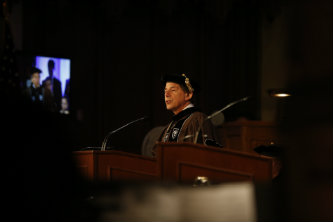 Brad E. Scheler, chair of the Lehigh Board of Trustees, said his fellow trustees had "wisely chosen" Simon to lead the university forward. 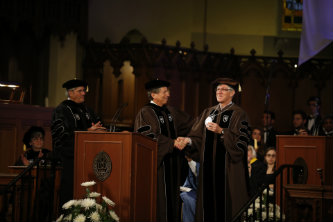 Scheler and Simon during the installation ceremony.