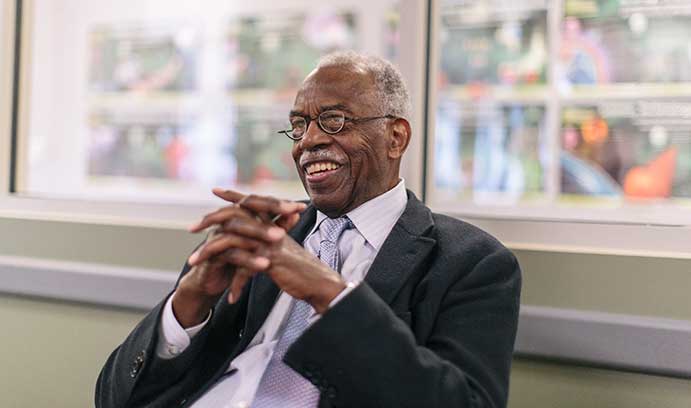 Denson, a widely respected expert in polymer engineering and fluid mechanics, was the first African-American to graduate from Lehigh. He died April 23, 2018 at age 83. Photo: Christa Neu

Costel ‘Cos’ Denson ’56 ’15H, a widely respected expert in polymer engineering and fluid mechanics and a true Lehigh pioneer who would become the first African-American to graduate from the university, passed away on April 23, 2018. He was 83.

Denson was born in Aliquippa, Pa., and in high school demonstrated great skill in academics, leadership and athletics as an honor student, class president and running back for the school’s championship football team. He applied for admission at several top schools, but was ultimately drawn to Lehigh in large part due to the Dravo scholarship program, which would cover his tuition, room and board.

During his time at Lehigh, Denson was captain of the fencing team and a member of the track and field team. He would also excel in the classroom, crediting one of his professors, Alan Foust of the department of chemical engineering, with encouraging him to push for academic success even as he was confronted with the social challenges that inevitably came along with being at the time the only African-American student on campus.

He graduated from Lehigh in 1956 and earned his commission from the U.S. Army Reserves, and then began his career as a chemical engineer with General Electric. After several years with GE, he earned a master’s degree in chemical engineering from the Rensselaer Polytechnic Institute in 1960, and in 1965 received a Ph.D., also in chemical engineering, from the University of Utah. Denson then returned to GE as manager of the company’s polymer research division.

Denson served as a visiting professor at Lehigh in 1968. In 2015, the university conferred upon him an honorary Doctor of Science.

In a 2014 Q&A for the Lehigh Alumni Bulletin, Denson reflected on his time on campus, and the struggles he endured in pursuit of a Lehigh degree.

“It was an issue sometimes when I walked around campus,” he recalled. “Some students, I noticed, would cross the street. But for the most part, the students didn’t really bother me. One of the biggest heartaches I had came at rush time. Rush was going on and there was all of this activity all evening long, there was all of this noise in the hall, and I kept waiting for somebody to knock on my door, and of course that never happened.

“And that’s one thing I wanted to talk about. When I came there, there was no Martin Luther King Jr. There was no Civil Rights Act. So what happened here at Lehigh—I really don’t know why it happened,” he said of his Lehigh admission. “They weren’t forced to do it. So what I eventually concluded was that there must have been several factors that all had to be working in concert with each other to make this happen. Everything had to be in alignment. The trustees could have said no, and for all I know, some of them did. The president had to be lined up behind it. The administrators had to be lined up behind it. Many of the faculty had been pushing for something like this for many years, and I think that was obviously a very positive thing. All of those elements had to be working in concert to have made this happen. Anybody could have vetoed it, but they let it happen. And they provided financial support, too.”

In Denson’s honor, Lehigh created last year the Dr. Costel Denson ’56 Alumni Award, which is presented to alumni who have demonstrated leadership by identifying and implementing pathways to increased diversity in both the workplace and educational institutions. Denson helped write the criteria. The award recognizes alumni who believe “that diversity is a critical ingredient in shaping a healthy, productive society and workplaces, and who have proactively worked to make this happen.”

Last year’s recipient was William Beattie '59, and this year’s will be trustee Ralph Thomas '76 ‘77G.

Former Lehigh President Peter Likins called Denson “a brave pioneer and a good man whose strength of character enabled him to forgive Lehigh for the sins of the ’50s and help his alma mater meet the challenges of contemporary life.”

Denson himself created the Costel D. Denson ’56 ’15H Endowed Scholarship Fund in 2006 for Lehigh students majoring in chemical engineering. The fund awards a scholarship to an undergraduate student, with preference given to a student majoring in chemical engineering or bioengineering and who is pursuing a minor in the liberal arts/humanities. Since its establishment, six students have been awarded; many of the students have been multi-year recipients.

“It has nothing to do with race,” he told the Bulletin. “I had a tough time but when I created the scholarship, it wasn’t just for black students, it was for excellence in chemical engineering. That’s my statement. And to me, it’s a powerful statement. I think it says a lot that I would do that—that I haven’t closed that door behind me.”

“Regardless of his challenging undergraduate experience, he re-engaged at Lehigh to help make the institution better than he found it when he arrived in the ‘50s,” Odi said. “His parting words to me about a year ago when we last spoke was, the honorary degree awarded to him by Lehigh in 2015 and the Alumni Award established in his name in 2017 completed his Lehigh Journey and for those reasons, ‘I love Lehigh.’”

Mayuresh Kothare, chair of the Department of Chemical & Biomolecular Engineering, said Denson's life story is “a shining example of how one can rise up in the face of adversity. His ability to positively use the opportunities provided by Lehigh and excel in academics, sports and leadership epitomizes the best virtues of the human spirit.

He said Denson was “deeply touched” when the department hosted a lunch meeting with him in the summer of 2015. Afterward, Kothare said, Denson sent an email that noted the great discussions he had with faculty and his meetings with students, whose questions and excitement about the field, he wrote, reinforced his “abiding belief in the Lehigh chemical engineering program.”

In Denson’s honor, Kothare said, the Department of Chemical and Biomolecular Engineering will hold an annual "Costel Denson Distinguished Lecture"  to invite leading chemical engineering professionals to deliver a seminar at Lehigh.