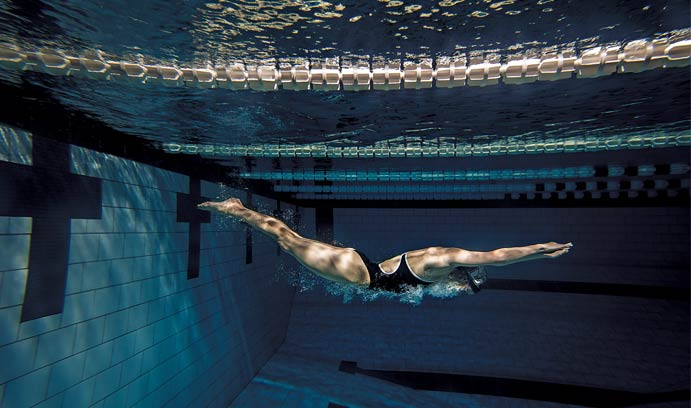 Kaitlyn Ruffing '17 is one of the most accomplished swimmers in Lehigh history.

Ask Kaitlyn Ruffing why she chose Lehigh, and her answer pretty much boils down to this: She wanted to go somewhere where she could do as much as humanly possible.

Three years into her Lehigh career, that's precisely what she's doing. Ruffing '17 is one of the most accomplished swimmers in Lehigh history—a holder of six all-time school records and, this year, a qualifier for the 2016 U.S. Olympic Trials. But to describe Ruffing as just a great swimmer doesn't even begin to tell her full story. She is a swimmer, yes, and a very good one at that. But she's also a varsity track athlete, a committed musician and proud member of the Lehigh Orchestra, and a Dean's List student double-majoring in music and biology with her sights set on medical school. Her days often start before dawn in the pool and don't end until after 10 at night with the orchestra, and even for someone as driven and talented as Ruffing, the multiple and often overlapping demands can be a lot to juggle.

But she says she just can't fathom giving any of it up. "I get that question all the time," says Ruffing, a native of Murrysville, Pa., near Pittsburgh. "But I really love to do all of the things that I do. Playing in the orchestra might be my favorite thing at Lehigh, but I love competing in sports, too. The academics are the academics, but I love doing them, too, so I can one day become a doctor."

That, of course, remains her long-term goal: getting into medical school and ultimately becoming a physician. In the short term, though, there's more than plenty to keep her busy. And that starts in the pool.

Though she is passionate about both swimming and track, Ruffing says she is a "swimmer first." And one look at the Lehigh record book confirms precisely that.

She is the Lehigh school record holder in the 100 Free, the 200 Medley Relay, the 400 Medley Relay, the 200 Free Relay and the 400 Free Relay and, most notably, the 50 Free. That's her signature event, and the one in which she registered a time of 26.14 to earn a spot in the Olympic Trials this summer. Her qualification there counts among her most treasured achievements in the sport—though it is one that was almost taken away.

Ruffing's time in the event that day was good enough to get her into the trials. Three stopwatches held by the poolside judges confirmed as much. Unfortunately, her lane's touch pad—used to automatically and precisely confirm a swimmer's time—failed, leaving Ruffing in limbo as meet officials discussed how to move forward.

"That was insane," she says. "[But the judges] were really pulling for me to have the time count. They were saying, 'Why have the watches if we're not going to count them?'"

In the end, the time counted, which means Ruffing will be joining some of the nation's very best swimmers in late June for the trials in Omaha, Nebraska. She'll be competing with dozens of top competitors for the right to grab just one of the few spots available for the Olympic Games themselves. Ruffing says she's realistic about her chances. "I'm not going into this thinking that I need to make the Olympics," she says. "It's just an amazing opportunity to be able to go to this event."

And once the trials are over? Well, there will be no rest for the weary. Ruffing will be taking the MCATs this summer, with the ultimate goal of scoring high enough to get into her dream school, the University of Pittsburgh School of Medicine. Then the fall will arrive, and the cycle will begin all over again—swimming, running, music, academics.

It's hectic, sure. But it's also precisely what drew Ruffing to Lehigh in the first place. "It's been everything I could have hoped, and more," she says. "I think Lehigh really gives everyone a chance to not do just one thing, but the chance to explore whatever it is they really want to do, and do a lot of different things along the way."

Kaitlyn Ruffing '17 is one of the most accomplished swimmers in Lehigh history. 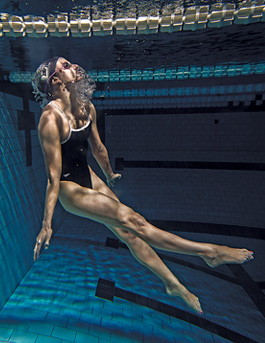 Ruffing was one of four Lehigh students who qualified for the Olympic swimming trials.