Experiments show electric field can modify silicate glass, causing parts to melt while remaining solid elsewhere; discovery suggests heat in glass could be produced on a very fine scale, could point to performance challenges for devices where glass is used, or could be employed for superior molding and shaping with much less energy 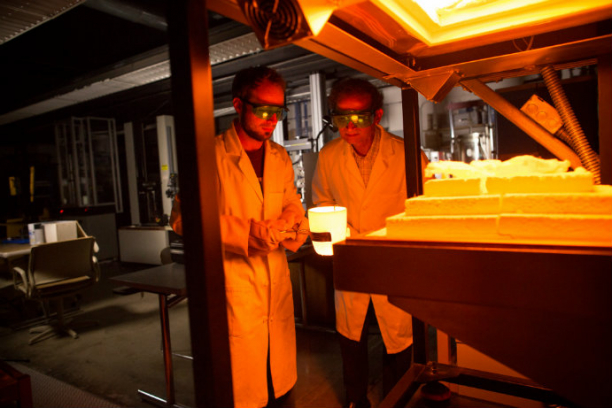 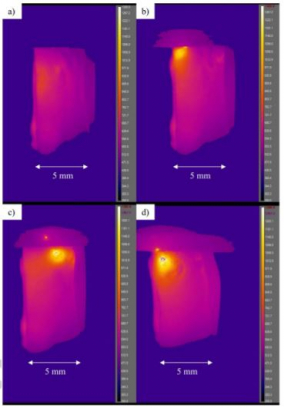 Another surprising observation of electric heating of glass is that the hot spot near the positive electrode may meander around as seen in the video frames several seconds apart in the figure here, which is featured in the paper Himanshu Jain and his colleagues have authored in Nature Scientific Reports.

Characterizing and predicting how electrically-heated silicate glass behaves is important because it is used in a variety of devices that drive technical innovations. Silicate glass is used in display screens. Glass fibers power the internet. Nanoscale glass devices are being deployed to provide breakthrough medical treatments such as targeted drug-delivery and re-growing tissue.

The discovery that under certain conditions electrically-heated silicate glass defies a long-accepted law of physics known as Joule’s first law should be of interest to a broad spectrum of scientists, engineers, even the general public, according to Himanshu Jain, Diamond Distinguished Chair of the Department of Materials Science and Engineering at Lehigh University.

“It has been verified over and over on homogeneous metals and semiconductors which heat up uniformly, like an incandescent light bulb does,” says Jain.

He and his colleagues―which includes Nicholas J. Smith and Craig Kopatz, both of Corning Incorporated, as well as Charles T. McLaren, a former Ph.D. student of Jain’s, now a researcher at Corning―have authored a paper published in Nature Scientific Reports that details their discovery that electrically-heated common, homogeneous silicate glasses appear to defy Joule’s first law.

In the paper, titled “Development of highly inhomogeneous temperature profile within electrically heated alkali silicate glasses,” the authors write: “Unlike electronically conducting metals and semiconductors, with time the heating of ionically conducting glass becomes extremely inhomogeneous with the formation of a nanoscale alkali-depletion region, such that the glass melts near the anode, even evaporates, while remaining solid elsewhere. In situ infrared imaging shows and finite element analysis confirms localized temperatures more than thousand degrees above the remaining sample depending on whether the field is DC or AC.”

“In our experiments, the glass became more than a thousand degrees Celsius hotter near the positive side than in the rest of the glass, which was very surprising considering that the glass was totally homogeneous to begin with,” says Jain. “The cause of this result is shown to be in the change in the structure and chemistry of glass on nanoscale by the electric field itself, which then heats up this nano-region much more strongly.”

Jain says that the application of classical Joule’s law of physics needs to be reconsidered carefully and adapted to accommodate these findings.

These observations unravel the origin of a recently discovered electric field induced softening of glass. In a previous paper, Jain and his colleagues reported the phenomenon of Electric Field Induced Softening. They demonstrated that the softening temperature of glass heated in a furnace can be reduced by as much as a couple of hundred degrees Celsius simply by applying 100 Volt across an inch thick sample.

“The calculations did not add up to explain what we were seeing as simply standard Joule heating,” says Jain. “Even under very moderate conditions, we observed fumes of glass that would require thousands of degrees higher temperature than Joule's law could predict!”

The team then undertook a systematic study to monitor the temperature of glass. They used high-resolution infrared pyrometers to map out the temperature profile of the whole sample. New data together with their previous observations showed that electric field modified the glass dramatically and that they had to modify how Joule's law can be applied.

The researchers believe that this work shows it is possible to produce heat in a glass on a much finer scale than by the methods used so far, possibly down to the nanoscale. It would then allow making new optical and other complex structures and devices on glass surface more precisely than before.

“Besides demonstrating the need to qualify Joule's law, the results are critical to developing new technology for the fabrication and manufacturing of glass and ceramic materials,” says Jain.