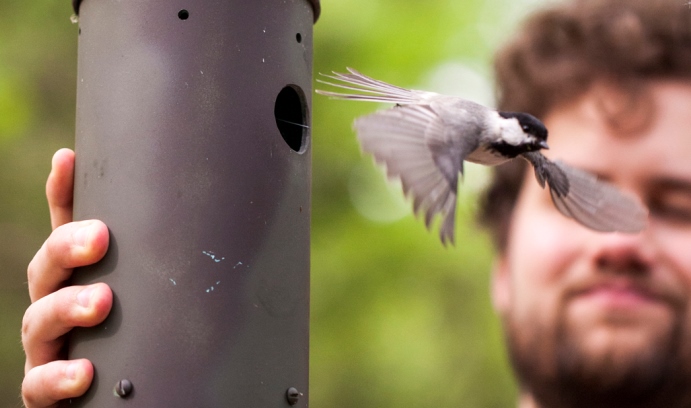 Researchers found that hybrid chickadees have marked deficiencies in learning and memory compared to their pure species parents, which may be another selective disadvantage.

For a long time, hybridization—when distinct species mate and produce offspring—was thought to be a mistake. Yet, advancements in genomic testing tools have revealed naturally occurring hybridization as a fairly common phenomenon—with a role in natural selection, in some cases.

Scientists estimate that as much as 10 percent of animals—and 25 percent of plants—engage in hybridization in nature. Genetic data has even shed light on modern-day humans’ hybrid ancestry, with most Europeans and Asians thought to have approximately 2 percent Neanderthal DNA.

Sterility is common in hybrids and is thought to be a key factor in keeping two hybridizing species distinct. This is true for a particular hybrid chickadee population in the U.S., the result of mating between the northern Black-capped Chickadee and a southern species called the Carolina Chickadee. A lower percentage of the hybrid chickadees’ eggs hatch compared to their pure-species parents—a key selective disadvantage.

The results of a new behavioral study out of Lehigh University and Franklin & Marshall College add a wrinkle to this paradigm: Scientists found that hybrid chickadees have marked deficiencies in learning and memory compared to their pure species parents, which may be another selective disadvantage.

This discovery is the first time that learning and memory deficiencies have been identified in any hybrid of any species, opening up a new area of inquiry for understanding hybrids’ selective disadvantage. The study results appear in the journal Evolution in an article by Michael A. McQuillan, Amber M. Rice and Alex V. Huynh of Lehigh University and Timothy C. Roth II of Franklin & Marshall College called “Hybrid Chickadees are Deficient in Learning and Memory.”

“These birds are like squirrels: They store food throughout the fall,” says Rice, assistant professor of biological sciences. “To survive winter, they have to be able to go back and find the food. The fact that these hybrids are worse at learning and remembering could really be bad for them, especially during harsh winters.”

Animals who store food in this manner are known as scatter-hoarders. According to McQuillan, a Ph.D. candidate in evolutionary biology at Lehigh and lead author of the study, the northern Black-capped Chickadee is a model species for studying spatial memory and learning, traits that are key to scatter-hoarders’ survival. McQuillan says there is evidence to suggest that the Black-capped Chickadees’ spatial memory is a heritable trait—a trait passed down to their offspring.

“If hybrid chickadees are less innovative, less able to adjust to their environments, they might be less likely to survive,” says McQuillan. “That might be a factor in keeping the two species separate—or reproductively isolated—despite the fact that they are hybridizing.”

Perhaps even more importantly, the team’s findings suggest that learning and memory may contribute to the selective disadvantage of hybrids of other species as well.

According to Maria R. Servedio, a professor of biology at the University of North Carolina at Chapel Hill whose research areas include speciation and the evolution of premating isolation, these results are exciting because there has been speculation about behaviors essential to survival and reproduction being disrupted in hybrids, but very few well-established examples.

“This study is really interesting because it provides a completely new mechanism by which hybrids can have low fitness,” says Servedio. “When hybrids have low fitness this in turn can provide selection for parents to become more selective in choosing mates, which is an important mechanism in keeping species apart—so it can have cascading effects.”

Crossbred Chickadees: “They Would Try and Then Give Up”

Lehigh University is located within the “hybrid zone,” a narrow band from northern New Jersey to Kansas where this population of hybridized chickadees reside, which presents a unique opportunity to study them.

To test the birds’ spatial memory, he constructed a wall containing 60 identical rubber pockets, the contents of which were concealed with a white craft pom pom. One of the pockets contained a wax worm, a highly-desired food item.

The birds were introduced to the wall of pockets in the same manner once a day for seven days. This offered an opportunity to observe how well the birds remembered the location of the worm, which was always concealed in the same pocket.

“The first day it’s random chance,” says Rice. “Each subsequent day, the birds should get better and better at locating the pocket with the worm in it.”

The hybrids performed worse across the testing period than either pure species.

“On average the hybrids took longer, requiring more inspections to locate the worm,” says MacQuillan. “The hybrids made more errors and simply didn’t remember as well.”

There was no significant difference in performance between the two pure-species groups.

To test their learning skills, McQuillan presented the birds with a novel problem to solve. A worm was placed into a small well drilled into a block that was attached to an aviary wall. The team trained the birds to feed from the well by regularly placing worms in it. During the test, McQuillan placed a circular washer with a transparent coating over the well. The birds could see the worm through the washer, but would have to figure out how to move the washer in order to access the worm.

The hybrids were significantly less likely to solve this problem than the pure-species birds.

“The hybrids would try and then give up,” says McQuillan. “If they didn’t get it within the first few minutes, they weren’t going to get it all. That trend became clear.”

The cognitive abilities of natural hybrids is an unexplored area of research. These results offer new avenues of inquiry to better understand this population of hybridizing chickadees, as well other hybrid systems. It also opens up new areas of study regarding speciation more generally.

"Evolutionary biologists tend to focus on the physiological deficits that plague hybrids as a phenomenon that maintains chickadee species’ boundaries,” says Roth, an assistant professor of psychology at Franklin & Marshall. “However, our research suggests that declines in the cognitive abilities of hybrids may also play an important role in maintaining species.”

The next steps of the hybrid chickadee project involve delving deeper into what might be behind the learning and memory deficiencies they found, including exploring possible genetic and physiological causes.

“We’re planning to follow up with additional behavioral tests to look at whether controlling the chickadees’ experiences and environments has an impact on the results,” says Rice. “Understanding the underlying neuroanatomy could be the next steps in exploring what explains their cognitive deficiencies. For example, are specific regions of their brains smaller? Do they have fewer neurons, or less neurogenesis than their pure-species parents?”

Roth, whose research is focused on understanding the processes by which natural selection influences the use of space in animals, is taking the lead on studying the chickadees’ neuroanatomy.

“We are currently in the process of identifying differences in gene expression and neuroanatomy in these birds to better understand the neural mechanisms of these cognitive deficits,” says Roth.

Video by Michael A. McQuillan