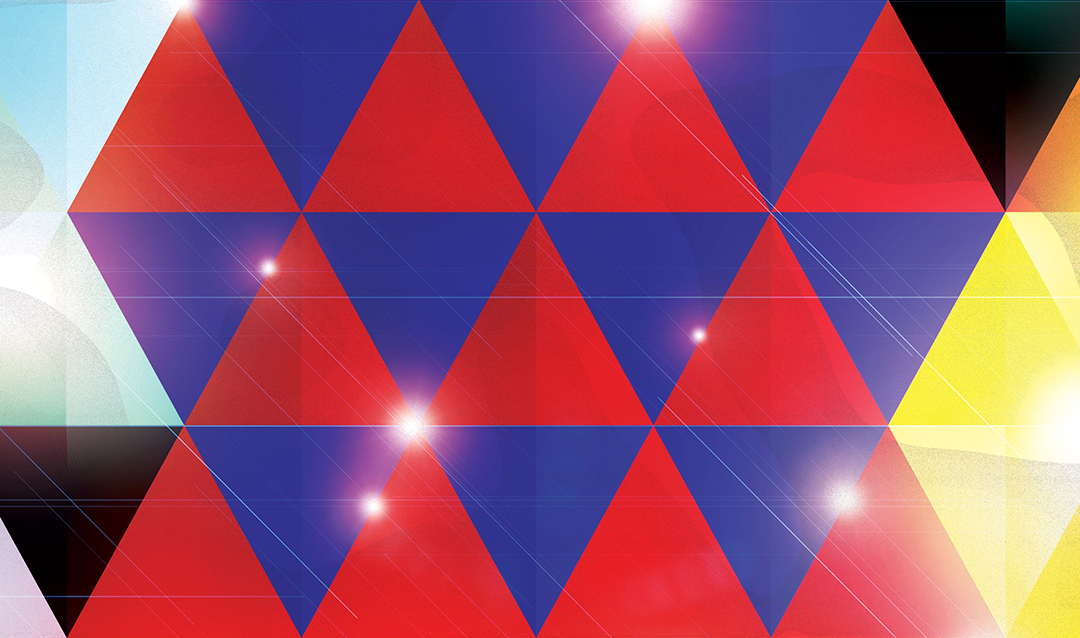 Slowly adding heat during atomic layer deposition while using an electron beam to monitor the process, Nicholas Strandwitz is helping technology to continue to shrink.

Cell phones and laptops have become necessities in today’s society. They are ingrained in our daily lives, yet in the hundreds of times we use these devices per week, we might not pause to think about what makes them tick.

These electronic gadgets, along with countless others such as solar cells, wouldn’t be possible without transistors—semiconductor devices that are similar to a light switch. Over a billion transistors are needed to operate today’s smartphones, and computers require even more. And as technology has progressed over the past few decades, with the exception of cell phone screens, devices keep shrinking. As a result, transistors must shrink, too. 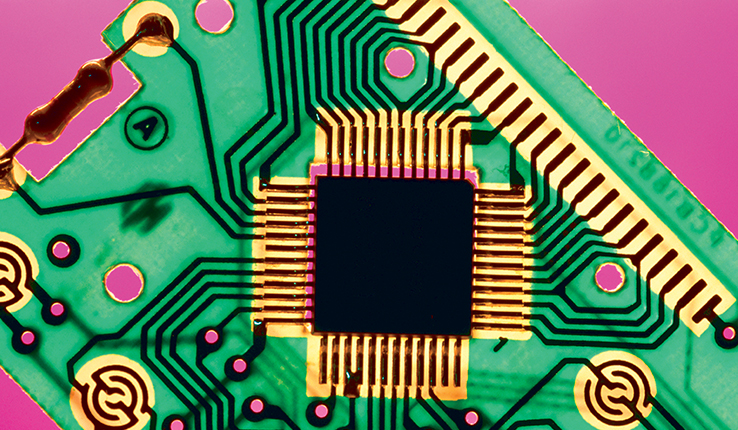 Strandwitz is attempting to develop a new method of growing materials that could pave the way for the future of computing hardware.

Today’s transistors are already extremely small, with some measuring at 10 nanometers and others even smaller, says Nicholas Strandwitz. They are comprised of thin films made from some tens of layers of atoms or molecules. A single film in a transistor, for example, can be just 2.5 nanometers thick.

Strandwitz, the Harold Chambers Junior Professor in Materials Science and Engineering, specializes in a thin film growth process called atomic layer deposition (ALD). By monitoring temperature during the creation of films through thermally modulated ALD, Strandwitz is attempting to develop a new method of growing materials that could allow transistors to continue to shrink—and pave the way for the future of computing hardware.

The Importance of Temperature

Because small devices require small films, the precise thickness of layers is crucial—just a half nanometer too thin or too thick will keep the device it’s installed in from operating properly. The ALD process requires multiple cycles to achieve the desired film thickness: “Every time you do this process ... you get about a tenth of a nanometer, which is an angstrom,” Strandwitz says. “You get about one atomic layer at a time, so that’s why it is called atomic layer deposition.”

Temperature is a critical part of the ALD process. The temperature must be low enough—300 degrees Celsius and lower—so the molecules don’t break apart on their own, which would cause them to break apart on the surface, leading to the buildup of many layers because the reaction will no longer be self-limiting, Strandwitz explains. This is known as decomposition.

The lower temperatures of conventional ALD provide less thermal energy. The resulting material, therefore, often remains disordered, and atoms arrange themselves in an amorphous, or “glassy,” state. At a higher temperature, and with more thermal energy, atoms can rearrange themselves into a crystal, or an ordered array of atoms. Certain applications require the material to be crystalline versus amorphous because the different states have different properties. Strandwitz’s goal, by monitoring and adjusting the temperature, is to help atoms rearrange into a crystal film.

The idea behind the entire project stems from Strandwitz’s materials chemistry background, which he says inspires him to consider how to make things. In this case, he thought about how to access high-quality crystalline materials with the ALD technique.

You need to add energy, he says, but adding too much means it’s no longer ALD.

“You will blow apart all your precursor molecules if it’s really hot,” Strandwitz says.

Next, Strandwitz considered separating the steps of the process: What if he put the material down, completed a thermal process, and then put more material down? The process could be repeated “like another cyclic aspect of the deposition,” he says.

Strandwitz proposes beginning growth at the lower conventional ALD temperature but then slowly heating it up and watching layers rearrange and crystallize.

“We’re trying to take this technique of ALD and access high-quality crystalline material with it by using this kind of gentle heating process,” Strandwitz says. “The deposition part is the same in both of these. All we are doing is heating, in between, some of those to crystallize it … One of the unique things is, if you are not watching it, how do you know what’s going on in the surface?”

To measure the arrangement of atoms, Strandwitz envisions using reflected high energy electron diffraction (RHEED) monitoring and analysis. He plans to attach an electron beam to a conventional ALD system. He will place the beam at a very shallow angle and bounce it off the surface, he says, where it will interact with only the outermost layer of atoms. If the beam is too direct, he explains, it will interact with the top 100 atoms or so—something Strandwitz hopes to avoid.

After the beam bounces off the surface, it will hit an electron capture screen, where it will glow or light up, Strandwitz says.

Strandwitz compares RHEED monitoring to seeing a puddle in a parking lot that looks rainbow-colored because it has oil on its surface: It’s just white light from the sky reflected off the water-oil interface, he explains. The oil layer, which is several hundreds of nanometers thick, creates constructive and destructive interference of the light rays. Light rays that destructively interfere aren’t seen, removing certain colors from sight, and light rays that constructively interfere are seen better, enhancing certain colors.

The same thing happens with the electron beam in measuring the thermally modulated ALD with RHEED monitoring.

“If you have an ordered array of atoms, those electrons interfere with each other and you get what’s called diffraction, and [you] get information about the arrangement of the atoms,” Strandwitz says. “If they are in a crystalline, ordered-array ... you will see lots of spots. And if it’s disordered, there’s no diffraction. You just kind of get scattering and you don’t get any spots.”

From there, a camera records images to be processed.

“It’s all about studying this transition,” Strandwitz says. “If we can study it and understand it, then we can control it. Then someone can imagine manufacturing films using this technique, and they would understand it very well because we would have built some scientific basis for it.”

Next Steps for ALD

The ALD process dates back to the 1950s, Strandwitz says, and it became more developed in the 1970s before it was adapted by the industry in the early 2000s for integrated circuits. But Strandwitz’s thermally modulated variation doesn’t yet exist.

“There are a couple papers out there that [do] something sort of similar but not quite,” Strandwitz says. “And combining it with the electron beam to watch what’s happening—that’s not been done.”

Strandwitz has hired a Ph.D. student, Alexandra Howzen, whose first task is to design the system they’ll use. The team isn’t starting from scratch, however: They have a functioning conventional ALD growth system already available, built at Strandwitz’s direction by students participating in Lehigh’s Mountaintop Summer Experience.

As far as what applications his new process could be used for, Strandwitz isn’t positive, at least not yet.

“There’s so many areas it could be used in, but it’s not super obvious to plug it in here and it will be revolutionary,” Strandwitz says. “But if we use the example of computing and micro- and nanoelectronics, everything is shrinking and shrinking and shrinking, and you need more control of film thickness and uniformity. We need techniques to grow material. So this could be used to continuously shrink down the size of these components, and then you could pack more on the chip and have a better or more efficient computer.”

Strandwitz’s project is supported by a CAREER Award from the National Science Foundation (NSF).

Two to three years from the inception of Lehigh’s Mountaintop Summer Experience, which invites faculty, students and external partners to come together and take new intellectual, creative and/or artistic pathways that lead to transformative new innovations, Strandwitz realized he might be able to gather students to build an instrument that deposits thin films to build transistors: a functioning Atomic Layer Deposition growth system.

Building a conventional ALD system would pave the way for Strandwitz to begin research on his idea for thermally modulated ALD.

Strandwitz purchased a few components, and, along with other left-behind items found in their lab, the students on the project team had the materials necessary to help construct the ALD system. Strandwitz encouraged the team to get creative.

“I tasked them with ‘build this instrument, but think about what you could do creatively with it in terms of, could you add something to it that would give it some in-situ metrology?’” he says. Possibilities included, for example, measuring the film or using a laser to heat it up while it’s growing.

Although the group of students didn’t modify the ALD system themselves, they built it so it could be modified at some point in the future. Strandwitz included the project, along with a photo of the students and their system, in his successful National Science Foundation CAREER Award proposal.

Strandwitz included in the proposal that, if funded, the team would modify the ALD system for their RHEED monitoring and analysis.

“[Building the conventional ALD system] helped lay some of the groundwork for getting funded,” Strandwitz says.

This story originally appeared as "The Future of Computing Hardware" in the 2019 Lehigh Research Review.