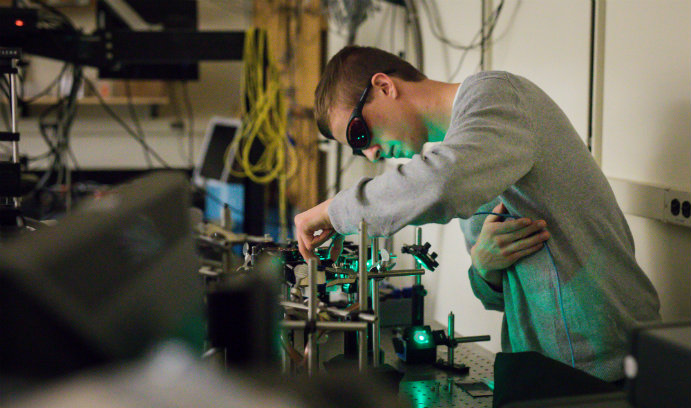 Eric Wolf ’20 studies quantum beats, a phenomenon that arises whenever a quantum mechanical system can follow more than one path to reach a final state. He was named first author on a paper published in the journal Applied Physics Letters.

Eric Wolf ’20 has always sought to understand how the world works at its most fundamental level. This year, he gets to contribute to the wealth of knowledge in his field: physics.

Originally from Stroudsburg, Pa., the physics major and intended double minor in German and mathematics worked with the research team of Ivan Biaggio, professor of physics, on a publication titled “Quantum Beats of a Multiexciton State in Rubrene Single Crystals.” Wolf successfully detected these beats for the first time and was heavily involved in writing the paper, leading Biaggio to decide that Wolf deserved recognition as the paper’s first author. The paper was published in the journal Applied Physics Letters.

“I was obviously very happy when I found out that Professor Biaggio thought that was how the ordering should go,” Wolf says. “He and I are not the only ones on the paper, of course, but since I came to Biaggio and said, ‘Look, these are happening,’ the ordering made sense.”

Wolf took his first physics class at Lehigh during his freshman year. This was PHY 21, an introductory electricity and magnetism course taught by Biaggio. Following the course, Wolf reached out to ask about getting involved with research and joined Biaggio’s lab to study quantum beats.

“While he was taking  PHY 21, Eric often stopped to discuss some open-ended questions and some specific homework problems that I made up,” Biaggio says. “Eric was characterized by his curiosity and willingness to work on some more challenging material that I always provide as optional extra work in my introductory class. In his case, Eric always enjoyed doing everything that I suggested and also often went further.”

Quantum beats are a phenomenon that arises whenever a quantum mechanical system can follow more than one path to reach a final state, and the “difficulty” of taking each path oscillates with time. The system studied by Wolf was related to excitations, created by photon absorption, that can move around in a crystal like particles, transporting the photon energy. These excitons have different energies depending if their electronic angular momentum is zero (singlet excitons) or not (triplet excitons), and their behavior is important for future solar energy applications. The quantum beats observed by Wolf happen when a singlet exciton created by photon absorption undergoes fission into two triplet excitons with half the energy that later can again fuse into the original singlet exciton, which then can release a photon. The probability that this happens oscillates in time, leading to a glow that fluctuates between bright and dim, creating a measurable “beat.”

Wolf says the phenomenon of quantum beats falls under the umbrella of methods called multiple exciton generation (MEG), techniques that interest physicists because of their potential use in solar cells. Normally, when  photons are absorbed in a solar cell, high energy photons contribute the same amount of electrical energy as low energy photons, which is wasteful.

Using MEG, Wolf says, excess energy can be contained in the system and used more efficiently. Determining the quantum beats were truly happening, however, was the most trying part of his research.

“It’s really difficult, when you know how these things are ‘supposed’ to look, to be very, very honest with yourself,” Wolf says. “It’s avoiding an internal bias. The longer the experiment, the easier it is to fool [ourselves] looking at every result we claimed was true and saying, ‘Are we sure that this is correct?’”

Biaggio says undergraduates like Wolf, while initially lacking the full range of theoretical understanding about the effects they work with in the lab, can bring novel ideas into the research that may sometimes be outside the structured thinking of experts and play an important role in the research process.

“A person alone without expertise and theoretical underpinnings cannot do much,” Biaggio says. “But if such a person works inside a research group where these things are present, they still have much to contribute. It’s not necessary to know everything about quantum mechanics in order to have an understanding of what might be necessary in an experiment.”

Wolf says he appreciates the independence he’s afforded working with Biaggio, and looks forward to continued work in his research and studies during his time at Lehigh.

When he’s not in class or the laboratory, Wolf serves as treasurer of the Society of Physics Students and plays trombone in the University Wind Ensemble. Wolf also received the Robert W. Blake Memorial Award in 2017 for high scholastic achievement, and his team placed 34th in the nationwide William Lowell Putnam Mathematical Competition. 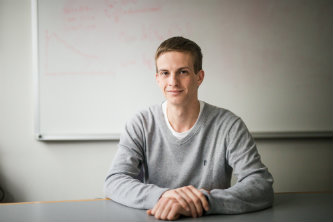 Wolf pursues his passion for physics in the lab of Ivan Biaggio, professor of physics. Biaggio says undergraduates like Wolf can bring novel ideas into the research that may sometimes be outside the structured thinking of experts.