A remarkable performance for a momentous occasion

Darest Thou Now, O Soul, a new work composed and conducted by Steven Sametz, the Ronald J. Ulrich Professor of Music and director of Lehigh University Choral Arts, was commissioned by Lehigh for this year's Founder's Day ceremony. The product of a unique Mountaintop project, the performance invited audience participation through a student-created website and light sculpture.

As he set about establishing Lehigh 150 years ago, Asa Packer may have observed in Bethlehem’s night sky a unique astronomical event: the eruption of Eta Carinae, a massive binary star located more than 7,000 light years from Earth, the light from which would have first reached our planet at about the time of the university’s founding.

Fast forward to Oct. 2, 2015. A different type of light illuminated Packer Memorial Church during Lehigh’s Founder’s Day ceremony: a cube of 340 LED light bulbs, 10 feet in length on each side and suspended with aluminum pipes and aircraft cable from the church ceiling, the physical representation of months of creative effort by a diverse and talented Mountaintop team.

The light sculpture served as a visual and interactive focal point of the performance of Darest Thou Now, O Soul, a new work composed and conducted by Steven Sametz, the Ronald J. Ulrich Professor of Music and director of Lehigh University Choral Arts. Commissioned by Lehigh, the piece’s lyrics were those of Walt Whitman’s 1868 poem of the same name, and the work was scored for choir and solo saxophone, brass, percussion and organ.

Sametz and his team provided an inspiring experience worthy of the momentous occasion for which it was created—a Founder’s Day marked by the installation of John D. Simon as Lehigh’s 14th president and the kickoff of the university’s Sesquicentennial celebration. To the audience, the five-minute multi-sensory spectacle may have seemed somewhat effortless. However, months of trial and error, discovery and debate paved its way.

‘A reflection of the entire university’

One year ago, Sesquicentennial co-chairs Joe Kender, vice president for advancement, and Vince Munley, deputy provost for faculty affairs, approached Sametz about writing a new piece for the celebration. Sametz wanted to make the performance ‘more a reflection of the entire university,’ and so began a campus-wide conversation, its participants spanning colleges, disciplines and roles.

“It started becoming this sort of confluence of everything that goes on at a university with the conduit of art,” said Sametz. “And to me, that was already very powerful.”

Sametz determined that the performance would include audience interaction, which would require knowledge and skills beyond the musical. He discussed the ambitious project with several members of Lehigh’s choir, including Connor Tench ’15, a computer science student who had participated in Lehigh’s Mountaintop program twice before. Tench suggested the project might be well-suited for Mountaintop, which fosters interdisciplinary collaboration.

The resulting Mountaintop team, a collection of graduate and undergraduate students from a variety of majors and areas of interest, began work in mid-May atop South Mountain. Tyler Seip ’14 ’15G, Daniel E.Y. Shin ’14 ’16G, Natasha Thalla ’18G, Trevor Davis ’15 ’16, Hannah Han ’15, Christopher Hoke ’16 and Geordan Johnson ’16 joined Tench and Sametz on the creation of the piece.

Inspiration came in the form of the eruption of the Eta Carinae and the firing of nerves in the human brain—bursts of energy within the larger universe and within the individuals who comprise Lehigh University. Student and faculty expertise in astrophysics, neurobiology, cognitive science, computer science, computer engineering and the humanities informed the team’s work. Visits from consulting faculty members deepened student understanding of related subject areas.

Each team member had a specific assignment based on individual skills. Seip, a masters graduate in computer science, applied his knowledge of computer science and algorithms to develop a physics engine, graphic driver, and communication protocol for the light sculpture and the app. Tench, a computer science student continuing his research at Lehigh, applied his knowledge of computer science to design and develop the front end of the web application with Johnson's assistance. Shin, a master’s student in computer engineering, applied his knowledge of electrical engineering and signal systems to configure the hardware implementation. Shin also managed the broad scope of project, communicating with consultants and internal organizers. Thalla, a doctoral student in psychology, applied her understanding of the psychology of rituals to determine expected outcomes for possible configurations of the light sculpture, audience, and performers. Davis, a physics and applied mathematics student with a minor in astronomy, together with Johnson, identified patterns in data from Eta Carinae on which Sametz could base musical structure. Hoke, who studies behavioral neuroscience, worked on how the team might allow the collected audience response to represent neural activity on the sculpture. Han, an architecture and art student, provided insights on sculpture design.

In summer, as the team worked on the project, they spoke about the complexity and significance of their assignment.

“I’ve been really appreciative of every time we have a professor come and consult with us,” said Hoke in June. “We have a lot of experts who are really interested in what we’re doing and they’re trying to help out. I feel like a good ambassador to my specific field. Everybody on the team is an ambassador and we’re coming to talk about this and try to make something happen for the greater good of Lehigh.”

“[In this project,] the abstract knowledge you gained at Lehigh is finally being physicalized and actualized in this really cool event in a space and with an audience that’s really important,” said Thalla. “It kind of validates what you’ve done.”

Students also found themselves outside their respective comfort zones.

“There’s a lot of behind the scenes work that everybody’s contributing to—administrative, conversations about what we want to do artistically, which I did not expect to be doing. It’s incredibly challenging for me but also very cool at the same time,” said Tench in June. “With the stakes the way they are on this project, everybody has to participate in conversations that they aren’t necessarily familiar with. ... The back and forth that I’ve been seeing in response to that has been really cool.”

The “ambitious, yet complex quest” of creating an experience that would capture the spirit of Lehigh “put us all in the middle of nowhere in the beginning,” said Shin. Group members were challenged to consider the group’s overall goal as well as their own contributions to the effort. They debated, explored and rejected countless potential approaches before finally settling on one.

“I had an idea of what I thought [the performance] would look like, but I came into this knowing that with a project as ambitious and as not-yet-perfectly well-defined as this one, I have to be ready to just let go of any image of what I think should be the case,” said Tench.

“We hope that the performance will in some way hallow the space,” said Seip at the beginning of their work. “We don’t want it to be vaguely holy or something. Not religious, but...”

‘A goal beyond our imagination’

On Founder’s Day, musicians filled Packer Memorial Church with song and the enormous light sculpture illuminated the space, bringing an additional burst of energy to an already celebratory atmosphere.

Audience participation via the student-created website influenced the performance in real time. Audience members in both Packer Chapel and at the viewing party in Grace Hall accessed the website by smartphone. The site invited participants to measure their level of engagement with the music by touching the symbol on the webpage that represented how the music made them feel. The collected data then transformed the colors of the light sculpture, which in turn affected the electronic enhancement applied to the live sound of the choir. The resulting sound triggered the next set of audience responses.

“Seeing an abstract idea manifest as a physical reality is both a fascinating and fruitful experience,” said Thalla.

“It's not an everyday opportunity to be provided all the resources that you need to be playful and creative with your knowledge and skills,” said Shin. “Lehigh University and the Mountaintop program gave us this unique chance, and I'm proud to say that we've achieved a goal beyond our imagination, and learned lessons which cannot be taught in a lecture hall.”

‘Lehigh at its best’

The team’s accomplishment did not go unnoticed.

"The Founder's Day performance by the choir led by Steven Sametz was a highlight of the ceremony,” said Kender. “As creative and beautiful as the piece was, what was most meaningful to me was the manner in which Steven and the team integrated with so many other individuals on campus. ... This was a true Lehigh production reflecting the very best of who we are.”

"And Steven made it back-to-back home runs of community engagement by conducting his composition in a way that completely engrossed the Founder's Day ceremony audience within all dimensions of the performance," added Munley.

“The performance showcased our students' talents, ingenuity and dedication," he said. "The interactive light sculpture and web application, completed hours before the presidential installation, complemented a virtuoso performance by the University Choir, brass, organ, percussion and electronically enhanced saxophone. The audience interaction guided the sounds of the piece, creating a sense of community through the performance.”

“Darest Thou Now, O Soul presented Lehigh at its best: a confluence of science, engineering and the arts involving students, faculty, staff, alumni and the gathered community. It made for a landmark creative moment in Lehigh's history.” 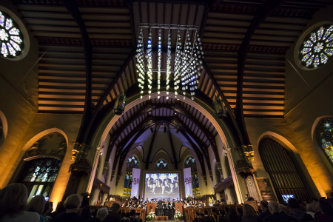 “The performance of Darest Thou Now, O Soul was stellar, and I mean that literally and figuratively. To mark the Sesquicentennial, the Mountaintop team and Professor Sametz creatively responded to an astronomical event from the time of our founding by incorporating the poetry of Whitman in combination with the most current technology in audio and visual design,” said Nadine Sine, professor of music. 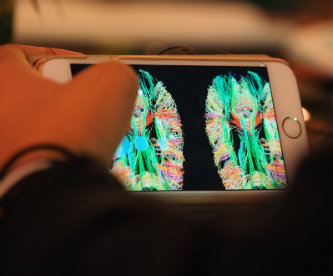 "The added element of audience participation through a phone app made it a genuinely unique experience, and the performance was breathtaking," said Sine. 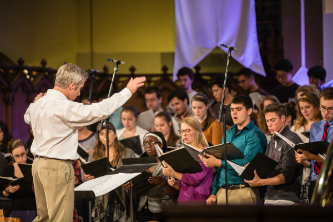 Steven Sametz, the Ronald J. Ulrich Professor of Music and director of Lehigh University Choral Arts, directs a rehearsal on the eve of Founder's Day. 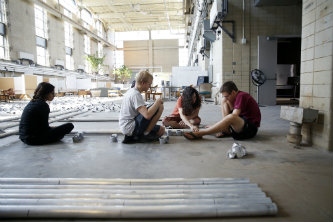 The Mountaintop team assembled a light sculpture composed of 340 LED light bulbs, 10 feet in length on each side. 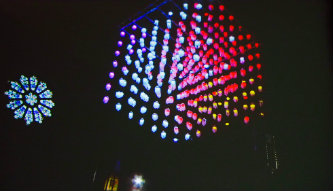 “Seeing an abstract idea manifest as a physical reality is both a fascinating and fruitful experience,” said doctoral student and Mountaintop team member Natasha Thalla.