'A great citizen of Lehigh' 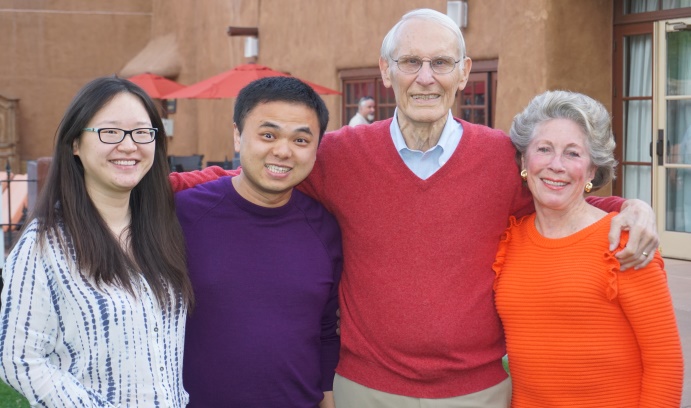 Jim Gunton (second from right) will be honored at a symposium in the department of physics on Sept. 21. Here he is shown in a recent photo with his wife, Peggy (right), with Wei Li ’12 Ph.D. (second from left), a postdoctoral researcher at Oak Ridge National Laboratory, and with Li’s wife, Hui Jia ’13 M.S. (industrial engineering). (Photo courtesy of Gunton-Fest organizers)

Jim Gunton was working through a physics problem with a student a number of years ago, and the blackboard in his office was filling up fast with equations.

Suddenly Gunton stopped writing and turned to face his student.

The story is one of many that James D. Gunton’s former colleagues and students are recounting in this the year of his 80th birthday and his formal retirement from Lehigh.

In April, his family and close friends held a birthday party for Gunton, who is a professor emeritus of physics and a former dean of the College of Arts and Sciences.

In May, his colleagues and students held a two-day “Gunton-Fest” in Santa Fe, New Mexico, to celebrate Gunton’s contributions to applied statistical physics.

And on Sept. 21, Lehigh’s department of physics will host its own symposium to honor Gunton. The event will run from 3:30 to 5:30 p.m. in the auditorium of Lewis Laboratory and will include addresses by Gunton and three of his former colleagues.

Gunton joined the Lehigh faculty in 1988 when he was appointed dean of the College of Arts and
Sciences. He served as dean until 1994, took a leave of absence to serve as provost of Kenyon College in Ohio, and returned to the Lehigh physics department faculty in 1995.

Before coming to Lehigh, Gunton had been a physics professor for 20 years at Temple University, where he also directed the Center for Advanced Computational Science and the Institute for Surface and Interface Science. In his career, he has been a Rhodes Scholar at Oxford and a visiting professor or scientist in Japan (three times), Switzerland (twice), Germany, France and Mallorca.

Colleagues and former students praise Gunton for his work ethic, for his integrity and fairness, and for the abundant enthusiasm he had for his research and for the people around him.

“Jim has a very uplifting personality,” says Michael Stavola, professor of physics at Lehigh. “You can’t talk to Jim for five minutes and not feel good—you just can’t.

“There’s a saying that really good people are really good no matter what they’re doing. Jim Gunton is one of those people. He was very good as dean, and as a scientist, the quality of his research is absolutely outstanding.”

“In many ways Jim Gunton is a great teacher,” Thienbao Nguyen Carpency, a Ph.D. candidate at Lehigh, said at Gunton-Fest. “[His] counsel as a Ph.D. adviser pales in comparison to his genuine care as a friend.

“Every time I enter his office, the first thing that Jim will ask me, before anything else, is how I am doing. He told me once that if I ever needed to talk to him, he would be there for me. After one particular difficulty, his word was as true as that of any great friend.”

Sheldon Katz, author of the aforementioned blackboard anecdote, earned his Ph.D. with Gunton at Temple and is now an engineer with Lockheed Martin.

“Jim exhibited an unbounded enthusiasm for even some of the most menial tasks,” Katz said at Santa Fe. “Although I left physics to work in the engineering world, I remain grateful to Jim Gunton for his guidance…and unselfish interest in my career.”

Martin Grant, professor of physics at McGill University, worked with Gunton as a postdoctoral researcher at Temple in the 1980s.

“Someone told me a trick once,” Grant said in Santa Fe. “When you have to do the right thing—even when it is not in your own interest, even when it might cost you something in some way, even when influential people are leaning on you to do the wrong thing—think of someone you admire, and do what you think that person would do.

“Usually I think of Jim.”

As dean, Gunton established several new programs in the College of Arts and Sciences—the Eckardt Scholars Program, which allows selected students to design their own interdisciplinary course of study, and the First-Year Seminar program, which allows students to explore topics of current interest. Gunton also actively supported the university’s plans to build the Zoellner Arts Center.

Colleagues say Gunton is consistently respectful of other people and shows a willingness to listen and even change his mind.

“Jim was great to work with as dean,” says Judy Lasker, the N.E.H. Distinguished Professor of Sociology in the department of sociology and anthropology, who served as associate dean of the College of Arts and Sciences during part of Gunton’s tenure as dean.

“He was very collaborative, he made sure everyone’s voice was heard, and he worked really hard to resolve some difficult problems he had inherited. He fixed things; he helped the departments find solutions to these problems.

Michael Raposa, professor of religion studies and the E.W. Fairchild Professor of American Studies, said Gunton arrived at Lehigh as the university, under the leadership of former President Peter Likins, was rapidly changing.

“Under Peter Likins, Lehigh was no longer going to be a regional university but a national, research-oriented university dedicated to research and pedagogy,” says Raposa. “As dean, Jim worked very effectively with Likins and the other college deans to establish the College of Arts and Sciences as a center of scholarship and a center for the liberal arts.

“Jim fit this vision perfectly. He embodied and enacted it. As a scientist who really cared about the liberal arts, he transformed our college.”

Since his return to Lehigh, says Raposa, Gunton has served on numerous tribunals adjudicating personnel matters and faculty disputes.

“Jim is always being asked to act as an impartial judge,” says Raposa, “because he’s beyond reproach when it comes to having integrity and being fair-minded. He has been a great citizen of Lehigh.”

Since 1968, Gunton has authored several hundred papers in scholarly journals. He is coauthor of the book Protein Condensation: Kinetic Pathways to Crystallization and Disease. He has collaborated with researchers in the United States, Spain, Japan, Germany, Switzerland, France, Finland and other countries.

“Jim has used computer simulation to study protein aggregation to explain the causes of protein-related diseases,” says Ou-Yang, who has helped organize the Sept. 21 symposium. “Modeling proteins is very complex. There are so many different shapes and sizes. Jim uses computer simulation to study biologically relevant proteins. This is what he has been passionate about.”

Dimitrios Vavylonis, professor of physics and another organizer of the upcoming symposium, said Gunton “has set high standards for scholarship and collegiality in the physics department. He is always contributing with his knowledge and opinions, and he is also very helpful.”

The third organizer of the symposium, Jeffrey Rickman, thanked Gunton for taking the time to mentor him when he was an assistant professor.

“When I started at Lehigh I was a green 30-something, and you gave me invaluable advice on matters personal and professional,” said Rickman, who is now a professor of physics and also of materials science and engineering. “You have always been so generous with your time, and I have really enjoyed all of our very wide-ranging discussions of nearly every topic under the sun.”

The Sept. 21 symposium will begin with remarks by Gunton. At 3:45 p.m., Benjamin Widom, the Goldwin Smith Professor of Chemistry at Cornell University, will give an address titled “Critical Points, Tricritical Points, and the Vanishing Interfacial Tensions.” 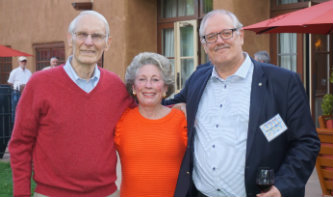 Jim Gunton (left) will be honored at a symposium in the department of physics on Sept. 21. Here he is shown with his wife, Peggy, and with Kimmo Kaski (right), professor of computational science at the Aalto University School of Science in Finland. (Photo courtesy of Gunton-Fest organizers)