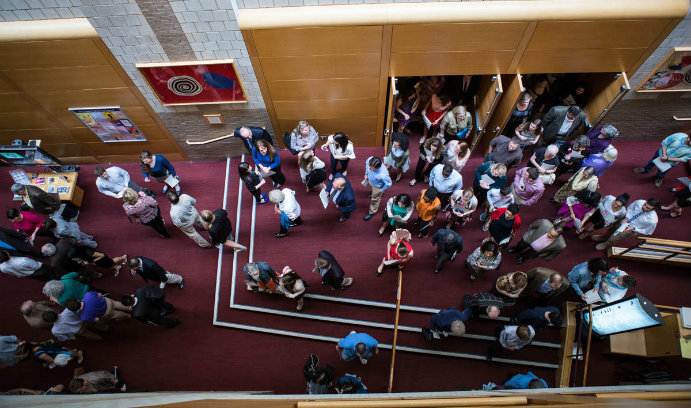 The juniors and seniors honored at the 36th annual Lehigh convocation had earned a cumulative grade point average of 3.6 or higher. Many also were selected for major academic awards or honor societies.

Lehigh’s top administrators joined with more than 500 students and their families to honor academic achievement. The mid-April event, which is held each year in Baker Hall, featured one extraordinary young scholar from each of Lehigh’s three undergraduate colleges. The juniors and seniors at the 36th annual convocation had earned a cumulative grade point average of 3.6 or higher, and many also were selected for major academic awards or honor societies.

Following an invocation by University Chaplain Lloyd Steffen, the attendees were welcomed by Interim President Kevin L. Clayton ’84, ‘13P, who noted that despite three decades of significant involvement with Lehigh, this was the first honors convocation he attended.

“It’s not that I didn’t want to attend – I just never got invited,” he said to laughter from the audience.

In his role as interim president this past year, Clayton said the best part of his experience has been the palpable sense of excellence of the students and faculty  – “You get to be with the best and the brightest” – and said he was struck by the high level of accomplishment of the students both in and outside the classroom.

“I’ve worked in the private sector for over 30 years,” Clayton said. “I worked with a lot of committed, highly intelligent, hardworking and successful people. They were all very impressive. From my perspective, in terms of concentration of great minds and great people, there is no better place than Lehigh. Not another college. Not a company. Not one place.”

To the juniors honored, Clayton encouraged them to continue to maximize their Lehigh experience. To the graduating seniors, he said: “You are not only smart; you have the intangibles needed for success and happiness. You have heart, guts and soul. You are ready to compete. You are ready to excel. You are Lehigh-ready.”

Lehigh Provost Patrick V. Farrell noted the generosity of many benefactors, whose stalwart support of scholarship helps make the event possible.  He also noted the unique characteristics of the exceptionally high-achieving Lehigh students. “They challenge themselves, their peers and their professors on a daily basis,” he said. “These young men and women didn’t come to Lehigh to blend in; they came to Lehigh to stand out.”

The pursuit of happiness

Each of the students selected to speak were introduced by the dean of their undergraduate college, beginning with Donald Hall, the Herbert J. and Ann L. Seigel  Dean of the College of Arts and Sciences, who introduced scholar, athlete and musician Kaitlyn Ruffing ’15.

In his introduction, Hall underscored the value of a liberal arts education at Lehigh, which “taught you to anticipate and lead change, to view challenges as opportunities, to turn knowledge into action, and to make a difference in the world.”

Drawing inspiration from a quote from Eleanor Roosevelt, who said that happiness is not a goal in itself, but a by-product, Ruffing said that Lehigh “has shown me that I don’t have to sacrifice anything to pursue everything that I love to do, and that makes me happy on a daily basis.”

Ruffing said she chose Lehigh specifically for the flexibility to pursue “all of my passions: swimming, track, pre-medicine and music, and that’s exactly what I received here. I’ve found that my coaches, professors and family greatly support all my endeavors and I never stand alone.”

The skills to compete with the best

Brockman reflected on his six-year Lehigh experience, and on his growing appreciation of the university, its accomplished faculty, bright and motivated students and passionately loyal alumni.

After teaching for 20 years at universities across the globe, Brockman said, “I can honestly say that you are by far the best students I have interacted with. You have the technical skills and people skills to compete with students from the top universities in the world.”

Bates shared her growth from a first-year, struggling athlete who remained focused on personal success and on continuing to challenge herself. Upon completion of her first undergraduate degree, Bates will stay on at Lehigh as a Presidential Scholar and earn a second Bachelor of Arts degree in earth and environmental science. She will also row for the crew team in a departure from her previous athletic endeavors.

Her advice to fellow students: “Stay humbled, stay grounded, and remember those who have gotten you to where you are.”

Dan Lopresti, interim dean of the P.C. Rossin College of Engineering and Applied Science, reviewed stellar accomplishments of Lehigh alums, students and faculty to illustrate that Lehigh “is not a place that produces ‘pocket protector’ engineers…..not that there’s anything wrong with that.”

It is a place “where leaders are cultivated through hands-on learning and the integration of thinking styles, and through plain and simple hard work, day in and day out.”

Lopresti introduced Anne Theurkauf ‘15, a dual-degree student in the five-year Arts-Engineering program, who is already performing research of national importance involving the investigation of the stability of a cold atomic clock.

After thanking her parents for their support, Theurkauf told of being inspired to pursue physics and engineering after watching Apollo 13. Confident that her early inclinations led to the right academic choices, she decided to wander out of her comfort zone this past academic year with classes in art and English.

“While the diversity of what I have studied this semester may not help me in my ability to solve differential equations, it has helped me in other aspects of life,” she said. “It’s all about appreciating new perspectives.”

David A. Begelman Endowed Prize in the Department of Management
Emily R. Drabik-Stevens 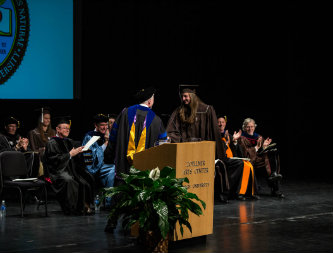 Representing the College of Business and Economics, Natalie Bates ’15 will stay on at Lehigh as a Presidential Scholar. She advised fellow students to 'stay humbled, stay grounded, and remember those who have gotten you to where you are.' 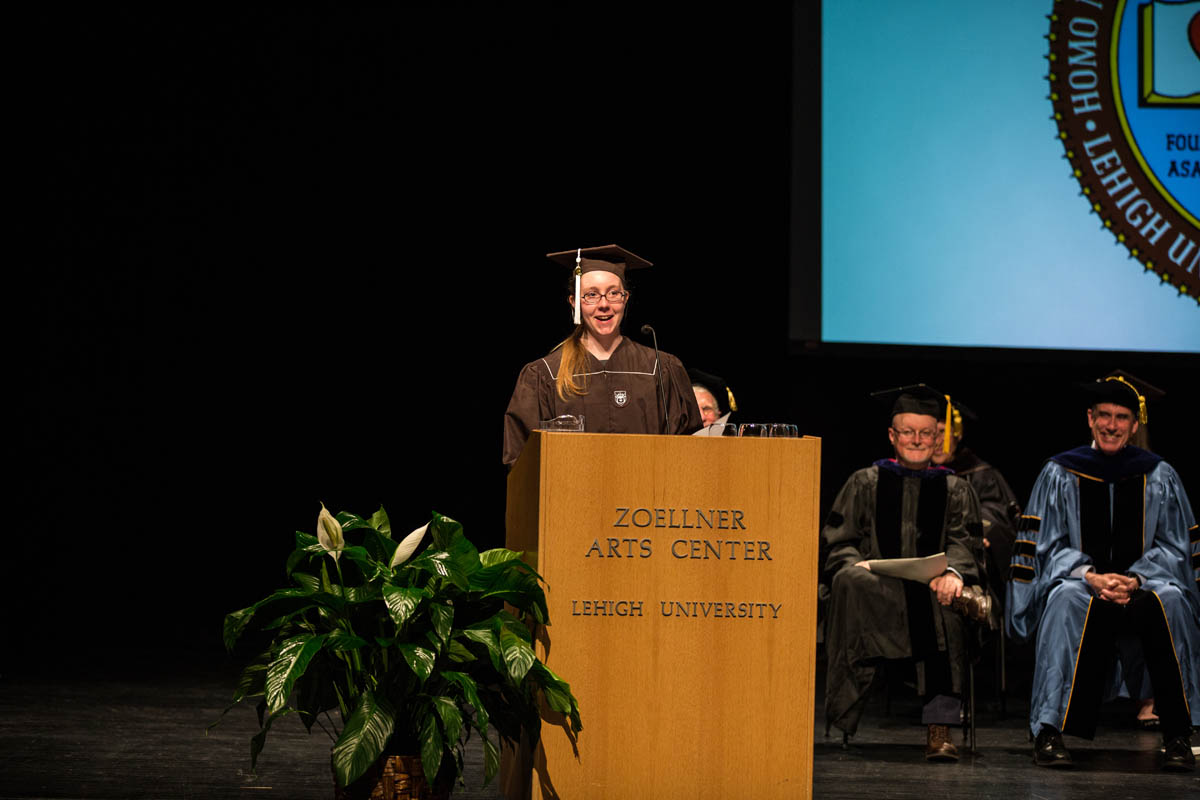 Representing the P.C. Rossin College of Engineering and Applied Science, Anne Theurkauf ‘15 told of being inspired to pursue physics and engineering after watching movie Apollo 13. 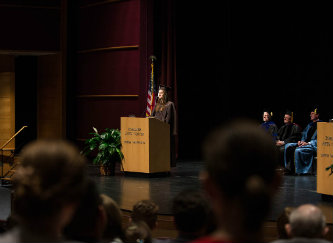 Representing the College of Arts and Sciences, Kaitlyn Ruffing ’15 said she chose Lehigh specifically for the flexibility to pursue 'all of my passions: swimming, track, pre-medicine and music, and that’s exactly what I received here.' 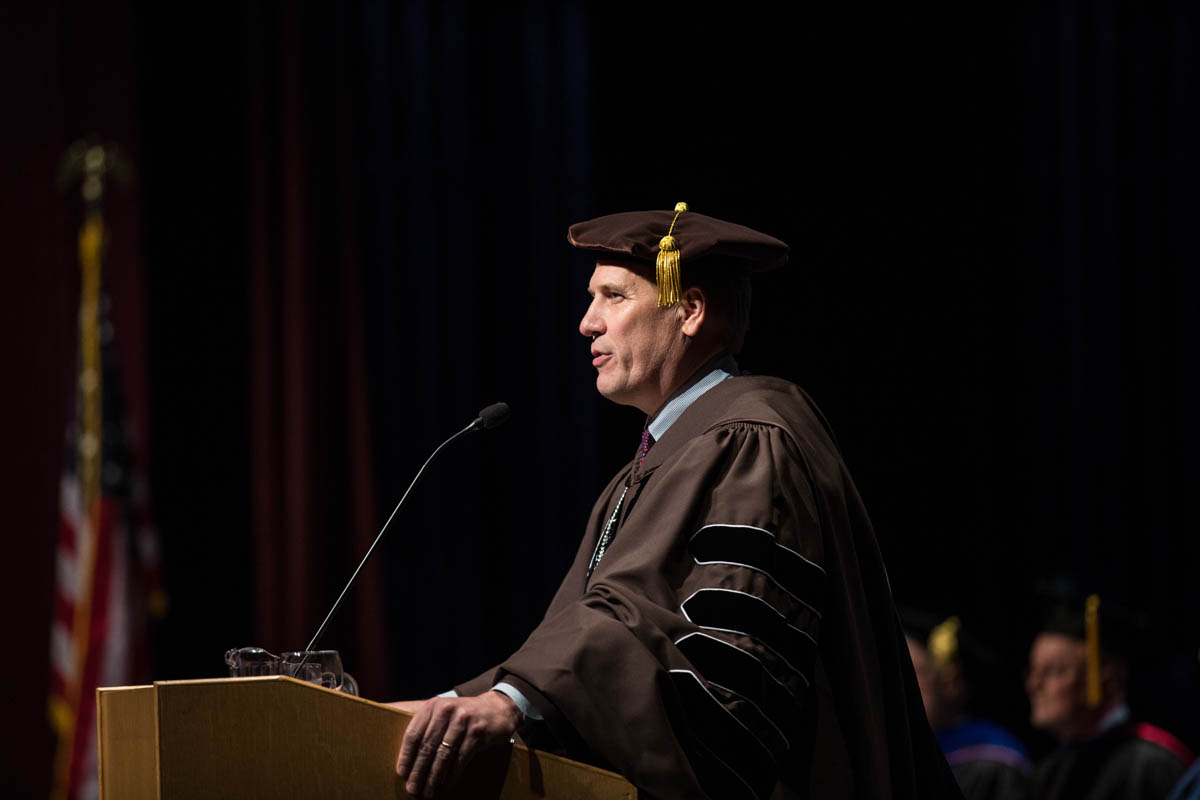 Interim President Kevin L. Clayton ’84, ‘13P said he was struck by the high level of accomplishment of the Lehigh students both in and outside the classroom.