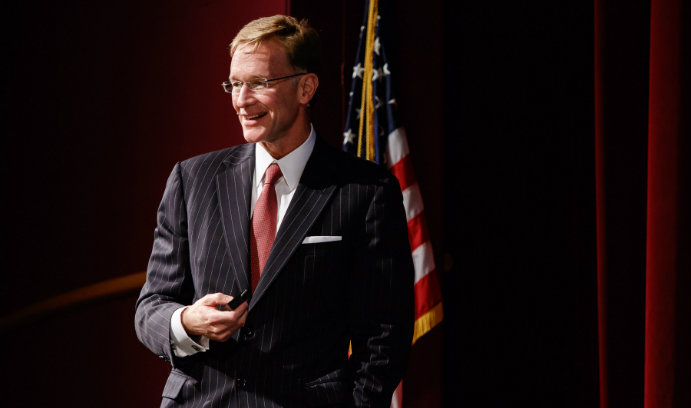 Wendell Weeks ’81 started his career at Corning for the same reason he went to Lehigh—to become a better person.

“I am a first-generation college student, so when I chose Lehigh, I knew I wanted to surround myself with people whose values were superior to the ones I had, so in turn, I would do better,” Weeks told a packed audience in Baker Hall at the Donald M. Gruhn ’49 Distinguished Finance Speaker Series on Oct. 11, 2017.

Weeks became Corning’s chief executive officer in 2005, and in 2007, he became chairman of the board. Under his leadership, the company has launched several new products and businesses, changing with the times while continuing to be world class. During his presentation marking the 10th anniversary of the Gruhn series, Weeks shared some of his most treasured insights with Lehigh students, professors, and community members, highlighting the importance of innovation, collaboration, passion, strong values, and trust.

“If you’re going to sustain as an institution, you have to focus on problems that matter,” he said. “For Corning, some of those things are cleaner air; safer, more effective medicines; and fast, reliable communication. A company’s value is ultimately measured by whether or not it does good in society.”

Weeks began his career with Corning in 1983 in the finance group. In his 34 years with the company, he has held a variety of financial, business development, commercial, and general management roles. After getting his undergraduate education in accounting and finance from Lehigh, Weeks earned an MBA from Harvard Business School. In addition to being CEO of Corning and president of the board, he serves on the board of directors at Merck & Co., Inc. and Amazon, Inc. He’s also on the Board of Trustees for the Corning Museum of Glass and the Corning Incorporated Foundation.

Weeks and his wife, Kim Frock ’82—who he, ironically, did not meet at Lehigh, but while they were sitting next to each other in an MBA class at Harvard—spent their day at Lehigh with university administrators, faculty, and students. Frock, who studied accounting at Lehigh, is the founder and chief administrator for The Alternative School for Math and Science (ASMS) in Corning, New York.

During their visit to Lehigh, Weeks and Frock both had lunch with several members of the Lehigh community. Frock met with Gary Sasso, dean of the College of Education, and Brook Sawyer, assistant professor of teaching, learning, and technology. They discussed ASMS, the vision of the College of Education moving forward, and the college’s early development education initiative. Weeks met with students in the College of Business and Economics with whom he shared invaluable stories about his life as a Lehigh student, his career path, and his experiences. He also spoke about his personal and professional perspectives on the impacts of globalization and technological innovation, as well as the unique challenges students will face in the future.

At the lecture, Georgette Chapman Phillips, the Kevin L. ’84 ’13P and Lisa A. ’13P Clayton Dean of the College of Business and Economics, said, “We pride ourselves on preparing students for success, and what better preparation than the wonderful interaction we have with distinguished alumni like Wendell Weeks.”

Weeks was introduced by Nandu Nayar, the Hans J. Baer Chair in International Finance and the chair of the Perella Department of Finance, who called the value of insights by accomplished alumni “immeasurable.” Nayar noted the 200 percent return on Corning’s stock price over the last eight years under Weeks’ leadership and touted the company’s expansion from simple glass to display technologies, optical communications, environmental technologies, specialty materials, and life sciences.

“Sustaining Institutions for Long Term Performance—have you ever seen a more boring title?” Weeks jokingly asked the Baker Hall audience as he opened his talk.

He gave insights and advice that were anything but boring and were a blend of economic theory, technology, theology, math, physics, customer market access platforms, and practical, real-world advice.

“Schumpeter considered creative destruction the essential fact about capitalism, and this is true,” Weeks said. “The reason I’m sharing it with you is because the process of creative destruction is accelerating, and it will mean a great deal not only to companies and institutions, but also for all of you as individuals.”

Corning, however, has managed the creative destructive trend; it’s one of only 64 companies that has remained on the S&P 500 since the index was first published 60 years ago. Today, most S&P 500 companies have a lifespan of only about 25 years.

How has a 166-year-old glass company stayed so unbreakable?

“It hasn’t always been smooth sailing,” Weeks said, referencing some big bumps. The biggest occurred after the internet bubble burst, which sent the company’s net income plummeting in 2002, before the leadership restored profitability in 2003 and drove the company’s next growth surge.

Weeks says Corning has survived and sustained itself by following a few rules. In addition to focusing on problems that matter, Corning has a distinct set of capabilities that sets them apart. The company maintains the trust of stakeholders by living its values and fosters an environment that encourages collaboration and creativity.

“Lehigh is a university 152 years young that is undergoing its own set of changes to remain relevant, while at the same time staying quite true to its values,” he said.

The Hidden Purpose of Capitalism

Weeks sees collaboration not only as an integral part of Corning’s success, but also at the core of capitalism.

“People view capitalism too much as competition. In some ways, it is, but if you are going to create life-changing organizations, products, and services, you’re going to have to collaborate with others,” he said.

Weeks himself has continued to collaborate with colleagues in all levels of the organization on new product development, especially in his roles as CEO and chairman of the board.

“I’m constantly stunned by the ways different people think about and approach problems—I’m always learning from my peers,” he said. “I urge you to keep your heart and mind open and to not get caught up in hierarchy,” he told students.

Weeks and his colleagues have developed and launched significant new products, such as damage-resistant pharmaceutical glass packaging that helps make injectable drugs safer and Corning® Gorilla® Glass, which is featured on billions of devices worldwide, including the Samsung Galaxy and Apple iPhone. Weeks has stayed loyal to his values and true to his passions which is likely due to why the 166-year-old company he runs has remained so robust.

When asked by a student how he’s gotten to where he is, Weeks modestly chuckled and said, “luck.” He then qualified his response: “It sounds like a flippant answer, but luck is one of the ingredients. You have to work really hard; you have to do something you are passionate about; and you’ve got to do it with people you really like working with, but I have to say, luck has so much to do with it.”

In the same breath, he reminded students not to focus too much on external recognition.

“You can’t pin your happiness on your title or how much money you make—so don’t focus on that,” he said. “Find the people you love working with and something you are really excited to work on, and you will be happy. Even if it doesn’t lead to external recognition, you will be happy.” 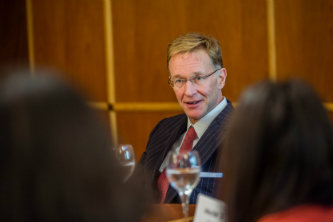 Prior to the presentation, Wendell Weeks ’81 met with students and discussed his career path, motivations and perspectives on the impacts of globalization and technological innovation, as well as the unique challenges students will face in the future.
Photo: Christa Neu

“Lehigh is truly fortunate to have benefactors (like the Gruhns) who are not only generous financially, but also deeply engaged personally — it’s an honor to have them in the audience today,” Weeks said.

A long-standing member of the university’s College of Business and Economics (CBE) Dean’s Advisory Council, Gruhn greatly supports the CBE with his talent and resources and recently provided a gift towards the new CBE building. In 2008, he established an endowment for the Gruhn Distinguished Speaker Series in Finance, formalizing his long tradition of bringing speakers to campus to address students on business topics. The Gruhns have also provided gifts for the Athletics Partnership Program, the journalism department, Linderman Library, the STEPS building, Zoellner Arts Center, and the Martindale Society.

To celebrate the occasion of Weeks being the 10th presenter, Georgette Chapman Phillips (left), the Kevin L. '84 '13P and Lisa A. Clayton '13P Dean of the College of Business and Economics, thanked the Gruhns with a plaque commemorating the decade-long tradition.

“Don and Judy Gruhn—you are truly friends of Lehigh, and we thank you,” she said.