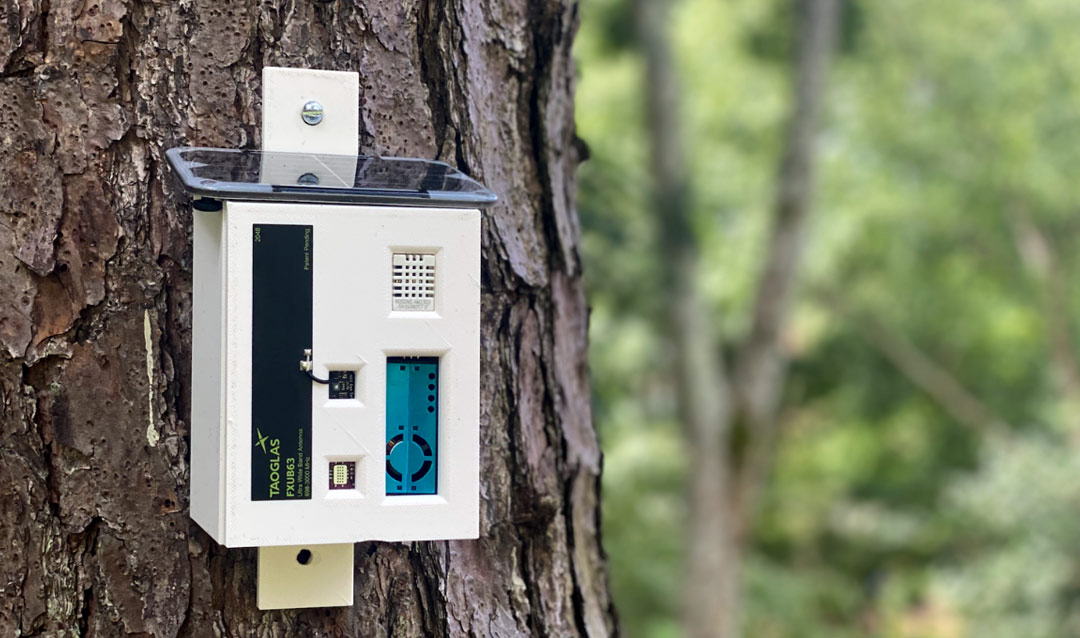 A prototype of InfernoGuard, a device that helps detect forest fires in their early stages before they spread and get more destructive.

Zoe Sherman ’25 is part of a student startup that designed an outdoor fire detection device that monitors a property for signs of fire.

From a distance, it looks like a birdhouse or trail camera hung from the trunk of a tree, but this inconspicuous device that’s smaller than an iPhone aims to prevent thousands of wildfires that ravage land across the United States every year.

InfernoGuard was created by four students, including first-year Lehigh student Zoe Sherman ’25, a computer science and business major. Now the invention is getting a lot of recognition.

Sherman won during a EUREKA! Venture Program Pitch Night at the Baker Institute last semester. Students compete on multiple stages at the monthly event. Sherman pitched from the second stage for students with prototyped ideas that they’ve begun to validate technically and financially.

Sherman and the InfernoGuard co-founders have since gone on to win the $100,000 Climate Change Grand Prize during the Arizona State University Innovation Open in February. They also took the top $20,000 prize in Johns Hopkins University’s FastForward U: Fall 2021 Fuel Demo Day, during which teams have the opportunity to pitch their venture to a curated audience. The students also are finalists in the TigerLaunch student-run entrepreneurship competition which will take place at Princeton University next month.

They began working on InfernoGuard in 2016, Sherman said, when they were freshmen in high school for eCybermission, a STEM competition that asks students to solve a community problem with an innovative solution.

At the time, the western region of North Carolina was getting charred by massive wildfires. Even though Sherman and her classmates lived three hours from the fires, the air quality in Charlotte was so bad they couldn’t go outside.

“Being stuck inside showed us how drastic the effects could be, even far away from a forest fire,” Sherman said. “We learned that many forest fires aren’t detected until they are already out of control. At that moment, we decided we were  going to do a fire detection device." 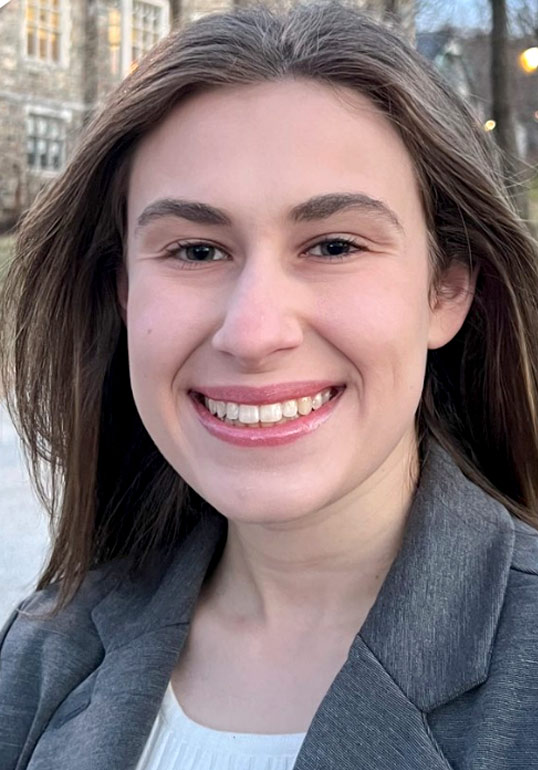 Zoe Sherman '25, one of the founders of InfernoGuard.

From 2011 to 2020, there were an average of 62,805 wildfires annually and an average of 7.5 million acres impacted annually, according to statistics from the National Interagency Coordination Center.

Although other fire detection devices are available on the market, Sherman said,  InfernoGuard is different because it’s mounted six feet above the ground, not higher like others, which means it can detect fires before they get larger and more destructive.

InfernoGuard uses a series of sensors to collect environmental data such as temperature, humidity, levels of smoke, types of gasses and particulate matter. That information is sent to a database where it’s run through an algorithm, and if a fire is detected, an alert is sent to landowners and the local fire department, Sherman explained.

When she came to Baker Institute last fall, Sherman connected with Chris Kauzmann ’13 ’14G, an adjunct professor teaching entrepreneurship and design thinking, and innovator-in-residence at Baker. Sherman was eager to take advantage of all the programs Baker offers, and Kauzmann became a mentor.

She and her co-founders had recently re-ignited InfernoGuard after a short hiatus since graduating high school. They were inspired to start it up again by the raging wildfires that engulfed Australia between 2019-2020.

“The environmental aspect of it is really important to us,” she said. “One of the goals in our mission statement is to protect land, people and their investments.”

In high school, Sherman and her team did a lot of research on their competitors in the fire detection market, but during her first meeting with Kauzmann, he pointed out there was a lot more competition than they previously thought. He suggested the team do more research and finesse their product.

“Baker helped me consider things I hadn’t previously and taught me about resources I wasn’t aware of,” Sherman said.

Kauzmann helped her hire two Lehigh data analytics interns, Sam Miller ’25 and Matthew Schneiderman ’25. Kauzmann also connected Sherman to other programs Baker offers, such as the Startup Job Fair to connect Lehigh students with local startups and “Founders’ Circle,” a monthly meeting of students who went through the EUREKA! Pitch Night process and are working on their own entrepreneurial ventures. The group shares what it’s like being a student starting a venture project and what the struggles are.

"We don't tell students if their idea is good or bad but instead push students on the rationale behind their ideas and venture decisions," Kauzmann said.

Sherman’s pitch during EUREKA! was impressive because she was able to articulate the problem she was trying to solve, why it mattered in the world and why her solution was relevant to particular users.

The team tested InfernoGuard in Yosemite National Park this past summer. Currently, Yosemite checks for wildfires using watch towers and relies on commercial planes to call it in if they see anything suspicious. Sherman plans to do further testing in California and Oregon this spring.

The co-founders found out they won the Arizona State University Innovation Open last month. The competition is designed to challenge and advance university student innovators who aim to develop hard tech ventures. The team went up against more than 30 semi-finalists in the competition, which awarded a total of $325,000.

“It still doesn’t feel real. It’s insane, honestly,” said Sherman, who found out in the middle of a Lehigh Student Senate meeting when her cellphone started blowing up with phone calls.

"Zoe is a great example of the value of showing up and executing on ideas" Kauzmann said "Executing on ideas through this process exposes students to an entrepreneurial mindset, which adds value to whatever life path they choose, and Zoe has taken full advantage of this so far in her first year at Lehigh."

Even if students don’t think they are an entrepreneur, they should take a chance, he said. They can show up to the monthly EUREKA! Venture Program Pitch Nights Baker offers, even if it’s outside of their comfort zones, and talk to Baker staff members and student entrepreneurs.

"So much about entrepreneurship is showing up,” Kauzmann said. “Show up, learn what you don’t know, find a community to help and move forward with your ideas.” 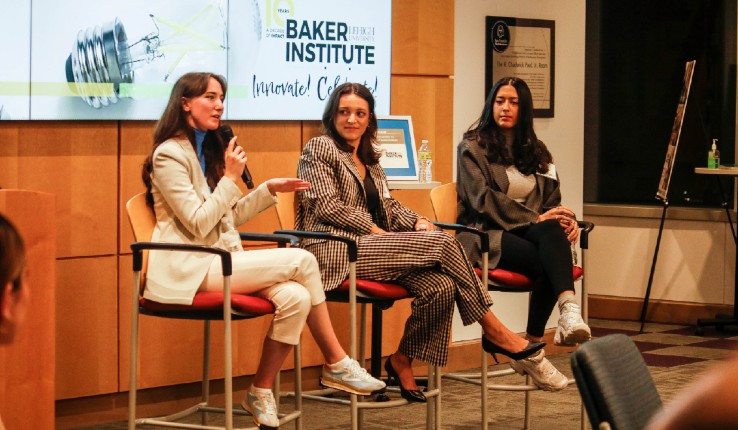 With Meraki Co. earned the event's top honor, the Joan F. & John M. Thalheimer ’55 Grand Prize, as the student venture project that progressed the furthest during the 2021-22 academic year. 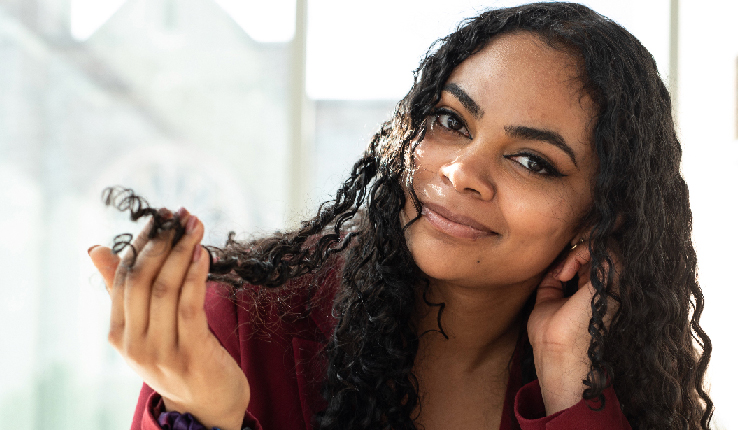 R.I.S.E. addresses the challenges of being a woman entrepreneur while also boosting entrepreneurship programs for underrepresented college students. 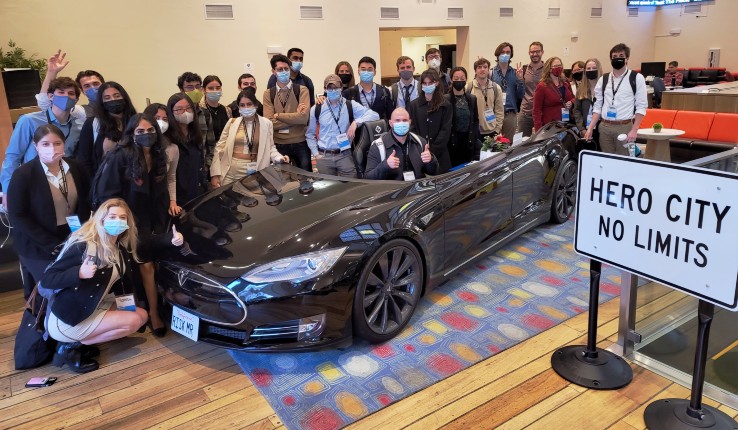 A cohort of 27 students participated in the program, which combined in-person and remote-from-home sessions.