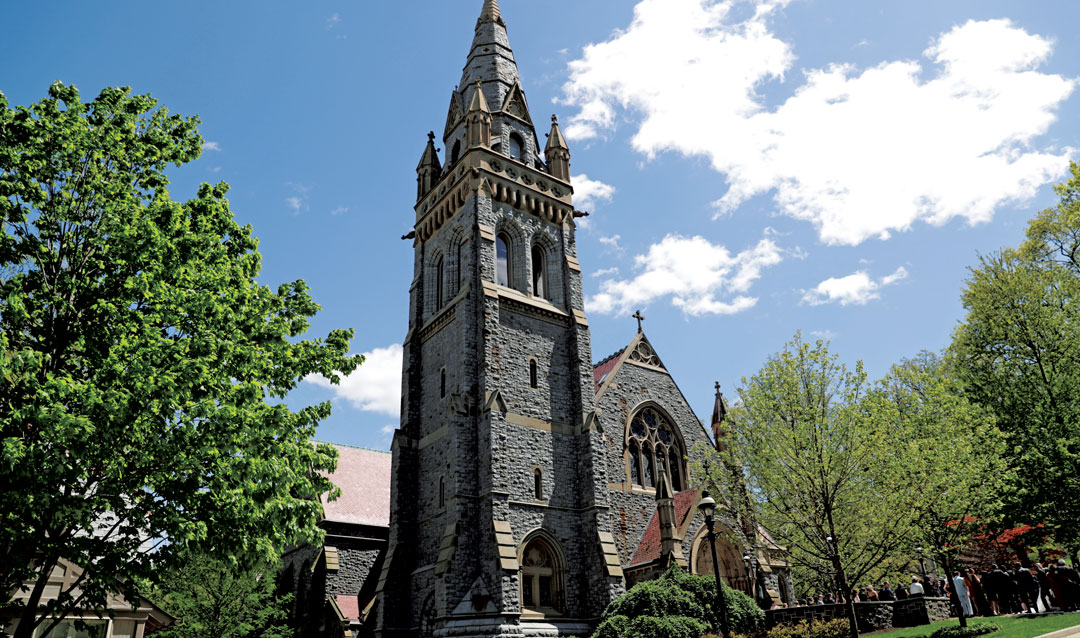 'An Old Gem': A source of beauty and tranquility, Packer Memorial Church was placed on the National Register of Historic Places in 1979. The church is widely used for weddings, weekly prayer services, campus events and musical performances.

With the reinstallation of its massive rosette window later this year, a decade-long, multi-million-dollar rehabilitation of the historic Packer Memorial Church will conclude.

The complex project started with the discovery of disintegrating stone and leaks in the Gothic-style structure, which was built by the family of Lehigh founder Asa Packer and dedicated on Oct. 30, 1887.

“The repair work that had been done on the building in the 1990s was starting to show imperfections,” said Don Pasda of Lehigh Facilities, who was tasked with assessing the condition of the church in 2007. “We were seeing water infiltration into the structure.”

Pasda saw his examination of Packer Church as a special responsibility. At the heart of campus, the church is widely used for weddings, weekly prayer services hosted by a variety of faiths, campus events and musical performances by the Bach Choir of Bethlehem. A source of beauty and tranquility, it was placed on the National Register of Historic Places in 1979.

Pasda knew he wasn’t looking at minor repairs. He needed an expert. He reached out to his national network of campus facilities professionals for recommendations.

You know that old TV show, ‘Quincy?’ It’s kind of like that. My job is to figure out what happened. There’s water coming in, how is it getting here? It’s constant sleuthing.

Enter Richard Kadlubowski of Hoffmann Architects, based in the firm’s Washington, D.C., office. Kadlubowski isn’t a typical architect. Instead of spending his days behind a drafting table or computer, his work takes him to the top of iconic structures like the U.S. Capitol dome, where he mapped each cast iron plate during a restoration project that spanned more than 25 years. Fortunately, he’s not afraid of heights—and he loves a good mystery.

“You know that old TV show, ‘Quincy?’ It’s kind of like that,” he said. “My job is to figure out what happened. There’s water coming in, how is it getting here? It’s constant sleuthing.”

After a pilot project in one of the church’s side vestibules, Facilities leadership approved a master restoration plan that included replacing sections of the slate roof,
restoring the stained-glass windows, repointing the church
exterior, rehabilitating the bell tower (closed since 2004) and replacing the stone traceries surrounding each window. At each step, the team cleaned and reinforced architectural
details. It also injected stabilizing material into walls that had lost volume due to erosion.

Stonemason Mike Montecalvo, who worked to stabilize Frank Lloyd Wright’s Fallingwater in western Pennsylvania, was the key contractor on site. He developed task flows so that plasterers, painters, electricians, roofers and masons could work in harmony. The project was performed in phases each summer, after Lehigh’s Baccalaureate ceremony each May. That meant the work took place during peak wedding season.

“Because we knew which areas of the church would be scaffolded each year, we were able to communicate with our couples in advance,” Pasda said. “We always made sure there were beautiful areas of the church available for photography, and we covered the scaffolding with attractive neutral fabric so it wouldn’t detract from their day.”

For more than 100 years, the pollution released by the Bethlehem Iron Works and Bethlehem Steel blast furnaces seeped into Packer Church’s quartzite stone block walls. There it stayed until the restoration removed the moisture from the building. Now, the residue is migrating out of the porous blocks, leaving dark traces. The team has tried unsuccessfully to clean the mineral stains from the exterior, but like the legacy of the region’s industrial history, the remnants stubbornly remain.

“We’re not taking this church back to its pristine original condition,” he said. “We are rehabilitating it to be structurally sound and bring it back to its glory at 150 years old. This is an old gem.”