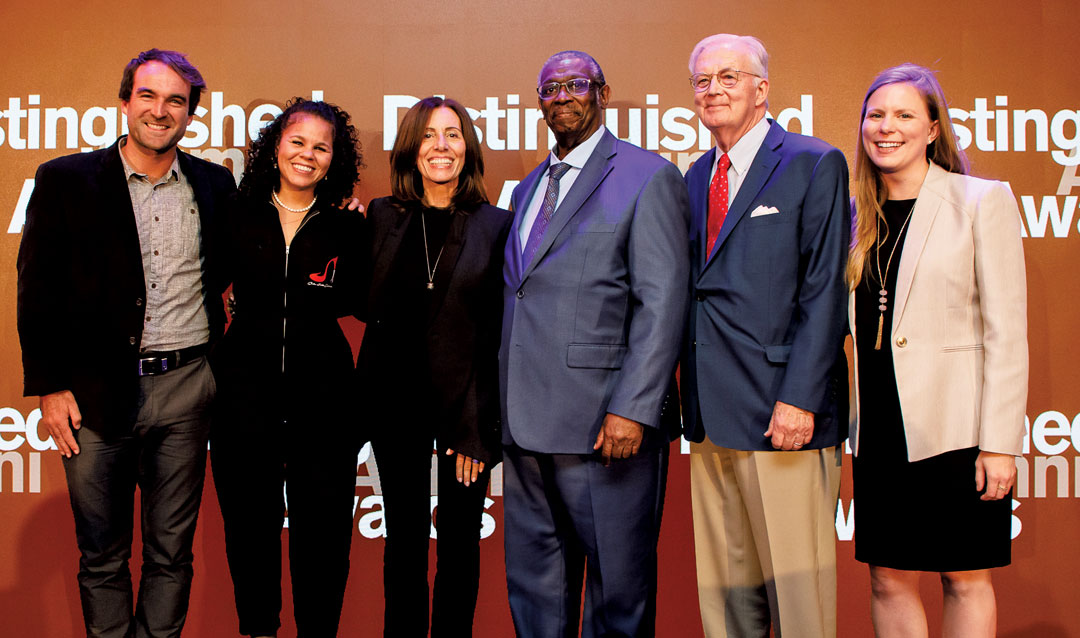 Six alumni were honored for their achievements at Lehigh's first Leadership Recognition Dinner.

Simon also inducted new members to Leadership Plaza in recognition of their donating more than $1 million to the university. Several inductees and their family members joined the ceremony held in Iacocca Hall, which fittingly took place during Founder’s Weekend. In addition to being recognized during the event, inductees’ names have been engraved on the stone benches of Leadership Plaza outside of the Alumni Memorial Building.

“Lehigh’s reputation continues to grow because of the impact our alumni are making in their workplaces, in their communities, and on campus,” said Simon. “They inspire today’s students by exemplifying what’s possible with a Lehigh degree.”

Dr. Frank Douglas ’66, a respected scientist and entrepreneur in the field of pharmaceutical research, was the recipient of the Dr. Costel Denson ’56 Award. Douglas, who received a standing ovation, said he is especially honored to receive the award because it keeps the name of Dr. Denson—the first African American to graduate from Lehigh—from being forgotten.

“I want to thank everyone for this award because you have allowed me to be a torchbearer for those pioneers who came before me,” Douglas said.

Lifetime Commitment to Lehigh Award recipient James B. Swenson ’59 ’15GP ’17GP, who has served Lehigh since his graduation, also credited those before him for inspiring him to stay close to his alma mater.

“From the very beginning, I was fortunate to have wonderful mentors to keep me actively involved with the university, to be engaged in a variety of activities, and to stay tuned in to what’s happening and what is needed at Lehigh,” Swenson said.

Founder’s Weekend, which commemorates Lehigh’s founder Asa Packer, was expanded into a full weekend of festivities that included the Volunteer Summit; Brown and White BBQ;  groundbreaking on the new Health, Science and Technology building; the Family Fest Tailgate and Family Weekend activities.

For more information about this year's awards, click here.