A Journey to the Unexplored Depths of the Pacific Ocean 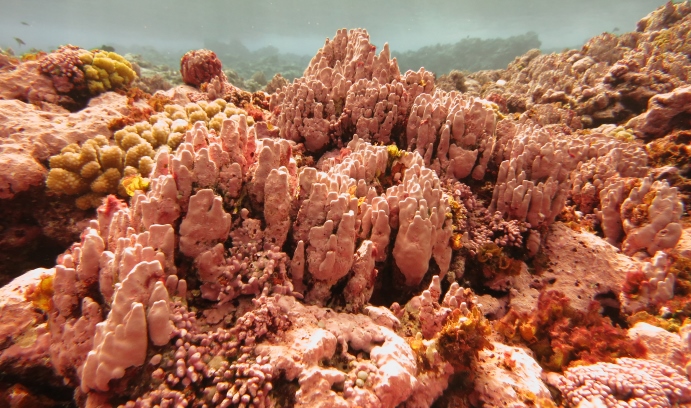 The Rose Atoll Marine National Monument, one of the world’s most pristine atolls, is home to a diverse group of marine species as well as the pink-hued bubblegum coral. (Image courtesy of Wendy Cover/NOAA)

A species of coral—called bubblegum coral for its pinkish appearance—has provided a peek into ancient migration paths for marine species as far back as 10 million years.

That discovery, and others like it, could only have happened through exploration of what is known as the deep sea—the ocean’s lowest layers, which extends from a depth of 200 meters (about 656 feet) below the surface down to the ocean’s floor. For reference, the average depth of the ocean is 3,800 meters. According to the Professional Association of Diving Instructors, most recreational scuba divers only dive as deep as 40 meters (130 feet).

Despite the importance of ocean health to humankind’s well-being, more than 95 percent of the world’s ocean has yet to be explored using advanced technologies.

“By far, the largest habitable space on our planet is the deep ocean, yet we know very little about it,” says Santiago Herrera, a visiting assistant professor in the department of biological sciences at Lehigh. “We have observed far less than 1 percent of all the seafloor. Scientists have a better knowledge of the surface of Mars or the Moon than we do of the surface of the Earth.”

Herrera is part of a team working to change that by expanding knowledge of the unknown through underwater exploration at the deepest layers of the ocean.

“Every time we dive,” he says, “we gain a better understanding of the ocean and its importance to ensure our own survival.”

This month, Herrera has joined a team aboard the Okeanos Explorer as the Biology Science Lead for the 2017 American Samoa Expedition. The Explorer, which is built and operated by the U.S. National Oceanic and Atmospheric Administration (NOAA), is the only federally funded U.S. ship assigned to systematically explore the unknown parts of the ocean.

The goal of the expedition is to collect critical baseline information of unknown and poorly known deepwater areas off American Samoa, Samoa and the Cook Islands. Two voyages are planned. The first began Feb. 16 and ends March 2; the last two dives are Monday, Feb. 27, and Tuesday, Feb. 28. The second voyage is scheduled for April 4-21.

The missions are equipped for telepresence. The remotely operated vehicle dives are being streamed live at http://oceanexplorer.noaa.gov/okeanos/media/exstream/exstream.html.

During the cruises, sea- and shore-based science teams will work to map the seafloor and make some of the first deepwater scientific observations in these areas. Dives will be conducted daily from approximately 3 p.m. to 11 p.m. Eastern Time.

During its first trip, the team will conduct 24-hour operations. This will include remotely operated vehicle dives during the day and overnight mapping operations. The vehicle dives will explore depths of 250 to 6,000 meters and include high-resolution visual surveys and the collection of samples.

“By focusing our exploration on…areas between 250 and 6,000 meters deep,” says Herrera, “we expect to find new biological communities, several new species and associations between species, as well as patterns that will help us test our biogeographic and geological hypotheses.”

The expedition is part of the three-year Campaign to Address the Pacific monument Science, Technology and Ocean Needs (CAPSTONE) , a NOAA initiative to collect deepwater baseline information to support science and management decisions in U.S. marine-protected areas in the central and western Pacific.

The areas to be explored contain some of the last relatively pristine marine ecosystems on the planet and harbor numerous protected species, undiscovered shipwrecks and cultural landscapes. Their designation is unprecedented in terms of geographic scope, ecological value and national symbolism for ocean conservation.

“From the biological perspective, American Samoa is located at a biogeographical crossroads,” says Herrera, who studies the ecological and evolutionary processes that produce biodiversity patterns in the ocean.

“It sits right at the boundary of four major deep-sea biogeographical provinces that have been hypothesized from observed differences in environmental parameters such as seawater temperature, food supply to depth and surface ocean productivity, a product of photosynthesis. The region is likely an important transition zone for the faunas from the south and north Pacific.

“Furthermore, the area north of the Samoan Islands, known as the Samoan Passage, is extremely important for the circulation of deep water in the Pacific. It’s been estimated than more than half of all the bottom water that moves from the south Pacific into the north Pacific has to funnel through this narrow gap. Thus, the deep currents that form in this area may constitute a significant barrier for many species and therefore could play a major role structuring the biodiversity that is found in the deep Pacific Ocean.”

The Rose Atoll Marine National Monument remains one of the most pristine atolls (ring-shaped coral reefs) in the world. The marine environment around the atoll supports a dynamic reef ecosystem that is home to a diverse assemblage of marine species, several of which are threatened or endangered. One of the atoll’s most striking features is the pink hue of its fringing reef, which is caused by the dominance of coralline algae, the primary reef-building species in the area. The dominance of this species makes Rose Atoll’s reef quite distinctive from the reefs found at other Samoan Islands. This reef supports the highest densities of giant clam in the Samoan archipelago and an estimated 272 species of fish. The atoll also contains nesting grounds for the endangered green sea turtle.

Expanding the reach of these expeditions is the fact that the ship is telepresence-enabled. This means that NOAA’s Okeanos Explorer will use telepresence technology to transmit data in real-time to a shore-based hub where the video is then transmitted to Exploration Command Centers located around the country as well as to any internet-enabled device. Access to the video, combined with a suite of Internet-based collaboration tools, will allow scientists on shore to join the operation and the general public to follow the expedition online—all in real time.

Scientists will access the live feed by standing watches in Exploration Command Centers, tuning in to the high-definition video via Internet-2 or watching the live video on standard Internet from their home institutions. Shore-based scientists will interact with the ship through a teleconference line and Internet collaboration tools. Using these communication tools, scientists and students can contribute expertise and help guide the at-sea operations in real time, extending the reach of ocean exploration to more scientists and students than could possibly be accommodated on board.

“We will be making discoveries that will be shared in real time with anyone with access to the Internet—increasing appreciation of and connection to our planet,” says Herrera. “In addition, this technology will enable scientists from all over the world to contribute their knowledge and help our interpretation of observations. All the images and data collected will be made publicly available as they are collected. It is a truly democratic way to do science.” 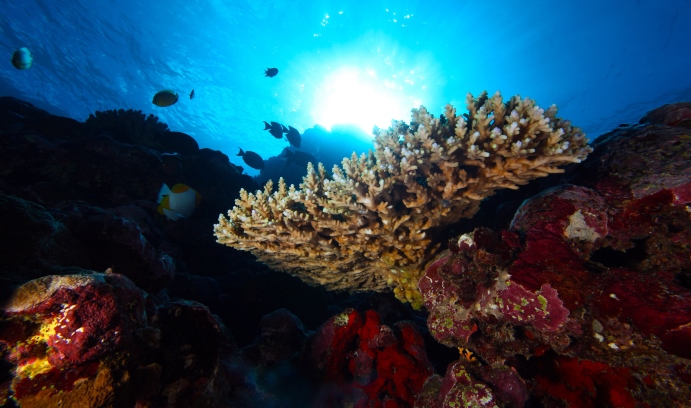 The National Marine Sanctuary of American Samoa is one of the areas that scientists aboard the Okeanos Explorer will study. It protects coral and deepwater reefs, hydrothermal vent communities and rare marine archaeological resources. (Image courtesy of Greg McFall/NOAA) 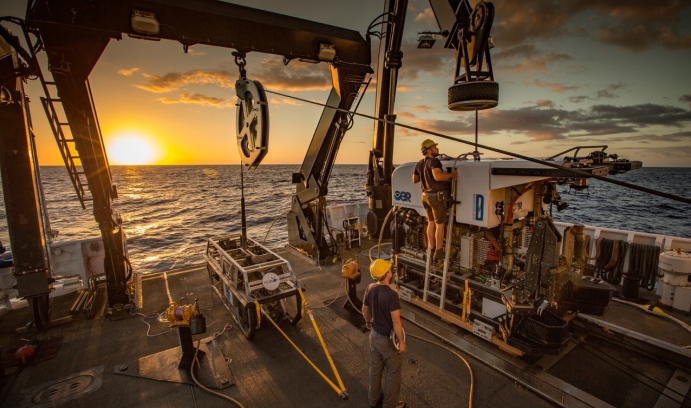 Remotely operated vehicles are prepared for deployment on the deck of the Okeanos Explorer. Powerful lighting, high-definition imaging and sensors on the vehicles collect in situ environmental data on underwater habitats. (Image courtesy of the NOAA Office of Ocean Exploration and Research)