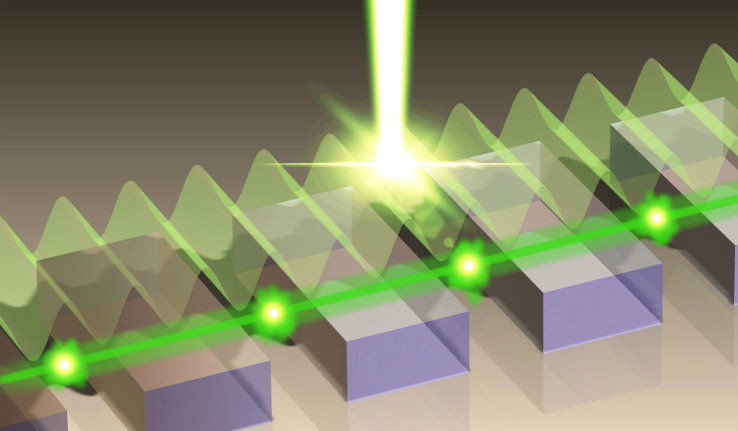 A phase-locking scheme for plasmonic lasers is developed in which traveling surface-waves longitudinally couple several metallic microcavities in a surface-emitting laser array. Multi-watt emission is demonstrated for single-mode terahertz lasers in which more photons are radiated from the laser array than those absorbed within the array as optical losses. (Yuan Jin/Lehigh University)

Terahertz lasers could soon have their moment. Emitting radiation that sits somewhere between microwaves and infrared light along the electromagnetic spectrum, terahertz lasers have been the focus of intense study due to their ability to penetrate common packaging materials such as plastics, fabrics, and cardboard and be used for identification and detection of various chemicals and biomolecular species, and even for imaging of some types of biological tissue without causing damage. Fulfilling terahertz lasers’ potential for use hinges on improving their intensity and brightness, achieved by enhancing power output and beam quality. 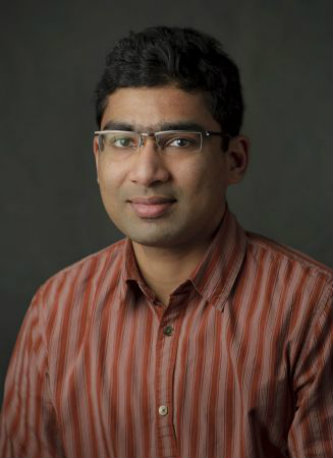 Sushil Kumar, associate professor in the Lehigh's Department of Electrical and Computer Engineering.

Sushil Kumar, associate professor in Lehigh's Department of Electrical and Computer Engineering, and his research team are working at the forefront of terahertz semiconductor 'quantum-cascade' laser (QCL) technology. In 2018, Kumar, who is also affiliated with Lehigh’s Center for Photonics and Nanoelectronics (CPN) reported on a simple yet effective technique to enhance the power output of single-mode lasers based on a new type of “distributed-feedback” mechanism. The results were published in the journal Nature Communications and received a lot of attention as a major advance in terahertz QCL technology. The work was performed by graduate students, including Yuan Jin, supervised by Kumar and in collaboration with Sandia National Laboratories.

Now, Kumar, Jin and John L. Reno of Sandia are reporting another terahertz technology breakthrough: they have developed a new phase-locking technique for plasmonic lasers and, through its use, achieved a record-high power output for terahertz lasers. Their laser produced the highest radiative efficiency for any single-wavelength semiconductor quantum cascade laser. These results are explained in a paper, “Phase-locked terahertz plasmonic laser array with 2 W output power in a single spectral mode” published today in Optica.

To enhance the optical power output and beam quality of semiconductor lasers, scientists often utilize phase-locking, an electromagnetic control system that forces an array of optical cavities to emit radiation in lock step. Terahertz QCLs, which utilize optical cavities with metal coatings (claddings) for light confinement, are a class of lasers known as plasmonic lasers that are notorious for their poor radiative properties. There are only a limited number of techniques available in prior literature, they say, that could be utilized to improve radiative efficiency and output power of such plasmonic lasers by significant margins.

“Our paper describes a new phase-locking scheme for plasmonic lasers that is distinctly different from prior research on phase-locked lasers in the vast literature on semiconductor lasers,” says Jin. “The demonstrated method makes use of traveling surface waves of electromagnetic radiation as a tool for phase-locking of plasmonic optical cavities. The efficacy of the method is demonstrated by achieving record-high output power for terahertz lasers that has been increased by an order of magnitude compared to prior work.”

Traveling surface waves that propagate along the metal layer of the cavities, but outside in the surrounding medium of the cavities rather than inside, is a unique method that has been developed in Kumar’s group in recent years and one that continues to open new avenues for further innovation. The team expects that the output power level of their lasers could lead to collaborations between laser researchers and application scientists toward development of terahertz spectroscopy and sensing platforms based on these lasers.

This innovation in QCL technology is the result of a long term research effort by Kumar’s lab at Lehigh. Kumar and Jin jointly developed the finally-implemented idea through design and experimentation over a period of approximately two years. The collaboration with Dr. Reno from the Sandia National Laboratories allowed Kumar and his team to receive semiconductor material to form the quantum cascade optical medium for these lasers.

The primary innovation in this work, according to the researchers, is in the design of the optical cavities, which is somewhat independent from the properties of the semiconductor material. The newly acquired inductively-coupled plasma (ICP) etching tool at Lehigh’s CPN played a critical role in pushing the performance boundaries of these lasers, they say.

This research represents a paradigm shift in how such single-wavelength terahertz lasers with narrow beams are developed and will be developed going forward in future, says Kumar, adding: “I think the future of terahertz lasers is looking very bright.”

The semiconductor lasers were fabricated at the nanofabrication facility of the Center for Photonics and Nanoelectronics at Lehigh University. This work was performed, in part, at the Center for Integrated Nanotechnologies, an Office of Science User Facility operated for the U.S. Department of Energy (DOE) Office of Science. This work has been supported, in part, by grants from the National Science Foundation (ECCS 1351142 and ECCS 1609168).