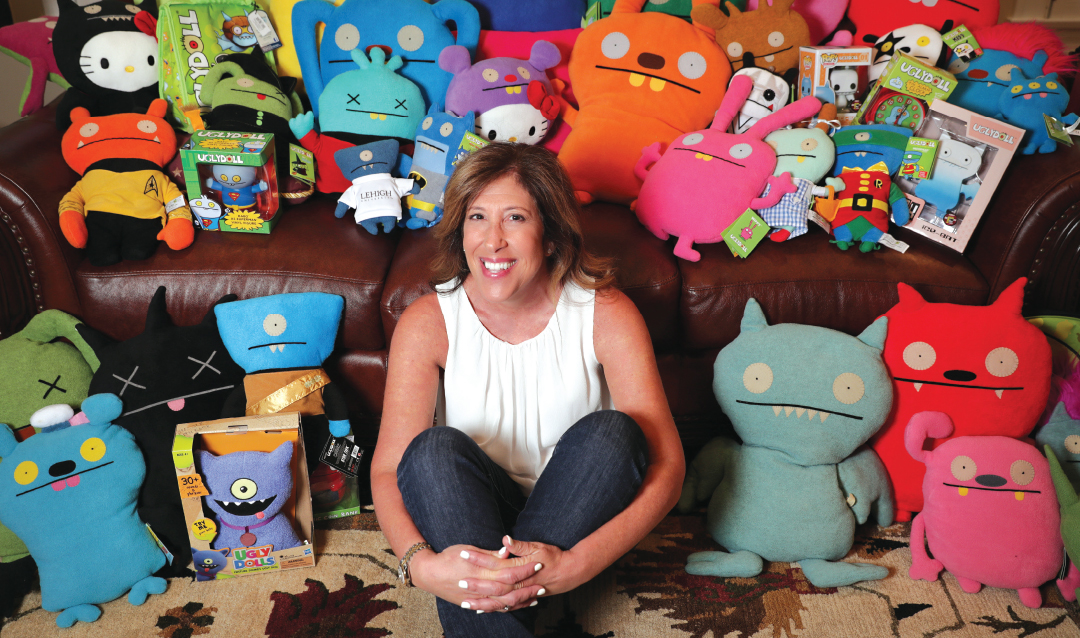 Alita Nemroff Friedman ’87 had long aspired that UglyDoll—the cuddly brand of toy she had marketed—would become an animated TV series or movie one day.

Early this year, Friedman stepped off an escalator hundreds of miles from her home in New Jersey to see tangible proof that her decade-long wish had come true.

“I was on vacation in Aruba in February, and I took an escalator to the top of a shopping center where there was a movie theater,” Friedman recalls. “And right in front of me was a big movie poster: ‘Coming Soon: UglyDolls.’ And I was stunned. I stopped dead in my tracks.”

It was a surreal moment for a woman who, as chief brand officer and a principal of Pretty Ugly, LLC, had seen the genius of UglyDoll creators David Horvath and Sun-Min Kim and believed the messages of acceptance, diversity, nonconformity and friendship behind the toys.

After the company launched in 2003, Friedman took on the sales and marketing and grew the sales force into 165 sales representatives, with 16 international distributors and close to 50 brand licenses. For the next 12 years, Friedman, who majored in accounting at Lehigh, was responsible for product development, purchasing, import/export, sales, marketing, financial management, and operations and licensing.

When Hollywood’s STX Films obtained the rights to make a film of UglyDolls, it contractually obtained merchandizing rights, and Friedman decided it was time to leave her role and consult for other brands. She maintains her equity in the classic brand, while STX has the film and TV franchise.

“They take it to the next level,” Friedman says. “Developing a brand is akin to raising your child. You nurture them and then you send them off into the world.”

The UglyDolls animated movie opened in the United States in May with characters voiced by famous names in pop music, such as Kelly Clarkson, Nick Jonas, Pitbull, Blake Shelton and Janelle Monáe. A television series for Hulu is in the works.

Friedman had only glimpses of the filmmaking process along the way and says “seeing the movie trailers months before made me extremely proud. I was completely invested in the brand.”

She took her husband Glen Friedman ’86 and their sons Stephen ’17 and Alec to the New York City premiere earlier this year and was so enamored of seeing the dolls come to life, she has watched the film again and again.

While Friedman and the other UglyDoll principals were waiting for a movie to be made, she had to come up with fresh ways to keep the brand hot. So she made a deal with Gene Simmons, front man of the band Kiss, to come out with UglyDolls made up like Kiss rockers. She collaborated with Warner Bros. and its DC Comics to make UglyDolls in Superman, Batman and Wonder Woman outfits.

“We even made Wizard of Oz UglyDolls and Hello Kitty UglyDolls,” she says. “Each collaboration brought us new fans.”

Since stepping away from the full-time marketing of UglyDolls, Friedman has had more time to share her marketing skills and brand licensing knowledge with Lehigh students.

People in the network believe in Alita. She’s remarkably talented. She’s a widely sought-after speaker on a national level as a licensing expert.

Dale F. Falcinelli, professor of practice in management at Lehigh, recognized Friedman’s talents early on and recruited her to help with the annual LehighSiliconValley immersion program, of which he was founding director. The program takes 56 students over winter breaks to meet with entrepreneurs, design experts and venture capitalists in the San Francisco Bay Area. Friedman organized the program in 2017, and Falcinelli persuaded her to create a class in Lehigh’s Flex MBA program entitled “Ventures in Brand Licensing,” which has won rave reviews from students.

Friedman tasks students with cultivating plans for new brands to license and breathe life back into those that are dormant and floundering. For example, she brought in Perry J. Smith ’87, who is working to resurrect the Minute Man hamburger chain in his home state of Arkansas. She also had her students present ideas to Ellen Stone ’87, who runs marketing at Bravo and Oxygen networks. The Lehigh MBA students had offered ideas for rolling out marketing and licensing ideas for the new TV show “Top Chef Junior.”  And Stu Seltzer ’87 joined the class to discuss licensing new consumer product platforms for his clients Scotts Lawn Care and Unilever.

“Alita has a network based on respect that she has built with high-level and low-level people coast to coast,” Falcinelli says. “People in the network believe in Alita. She’s remarkably talented. She’s a widely sought-after speaker on a national level as a licensing expert.”

Friedman has enjoyed mentoring Lehigh students who are toy designers, bringing them to the annual International Toy Fair in New York. Currently she is working with the Women in Business group on its “Technology, Innovation and Creativity” conference slated for Feb. 29. In teaching and mentoring, she has discovered a new passion for imparting her expertise to the next generation through experiential learning. She credits Falcinelli for that.

“He saw something in me that I never saw in myself,” she says, “and that has created this incredible opportunity for me. I’m grateful.”