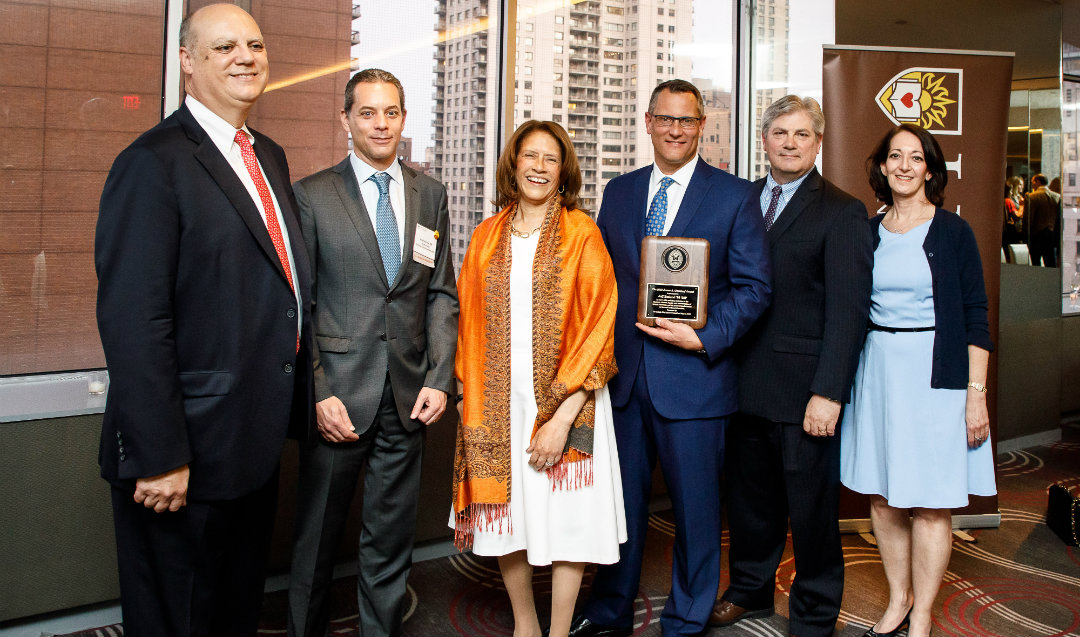 The Lehigh Journey to Wall Street

The 2019 Lehigh Wall Street Council Spring Reception was held May 8 in Manhattan.

Alex Matturri ’80 admitted to using a Quotron and Lotus 1-2-3 spreadsheet program in the late 1980s to innovatively track derivatives before analytic technology was available. A leading authority on indexing and quantitative investments, Matturri shared the ups, downs and advancements of the industry as keynote speaker at the 2019 Lehigh Wall Street Council (LWSC) Spring Reception on May 8 in Manhattan. The event also included the presentation of the fourth annual James A. Greenleaf Award to Lehigh University Board of Trustees member Jeffrey Bosland ’88 ’22P.

CEO of S&P Dow Jones Indices, Matturri spoke to more than 100 guests about the evolvement of indices to current trends and turning points in the finance world, such as stock market crashes and trading scandals, that contributed to his nearly 40-year career. 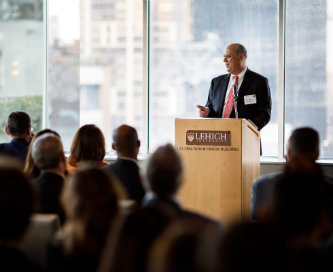 Keynote speaker Alex Matturri ’80 reflected on many changes in the industry since he left Lehigh, such as how trading used to be done in trading pits and that the person-to-person process of transmitting trades for execution resembled playing the child’s game of telephone.

“The fact that I am standing here shows that if you have a passion for what you do and also have some good luck, you can survive on Wall Street,” Matturri told the audience that ranged from young alumni to seasoned professionals and included Lehigh Business faculty and students.

Prior to Matturri’s address, Lehigh President John D. Simon ’19P was welcomed to the podium by Andrew Fife ’85, LWSC president, who presided over the event. Simon shared many positive changes that are evident on campus and the expansion of Lehigh’s international footprint, which are part of the university’s Path to Prominence plan. The plan is fueled by GO: The Campaign for Lehigh—the ambitious $1 billion-plus fundraising and engagement initiative that is strengthening Lehigh’s efforts to attract the best students, develop new facilities and programs, and support the research of Lehigh’s renowned faculty.

“I firmly believe that our actions over these next few years will secure Lehigh as a premier institution,” said Simon, as he encouraged support of the campaign.

Matturri was introduced by Georgette Chapman Phillips, Kevin L. Clayton ’84 ’13P and Lisa. A. Clayton ’13P Dean of the College of Business, who said that before joining S&P in 2007, Matturri was senior vice president and director of Global Equity Index Management at Northern Trust Global Investments (NTGI). He joined NTGI in 2003 with the company’s acquisition of Deutsche Asset Management’s Index and Quantitative Investment business. At Deutsch, he served as director and senior index investment strategist. 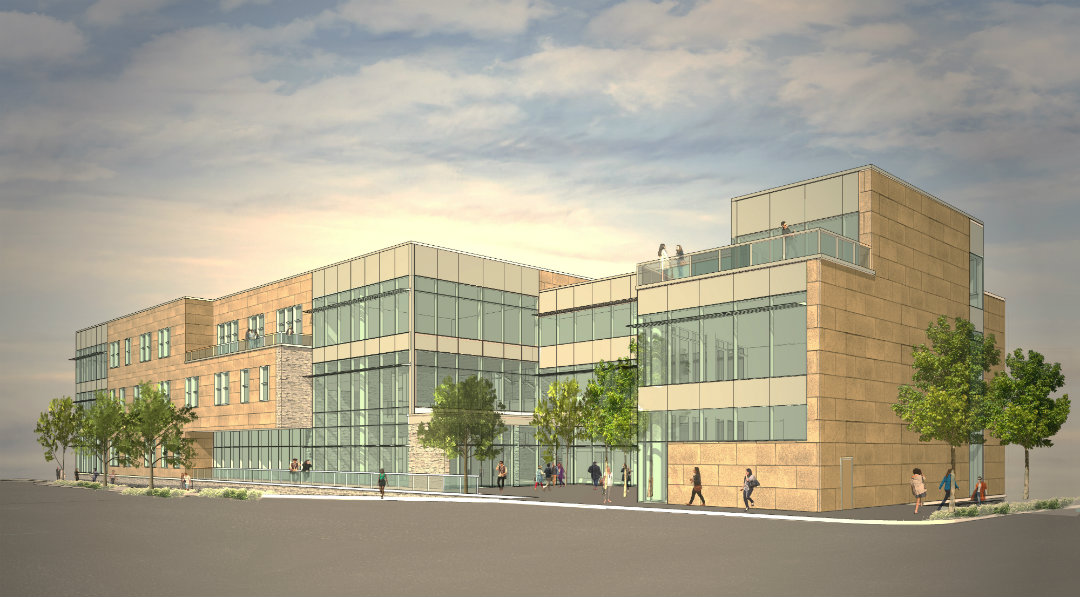 In her remarks, College of Business Dean Georgette Chapman Phillips said that these are exciting times at the college. She spoke about building a new tech-savvy business facility (shown in rendering) and having strengthened the undergraduate core curriculum in the areas of programming, data visualization and business analytics.

“We want to be known as the business school where business intersects technology,” she said.

Educated in finance at Lehigh and law at Syracuse University College of Law, Matturri is an attorney in New York and New Jersey and is a chartered financial analyst. His early career included analyzing merger arbitrage trading opportunities, trading equities and derivatives, and managing index funds, mostly at Bank of New York where he said he was given “a lot of freedom to expand the use of derivatives within its portfolios.”

“The business of being an index provider has evolved from a small cottage industry to a major component of the global capital market,” Matturri said.

Tim Daley ’12, equity research analyst, Deutsche Bank, said that he enjoyed hearing about Matturri’s career that started off in the fundamental side of finance and moved to the quantitative side of the business.

Since 2016, the LWSC has presented the James A. Greenleaf Award to a successful alum in the financial services industry who has made it a priority to uplift Lehigh. To resounding applause, Jeffrey Bosland ’88 ’22P, senior managing director, Cerberus Capital’s Operations and Advisory Company, received the fourth annual award from Michael Connor ’80 ’14P, LWSC vice president and executive director, Global Financial Markets, DriveWealth LLC. 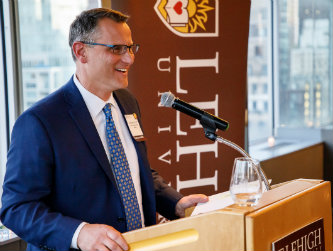 Jeffrey Bosland ’88 ’22P gave Professor James A. Greenleaf high praise for his efforts to pave the way for Lehigh students to Wall Street and asked LWSC members and guests to do the same.

“People like Jeff, who accomplish so much but never forget where they came from…these were the kind of people that were at the top of the list for Jim Greenleaf,” said Connor. “Jeff’s been serious about giving his time, talent and treasure to our alma mater.”

In his remarks, Connor praised Bosland for having a remarkable career and that his success has been driven, in a large part, by his ability to take on real challenges and leadership positions in some of the most important financial institutions in the world.

In the industry for nearly three decades, Bosland held multiple senior management positions at JPMorgan Chase, including head of US Public Finance, a number-one ranked franchise by IFR in 2011, and, most recently, as global head of Client Treasury Services. Earlier in his career in banking and fixed income sales and trading, he managed U.S. Interest Rate Swaps Derivatives Trading at Bankers Trust Company and Deutsche Bank, where he also led the U.S. Agencies Debt trading business.

Connor noted that even with all of Bosland’s professional success, the dedicated alumnus has always made Lehigh “a serious, personal priority.” Recently appointed to the Lehigh University Board of Trustees, Bosland serves on the Finance and Development and Alumni Relations Committees.

Connor quipped, “He is now a trustee at Lehigh, which means he works 15 hours a day for Cerberus and 12 for Lehigh.”

In accepting the award, Bosland shared that he was a first-generation college student, and he would not have been able to attend Lehigh without the generous scholarships that he received.

“Why do I stay so active at Lehigh? Because it gave me so much,” said Bosland who majored in finance.

He reminisced of Greenleaf’s passion and how his former professor built the Wall Street and New York Lehigh networks.

“We owe him a lot,” said Bosland who encouraged everyone to become more involved with their alma mater and mentioned opportunities such as being a panelist at the Lehigh Wall Street Council Financial Services Forum, joining Lehigh Connects or becoming a student mentor.

“There are so many different things you can do to get involved … join an advisory council, sponsor interns and hire Lehigh grads. Honestly, they won’t let you down. I have been doing it for a long, long time,” said Bosland. “From my perspective, there is nothing more rewarding than working with young people.”

In addition to Bosland’s hands-on contributions, he and Debbie have philanthropically supported Lehigh’s scholarship and financial aid program, capital projects, athletics, the College of Business, and other initiatives.

Professor James A. Greenleaf’s mission of increasing Lehigh’s presence on Wall Street is strongly championed by LWSC members who provide support and opportunities for alumni, faculty, and students alike. Greenleaf, the late professor emeritus of finance and law who passed away in July 2015, was unabashed in his efforts to make alumni connections to increase internship opportunities and promote more hiring of Lehigh graduates in the industry.

“He urged his former students to hire Lehigh undergraduates, and he made a special effort to get firms to pay more attention to Lehigh students in the financial services area,” said Connor. 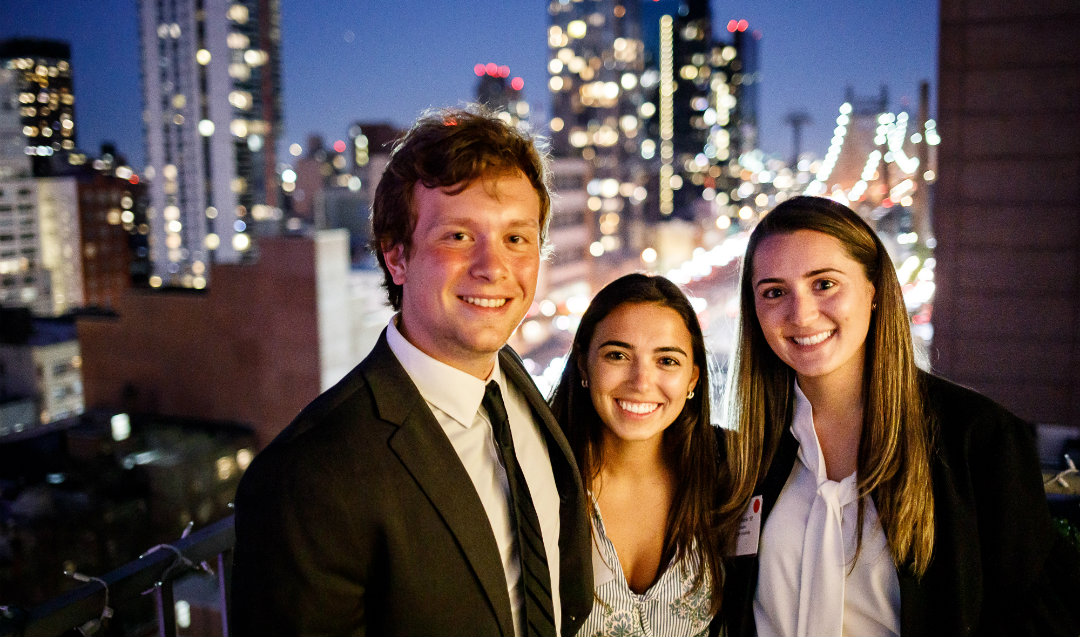 Lehigh students regularly attend Lehigh Wall Street Council events in New York and on campus to network with alumni. A few weeks prior to their graduation, seniors, from left, Paul Grocholske ’19, Alexis Maida ’19 and Alexa Morin ’19 attended the Spring Reception held at the Upper Story by Charlie Palmer.

LWSC Spring Reception attendees Alexis Maida ’19 and Alexa Morin ’19 both said they received great advice and networking help from alumni in the industry when either navigating an internship or interviewing for their first job. This summer, Maida, a 2019 finance and business information systems graduate, is beginning a position as a financial analyst at JPMorgan Chase, and Morin, a 2019 finance and economics graduate, is joining Bank of America as an equity capital markets analyst.

“The product doesn’t get any better than Lehigh,” said Connor, who received the James A. Greenleaf Award last year.

For more information on how to support the College of Business, contact Jim Mann, director of development, at (610) 788-5689 or jam508@lehigh.edu or visit GOcampaign.lehigh.edu.