Watts’ piece was among twenty-four essays chosen for inclusion in the highly-regarded annual anthology series. 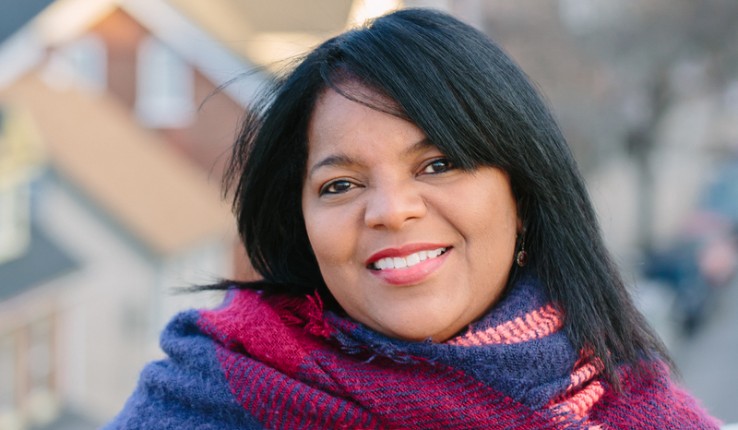 Stephanie Powell Watts' "The Unfound Door" centers around her visit to the Thomas Wolfe Memorial House in Asheville, North Carolina, a city near to where she grew up.

An essay by award-winning fiction writer, Stephanie Powell Watts, has been included in the 2020 edition of the highly-regarded annual anthology series “Best American Essays 2020.”

Watts, associate professor of English at Lehigh, said she was “totally thrilled” to learn the piece was chosen. Originally published in Oxford American, Watts’ “The Unfound Door” is among twenty-four essays chosen by guest editor, and author of the bestselling 2007 novel Call Me By Your Name, André Aciman. Aciman chose from 100 essays culled from thousands published this past year in the top U.S. magazines and literary journals.  The annual “Best American Essays” anthology began in 1986 and is part of the “Best American Series” published by Houghton Mifflin.

The essay, says Watts, was a hard one to write. It centers around her visit to the Thomas Wolfe Memorial House in Asheville, North Carolina, a city near to where Watts grew up. Asheville was Wolfe’s hometown and Watts writes: “Like many North Carolina kids, I grew up with the broad strokes of Thomas Wolfe’s story…” Yet, she had never visited the house before. Wolfe, an American novelist of the early twentieth century, wrote about a fictionalized version of Asheville he called Altamont. The memorial house is not the Wolfe’s family home but a boarding house that was owned and operated by his mother Julia. As a child, Thomas, the youngest of eight, lived at the boarding house with his mother, while the rest of the family lived in a house down the street.

Watts writes: “I know from his writings that Thomas Wolfe was unhappy here in this dirty-yellow house, with the dreaded strangers, with his life sleeping on a pallet on the floor at his mother’s feet, away from the world of his siblings. He was angry for his unconventional life―angry at his mother and his father too, but mothers bear the brunt of their children’s disappointment. Perhaps he forgot or else didn’t know yet that you can’t get from people what they don’t have to give you. Julia did what she knew how to do and that’s the best you can expect. That’s life’s immutable law.”

In her essay, Wolfe contrasts her thoughts and observations about the boarding house with memories of her own upbringing and the house in which she grew up. Writing about her childhood home, now her Dad’s house, she writes that when her parents built it, it was “a dream to them.”

“My parents divorced decades ago,” she continues. “She remarried and her home is somewhere else. An old story, I know. I have not seen her in years. That is an old story too. Motherhood does not suit everyone, and there are many reasons for this―my mother’s motives are no less complicated than Julia Wolfe’s.”

While motherhood is a theme of the essay, Watts also explores how a built environment, like a house, can be both fixed and changing, our understanding of it shaped by life experience and the passage of time. Watts notes Wolfe’s love of Asheville and writes that she knows from his writing that Wolfe “never cared about the town in the same way” after his younger brother Ben died, a subject Wolfe fictionalized in his first novel Look Homeward, Angel.

“Wolfe got back to Asheville in 1937, just months before he too died. But in that final view, that house he hated must have looked just fine with time’s fuzzy focus. Love is not static in any circumstance,” writes Watts.

While inclusion in the collection has been welcome positive news during this challenging time, Watts says she has also been inspired by her students.

“I have one of the best writing classes that I have ever had,” says Watts about the undergraduate English 144 - Introduction to Writing Fiction class she is teaching. She says that many of the fourteen students in the class “...are writing the most thought-provoking, socially exciting, structurally ambitious stories I've seen in a long time.”

“They are writing fantasy, Judaism and atheism, deaths of parents, and feminism, and about the Tulsa Massacre with such poise, maturity and emotion,” says Watts. “I am really proud of them.”

RaShawn Allen ’22, an electrical engineering major and a student in the class, credits Watts with helping him to look at his work from a different perspective.

“She enjoys the things that she does and that is made clear from her dedication and commitment to the class,” says Allen.

“Professor Watts creates comfortable and welcoming classroom environments, which allows us all to grow together and as individuals. She has taught our class how to be respectful and supportive critics of one another,” says Eve Freed ‘21, an Integrated Degree in Engineering and Arts & Sciences (IDEAS) major and student in Watts’ class. “She's not only had an impact on the writer in me, but she's helped me to discover what it means to be a great educator. As an individual who hopes to one day teach at the university level, I aspire to extend the same level of understanding and genuine care that she does to my own future students.”

As for her current writing pursuits, Watts says she is working on a story “...about various kinds of love and how we manage those loves when we are fragile, stupid, and continually disappointed.”

She is also working on a novel called Soul City that she says is “loosely based on the very real planned community in North Carolina, conceived and built by African Americans for African Americans.”

The 21st century women at the center of the novel try to resurrect the dreams of the original 1970's creators, says Watts.

“The men at the center of the real city wanted a place to grow without fear, without Jim Crow, without the double consciousness of a racialized gaze following them like shadows,” she says. “My novel asks, what do the women want? I'm exploring what it means to be a female creator in a utopia. What do you have to give up to become yourself?”