When I entered Lehigh in the fall of ’73, following the 1972 passage of Title IX, it hadn’t occurred to me that there wouldn’t be a sports program.

Lehigh got on my list of colleges to apply to because my dad was an engineer. Although, I didn’t enter as an engineer. It was more, maybe you might want to consider that. I didn’t know exactly what I wanted to do, but I was interested in psychology, specifically art therapy, so I began in the College of Arts and Sciences. After two years I realized that a career as an art therapist might prove challenging, so I switched to the College of Business and Economics for a degree in finance. It turned out to be a double major because I had taken so many psychology courses.

AS TOLD TO
Mary Ellen Alu

By far and away athletics is what shaped my experience at Lehigh. Growing up, sports had always been an integral part of my life. I played basketball, softball and field hockey in high school. When I entered Lehigh in the fall of ’73, following the 1972 passage of Title IX, it hadn’t occurred to me that there wouldn’t be a sports program. I have to admit, I was probably a little naïve. I came in with this gung-ho, I’ve-played-sports-since-I-was-in-eighth-grade attitude. But it was only two years earlier that coeds had landed on campus. By the way, that’s what we were called. Coeds, not women. There was no basketball team or softball team. I did play field hockey that fall because thankfully after a lot of complaining by women before me, they convinced Helen Bond, director of women’s athletics, to establish a varsity team.

It’s the ’70s, the culture was still full of stereotypes and discrimination. Women in any field, not to mention on campus and in athletics, are a minority; you’re entering a previously all-male institution that is scrambling to create and adapt to an environment for women. It was more focused on academia—engineering, science, business—all heavily male-dominated fields. Varsity athletics is not only an afterthought, it doesn’t exist yet for many sports. You are fighting for uniforms, locker rooms, fields, gyms—basically money. You’re fighting for a budget that hasn’t been allocated. And those were just the internal battles. What you also have to appreciate is that externally, Coach Bond and Coach Barb Lipkin are trying to build programs from scratch and create a schedule by convincing other schools that, oh yes, Lehigh has women now and we’ve got this team. 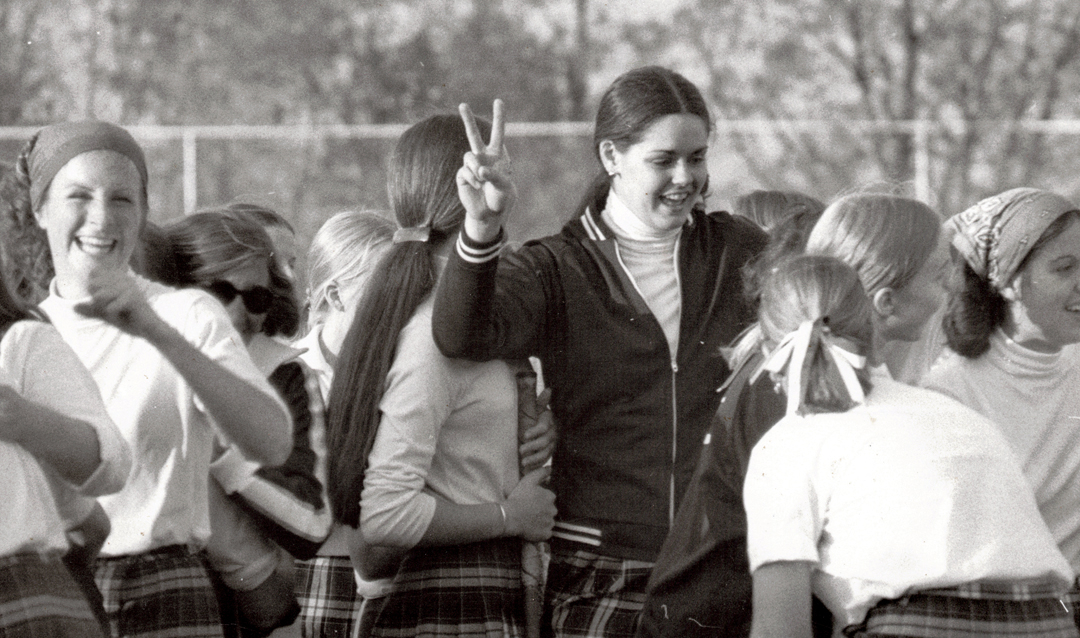 In 1974, my sophomore year, the first women’s varsity basketball team debuts. I was a co-captain, and we played seven games. Seven. Fast-forward 35 plus years later and you can’t imagine how proud I was to watch Lehigh women compete in the NCAAs. In my junior year, our field hockey team went undefeated, and we went to our first tournament. I still have vivid memories of celebrating at Smuggler’s on Fourth Street, dancing on the tables in our skirts and cleats. It’s so hard to put into perspective now, but things do start somewhere. When we had a first team, a first undefeated season, a first tournament, it was a big deal.

During the fall of my senior year, I switched from field hockey to play volleyball, and we won our first tournament. After a season of intramural softball, in the spring of ’77 the first varsity softball squad took to the field. I was a co-captain that season, another single-digits schedule. When you look back on all of our breakthroughs, like moving from Taylor Gym to play basketball in Grace Hall or getting a full uniform (softball started with a T-shirt), it’s plenty of firsts, but it was also plenty of pounding and asking for what wasn’t afforded us. I grew up and came of age in the ’60s and ’70s: the Civil Rights Act, anti-war protests, the ERA, Title IX. Struggle. I grew up around struggle. Part naiveté, part hubris, it wasn’t uncomfortable to ask for more, to raise your hand—Hey, what about us? What about me? We were fortunate that a small but receptive audience started to open doors, started to fund a path forward for women in athletics. Ironically, it’s a former male athlete contemporary of mine, Joe Sterrett ’76, who for the last 32 years as athletic director has been keeping the doors wide open and funding women’s athletics to extraordinary success.

"When you look back on all of our breakthroughs, like moving from Taylor Gym to play basketball in Grace Hall or getting a full uniform (softball started with a T-shirt), it’s plenty of firsts, but it was also plenty of pounding and asking for what wasn’t afforded us."

One of my all-time favorite sports memories at Lehigh is the basketball tournament we played my senior year. Another first. It was in Purchase, New York, at Manhattanville College, and we had to drive our cars. No bus. We drove ourselves. The reason why it leaves this indelible mark is because The New York Times reported the scores in a four-line item. We didn’t win. Yet the black and white—all one inch of it—was quite something. We had arrived.

I don’t consider myself a trailblazer. I think you always have to be aware of who came before you and the impact of their legacy. God knows there were plenty of women before me. I do like to imagine that I played a role in continuing to pave the way for the next generation and now literally pay it forward by supporting the teams that I played on. However, trailblazing feels too finite. It’s more of a continuum. A kind of “be aware of what brought you here” that leads to a “what can you add to move it forward?” It’s not so much about busting through as it is carrying on. So if I contributed to what I inherited, so be it. Fantastic.

I left Lehigh with a degree in finance and psychology and lettered in four varsity sports. Among other things, I considered those my credentials when I ventured out into the real world. I was ready to compete, confident in my abilities with a collaborative mentality gleaned from all of the team sports that I played. During my career in magazine publishing, when people would ask what prepared me, one of my go-to answers was sports. In my early career, the ability to compete throughout my formative years provided me with what I call my superpower.

I entered publishing in the late ’70s, a field where there were more women represented than probably the norm, but certainly not at the executive level. My superpower was fluency in sports. Sports trivia, sports teams, or even the most recent scores. That provided me access to slide into male-centric conversations comfortably and have my male counterparts be comfortable as well. One of the phrases I used to toss around was “my water cooler cred.” I could just fit in. When I look back, its significance is not something to underestimate. I found an entry point and an accessible way to have my abilities judged first as opposed to the first thing they saw. A woman. Yeah, that proved to be my superpower.

Susan Sachs ’77 is the board chair of Common Sense Media and formerly served as president and its founding chief operating officer. She also worked for 17 years at Time Warner Inc., in various finance, advertising and publishing roles worldwide, as well as in executive positions with publications such as Time, Fortune and Sports Illustrated for Kids. She has a master’s from Columbia Business School and received her bachelor’s degree from Lehigh, where she was Most Valuable Player in basketball in 1977. She also lettered in field hockey, volleyball, softball and played Powder Puff Football.