Soaring Together: I Believe in Choosing Your Own Path - Hetal Jani ’05

With Lehigh being strong in many areas, it became clear that Lehigh would be a great fit to explore my interests.

I’m from New York City—Queens, specifically—and went to high school in lower Manhattan. It was the subway to lower Manhattan, the concrete jungle, the skyscrapers for four years, that made me realize I needed an environment that wasn’t another city landscape. Lehigh was one option my counselor had mentioned, and, considering how beautiful the campus is, it piqued my interest. I was also unsure of my future career path, and, with Lehigh being strong in many areas, it became clear that Lehigh would be a great fit to explore my interests.

AS TOLD TO
Mary Ellen Alu

Growing up, I always heard how a career in the health sciences was a respectable and stable choice. So I started off pursuing biology as a major. However, I distinctly remember being enthralled in my first year by the choices in the course catalog, which came in paper form at the time, and wanting to take so many different classes. I had already joined a lot of clubs, like the Asian Cultural Society, of which I eventually became secretary. So, by sophomore year, I declared chemical engineering as a major, hoping to put form to my creativity. By then, I had also started a South Asian fusion dance troupe, Tarana, which made me realize how much more I wanted to explore my creative energy.

Junior year, I ended up taking courses like creative writing, art, and theater with Pam Pepper. Pam helped me do a deep dive into who I was—I still use many of the techniques Pam taught me to this day. In understanding the characters I played, and doing a character analysis for each role, I better understood people, and, senior year, switched my major to behavioral neuroscience.

I think it’s clear that I like to keep myself busy. I initially go for academic enrichment, but that’s just a piece of who I am. It was through my involvements, including performing at fusion nights as part of the Salsa team or the Bhangra team, that I realized how my identity is so intertwined with the cultures I grew up surrounded by in Queens. I started leaving a piece of me wherever I was at Lehigh, teaching people about the intersections of my identity and learning about theirs in dorm room conversations until dawn. 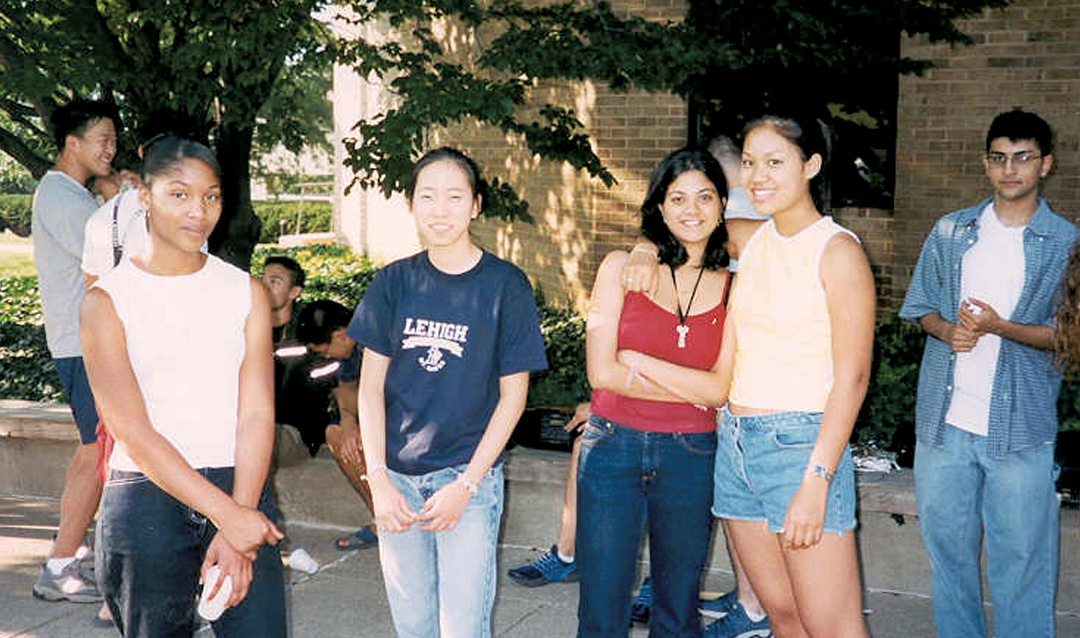 I was constantly gravitating toward activities that involved people and understanding their behavior, how interactions and communication happen, what the best communication practices are, and how the environment and context impact behavior. Pursuing behavioral neuroscience allowed me to understand social interaction and how to work within it. I liked the practical aspect of behavioral neuroscience because that’s how I learn best—applying what I’m learning at that moment.

If we can tap into the kind of learners people are, we can then make education more relevant—that’s what I learned at Lehigh. A lot of education is stuck in how the curriculum should unfold, and we lose those learners who might otherwise better realize their potential if they are allowed to pursue more of their interests when they want rather than what they’re required to learn at a given time.

At Lehigh, many professors were encouraging, but others didn’t really try to understand how I learned, and that impacted how much they motivated me, which then impacted how interested I remained in the subject matter. I learned so much about not just myself but also about the process of learning and understood the meaningfulness of representation. While pursuing chemical engineering, there were only a handful of women in my courses. While everyone was really nice, I still felt different, because there weren’t many in my group who identified as a minority and as a female. It’s hard to be what you can’t see, and none of my professors in that major were female. You gravitate toward people whom you can easily relate to or people who you think might understand you. I remember gravitating towards my fluid mechanics professor as a result because he identified as Asian and I could relate to him.

All these experiences informed what I do now as a social impact entrepreneur, which is making sure that learning and development works for everyone. We’re flipping the conversation back toward individuals and asking, What does it really mean for you to succeed? Are you seeing the visible representation you need? Are educators asking the right questions so that we can apply learning for you? How can the community support you? So often our path is dictated for us, and it’s later in life when we start to think about whether we’re fulfilled and happy. That’s why I believe in choosing your own path—exploring your interests early enough so that you can realize who you are every step of the way.

"If young people have access to people who make them feel seen, they would have someone to help them feel confident in exploring their own interests, and that would lead to a more direct and fulfilling path towards their futures."

I founded SPEAKHIRE, a nonprofit organization with a mission to build the social and cultural capital for young people, targeting young people of color, so that they can then become future workforce leaders. If you think about my Lehigh story, you’ll see how it informed this mission. I took the first two years of Lehigh to learn and adopt a new set of cultural norms, which nobody really tells you about in high school. Had I had the social and cultural capital, I would have been able to make a faster and more seamless transition from high school to college. If young people have access to people who make them feel seen, they would have someone to help them feel confident in exploring their own interests, and that would lead to a more direct and fulfilling path towards their futures.

What holds young people back from achieving fulfilling success is the time they spend trying to figure out how to fit in rather than sharpening their unique gifts. I remember the first couple of days at Lehigh, I was embarrassed to even microwave the food my mom had given me, Indian food. Even though it was 2001, it seemed Indian food was still exotic and foreign on campus. At first, I would microwave it when I knew nobody was in the Taylor common rooms and then eat it in my room when my roommate wasn't there. As I became more confident in who I was, I started taking my friends, who were mostly non-Indian, to the local Indian restaurant. I’d also excitedly share my mom’s on potluck nights.

If we start being more inclusive with cultures at our educational institutions, then everyone would have cultural capital to offer, and it would lead to more equitable social interactions.

Hetal Jani ’05 is the founder of SPEAKHIRE, a nonprofit providing career exploration and career pathways development programs for youth with a focus on youth from immigrant families, and a 2019 L’Oréal Paris Women of Worth Honoree. She received a bachelor’s degree in behavioral neuroscience from Lehigh, a master’s of education from Harvard University, a master’s of applied behavior analysis from Queens College of New York and an MBA in digital marketing from the IE Business School.

'I Can Do Hard Things'