An experimental approach reveals a Butters prophage uses a two-component system to block entry of some phages, but not others, from attacking a strain of mycobacteria related to infection-causing strains. 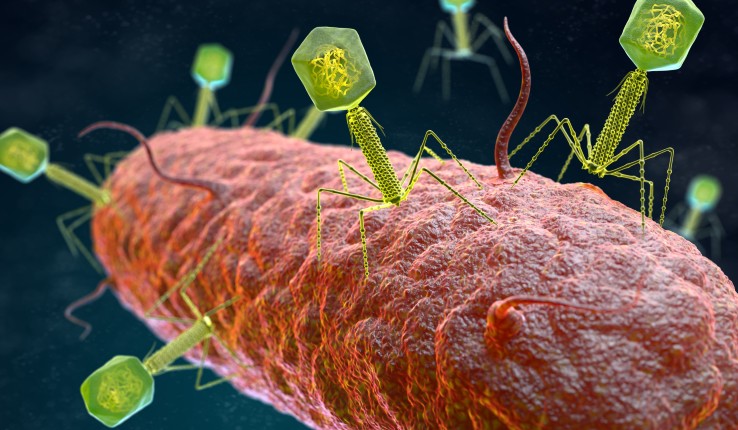 A 3D illustration of a bacteriophage virus attacking a bacterium. (iStock-iLexx)

A phage is a virus that invades a bacterial cell. While harmless to human cells, phages are potentially deadly to bacteria since many phages enter a cell in order to hijack its machinery in order to reproduce itself, thus destroying the cell.

While this is bad news for bacteria, it may be good news for humans. There is a growing need to develop new treatments that effectively attack deadly strains of bacteria that have become resistant to other medicines. Already used with success in some parts of the world, phage therapy is gaining traction as a more widespread way to fight antibiotic-resistant bacterial infections and even, at some point, some viral infections including, according to a recent article, possibly COVID-19.

Among the challenges: a virus type known as a prophage. A phage enters a bacterial cell and, instead of destroying it, takes up residence. Called a “prophage,” it fights off other viruses’ attempts to invade.  According to Vassie Ware, a professor in Lehigh's Department of Biological Sciences, many bacterial strains contain prophages. These prophages, she says, may provide defense systems that would make therapeutic uses of phages more challenging. In order to eradicate a pathogen, phages may need to overcome an already-in-residence prophage’s defense systems.

The group uncovered a two-component system of Butters prophage genes that encode proteins that “collaborate” to block entry and subsequent infection of some phages, but not others. While the Butters prophage cannot protect the bacterial cell against all phage attacks, they discovered that more than one defense system is present in the Butters prophage defense repertoire. These weapons, they discovered, are specific for different types of phages. These findings were published in an article earlier this month in mSystems, a journal of the American Society for Microbiology.

“Previous findings by several members of our research team working with other collaborators showed that prophages express genes that defend their bacterial host from infection by some specific groups of phages. For Butters, no genes involved in defense against specific phages had been previously identified,” says Ware. “With our experimental approach, we expected to identify genes involved in defense against infection by several phages, but were not expecting to uncover interactions between the two proteins that affected how one of the proteins functions in defense.”

The Ware/Buceta team used a multidisciplinary approach to identify the genes and interactions. They utilized bioinformatics tools to predict structural features of proteins encoded by genes expressed by the Butters prophage and to probe databases for the presence of Butters genes within known bacterial strains. Molecular biology techniques were used to engineer mycobacterial strains to express phage genes from the prophage.  Microbiology experiments included immunity plating efficiency assays for each engineered bacterial strain to determine if the gene in question would protect the engineered bacterial strain from infection by a particular phage type.

This strategy, says Ware, allowed identification of specific genes as part of the defense mechanism against specific viral attack.

“Collectively, these approaches provided data that allowed the team to construct a model for how the Butters prophage two-component system may function in defense against specific viral attack,” says Ware.

Adds Ware: “The diversity of defense systems that exists demonstrates that efforts to establish generic sets of phage cocktails for phage therapy to kill pathogenic bacteria will likely be more challenging.”

In addition to advancing phage therapy development, the team’s discovery may also be important for engineering phage-resistant bacteria that could be used in the food industry and in some biotechnology applications.