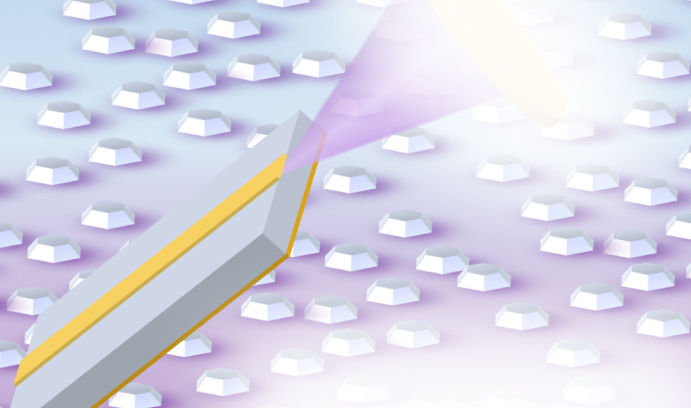 Researchers at Lehigh and at Sandia National Laboratories believe LEDs and laser diodes can be made more efficient by using quantum dots in the light-producing regions. Image: Courtesy of Jonathan Wierer.

Walk into a typical home improvement store, says Jonathan Wierer, and the progress of the LED revolution quickly becomes apparent.

In the lighting section of most of these stores, says Wierer, an associate professor in the department of electrical and computer engineering and the Center for Photonics and Nanoelectronics (CPN), bulbs made with LED (light-emitting diode) technology account for more than half of the displays.

“The progress in LED technologies has been driven by scientific advances in the materials and devices of indium gallium nitride (InGaN) and gallium nitride (GaN) semiconductors. This progress is essential for enabling practical technologies used today,” says Nelson Tansu, the Daniel E. ’39 and Patricia M. Smith Endowed Chair Professor and Director of the CPN at Lehigh.

There are obvious reasons why consumers are turning to LED-based lighting, says Wierer. LED light bulbs consume 85 percent less energy than incandescent bulbs and 25-35 percent less than compact fluorescent light (CFL) bulbs. LEDs cost more than incandescents or CFLs, but they can last for decades and in the long run save money.

And unlike their rivals, Wierer adds, LEDs can be engineered to provide a desired type of color temperature.

“With LEDs, you can engineer the spectrum of light to improve human health,” says Wierer. “We are just learning, for example, that blue light affects our biological clock—or circadian rhythm—and can disrupt our sleep cycles. In three-color white LEDs we can engineer the amount of blue light that is emitted.

“That’s another reason, in addition to efficiency, that we’re interested in LEDs.”

Despite its progress, the LED revolution is far from over, say the Lehigh professors. LEDs can be made even more energy-efficient—perhaps twice as much—with better engineering of their active, or light-producing, regions. And given that lighting accounts for approximately 20 percent of global energy consumption, there is a potential for enormous energy savings.

Wierer and Tansu, along with their colleagues, have proposed a significant change to the engineering of LEDs in a paper titled “III-nitride quantum dots for ultra-efficient solid-state lighting,” which was published recently by Laser and Photonics Reviews, one of the world’s leading optics journals.

The paper, which is based on theoretical work and computer simulations, was authored by Wierer, Tansu, Arthur J. Fischer and Jeffrey Y. Tsao. Both Fischer and Tsao are from Sandia National Laboratories in New Mexico.

In the paper, the authors argue that by using quantum dots (QDs) in place of the quantum wells (QWs) that now produce light in many LEDs and laser diodes (LDs), engineers can circumvent the phenomena that limit the efficiencies of the two technologies.

“If our theoretical work can be realized, this could lead to ultra-efficient solid state lighting sources with huge potential energy savings,” said Wierer. “This would have a big impact on lighting and energy use with a great benefit for humanity.”

Quantum dots—semiconducting particles measuring just several nanometers in size—emit light at specific frequencies when an electric current is applied to them. By changing the size, shape and material composition of the QDs, engineers can tune these frequencies.

Quantum wells confine electrons and other particles in one-dimensional, rather than three-dimensional spaces, in ultrathin layers of sandwiched materials. Carriers—electrons and electron holes—are injected into these layers at different energy states, and they recombine to produce the photons that give light.

A phenomenon called Auger recombination interferes with this process in the materials that make up modern LEDs, says Wierer, and can prevent light from being emitted, causing “efficiency droop” in LED performance. Wierer’s colleagues in the Advanced Labs of Lumileds Lighting—one of the world’s largest LED companies—first identified the Auger effect in blue LEDs nearly a decade ago. Auger recombination occurs in semiconductors when an electron and electron hole recombine and give up their energy to an electron (or hole), increasing this electron’s energy while preventing or limiting the formation of the photons that emit light.

Although not all scientists are willing to accept Auger recombination as the culprit in efficiency droop, the Lehigh and Sandia researchers claim in their recent paper that “parasitic” Auger recombination limits LED performance by causing poor efficiencies at high current densities.

“It’s a matter of efficiency versus current,” Wierer says. “You inject current into an LED and get light out. Ideally, the more current you inject, the more light you will produce. Because of Auger recombination, however, the efficiency of light output falls.”

“This is a fascinating field of study that identifies both the cause of Auger recombination and its potential solutions,” says Tansu. “The nanostructure active region is one possible solution. Another is to use new active-region material—for example, dilute-arsenide GaNAs—with a low Auger rate.”

While working several years ago at Sandia National Labs, Wierer and his colleagues explored ways to overcome Auger in LEDs. The group was the first to propose using laser diodes instead of LEDs for lighting, as the recombination physics of laser diodes promised more efficient light production at high input powers. But the researchers concluded that these input powers probably exceeded what was necessary for lighting and decided to pursue other paths.

“Once you accept that Auger is the reason for efficiency droop, then you can free your thinking and find solutions,” Wierer says.

Wierer continued his collaboration with his Sandia colleagues after joining the Lehigh faculty in the fall of 2015. Still searching for a solution to Auger, his team decided to replace quantum wells with quantum dots in an effort to overcome Auger recombination and achieve more efficient light emission in LEDs and LDs.

“We compared the recombination physics of QDs with that of QWs,” Wierer says. “We compared the light-producing layers in QDs and QWs to see which were more efficient.” When the researchers adapted their QW model to QDs, they found they could improve the efficiency of both LEDs and LDs.

The recent article in Laser and Photonics Reviews was based on a theoretical study conducted with computer numerical simulations. The Lehigh group has begun to conduct experimental studies using etching and growth techniques to fabricate quantum dots. The experiments are being carried out in Lehigh’s CPN using the metalorganic chemical vapor deposition (MOCVD) growth process. Their goal is to make smaller QDs, only 4 nm in size, of a uniform dimension and even distribution.

“QDs typically come in an assortment of random sizes,” Wierer says. “We want the dots to be the same size and to emit at the same wavelength of light. If they emit at a broad spectrum of wavelengths, that’s not as beneficial.”

If they are properly constructed, the researchers wrote in their article, “III-nitride LEDs with QD active regions have the potential to outperform QW LEDs, and enable an era of ultra-efﬁcient solid-state lighting.”

“Significant research activities on these materials and device technologies have been pursued at Lehigh for the past decade. The addition of Wierer to Lehigh’s CPN is essential for further advancing our strength in GaN-based semiconductor research activities, which are key technologies for energy efficiency, power electronics, and communication,” Tansu said. 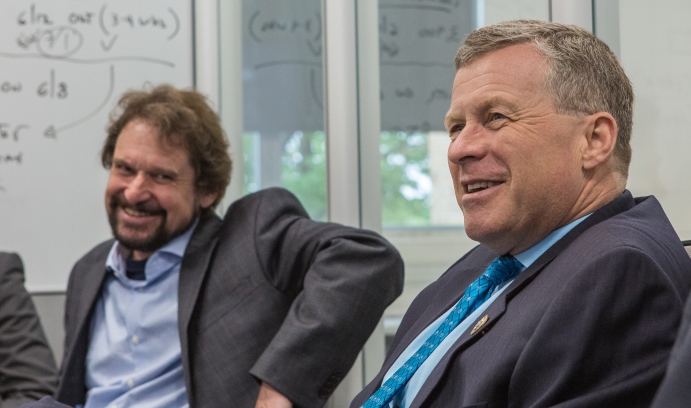 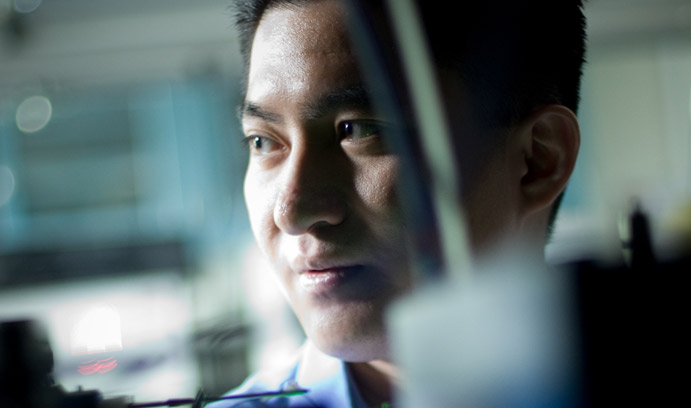 His innovations have “paved the way for vastly improved lighting emitters and lasers.”