The atmosphere is jubilant as first-year students arrive on campus and move into dorms.

With music pumping, a gaggle of Lehigh students in brightly colored t-shirts positioned themselves near the check-in tent on the Mountaintop campus Thursday morning and noisily greeted members of the Class of 2023 as they arrived, one by one, for Lehigh’s Move-In Day.

Move-In Day for Lehigh’s 157th class was a joyous occasion, as the first-year students checked into campus, where they received Lehigh t-shirts and tote bags, campus maps and other orientation materials. Then, parents in tow, they made their way to the Asa Packer campus and their assigned dorms, hauling up bedding, toiletries, clothing and snacks.

In all, more than 1,400 first-year students arrived to campus, with many of the students checking-in earlier in the week. The members of the Class of 2023 represent 42 U.S. states and territories, including Puerto Rico, and 27 countries, including Germany and New Zealand. 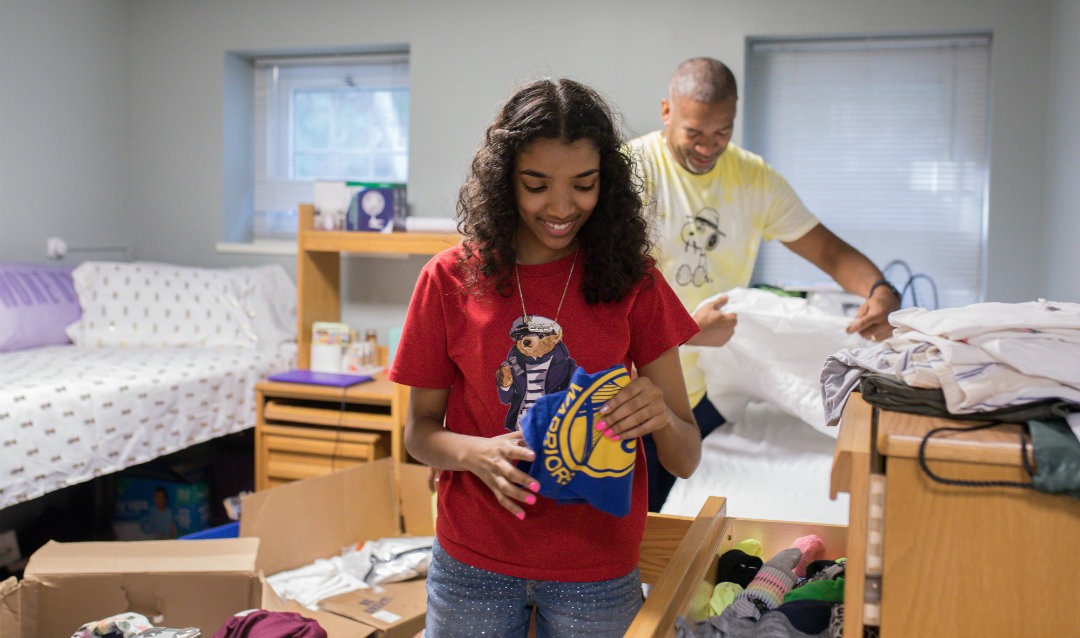 Christina Anglin '23 unpacks in her room inside the Umoja House, which is celebrating its 30th anniversary.

Volunteer Manasi Vitthanala ’22 was among those on hand outside Iacocca Hall to help greet the first-year students in much the same way that she had been greeted the previous year—with bursts of enthusiasm. “You want to get them hyped for orientation,” she said.

Vitthanala noted that the first-year students will go on to meet new friends and have new experiences but that they also will be adapting to a new environment.

“Changes are scary,” she acknowledged. “You’ve got to make it fun.”

On the main campus, Natalie Comens Ozga ’88 of Hunt Valley, Maryland, made her way up to McClintic-Marshall House, where her son Ben Ozga ’23 had settled into his dorm room three days earlier. Toting additional supplies that he had forgotten, she greeted him with a big hug outside the residence hall. She hadn’t seen him since Monday, when he arrived to participate in the PreLUsion Outdoor Adventure Program, and he was doing fine.

“That was a lot of fun,” Ben Ozga said about the pre-orientation. “It was good to meet a lot of people beforehand.”

Natalie Ozga, who had received her bachelor’s degree in economics from Lehigh, noted how much the campus and the surrounding community had changed since she attended the university, with new construction and new amenities prevalent. With another son attending nearby Muhlenberg College, where he is a junior, Ozga was adjusting to her own changes too.

“They’re growing up,” she said. “It’s exciting, but it’s emotional.” 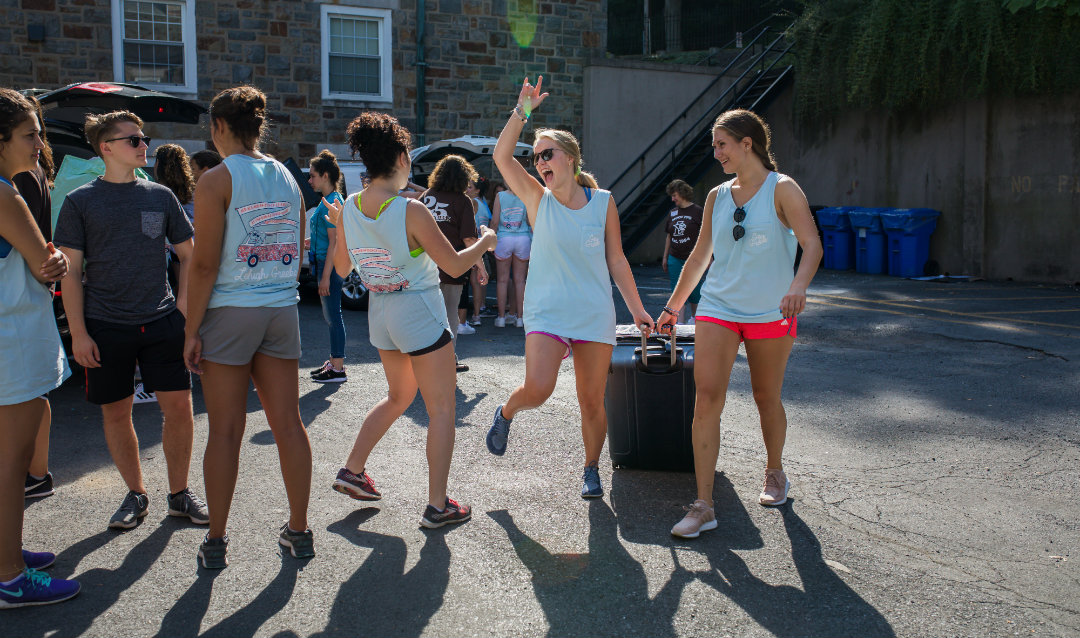 MOOV volunteers enjoy the festive atmosphere as they help the Class of 2023 move into their dorms.

President John D. Simon arrived outside McClintic-Marshall shortly after Tracie Catlett, of Louisville, Kentucky (and more recently Greensboro, North Carolina) and her husband pulled up to unload their car and help settle their son, Jack, into the dorm.

Simon, enjoying one of his favorite times on campus, greeted incoming students and the scores of MOOV (Made of Our Volunteers) representatives who were on hand assisting with move-in duties, including checking in students, directing traffic, unloading cars and delivering students’ belongings to their dorm rooms. In all, more than 1,300 staff, faculty and students volunteered.

In a bit of serendipity, the Catlett family had planted a Lehigh flag on their front lawn during their son’s high school graduation party to note his university choice. Their neighbor approached to let them know that her son—Simon—was president of Lehigh and that they ought to say hello to him when they got here. They did that—and posed for photos together with him too.

“I’m excited,” said Jack, after hauling boxes into his dorm. “I’m ready to move in.”

Catlett said her son, who planned to major in product design, had liked Lehigh from the start of his college search journey. She said the interdisciplinary approach to study had appealed to him.

Outside of Drinker House, about 20 members of the fraternity Phi Kappa Theta, along with other MOOV representatives greeted students and their families with chants of “Pop that trunk!” and “Welcome to Lehigh!”

Along University Drive, MOOV representatives swarmed each car that parked in front of a dorm building. In addition to chants, and speakers providing tunes as first-year students acquired their room keys, some MOOV volunteers blared music on their cell phones as they moved items from cars to rooms, creating a festive atmosphere both inside and out.

Julie Fisher, from the Great Neck region of Long Island, New York, was impressed with the check-in procedures as she dropped off her daughter Dani Fisher ’23, her first child to attend college, outside the Centennial 1 Complex.

“Everything has been amazing, so easy, so quick and very efficient,” Julie Fisher said. “I thought mobs of people, and we thought lines. I think that's all we thought. And so far, none of that has happened.”

It wasn’t just the reception outside her daughter’s new home that Fisher enjoyed, it was the entire check-in process.

“She got a welcoming committee, too, when she walked up to Iacocca Hall [for check-in],” Fisher said. “They're all like yelling and screaming and chanting her name. It's really been so warm and upbeat.” 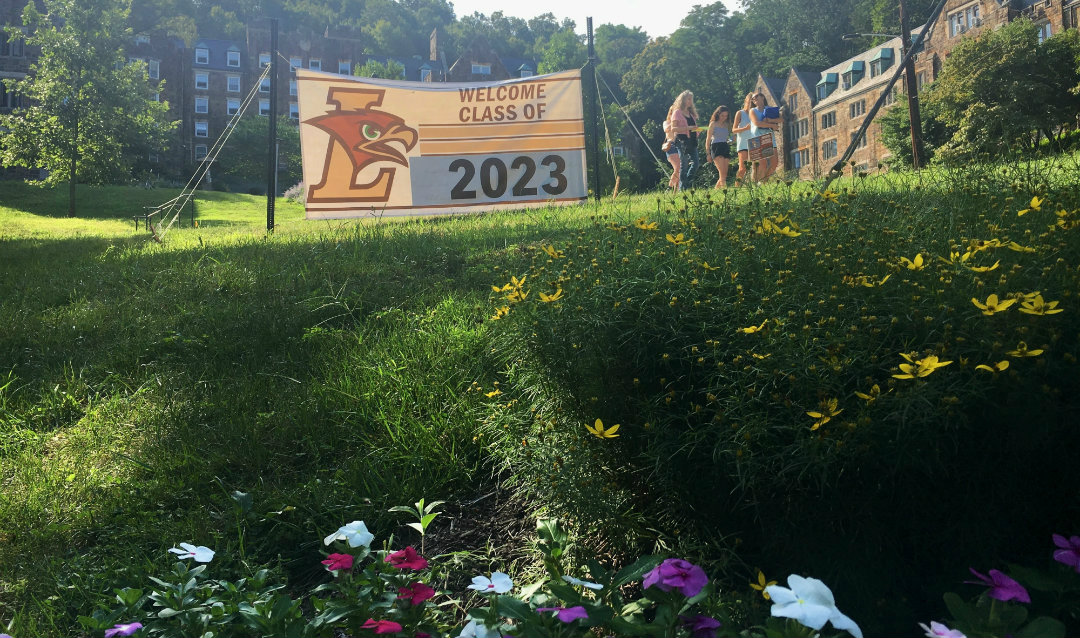 Lehigh welcomes the Class of 2023 on Move-In Day on Thursday.

Eric Bost, from Bronx, New York, was just as pleased with the MOOV volunteers after they quickly moved his son, Jalen Cotton ’23, into the Emery House.

“[It’s] been awesome,” Bost said. “When I moved in [at college], we didn’t have this type of stuff. It's cool. I think it creates a good atmosphere. It's very helpful and they're working hard.”

Cotton, standing in the hallway outside his dorm room, admitted he was both excited and nervous about starting at Lehigh, which his father said was attractive to him because of its engineering program. He was coming to the realization that he would be officially on his own for the first time and wouldn’t have his parents or grandparents around if he needed anything. But the greeting he received from MOOV volunteers was comforting.

“As I was bringing this stuff in, a lot of kids came over and asked, ‘How can we help you? Can we help you?’ They helped me bring some of this stuff upstairs,” Cotton said. “Seeing that they're willing to help, it makes me feel welcomed at this school. It lets me know that a lot of kids here are down to earth. They seem like they're easy to come up to, if you have anything you need to talk about, [if you have] any problems.”

Later, a welcome lunch was held on the UC front lawn for parents and students. Parents then headed to Baker Hall at the Zoellner Arts Center for a family orientation kick-off, where they were greeted by Ric Hall, vice provost for student affairs. Hall noted that Lehigh students and staff, including Lehigh Chief of Police Jason D. Schiffer and Provost Patrick Farrell, had been among the many volunteers who helped students move into their residential halls.

“That spirit is what Lehigh University is about,” Hall said. “This is a community, and your student is going to hear that word “community” over and over and over again over the next four years. This is intended to be their home away from home. Of course, you’re always going to be their family but we are their second family, their Lehigh family.”

Farrell told the parents who had gathered in Baker Hall that Lehigh has high expectations for their children, given that they had demonstrated high academic achievement in being accepted to the university. He said Lehigh anticipates that they will work hard at their academics and outside activities, with some experiences being easy and others difficult. 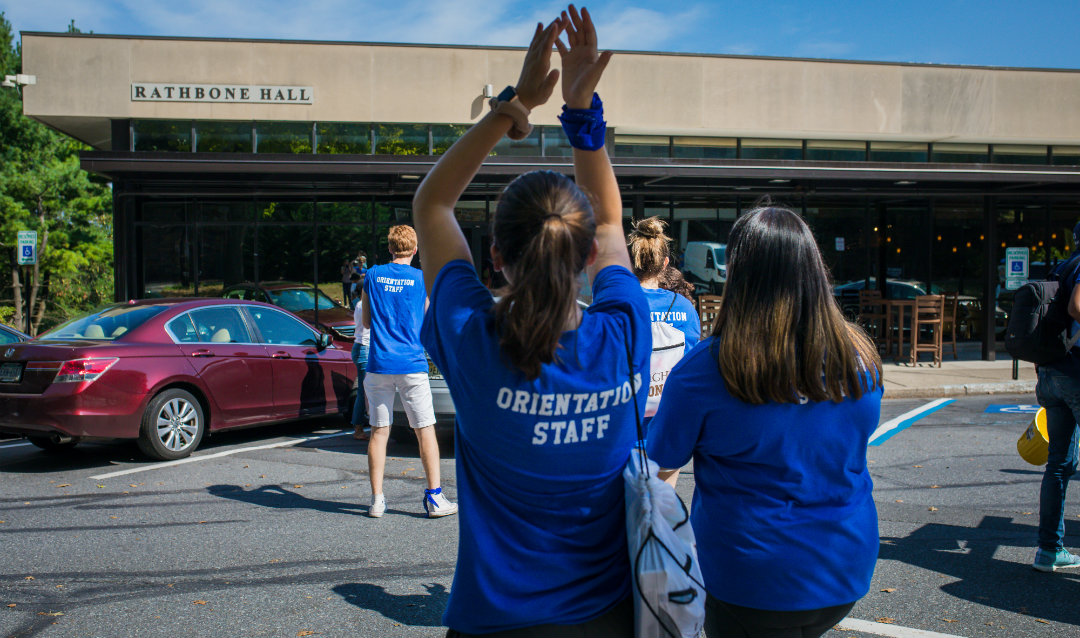 MOOV volunteers cheer as they approach the vehicle of a first-year student on Move-In Day. 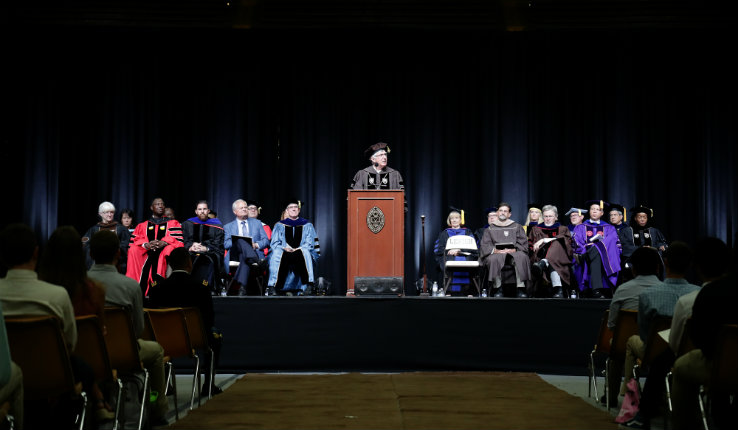 Convocation marked the official start of the 2019-2020 academic year.