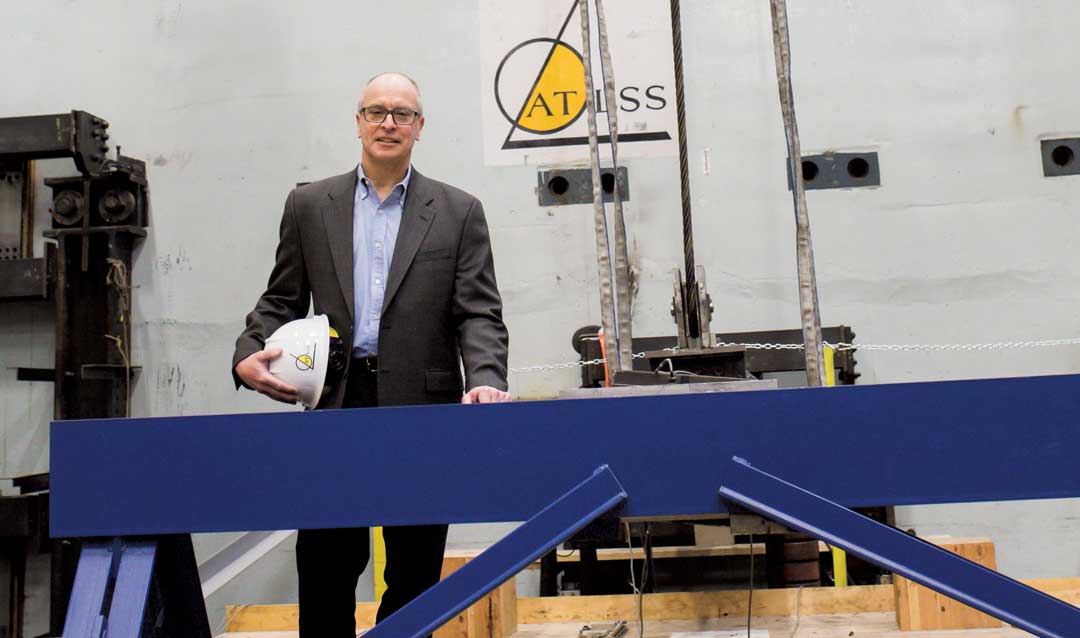 Richard Sause joined ATLSS as a faculty associate in 1989. He is transitioning to a new leadership role as director of the Institute for Cyber Physical Infrastructure and Energy.

Longtime ATLSS Director Richard Sause Takes on his Next Challenge

In 1986, when Lehigh created the ATLSS (Advanced Technology for Large-Structural Systems) Engineering Research Center in partnership with the National Science Foundation, the concept of interdisciplinary team science was far from the norm. Perhaps, even revolutionary.

“Lehigh made an enormous investment of space and financial resources to make the vision of the ATLSS ERC—engineers from different specialties working alongside materials scientists, computer scientists, chemists and economists to address America’s crumbling infrastructure—a reality,” says Director Richard Sause, who initially joined ATLSS as a faculty associate in 1989.

“I suppose it was a calculated risk, but a significant risk nonetheless,” he says, “ ... and the payback has been remarkable.”

Now, after 20 years at the helm of one of the university’s earliest and most successful cross-disciplinary research hubs, Sause is transitioning to a new leadership role as director of the Institute for Cyber Physical Infrastructure and Energy. I-CPIE is one of three Interdisciplinary Research Institutes (IRIs) launched in 2018 to tackle societal-scale grand challenges.

“We are in a new era of multidisciplinary team science at Lehigh, and I am optimistic about where it will lead,” he says.

So far, the journey has been productive. Out of the cavernous, state-of-the-art ATLSS lab on the Mountaintop Campus have come new steel and concrete materials for constructing and repairing infrastructure, novel highway bridge systems and advances in earthquake-resistant and blast-resistant structural systems for buildings. ATLSS researchers have spearheaded new methods for laboratory assessment of structural systems, including hybrid simulation (combining computer simulation with physical testing), and conducted novel research on risk, resilience, sustainability and life cycle assessment of infrastructure systems.

Many existing structures, including critical long-span bridges in New York City, such as the Williamsburg Bridge, have been restored using technology developed and proven at ATLSS. Broader impacts on new structures have been achieved through improvements in design and construction codes.

“If you go across any steel highway bridge on your way home this evening that was built or rebuilt within the past 25 years,” Sause says, as an example, “you will be using a structure made safer by ATLSS research.”

“Larger labs have been built elsewhere,” he notes, “but ATLSS remains among the very best—internationally recognized—because of the skill, creativity and hard work of our staff, as well as the knowledge and creativity of the faculty and the students.” Dozens of the students have gone on to faculty positions around the world. Sause credits the core ATLSS faculty—Professors James Ricles, Dan Frangopol, Clay Naito, Stephen Pessiki, Shamim Pakzad, Muhannad Suleiman, Paolo Bocchini and Spencer Quiel—and the broader group of Lehigh faculty that they collaborate with, for keeping the center vibrant with unique perspectives and superlative accomplishments.

While knowledge has advanced dramatically and technology has undergone generations of evolution, Sause explains, America’s infrastructure grand challenge persists. The need for infrastructure systems that are sustainable, resilient, durable, adaptable and safe—at the lowest possible cost—endures.

Lehigh’s renewed emphasis on multidisciplinary teams bodes well for ATLSS, which is now under the umbrella of I-CPIE, he says.

“With the IRIs providing both a broad perspective and areas of focus, ATLSS faculty are working with another 20 or more faculty and research scientists on critical grand challenges across a broad range of infrastructure, energy, intelligent systems and materials applications.”

“Take the new $2 million DOE project on offshore wind turbines, led by Muhannad Suleiman [associate professor of civil and environmental engineering],” says Sause. “It builds on our past accomplishments, it depends on research contributions from faculty in various disciplines, including Arindam Banerjee and Justin Jaworski [mechanical engineering and mechanics], and it has great potential for creating new knowledge and positive societal impact—just one more example of the return on Lehigh’s initial ATLSS investment.”