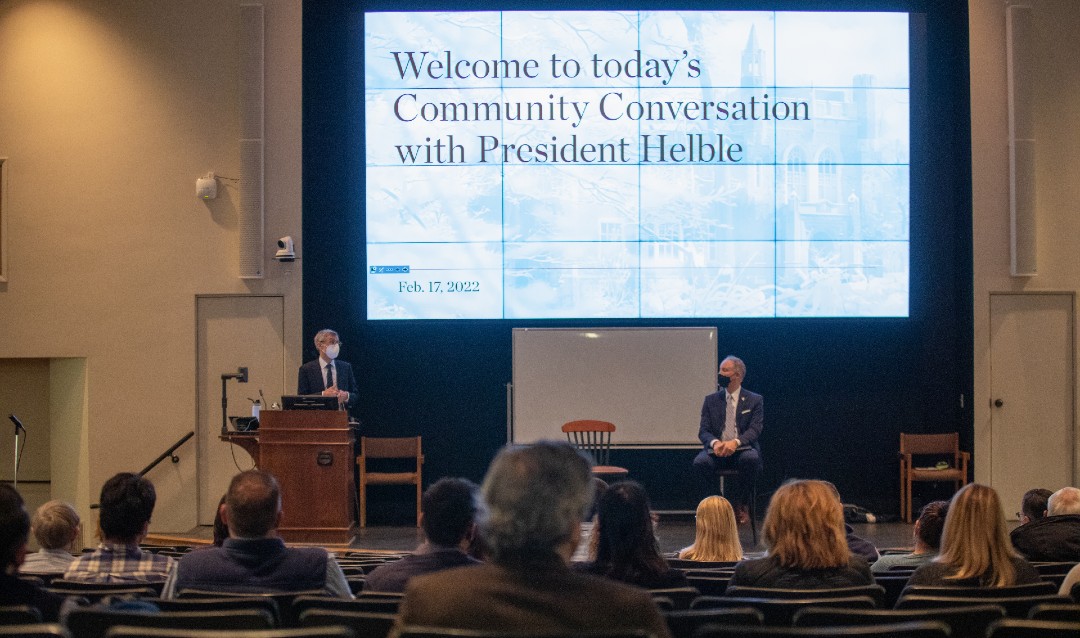 Lehigh President Joseph J. Helble ’82 spoke about the state of the university during his second community conversation of the 2021-2022 academic year.

Lehigh President Joseph J. Helble: ‘Every Voice in This Community is Important’

In his second community conversation of the 2021-2022 academic year, Lehigh President Joseph J. Helble ’82 spoke Thursday about the state of the university, outlined the steps Lehigh has taken during the pandemic and talked about plans to kick off a new strategic planning process.

A self-described “numbers person,” Helble put the past few months into perspective as, he said, Lehigh moves closer to a more typical academic year: 1,092 in-person sections of undergraduate courses, enrolling some 23,000 students.

“Four years ago, we would have shrugged our shoulders and said, ‘That's normal.’ But if you think about that, in the context of where we were a year ago, that is extraordinary,” said Helble, addressing the students, faculty and staff who turned out for the in-person forum in Packard Lab, Room 101. A virtual event also was held Thursday evening, with question-and-answer segments as part of both conversations.

Lehigh offered at least 59 new in-person courses this semester, on topics including Afro-Latino social movements in Latin America and the Caribbean, bioethics and the law, and blockchain concepts and applications, which, he said, reflects the continuing creativity of Lehigh faculty and their desire to bring contemporary content to students. He cited other numbers as well: 170 in-person lab sections, 34 studio sections, 62 musical performance sections, and 213 in-person graduate course sections enrolling another 1,500 students.

“We are busy as a campus,” Helble said.

Additionally, there were more than 200 research proposals submitted by faculty by the end of January, seeking $128 million in funding, and 72 new awards totaling $22 million in funding. In another sign of a return to close-to-normalcy, Helble said, Lehigh’s athletic teams have attracted some 8,000 attendees total at women's basketball games, 9,000 at men’s basketball games and 11,000 attendees at wrestling matches. Helble said that the university’s social and cultural organizations, as well as the arts, have been active with events.

Since arriving on campus in August to serve as Lehigh’s 15th president, Helble said he has been meeting with as many students, staff and faculty as he can, including talking with those who join him at 6:30 a.m. on Tuesdays for his Pace the Prez weekly runs. He said members of the senior leadership team have been asking for feedback as well, on matters both big and small. 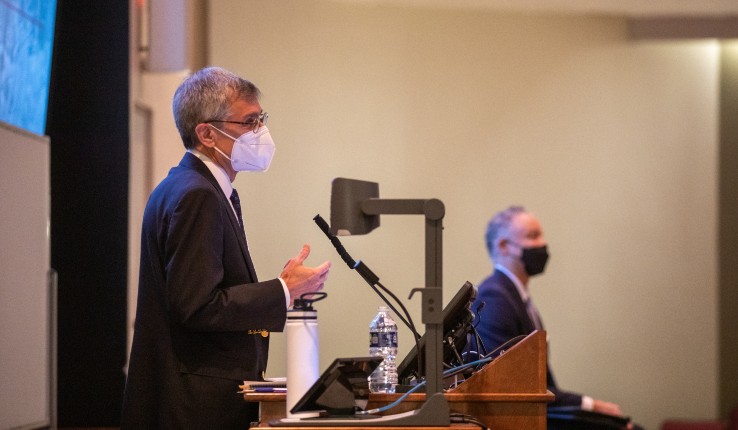 Joseph J. Helble ’82 said he has been meeting with as many students, staff and faculty as he can since he arrived on campus in August to serve as Lehigh's 15th president.

Among the issues raised through those conversations was the impact of the pandemic on dining services and the need for more opportunities for social engagement and interactions. In response to feedback, Helble said, more dining options are becoming available, including bringing food trucks to Williams Hall, the opening of the Hillside Cafe and GrubHub deliveries. As part of the “Clutch the Cold” series designed to bring the Lehigh community together, food and refreshments were served at the Clayton University Center flagpole on the day of the Community Conversation.

In response to feedback from faculty and department chairs regarding delays in preparing labs and research spaces for incoming faculty, Helble said, Provost Nathan Urban is working with deans and the facilities team to ensure that research spaces are ready within six months of a faculty member's arrival at Lehigh.

Also, following feedback for more mental health services, Helble said the administration has taken steps to address that need, including moving to hire an additional staff psychologist and securing 24/7 tele-support with multiple language options. And he said efforts in support of Lehigh’s diversity, inclusion and equity goals continue, with the development of key performance indicators to measure Lehigh’s progress toward these essential goals for the university. He said he expects those key performance indicators to be completed and shared with the Lehigh community later in the spring semester.

As Lehigh begins its next strategic planning process, Helble said the objective will be to define shared goals and aspirations for the next decade.

“I want it to be aspirational,” he said. “But I also want it to be operational. I do not want it to result in simply a statement of high-level aspirations. I'm going to be asking us to develop plans with tangible milestones, markers and goals so that we can measure our progress along the way and know that it's something specific that we are aiming for as a community.”

In his conversations, Helble said, students often point to a strong sense of community at Lehigh. He said there have been times that he’s gotten choked up listening to students speak about what Lehigh has meant to them and for their growth as individuals.

“We will always be imperfect,” Helble said. “We will always be a work in progress. We should always strive to be better. Every voice in this community is important, and my aspiration is that through our work collectively, we will all know that, understand that, support that. That sense of community is so central to who we are in pursuit of academic excellence. It is not one or the other. It is building an inclusive and supportive community, collectively united in pursuit of academic excellence." 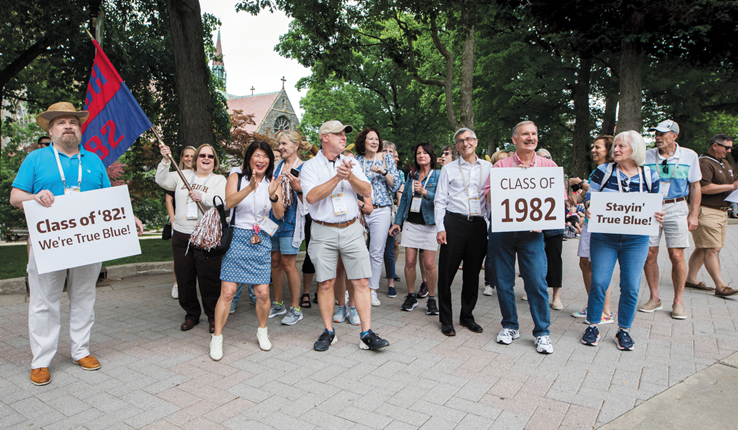 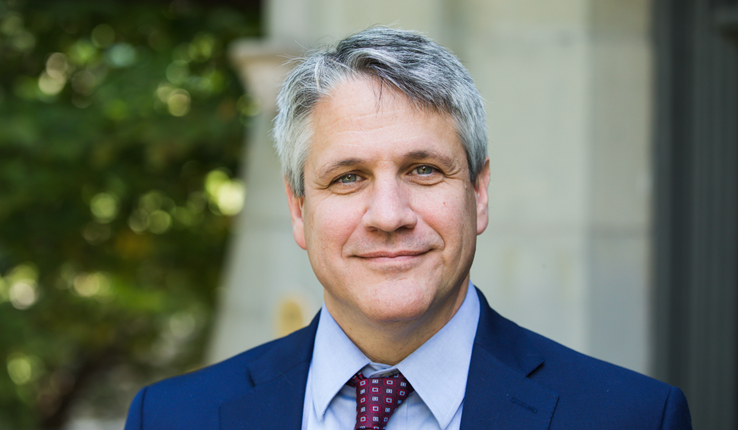 David Rubenstein, who joined Lehigh in July 2019 as the first executive director of the Health and Wellness Center, offers thoughts on health and wellness as he transitions to a new faculty role. 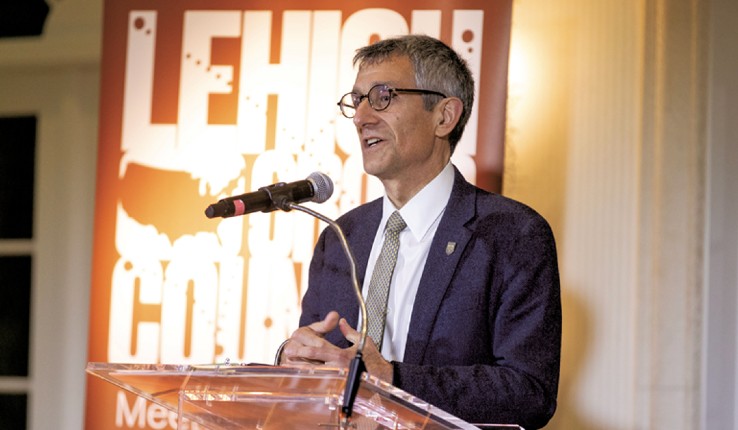