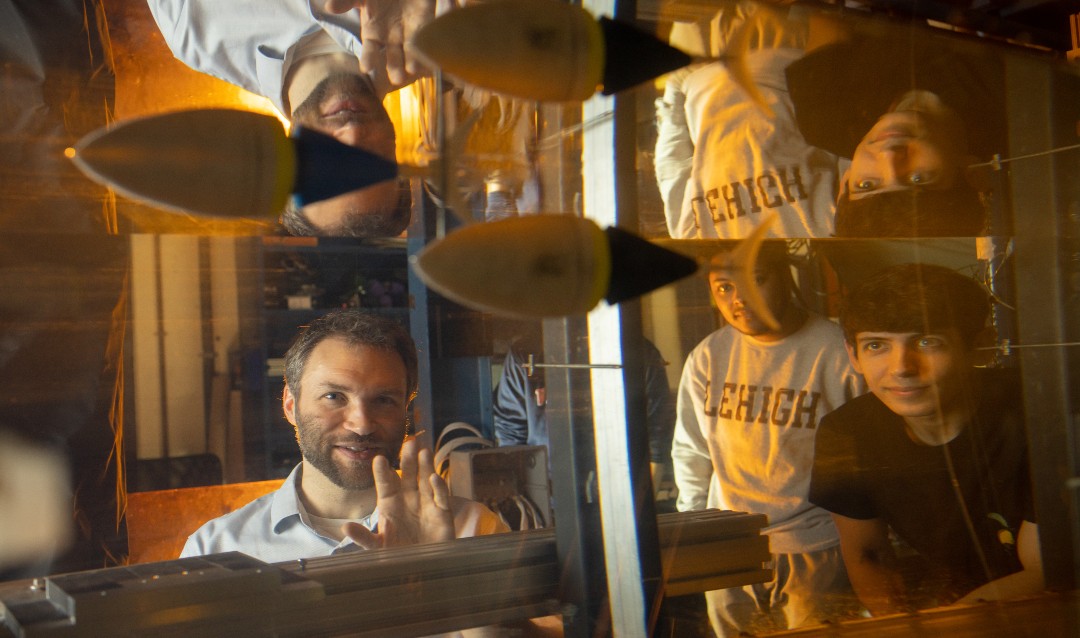 Keith Moored, associate professor of mechanical engineering and mechanics at Lehigh, is leading a team of interdisciplinary researchers who aim to develop the next generation of bio-inspired underwater vehicles. From left, Moored with students Ben Kramer '23 (partially obscured), Zemichael Gebeyehu '24 and Ph.D. student Pedro Ormonde.

An interdisciplinary team of researchers led by Keith Moored, associate professor of mechanical engineering and mechanics at Lehigh, has been awarded $7.5 million from the U.S. Department of Defense to help develop fast and efficient schools of bio-inspired underwater vehicles.

As part of the prestigious, five-year Multidisciplinary University Research Initiatives (MURI) award, Moored and colleagues from the University of Virginia and Harvard and Princeton universities aim to discover and demonstrate the hydrodynamic principles behind high-speed, high-efficiency fish and bio-robotic schooling.

“It's important, particularly from the Navy's perspective, in order to build the next generation of underwater vehicles,” Moored said. “If you look at how the military operates in the air, we have drones that can do all sorts of things … but we don't have that same kind of equivalent underwater. The Navy has been trying to invest in underwater drone technology that can serve a lot of purposes–where you can keep people out of harm’s way and do things like surveillance and reconnaissance, but also underwater mine detection and removal.”

Moored said a deeper understanding of fluid dynamic interactions will enable bio-inspired robots to perform these tasks more effectively and with less energy as a group, just like fish in a school. 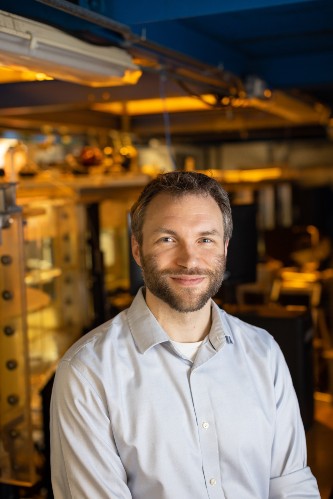 “We know that there are some benefits by having fish swim together, from a performance standpoint,” he said. “They can actually swim faster when they swim together. They can actually swim more efficiently as a group than they can individually. What we're looking at is, really, understanding this better … so that ultimately we can design a school of bio-inspired robots to swim together in a beneficial way.  And when [the bots] are deployed for a mission, they can go do distributed tasks, so that it's not just one bot going to do something, but they can spread out and go map an area, do reconnaissance or surveillance on other underwater vehicles, sweep for mines, or other missions along those lines.”

In addition to Moored, the principal investigators on the project are Daniel Quinn, Haibo Dong and Hilary Bart-Smith, all from the University of Virginia; George Lauder of Harvard University and Radhika Nagpal of Princeton University.

“In terms of major goals, we’re looking at a couple different things,” Moored said. “We're really trying to understand how we derive hydrodynamic benefits and what is the optimal schooling pattern in order to do that. The placement of fish within the school changes what kind of benefits are derived, but also the synchronization of their tail motion matters a lot too. We need to understand that kind of space better, of how the synchronization and placement of fish affects the hydrodynamic benefits.”

Additionally, Moored said, “There are also forces that push and pull the fish around in the school, that are derived completely from the hydrodynamic interactions between the fish. That may be linked to how the fish school is actually arranged in terms of its formation. We're trying to understand these pushing and pulling forces and whether they’re sculpting the patterns of formations that we see in real fish schools, and whether that's something we can take advantage of in a robotic system.”

Ideally, Moored said, researchers might be able to have the robotic devices swim in a specific formation by taking advantage of the right physics, rather than having to build controllers to affect their positions.

The team will build robotic devices as test beds and scientific demonstrators to prove, or disprove, hypotheses. It is currently working with two types: tuna bots developed by Bart-Smith’s team at the University of Virginia that are about eight to 10 inches in length, and blue bots created by Nagpal, who is now at Princeton, that are about five or six inches in length.

At Lehigh, the project will fund one postdoctoral scholar, two graduate students and several undergraduate researchers each year. All told, some 30 to 40 researchers will be involved in the project.

We're really trying to understand how we derive hydrodynamic benefits and what is the optimal schooling pattern in order to do that.

Moored said Lehigh will focus its expertise on the fundamental physics involved.

“We take abstractions of these robots,” Moored said. “For instance, we may look just at a model of the tailfin by itself, which is the main propulsive element of the specialized robots, and we will look at having two or more of these tailfins by themselves interacting. That abstraction is useful because it has all of the salient features of these robots. Some of the details are missing, which makes things simpler for us to analyze it with, but it has enough of the physics there that we can understand these kinds of complex interactions much better. We're going to do these more simple experiments with what we call hydrofoils interacting with each other.”

The Lehigh team also will conduct fluid dynamics simulations with its in-house computer codes, to better understand the fundamental physics at play in more idealized configurations. The team will push out what it learns about optimal placement and synchronization of the swimming hydrofoils to the other researchers for additional testing, experiments and demonstrations.

Moored’s work in fluid dynamic interactions also earned him a National Science Foundation (NSF) CAREER Award in 2017. The NSF CAREER program is considered one of the most prestigious awards granted by the NSF and are awarded annually in support of faculty who exemplify the role of teacher-scholars through research, education and the integration of education and research.  He also has been part of a research team studying the fluid mechanics of tuna and other aquatic animals as part of a $7 million-plus multi-university project supported by the Office of Naval Research.

“I just always had a fascination with the ocean and with new technologies as well,” Moored said, “and so bringing these pieces together in my own work has been very rewarding.”