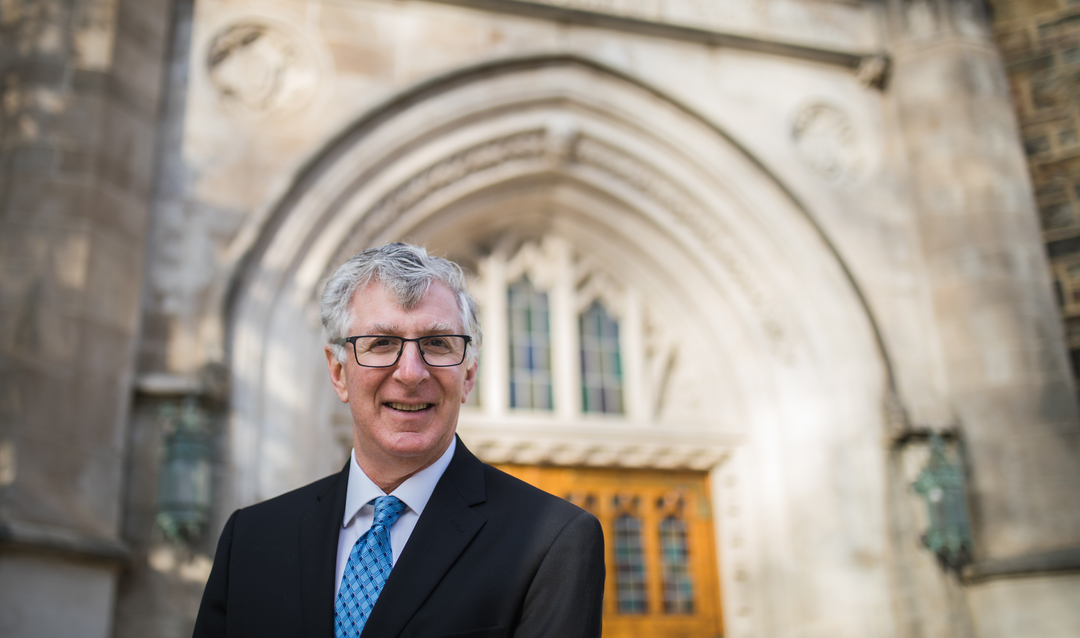 Simon introduced the ambitious Path to Prominence plan, which presents a bold academic vision for Lehigh.

Simon, an internationally renowned chemist, assumed the Lehigh presidency in July 2015 and was formally installed at the Founder’s Day ceremony later that year. He introduced the ambitious Path to Prominence plan, which presented a bold academic vision for Lehigh. The plan, which was unanimously endorsed by the Trustees, outlined a series of sweeping, decisive steps that will prepare Lehigh to build upon its legacy and ultimately stand among the best in higher education for generations to come. The plan is focused on creating a transformative student experience, expanding research to address society’s most pressing challenges, and leading a campus infrastructure initiative to provide new and redesigned venues for research, discovery, and student life.

“Our vote to extend President Simon’s contract is testament to the great confidence we have in him to lead Lehigh into the future,” said Clayton. “In the time he has been here, we have already seen tremendous progress and we know that momentum will continue. Our Trustees look forward to working with him to help Lehigh move forward on the Path to Prominence.”

Simon expressed his gratitude for the support of the trustees and pledged to continue to make significant progress in academic excellence, research, and infrastructure. “I look forward to collaborating with our Trustees, students, faculty, and staff—along with our alumni, friends, supporters, and the City of Bethlehem—on what is clearly a shared goal: making Lehigh University one of the most dynamic universities in the nation,” he said. “It’s an incredibly exciting time for our university, and I’m honored to be a part of its evolution.”

A Record of Accomplishment

Under Simon’s leadership, the university is expanding the student population, increasing access for a more geographically diverse student body (including first-gen students), has launched a new College of Health and appointed its inaugural dean, and is building new residential complexes. Construction on the new Health, Science and Technology building, the home of the College of Health, will begin this summer.

The university entered into a partnership with the Nasdaq Center in San Francisco, California in 2016, and has since developed signature programs that distinguish Lehigh in the entrepreneurship space.

Looking at the international stage, Simon has focused on creating opportunities in India. These include undergraduate and graduate recruiting, alumni engagement, student exchanges, and a new partnership with Ashoka University focused on entrepreneurial and collaborative programs that will benefit both institution’s faculty, students, and staff. Lehigh is also exploring collaborative opportunities in Peru, and continuing to develop partners and strategies with universities in China.

Understanding the importance of maintaining an open and positive relationship with the City of Bethlehem, Simon has collaborated with the mayor and the city and South Bethlehem. With a focus on integrating Lehigh with the local community, he has explored ways to bring the university into South Bethlehem, most notably through the new Third and New Street building, Brinker Lofts, the soon-to-be-completed SouthSide Commons residential living space, and further collaboration with ArtsQuest.

Physical infrastructure changes have also occurred at Lehigh during Simon’s Presidency. Several  restoration and renovation projects on the Asa Packer Campus and the Mountaintop campus are nearing completion, and include the restoration and update of the historic Chandler-Ullmann building and the conversion of Mountaintop’s Building C from a former Bethlehem Steel research center into a contemporary, forward-looking academic environment that promotes creative inquiry.

To support this far-reaching agenda, Simon joined with Clayton in launching the comprehensive “GO: The Campaign for Lehigh”—a $1 billion-plus fundraising and engagement effort that represents the most ambitious campaign in university history. The campaign launched in October 2018 and has already announced several major gifts, including a $20 million gift from Kevin ’84 ’13P and Lisa Clayton ‘13P to fund the re-imagination and renovation of Lehigh’s iconic University Center; a $5 million gift from Kenneth R. French ’75 and Vickie A. French to create an endowed scholarship fund to expand student access; and a $5 million gift from Julie ’20P ’21P and Jordan Hitch ’88 ’20P ’21P to name the first of the New Residential Houses currently under construction.

More recently, Lehigh announced a $3 million gift from the H.S. Lee Family Foundation in honor of Professor of Physics Yong W. Kim to fund fellowships for graduate students in physics and mathematics, and a $3.5 million gift for the new Herbert G. Harmon Press Box in Goodman Stadium. The recently renovated and expanded press box was made possible by the gift from the HFO Foundation and Elaine Harmon and daughters Wendy and Debra ’83, in memory of longtime Lehigh benefactor John Harmon ’59.