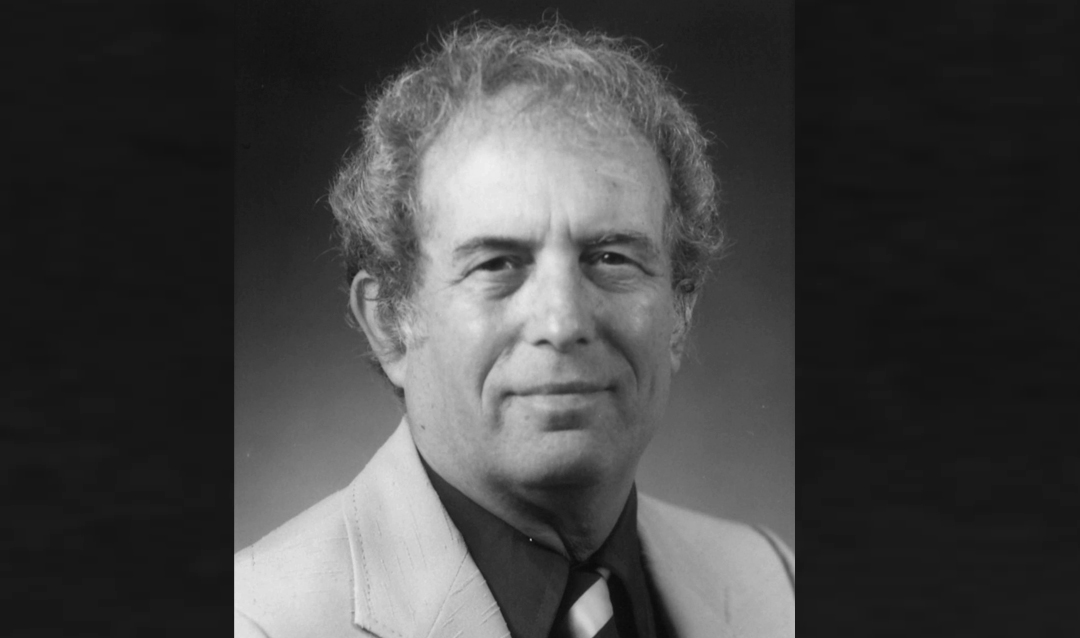 Betzalel Avitzur, who joined the Lehigh faculty in 1964 and founded the Institute for Metal Forming (now known as the Loewy Institute) in 1970, passed away on January 19.

Betzalel Avitzur, 96, a professor emeritus of materials science and engineering (MSE) and a world-renowned pioneer in the field of metal forming, passed away on January 19, 2022.

Avitzur joined the Lehigh faculty in 1964. He founded the Institute for Metal Forming (now known as the Loewy Institute) in 1970 and subsequently became its director.

At the time, the IMF sought to teach the principles and applications of metal forming technology to graduate and undergraduate students, to provide instruction and equipment for graduate research in metal forming processes, and to assist industry by providing solutions to metal forming problems.

Lehigh awarded Avitzur the Loewy Chair in materials forming and processing upon its establishment in 1993. 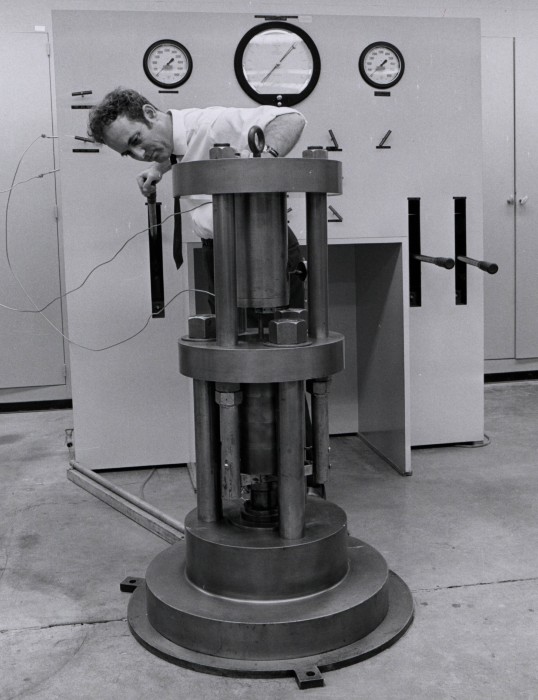 Betzalel Avitzur shown with machinery at Lehigh. The photo was taken around 1970.

“Professor Betzalel Avitzur was truly a leading authority in the field of metal forming. His work on upper bound theory has been recognized and respected all over the world and made the Institute for Metal Forming and Lehigh famous in metal deformation community.” says MSE professor and department chair Wojciech Misiolek, who worked alongside Avitzur while a visiting scholar at the IMF and later returned to Lehigh to succeed him as Loewy Chair.

According to a 1994 article published in LehighWeek, Avitzur “traced his interest in metal forming to his childhood, when he acted as an assistant to his father on the family’s hand-operated drill press. Later, he pioneered the mathematical treatment of metal forming processes through the concept of limit analysis.” At the time of the article’s publication, he was modeling the characteristics of friction.

Avitzur studied mechanical engineering at the Technion-Israel Institute of Technology (graduating with a B.Sc. and Dip.Ing. in 1949) and engaged in government research and development work in Israel prior to his doctoral studies. He received his PhD in mechanical engineering from the University of Michigan in Ann Arbor in 1959.

He then joined the Scientific Laboratory of Ford Motor Company, where his work included the study of the mechanical processes of plastic working of metals, such as rolling, wire drawing and extrusion, and spinning. While at Ford, he solved a critical safety issue in steering columns (voids that formed during the manufacturing process),  according to an obituary published in The Morning Call.

In 1961, he returned to Israel to teach in the mechanical engineering department at the Technion. 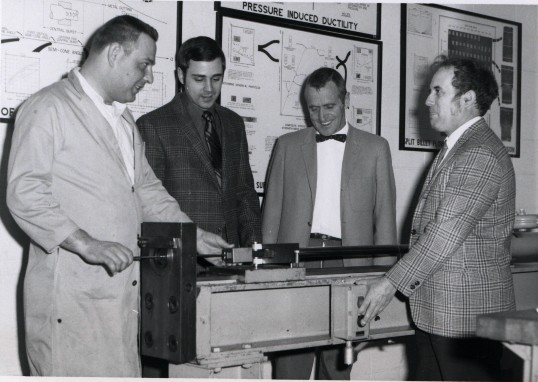 From left, J.F. Lovacs, Fred R. Sauerwine, Walter C.D. Hahn and Betzalel Avitzur at Lehigh. The photo was taken around 1970.

He was elected as a Fellow of the American Society of Mechanical Engineers (ASME) in 1982 and was a recipient of its Blackall Machine Tool and Gage Award in 1988. He became an honorary member of the Japan Society for Technology of Plasticity (JSTP) in 1993 and was recognized with the Mordica Memorial Award from the Wire Association International (WAI) in 1996.

Avitzur was an inventor and held patents for the seamless can and for the production of fine wire used in microchips, according to the obituary.

Avitzur’s research was funded by the National Science Foundation, the U.S. Department of Energy, and other organizations. He was a member of several professional society committees in metal forming and lubrication. He traveled the world as an invited lecturer and visiting professor.

He was active in research and consulting in metal forming and gross plastic deformation after retiring from Lehigh in 1995.

Details about Avitzur’s family and his personal interests, as well information about memorial contributions, can be found here.