Illuminating the Circuitry of the Brain 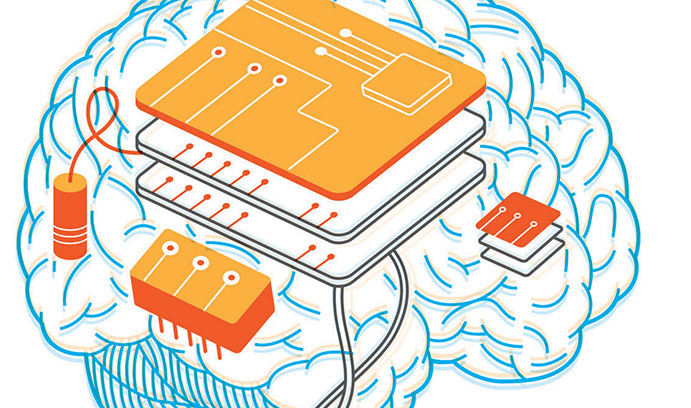 Science has provided a solid understanding of the anatomy of the brain, but there is still no reliable way to examine the neuron-to-neuron communication, which is critical to understanding the correlation between brain structure and brain function.

Chao Zhou, assistant professor of electrical and computer engineering, likens current brain-mapping techniques to a Global Positioning System (GPS) that can help a user locate a city, but cannot offer a street-level view. These techniques allow researchers to observe layers of the brain and understand how different parts relate to each other, but they cannot examine the activity of a single neuron (nerve cell) or network of neurons in live tissue. There is no “street-level” map of a living brain.

Without such a map, said Zhou, medicine remains in the dark about the most effective ways to treat, prevent and cure brain disorders like Alzheimer’s, schizophrenia, autism, epilepsy and traumatic brain injury.

President Obama’s BRAIN (Brain Research through Advancing Innovative Neurotechnologies) Initiative aims to fast-track the search for enlightenment. Announced in 2013, BRAIN supports the development and application of innovative technologies that can create a dynamic understanding of brain function and help uncover the mysteries of brain disorders.

One important step in achieving the initiative’s goals is the development of optical techniques that are sensitive enough to image at the level of single neurons and fast enough to image live tissue.

Most current neural recording techniques use electrodes or require neurons to be labeled with a genetic or chemical probe in order to view neuronal action potential (the sending of electricity from one neuron to another). These methods have their downsides, said Yevgeny Berdichevsky, assistant professor of electrical and computer engineering at Lehigh and principal investigator in the Neural Engineering Lab. Berdichevsky and Zhou are both core faculty members in Lehigh’s bioengineering program.

“While effective, it is not clear that electrodes are able to pick up activity in every neuron—they are also quite invasive,” said Berdichevsky. “A marker introduced chemically has the potential to be toxic. It also might be too slow to pick up all the action potentials. Brain imaging cannot currently be done genetically in humans due to safety concerns.”

To tackle this 21st century challenge, Zhou and Berdichevsky have joined forces to explore the use of a noninvasive, ultrahigh-speed biomedical imaging technology known as space-division multiplexing optical coherence tomography (SDM-OCT). The technique could potentially map the brain using light—and it does not require that neurons be labeled.

Originally developed for use in ophthalmology, optical coherence tomography (OCT) works by capturing light as it reflects off the surface of living tissue. According to Zhou, more than 30 million people worldwide per year have their eyes examined using OCT, a noninvasive test that uses light waves to take cross-section images of the retina.

Zhou is pioneering a key improvement to OCT that will enable a faster, more sensitive exam to detect eye diseases such as macular degeneration and glaucoma. His patent-approved diagnostic instrument uses space-division multiplexing to achieve imaging at ten times the speed of current OCT imaging.

The National Institutes of Health (NIH) have awarded Zhou and Berdichevsky a grant to explore the adaptation of OCT to achieve large-scale imaging of neural activity at the single cell-level—a potential game-changer in brain imaging.

When neurons fire action potentials, they undergo ultra-small changes in size and shape, and OCT should be able to detect these changes as differences in the reflected light patterns. If OCT is successful in living animals, it could produce label-free and depth-resolved images of activity from thousands of neurons with micron-scale spatial resolution and sub-millisecond temporal resolution.

In other words, SDM-OCT could provide that crucial “street-level” view of the brain researchers need to advance understanding of brain function.

Zhou and Berdichevsky demonstrated the ability of OCT to provide parallel and synchronized imaging from hundreds of neurons simultaneously in a study they conducted of neuronal changes in 3-D hippocampal cultures as a result of epilepsy.

The technique has not been explored much as a way to detect neural activity, said Berdichevsky.

“Once we were successful at using the technique to analyze epileptic tissue, we began to think about how it could be used to pick up signals from networks of neurons—something no one has done before,” he said.

SDM-OCT improves speed through parallel imaging and optical delay. To understand parallel imaging, consider how OCT is used in ophthalmology: a single laser beam moves back and forth over the eye. Parallel imaging splits that single beam into 4, 8 or 16 beams all imaging together.

“This is a lot like using multiple processors in a computer,” said Zhou. “SDM-OCT has the power of sixteen OCT machines working together, but is much less expensive than purchasing sixteen machines.”

“This allows the image to be mapped to different frequency bands—like tuning a radio,” said Zhou. “The delay separates the images for the light to detect different optical frequencies at the same time.”

Zhou and Berdichevsky plan to develop an integrated electrophysiology and ultrahigh-speed SDM-OCT imaging system to record fast intrinsic optical signals associated with neural activity. Validation studies will be performed in vitro in 2D neural cultures and in 3D organotypic brain cultures. Because each vertical cross-sectional OCT image will contain hundreds of neurons, intrinsic optical signals from thousands of neurons can be recorded simultaneously using SDM-OCT.

If successful, this label-free imaging technology could become a powerful platform to investigate the behavior of thousands of neurons in a network simultaneously, with the potential to significantly impact fundamental brain research. 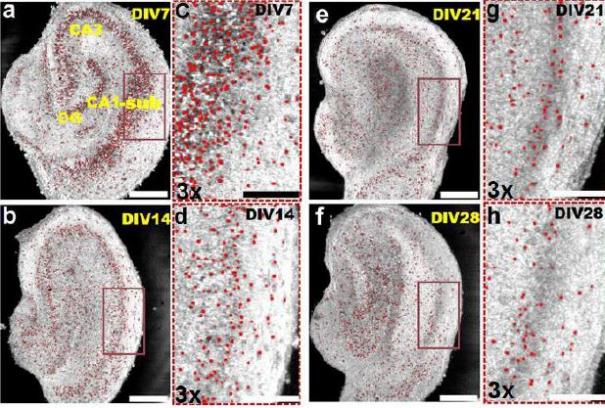