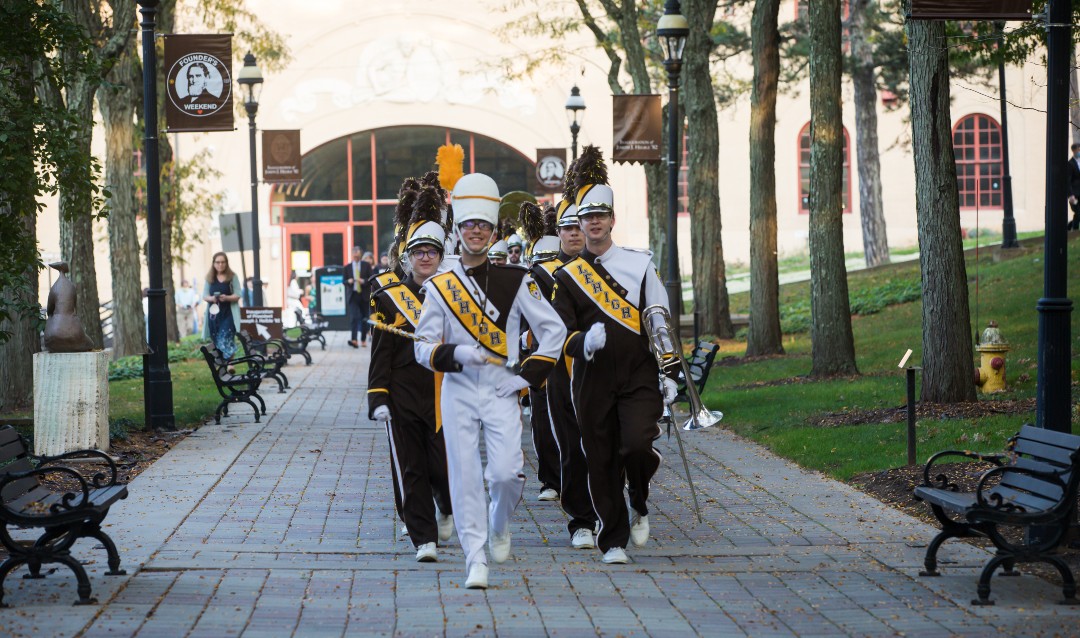 “Welcome home” was the resounding sentiment among students and alumni who celebrated Lehigh’s 15th President Joseph J. Helble ’82 on Friday evening with festivities including games, live music and food on the lawn at Clayton University Center.

“We are first-year students, so it’s like we are with him in his first year,” said Meredith Purcell ’25, a business student. She was enjoying the lawn party on an unseasonably warm October evening and preparing herself for Saturday’s Inauguration Fun Run, a 5k through campus with Helble, who successfully ran the Boston Marathon on Monday.

“We are celebrating him and a new era at Lehigh, and I hope he knows we are behind him,” Purcell said.

Walt Conway ’95 MBA, the assistant director of finance and administration systems at Lehigh, has been to several presidential inaugurations during his nearly 23 years working at the university, but Friday’s was extra special.

“I love the fact that Joe is an alumnus. It’s refreshing to see that,” Conway said. “‘Welcome home,’ because he is. He’s back home.”

“I have to say, it’s really special to have the opportunity to stand here and look up at the Clayton University Center and look out at the UC lawn, a place where I spent a lot of time as a student, a place that brings back fond memories for me,” Helble said as he addressed the crowd.

“Events like this where we celebrate moments in Lehigh’s past and also talk about where we are headed as an institution, I think are a perfect way to honor our traditions and celebrate the great trajectory that this incredible university is on,” Helble said. “Today also means a lot to me personally as I look around and see family and friends who made the long journey here to be with me…”

Before he left the stage, the Marching 97 presented Helble with his own dink, a brown felt hat usually embroidered with the recipient’s name that’s given on the first day of band camp.

Ben Davis ’22, a materials science and engineering Ph.D. student, served on the student committee that helped choose Lehigh’s next president. Davis said he was impressed by Helble’s engineering background.

“He’s very technical and in the mindset of problem-solving,” Davis said. But what stood out most of all, he said, was Helble’s loyalty to his roots.

“He has a lot of love for this place and a lot of good ideas to bring Lehigh into the future,” Davis said.

Although Friday was the official inauguration, Helble took over the role of president in mid-August, succeeding former President John D. Simon ’19P.

The inauguration ceremony took place in Tamerler Courtyard at the entrance to Zoellner Arts Center and was broadcast to an overflow audience on the Clayton University Center lawn where the party was held.

The lawn party featured food trucks and games like Skee-Ball and “axe throwing” with Velcro axes. In addition to the lawn party, the Founder’s Weekend’s events included a private dinner with Helble on Friday evening at the Mountaintop Campus. On Saturday a 5k Inauguration Fun Run was held through Lehigh’s campus. Other activities include a Founders Weekend Tailgate to cheer on the men’s soccer team as they take on Lafayette. 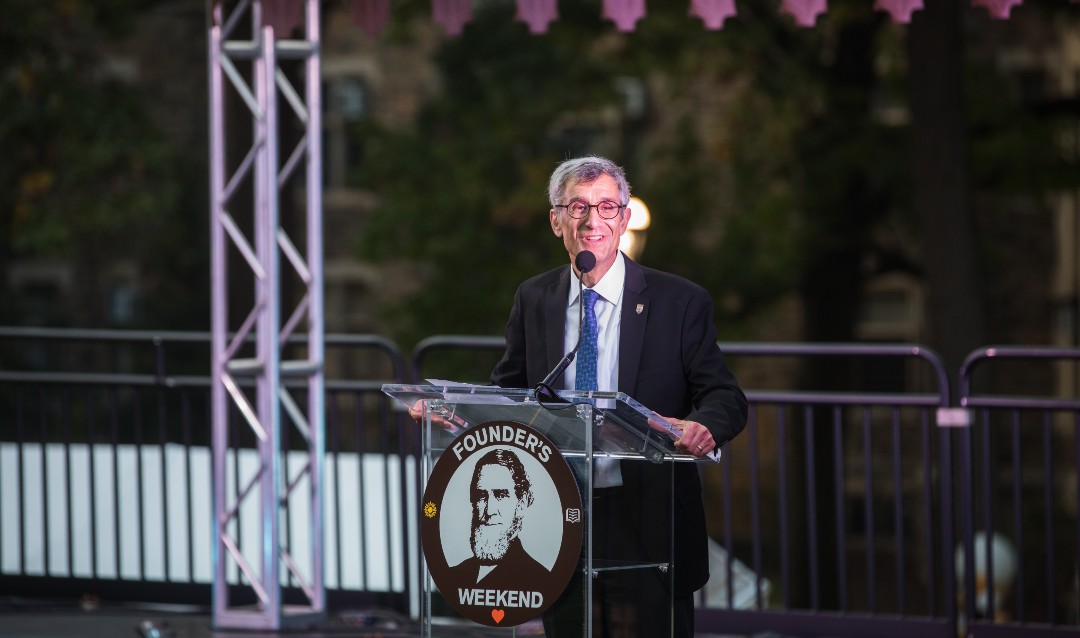 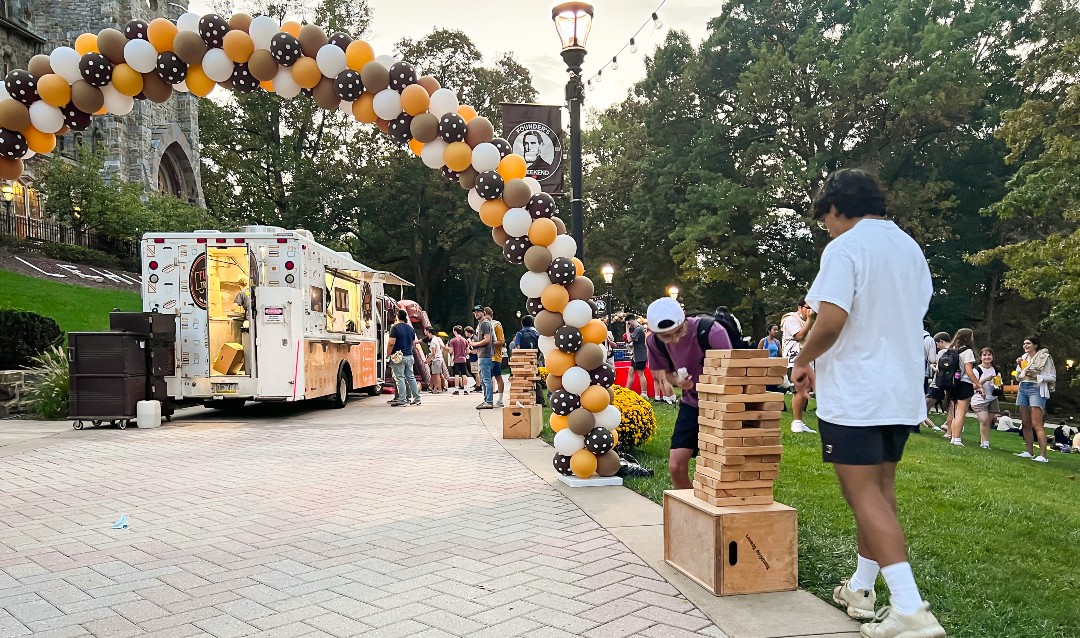 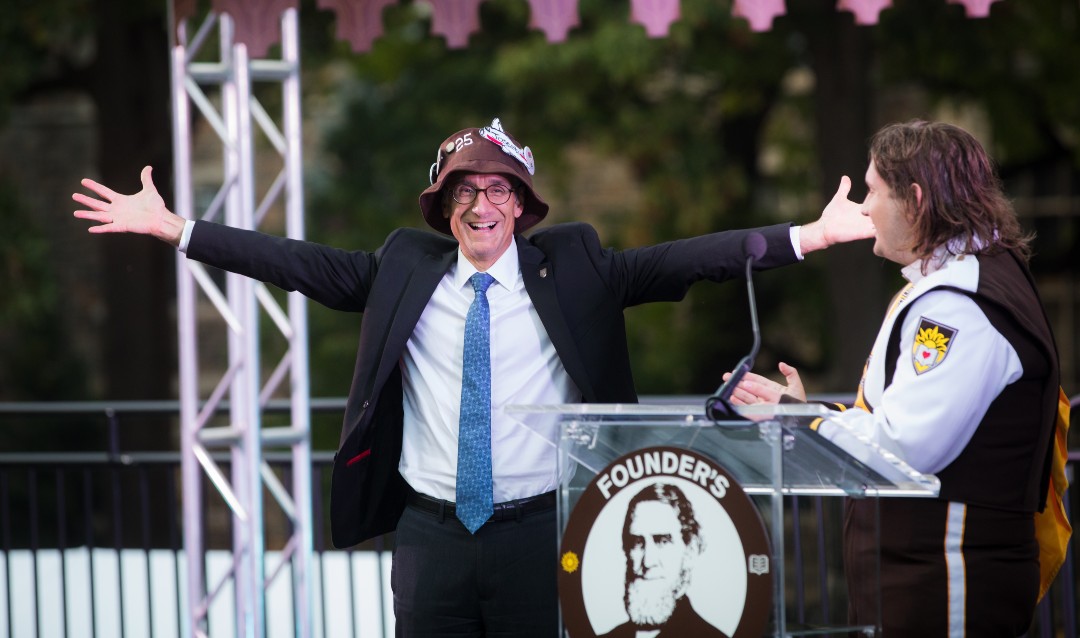 The Marching 97 presented President Joseph J. Helble '82 with a dink, a brown felt hat usually embroidered with the recipient’s name that’s given on the first day of band camp. 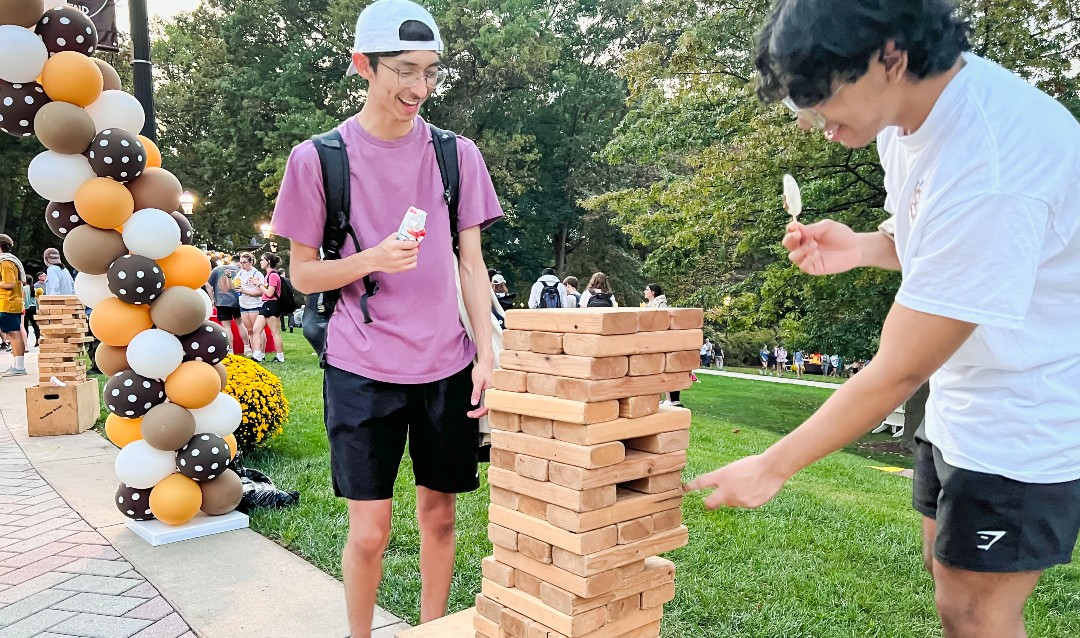 Students enjoy a game at the Inauguration Festival. 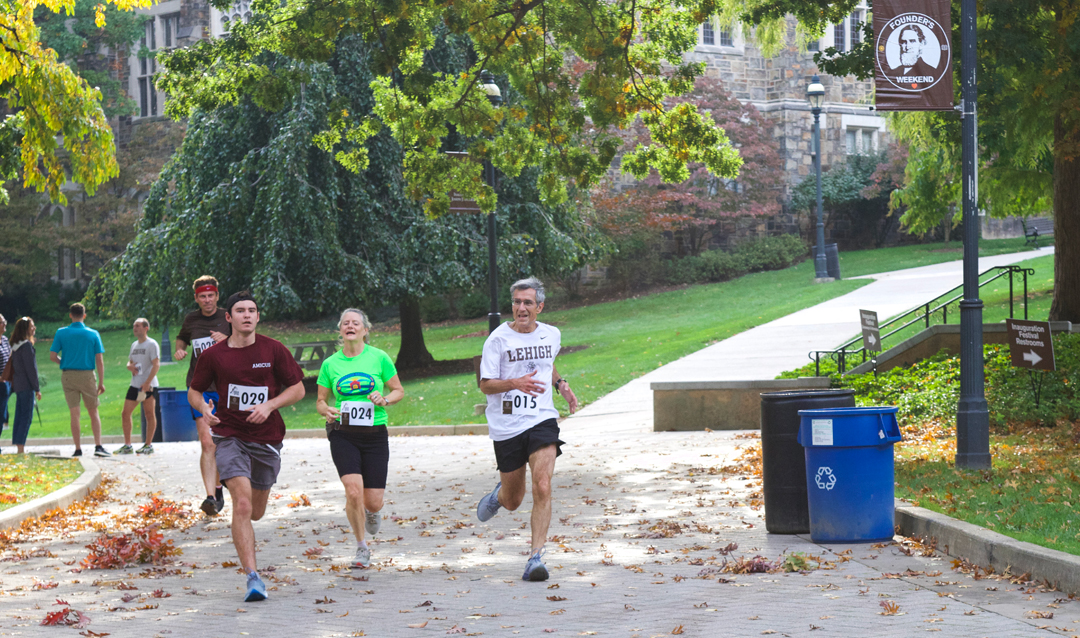 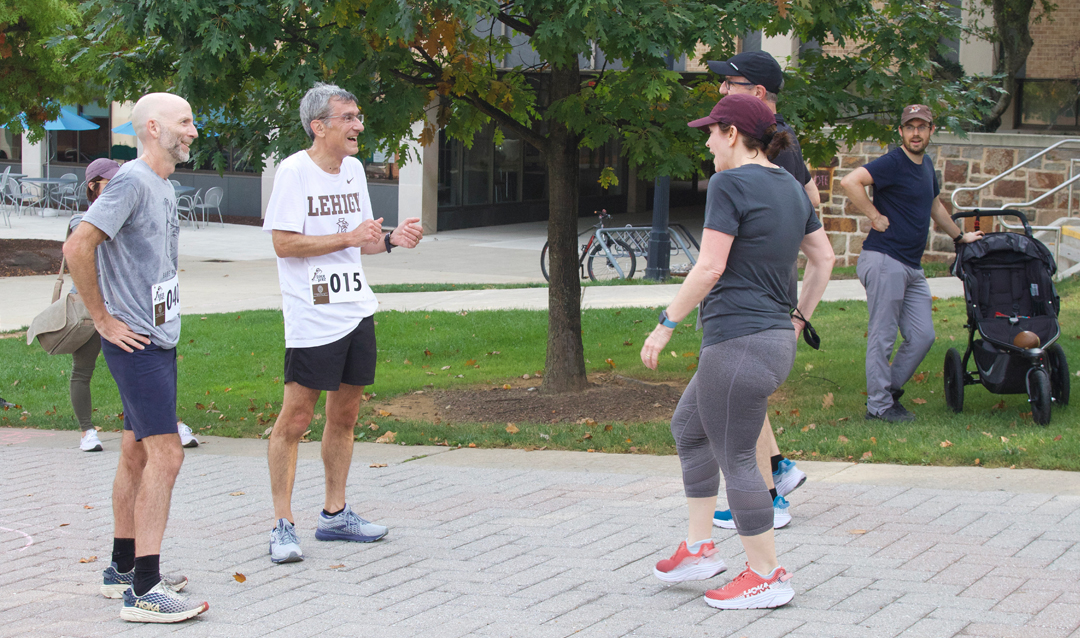 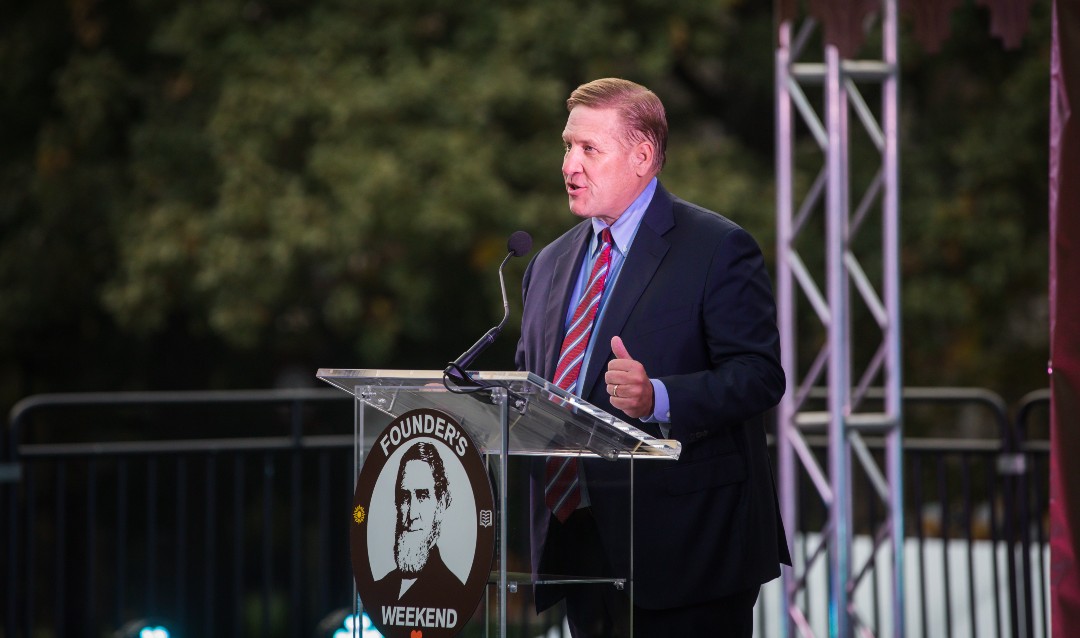 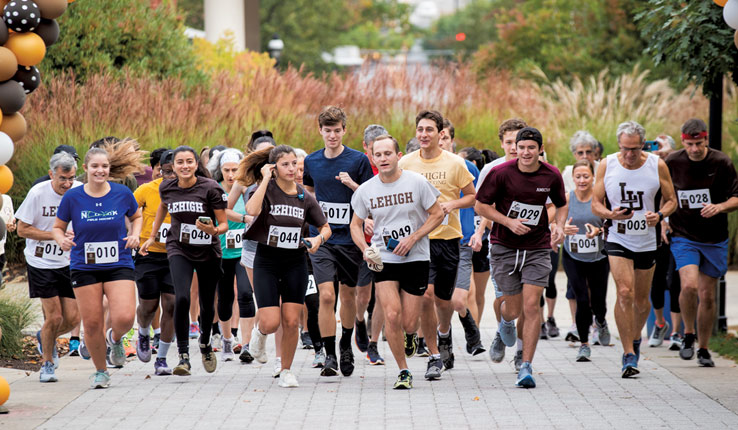 Reconnecting as a Community 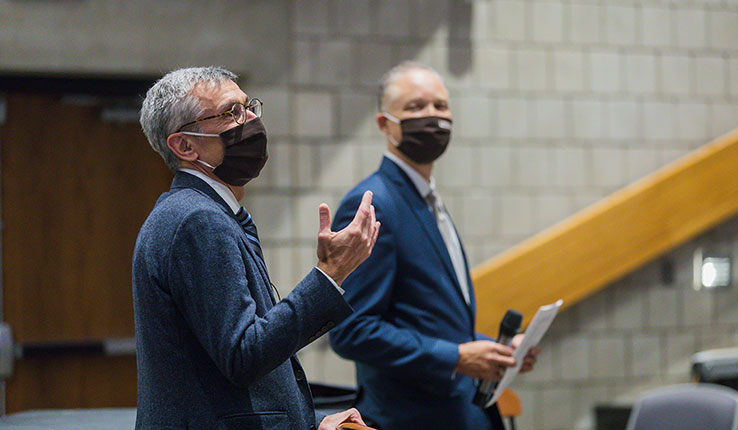 Lehigh President Joseph J. Helble: What Are Our Shared Aspirations?

Helble ’82 held two hour-long conversations Tuesday with members of the Lehigh community, in person and virtually. 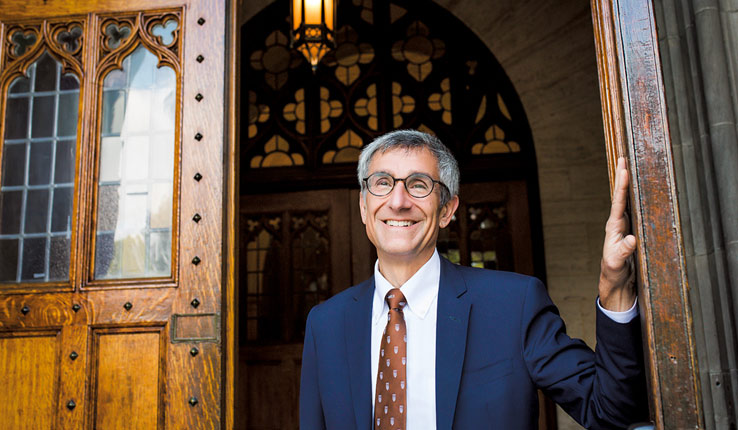 The Lehigh chemical engineering grad returns to his alma mater to lead the university that changed the course of his life.