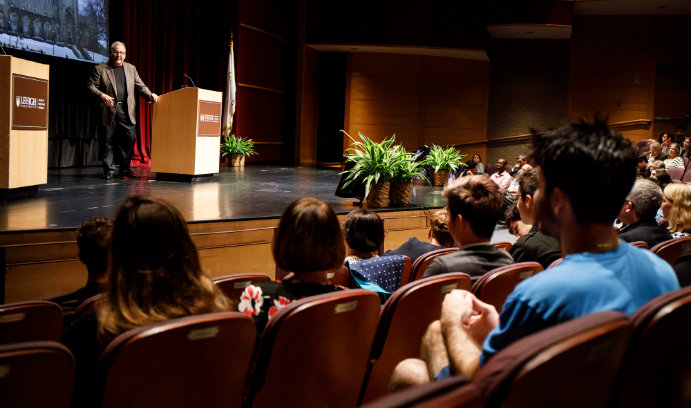 Fredrick D. Schaufeld ’81 ’15P ’17P shared how personal and professional experiences, luck, and Lehigh have affected his life and career at the Donald M. Gruhn ’49 Distinguished Finance Speaker Series held on Oct. 11. Students, faculty, and members of the Lehigh community braved the rain and gathered in Baker Hall for his presentation, Managing Luck: Lessons from Lehigh and Life When Not Everything Goes Quite as Planned. Schaufeld is co-founder and managing director of SWaN & Legend Venture Partners.

Georgette Chapman Phillips, the Kevin L. ’84 ’13P and Lisa A. ’13P Clayton Dean of the College of Business and Economics, thanked Judy and Donald Gruhn ’49 for their patronage of the series that brings industry leaders to campus to share their expertise and said, “The College is pleased to bring nationally and internationally recognized thought leaders such as Mr. Schaufeld to our campus, to address important business topics of the day.”

Luck, Schaufeld began, is a thing that is “never fair, and fundamentally something that you can’t manage. I want to tell you about a raw deal I had when I was going to Lehigh, but that deal gave me the wisdom to see some opportunities. It gave me the guts to deal with an unlucky break in my first job that turned into a lucky break that allowed me to build a sizeable business.”

Schaufeld was a government major at Lehigh with aspirations of becoming a lawyer. A member of Sigma Alpha Mu fraternity on campus, he described himself as shy outside of his fraternity.

“I had a lot of fear of failure and humiliation that prevented me from doing things that I knew I wanted to do,” he said.

The “raw deal” he alluded to came when, in his junior year, his father suddenly passed away. During that period, Schaufeld discovered the value of kindness when he received empathy from people close to him—English Professor Elizabeth Fifer, his fraternity brothers and his girlfriend (now wife), Karen Shihadeh Schaufeld ’83 ’15P ’17P. He has kept “kindness” in the forefront of everything he does.

His mother could no longer afford his tuition, which made him appreciate Lehigh even more with the thought that he might have to drop out. Scholarships ultimately saw him through his senior year to graduation. Being able to stay at Lehigh taught him to fear less and reach for opportunity more. That included running for Student Activities Council concert chair during his junior year.

“In baseball, you miss 100 percent of the pitches you don’t swing at. I was afraid, but I thought to myself, ‘Well, if I lose this election, I’d be a guy who lost an election–not the end of the world. I ran, and I won, and I got the greatest practical business experience I could imagine.”

The process of bringing more than 20 big-name acts such as Cheap Trick, Ozzy Osbourne, James Taylor and Yes to the Lehigh campus gave Schaufeld a hands-on education. He learned all aspects of running a business, such as booking acts and supporting staff, determining expenses and profit point, contract negotiations, marketing, customer service and more–skills that have served him well throughout his career.

Schaufeld’s first job was a commission-only position in Virginia, selling extended warranties to auto dealers by day and putting himself through law school at night. His “unlucky break” occurred when he learned that his employer was using highly unethical business practices of only insuring some of the clients who were buying warranties from Schaufeld.

“I was mortified,” said Schaufeld. “I had brought these car dealers into this thing!”

He smoothed things over with the dealers after proposing to the insurance company backing the warranties that they cut out Schaufeld’s employer and work directly with him to market and sell the product, skills that he learned at Lehigh.

That unlucky break turned into quite a lucky opportunity. Schaufeld had learned a great deal about the business of extended warranties, and realized that, while auto sales had contracted because of the oil crisis, sales of electronics like microwaves and VCRs were booming.

With Karen, Schaufeld started a pioneering company called National Electronics Warranty (NEW) out of their studio apartment. They first went after business with up-and-coming mass merchants such as Walmart, K-Mart, and Best Buy. The company succeeded on a grand scale, ultimately comprising 6,000 associates, including customer service representatives who were, Schaufeld described, “hired for their empathy.” They had 35,000 authorized service centers, provided outstanding 24/7 service, and answered 95 percent of calls in 30 seconds or less.

Years later, through sales of parts of his company and a merger with Asurion, of which he proudly stated that “between our employees and theirs, no one lost their job as a result of the merger,” Schaufeld was able to enter his second career, the venture capital private equity business called SWaN & Legend Venture Partners.

“We invest in special human beings who lead companies with social impact. Ethics mean a lot to us,” Schaufeld said. “We focus on companies people are passionate about.”

Schaufeld told the audience he wanted them to remember three important things from his experience. First, failure does not equal death.

“I failed a bunch of times,” he said. “Just like walking up the hill at Lehigh. If I was on the wrong path, I wouldn’t start over–I hated giving up altitude, so I’d go sideways a little bit.” He stressed that, wherever you are in your career, “you’re building a portfolio of ideas, relationships, networking and skill sets. When you fail, you might go back a little, but you can build on that and keep going forward.”

Second, “Your time is worth more than your money. If you’re miserable, do it a different way or do something else.”

Third, Schaufeld advised, “Don’t wait for wisdom to find you. You’re wealthy now, whether you realize it or not. I learned that at a relatively young age, with no money in my pocket.”

He told a poignant story about attending a “Beanie Bear breakfast” years ago at his son Jake’s kindergarten.

“He served breakfast to me and Beanie Bear. He was so proud! I went home and told Karen that this was one of the greatest moments of my life. I realized he loved and admired me, and that alone made me the richest man in the world.”

A robust question-and-answer session with students and faculty followed Schaufeld’s presentation.  Zetao “Andy” Weng ’19, a computer science and business major who receives the Judy and Donald M. Gruhn '49 Endowed Scholarship, said the most important message he took away from Schaufeld’s talk was something that’s not spoken about much, “the intersection between empathy and business. You can’t really build a business without having empathy behind it.” 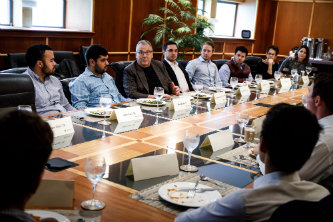 During lunch with faculty and students from the College of Business and Economics, Fredrick D. Schaufeld ’81 ’15P ’17P spoke about his career path and the importance of having strong ethics. Schaufeld’s wife, Karen ’83 ’15P ’17P, and their son Jacob ’15 (seated to his left) were also in attendance.

Giving Back to Pay It Forward

In her welcoming remarks, Georgette Chapman Phillips, the Kevin L. ’84 ’13P and Lisa A. ’13P Clayton Dean of the College of Business and Economics, thanked Judy and Donald Gruhn ’49 for all that they do for Lehigh and said their “generosity is felt across campus.”

The Gruhns’ impact on students, programs and facilities includes establishing a scholarship that has already helped 10 students; supporting the Financial Services Lab by providing for top technology, software and data needs; and creating the Gruhn Distinguished Speaker Series in Finance in 2008. The Gruhns have also provided for the Athletics Partnership Program, the journalism department, Linderman Library, the STEPS building, Zoellner Arts Center and the Martindale Society. In addition, Donald has been a long-standing and valued member of the university’s College of Business and Economics Dean’s Advisory Council.

He noted that Schaufeld and his wife, Karen ’83 ’15P ’17P, a Lehigh Board of Trustees member and College of Arts and Sciences Dean’s Advisory Council member, are generous benefactors who have supported the Lehigh Fund, Zoellner Arts Center and a number of College of Arts and Sciences initiatives. Ever passionate about providing international students access to a Lehigh education, the Schaufelds established an endowed scholarship fund in their namesake that has already helped more than 10 students. 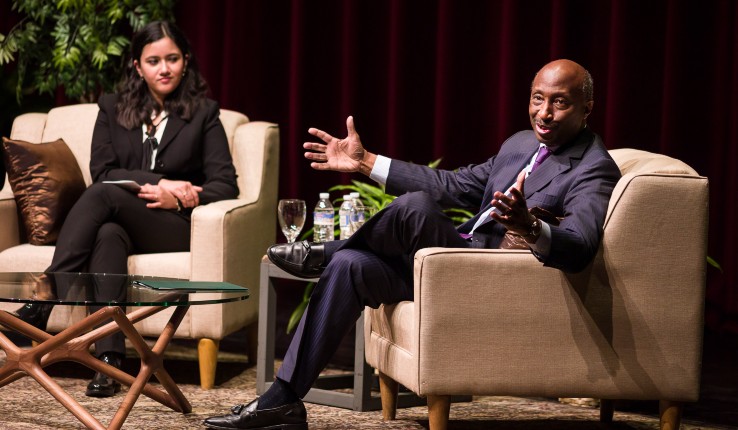 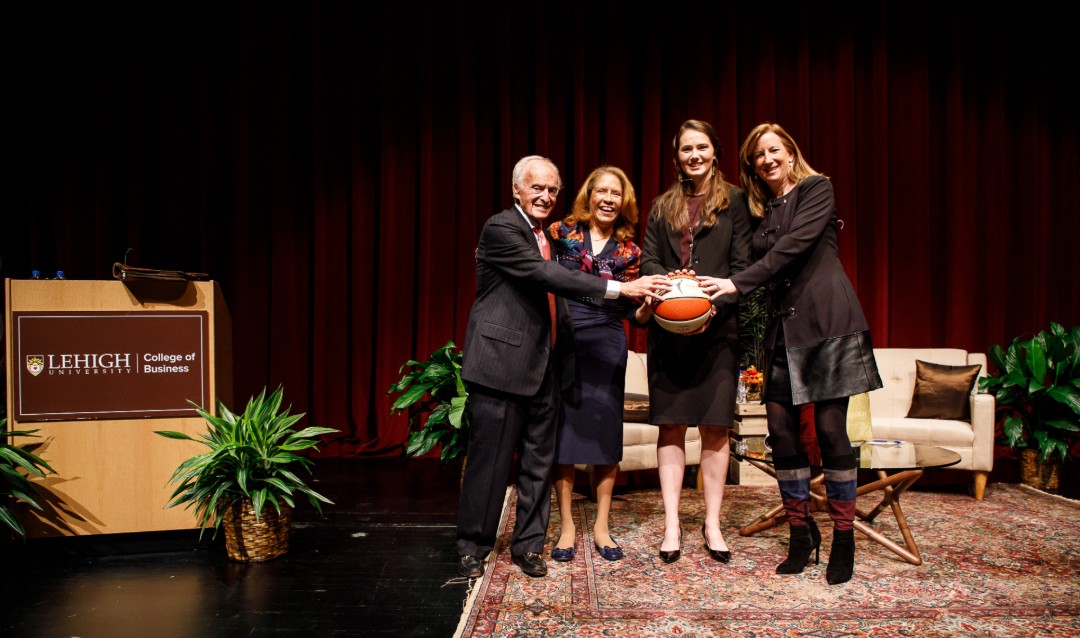 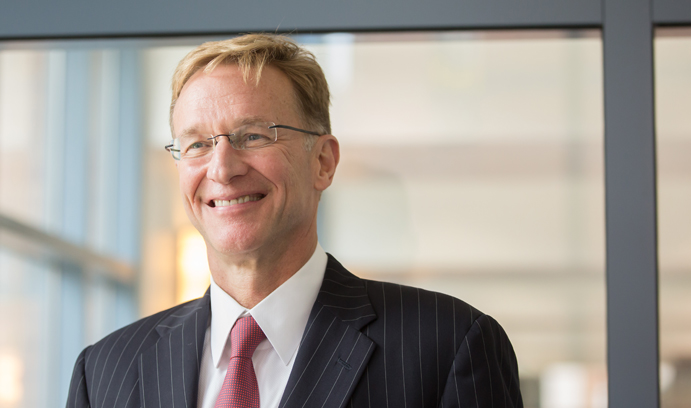 Wendell P. Weeks ‘81, chairman and chief executive officer of Corning Incorporated, is passionate about science and technology. He believes that passion serves him well in his role as CEO.